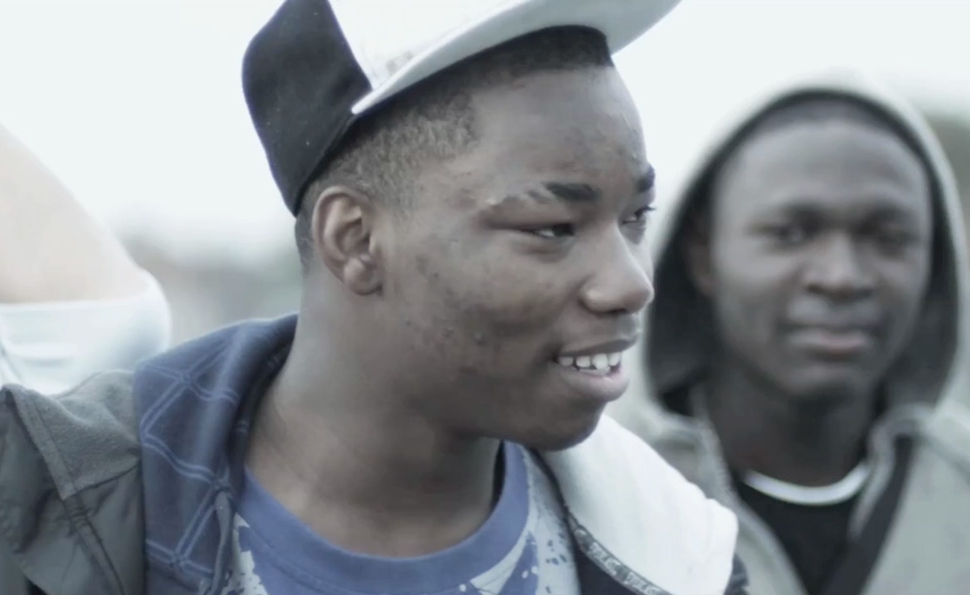 British filmmakers Luke Seomore and Joseph Bull—known collectively as “Institute For Eyes”—have been combining documentary and poetic abstraction in music videos, installations, and their 2009 feature film Isolation, which garnered praise from politically engaged director Ken Loach. On February 15, 2010, Institute For Eyes spent a day filming teenagers in the East London borough of Barking & Dagenham, where Bull grew up. In “Solace,” these kids goof around and rag on each other in slow motion, while Seomore’s spacey, sometimes intentionally abrasive music plays, occasionally interrupted by recordings of the same teens talking about friendship, violence, their aspirations, and the freedom they felt when they were little.

Via e-mail, Seomore told The Dissolve that the interviews were recorded later, so the subjects would be more natural in front of the camera. “If we recorded a voiceover [on that day], they would be analyzing their thoughts too much,” Seomore wrote. “We wanted their behavior to be instinctive.” He adds that he and Bull were “interested in capturing body language, breaking the distorted media depiction of ‘gang culture’ and aggression.” To that end, “Solace” observes the casual playfulness of teens being teens, paying special attention to their fashion—one of the major ways young people forge their identities—while defining them as individuals even further through their earnest musings on life in England. The result is a stirring evocation of youthful optimism and camaraderie, set against the hard concrete of council flats.

Iranian poet Forough Farrokhzad may be best known to cinephiles for her poem “The Wind Will Carry Us,” referenced in Abbas Kiarostami’s 1999 film of the same name. But before Farrokhzad was killed in a car crash in 1967—at age 32—she made a short documentary that many students of Iranian cinema consider a seminal work, which inspired a generation of filmmakers. “The House Is Black” was shot in a leper colony in 1962, and it takes an unflinching look at its subjects’ decaying, fly-covered faces and bodies, while also showing them as ordinary people, playing games, attending school, and enjoying the everyday rituals of a society. The film was made in part to call attention to the lepers’ plight, informing viewers that their condition is medically and therapeutically treatable, urging more compassion and early intervention toward people who suffer primarily from being poor. (“There is no shortage of ugliness in the world,” the opening narration goes, over a black screen. “If a man closed his eyes to it, there would be even more.”)

But there’s a secondary purpose to “The House Is Black,” revealed through Farrokhzad’s quotations from the Bible and the Koran, and her impeccably composed shots of human figures and the spaces they inhabit. “I thank you, God, for creating me,” one of the younger lepers says in class, where the teacher actively encourages his students to count their blessings. Farrokhzad doesn’t downplay the despair of her subjects’ lives; at times, “The House Is Black” can seem like a deep wallow in misery, like Alain Resnais’ “Night And Fog” or Georges Franju’s “Blood Of The Beasts,” two historically important shorts that Farrokhzad’s film compares well to. But this documentary is also about the world as it is, with Farrokhzad implying that there’s beauty even in the mire, because it’s all divine.