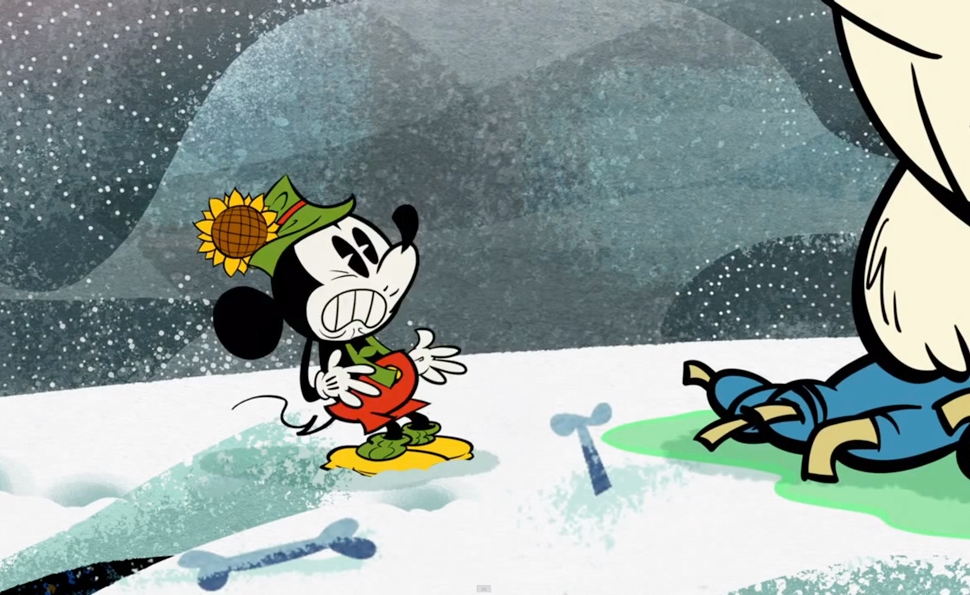 Two cartoons reveal the many faces of Mickey Mouse

In 2009, The Disney Channel debuted a series of shorts dubbed BLAM!, which cut classic Walt Disney cartoons down to 90 seconds of pure slapstick, and added a “bro” narrator and instant replay of the more violent gags. So the bar was already pretty low when Disney announced it had commissioned a new series of Mickey Mouse shorts to begin airing this summer. The new cartoons—supervised by Genndy Tartakovsky’s cohort Paul Rudish—do much better than just improving on BLAM! In a promotional video for the shorts, Rudish says he wanted “to revisit that place where Mickey was the most fun,” so he and his team have gotten away from the domesticated, suburban Mickey and gone back to the puckish adventurer who gets into trouble around the world, then escapes through a combination of pluck and luck. The new Mickey is like a combination of Floyd Gottfredson’s newspaper-strip iteration, the Mickey from Disney’s black-and-white cartoons, and a character from Craig McCracken’s Powerpuff Girls (which employed both Tartakovsky and Rudish).

“Mickey Mouse In Yodelberg” has a lot in common with the anything-goes Mickey cartoons of the late 1920s, when Mickey would sometimes pull off his ears and scalp as though they were a cap. It also has a lot in common with the coarser, wackier humor of some of the Disney, Nickelodeon, and Cartoon Network shows that the short’s co-writer/director Aaron Springer has worked on in the past (including Gravity Falls, SpongeBob SquarePants, and Dexter’s Laboratory). As Mickey tries to make his way gingerly up an avalanche-prone mountain to be with his gal Minnie, he encounters belching pigs and a snot-nosed Yeti, and distracts cuckoo-clock birds by scattering sunflower seeds across the snow. The pace is quicker and the gags more absurd than in the classic Mickey cartoons—it’s closer in tone to the old Goofy shorts, which tended to be more playful—but Springer and Rudish are true to Disney’s legacy of stunning, fluid design, as when the patchwork backgrounds give way to live-action footage of tumbling snow. And when the Yeti lowers his roar to a whisper to avoid getting buried, it’s a joke that isn’t particularly Mickey-like, but is funny enough to make this entire character revamp feel like it’s on the right track.

Between 1935 and 1937, Walt Disney Studios produced 25 full-color Mickey Mouse cartoons and a slew of Silly Symphonies shorts, all while preparing to make its first feature film, Snow White And The Seven Dwarfs. The 1936 Mickey short “Thru The Mirror”—seen here as part of the 1956 Disneyland episode “The Plausible Impossible”—extends Walt Disney’s own career-long infatuation with Lewis Carroll’s Alice In Wonderland, showing Mickey dreaming of a world where he’s been reduced to miniature size, and is being threatened by an army of anthropomorphic playing cards. Disney’s Carroll fandom was always one of his more inexplicable traits, given that Carroll’s fantasies typically had more bite than Disney’s. And by 1936, the anarchic spirit of the black-and-white Mickey shorts was starting to give way to the tamer, sweeter Mickey that would become the norm by the 1940s. Yet “Thru The Mirror” fits the different sides and eras of the Disney aesthetic, in that there’s a softness about the film as well as a wildness. When Mickey meets a talking telephone and skips rope on its mouthpiece-cord, it’s a case study in how the world of Mickey Mouse was once crazily unstable, while Mickey’s delighted smile exemplifies a character who’s less edgy and more adorable than he once was. It’s almost as though “Thru The Mirror” shows the new Mickey taking a trip back to the place where he used to live.