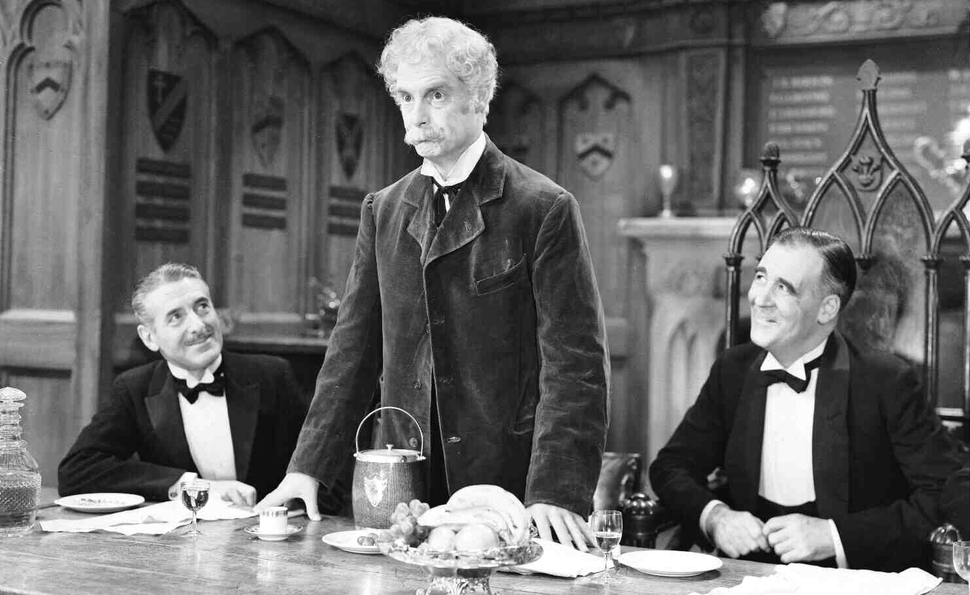 One of the hardest things for an actor to do is convincingly portray a character over a period of decades, from young adulthood to old age. Good makeup (and/or computer enhancement, nowadays) can help, and really awful makeup can hurt, but that’s all meaningless unless there’s an accompanying internal transformation that doesn’t feel like a young person’s exaggerated idea of infirmity. As great an actor as Orson Welles was, for example, he couldn’t quite pull off Charles Foster Kane at 50 and beyond—the playacting is visible. (Since Welles came from the theater, that probably didn’t bother him much. He even allowed Joseph Cotten to push Old Man Jed toward outright “eh, sonny?” caricature.)

That’s the main reason I can’t support the AMPAS’ choice of Robert Donat for 1939’s Best Actor—a choice that even Danny Peary, in his book Alternate Oscars (which inspired this column), declined to second-guess. In the role of British cinema’s most iconic and beloved teacher, Donat projects a winning combination of ardor, shyness, rectitude, loneliness, and compassion that makes the character impossible not to love. For my curmudgeonly taste, that itself is a bit problematic: Like Dead Poets Society’s John Keating, Charles Chipping is idealized to the point where he threatens to become uninteresting, despite his intense likability. (Keating isn’t Dead Poets Society’s protagonist—Robin Williams should have been nominated in the Supporting Actor category—which makes it less problematic in that film.) The role as conceived is too baldly sentimental to allow for true magnificence. Donat is much more impressive in Hitchcock’s The 39 Steps, for which he wasn’t even nominated, mostly because three of the five slots that year went to actors from Mutiny On The Bounty.

But the real problem is that Goodbye, Mr. Chips requires Donat, who was 34 at the time, to create the illusion of Chips’ complete journey through life. The performance encompasses 63 years, from age 20 to age 83, and while Donat looks faintly ridiculous once Mr. Chips hits 60 or so, with hair and mustache seemingly borrowed from Mark Twain, that isn’t a deal-breaker. Donat falls into the standard actor’s trap, though. He makes the older Chips a fundamentally different person, with a quavery, almost falsetto voice and physical mannerisms that would be perfectly suitable to convey “elderly” in a game of charades.

Since I’m surely alienating plenty of folks with this assessment anyway, let me take it all the way: I am not being flippant or cute when I contend that Johnny Knoxville plays a more believable old man in the trailer for Bad Grandpa. And that’s precisely because Knoxville isn’t trying so hard to project frailty. (Though we’re talking about a two-minute trailer here; who knows what he does in the actual film.) He’s just himself, but as an old man. Few actors seem to have the confidence to attempt that. They always want to disappear into senescence, and wind up destroying any sense of character continuity. Here, Donat’s choices make the title Goodbye, Mr. Chips literal in a way that was entirely unintended. 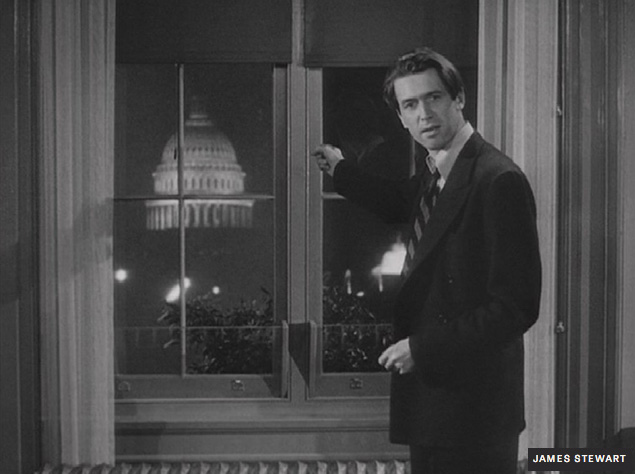 When comics do impressions of James Stewart, they always emphasize his folksy qualities. That’s understandable: It’s the most instantly recognizable aspect of his personality, and also the funniest, and they’re trying to get laughs. But perhaps no American actor has ever been greater at portraying utter, soul-shredding despair. Long before he began playing complex anti-heroes for Alfred Hitchcock and Anthony Mann, Stewart tapped into his dark side on a regular basis. His best-known performance, in It’s A Wonderful Life, pushes him not just to attempted suicide, but to the wish that he’d never existed at all. Mr. Smith Goes To Washington, likewise, is an inspirational saga that earns its uplift the old-fashioned way: by nearly destroying the protagonist first, so that’s he’s barely a shell of a man. Stewart is terrific from start to finish, but he isn’t doing anything out of the ordinary for the first hour or so—just his standard impassioned aw-shucks routine, which is more glad-making than civilization deserves.

But Smith’s filibuster gives him the opportunity to dig alarmingly deep. The speech itself is plenty rousing, and beautifully delivered. Stewart had the magical, almost miraculous ability to take words that would seem unbearably preachy coming from almost anybody else and make them sound like plainspoken truths. What makes this performance one for the ages, though, is what happens at the end of the speech, when Claude Rains’ corrupt Senator Paine drags in 50,000 telegrams from Smith’s constituents demanding that he yield the floor. Rifling through them, unable to believe what he’s seeing, Smith hits an emotional rock bottom that rivals Job’s. Hope dies, visibly, on Stewart’s face, and Capra gives him an extraordinary close-up as he turns and says, in a hoarse whisper, “I guess this is just another lost cause, Mr. Paine.” And then he starts up again anyway, in a show of quixotic conviction so thrillingly desperate that even a certified curmudgeon like me can’t help but get weepy. When Paine runs out of chambers afterward, it almost seems plausible that he’s planning to rush back and present Stewart with the Oscar right there in the movie itself. 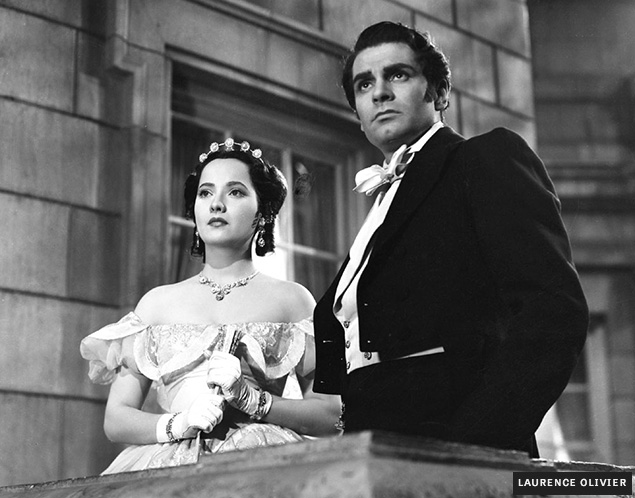 Neither organization was formed until decades later, so as usual, I’ll use this space to briefly discuss the other Oscar-nominated actors. It’s hard to find scuttlebutt from 74 years ago, but I’d guess that the favorite that year might have been Clark Gable for Gone With The Wind. (Vivien Leigh did win.) His Rhett Butler is scarcely distinct from his Peter Warne in It Happened One Night, or his Dennis Carson in Red Dust; that isn’t much of a liability, though, since the role as written conforms remarkably well to the Clark Gable persona. (Even the name “Clark Gable” would suit the character perfectly.) And he adds a subtly smutty undertone that nicely counteracts the onslaught of decorum. Rhett is meant to pierce that anyway, but I wonder whether Margaret Mitchell was taken aback by, for example, the way Gable leers down at Scarlett’s décolletage for a split second when he says, “I hope to see more of you.”

By (extreme) contrast, Laurence Olivier’s Heathcliff in Wuthering Heights feels stiff and formalized. I confess that I’ve never been a fan of William Wyler’s adaptation, and consider Emily Brontë’s novel all but unadaptable. (It’s significant that even the recent Andrea Arnold version jettisons the book’s entire second half, as if it were a simple romance.) Even allowing for that bias, however, Olivier is just too controlled an actor to play Heathcliff. He’s all sonorous bark and no bite, which makes him seem eminently resistible. In fact, if I had to name a performance I would avoid showing a kid who’s expressed an interest in giving classic movies a try, this would be the one—not because it’s bad (Olivier has many fine moments), but because it so embodies the stereotypical idea of fusty old-time Hollywood acting, which few classic performances actually bear out. Somebody who started here might well never continue. Show ’em some Jimmy instead.

Finally, there’s Mickey Rooney, who was nominated at age 19 for Babes In Arms, one of the umpteen Mickey Rooney and Judy Garland “let’s put on a show!” musicals. He’s totally Mickey Rooney in it. (He even plays a character named Mickey in this one.) I’m all for recognizing ostensibly “lightweight” comedic performances, and this is probably the best case for Rooney that one could make, but even Garland would likely be little revered today had this series of mildly amusing, almost interchangeable pictures been her sole legacy, as it more or less is for Rooney. (Throw in Andy Hardy, which is the same basic idea.) Deanna Durbin has her fans, too, but she wouldn’t likely come up in a conversation about any given year’s greatest performances. Though you never know with a column like this one, because here comes... 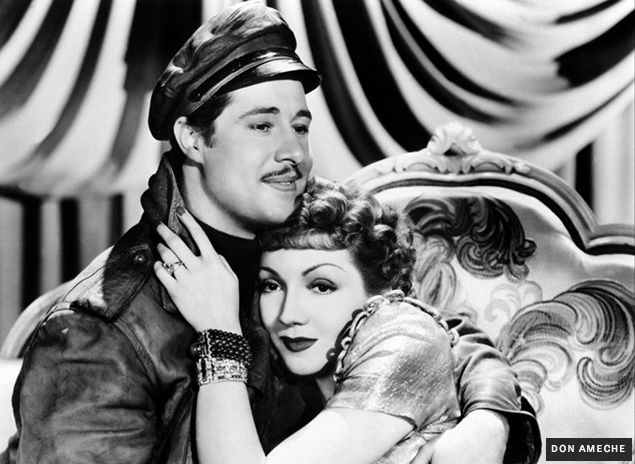 Don Ameche finally won an Oscar late in life for Cocoon, and those not well versed in film history may know him exclusively as an old man, since none of the popular films he starred in at the height of his fame wound up as part of the Cinephile 101 canon that’s frequently screened and/or taught. (His work in the title role of The Story Of Alexander Graham Bell made “the Ameche” slang for “the phone” for a while, but try to find someone who’s seen that film today. I never have, and I’ve seen more than 7,000.) But he was wonderfully breezy in his heyday, and never more appealing than in Mitchell Leisen’s vastly underrated Midnight (co-written by Billy Wilder), in which he plays a Hungarian-born cab driver named Tibor who poses as a baron to win the affection of a showgirl, Eve (Claudette Colbert), who’s posing as a baroness. (It’s way more complicated than that, but you’re better off experiencing the ludicrous details for yourself.)

As Tibor, Ameche possesses a degree of self-confidence that borders on smarmy without quite crossing the line, and it’s enormous fun to see how close he can get. Early on, before they’ve each taken on their new roles, Tibor offers to let Eve, who’s temporarily homeless, sleep in his apartment; when she declines, clearly feeling that he’s on the make, he refuses to take no for an answer, forcing her to flee his cab when he stops for gas. Baldly described, that sounds predatory, but Ameche plays Tibor with such unaffected, cheery candor that he never remotely comes across as a threat. Later, he unexpectedly shows up and forces himself into a nutty scheme that Eve’s involved in, pretending to be her husband, and many of the subsequent laughs are generated from our foreknowledge of how blithely stubborn this man can be. It’s one of those performances that coasts along so smoothly as to seem effortless, but that actually requires an exceptional degree of charm, poise, and precision timing. George Clooney is frequently called the modern-day Cary Grant, but I mean no disrespect when I suggest that he’s really the contemporary Don Ameche. Clooney has admittedly done a better job of picking future classics than Ameche did; at the same time, though, Midnight’s relative obscurity is tough to fathom. In any case, Ameche’s performance is one I would recommend to that hypothetical curious youngster. It’s potentially habit-forming.