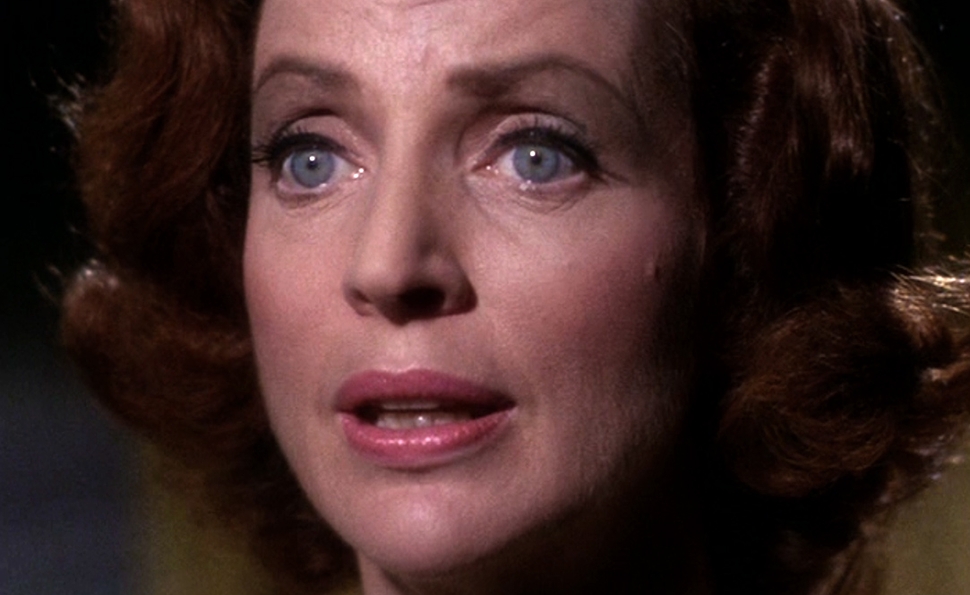 How to win an Oscar in five minutes and 40 seconds

I’m not sure who went to the trouble of timing every single Oscar-winning performance in history, but Beatrice Straight’s is cited by multiple sources as the shortest ever, occupying a mere five minutes and 40 seconds of screen time. Essentially, she won for a single scene (taking up roughly four of those minutes), in which William Holden’s TV executive, Max Schumacher, confesses his affair with a colleague (Faye Dunaway), and Straight, playing his wife, reads him the riot act regarding marital loyalty and respect. As hell-hath-no-fury showcases go, it’s definitely a corker, while also being dynamic enough to let Straight demonstrate impressive range, as she eventually circles back from anger to a degree of tender, wistful resignation. Still, if you’re going to hand someone an Oscar for what amounts to a cameo appearance, it had better damn well be one of the most astounding concentrated efforts of all time, and I doubt this scene, impressively volatile though it is, would make many desert-island lists.

While I’m too young to know for sure, my guess is that many people had been waiting a lifetime to see an adulterous spouse called on the carpet like this—that many older AMPAS voters, to borrow a phrase from another Network character, were mad as hell and weren’t going to take it any more. On the other hand, it may just have been one of those process-of-elimination deals, as the other four nominees were 1) the woman who won the previous year (Lee Grant, for Voyage Of The Damned; she won for 1975’s Shampoo); 2) a horror-movie murder victim (Piper Laurie, for Carrie); 3) playing an equally minor character (Jane Alexander, for All The President’s Men); and 4) 14 years old (Jodie Foster, for Taxi Driver). Though that last disqualification didn’t faze one of the major critics’ groups, as we’ll soon see. 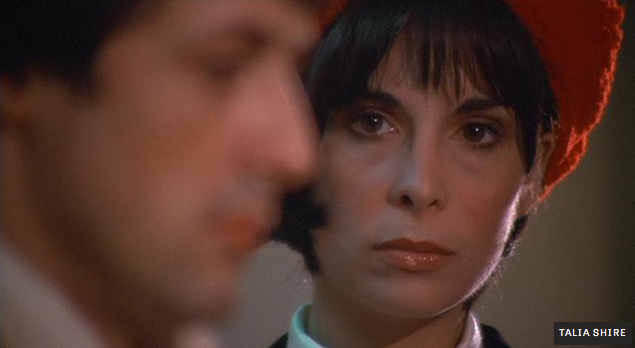 Like nearly everything else about Rocky, Talia Shire’s performance as Adrian has been retroactively compromised by the sequels. Where the other characters got pushed toward caricature, however, Adrian was aggressively normalized, for lack of a better word. Which is too bad, because the original incarnation of the character borders on the pathological, with Shire delivering as fearlessly extreme a performance as those her nephew, Nicolas Cage, would soon deliver. (For those who don’t know, she’s also Jason Schwartzman’s mom.) Granted, Adrian does come out of her shell eventually, even getting one of those clichéd transformative moments in which the man removes her glasses and lets her hair down. But for most of the original film, Shire plays her as much more than just shy or reserved—she’s so beaten down by life that she can barely even keep her head level most of the time. The movie gives her one big emotional explosion, directed at her brother Paulie (Burt Young), but she’s at her best when she looks as if she’s trying to will herself into being invisible, unable to believe someone is interested in her. (By Rocky III, on the other hand, she might as well be playing Connie Corleone.) AMPAS placed Shire in the lead category, where she lost to Faye Dunaway (Network won three of the four acting prizes that year); she might have had a better shot at the trophy in Supporting Actress, but we’ll never know. In any case, it turned out to be her last really significant role, unless you want to count stuff like Windows, the only film directed by famed cinematographer Gordon Willis. 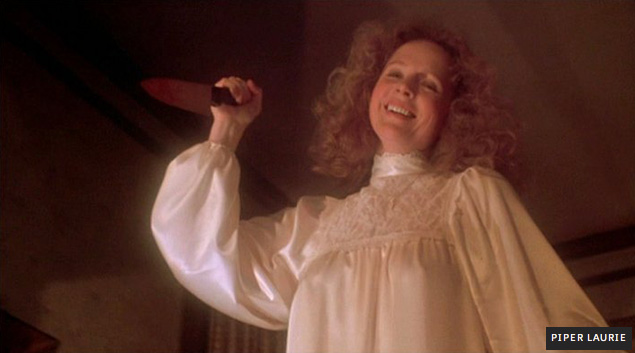 LAFCA was founded in 1975, but didn’t start giving awards in the supporting categories until two years later. So let’s use this space to talk about Piper Laurie, since we may soon be discussing Julianne Moore’s chances in the same role. It’s exceedingly rare for actors to be nominated for horror movies—the next one in this category was Anne Archer for Fatal Attraction, 11 years later, and that’s using a loose definition of “horror”—but Laurie was an unusual case. She was also nominated for the previous film she’d appeared in, which was The Hustler, believe it or not. Between 1961 and 1976, Laurie worked exclusively on television, and not even that frequently. So Carrie was a major comeback for her, and while I’m (again) too young to remember whether that was a big deal at the time, it certainly must have resonated for the members of AMPAS’ sizable actors’ branch. The role of Carrie’s mother doesn’t allow for much subtlety, and all Laurie really has to do is radiate perverse piety. In the last few seconds before she’s, uh, dispatched, she wears a creepy, beatific smile while stalking the already-wounded Carrie with a butcher knife, which is generically effective, but not exactly taxing. While Carrie is among my favorite Brian De Palma films, I tend to run more cold than hot on his work, and his clumsy way with actors is a big part of the reason why. (Yes, there are exceptions, including Sissy Spacek). My interest in the forthcoming Carrie remake is low, but I am curious to see whether Moore, working with a female director (Boys Don’t Cry’s Kimberly Peirce), can find a way to make Margaret White less of a cardboard religious wacko. 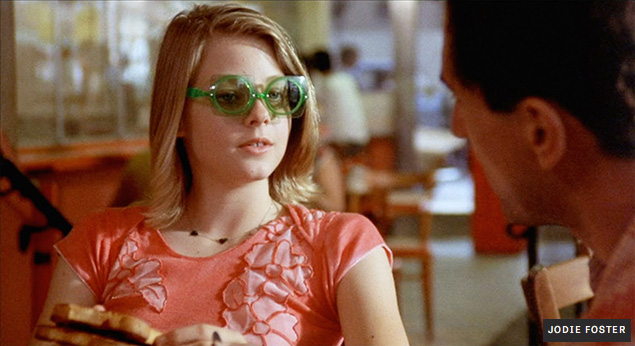 Finally, somebody states the obvious. If I were in a contrarian mood, I might try to make a case that Foster is even better in Bugsy Malone, released the same year. Certainly, that film provides more blatant and arresting evidence of her ridiculous talent, being entirely populated by ordinary child actors. (It’s like watching Usain Bolt race a bunch of people who need crutches to walk.) But holding your own against Robert De Niro at his peak, as a teenager, is the stuff of legend. What’s most striking about the famous restaurant scene, in which Travis attempts to talk Iris out of prostitution, is how intently she listens to him, even when Iris is making a show of not paying any attention. (In an approach that Brad Pitt later adopted as his signature move, she spends much of the scene preoccupied with food, methodically spreading jam on toast, then crunching away at the resulting sandwich.) As Keith Phipps noted in his Career View piece on Foster, she’s a kid playing at being a jaded adult, and the way Foster shifts back and forth between studied disaffection and abrupt jolts of adolescent goofiness (“I don’t know who’s weirder, you or me,” she tells Travis at one point, laughing) makes what Travis later does on her behalf seem more credible than it might have otherwise. Frankly, on paper, the role seems unplayable; it’s hard to imagine it working in the hands of other reported potential candidates, including Melanie Griffith and Carrie Fisher. (Both were over 18 at the time.) Foster made Iris indelibly incongruous—a streetwise innocent. 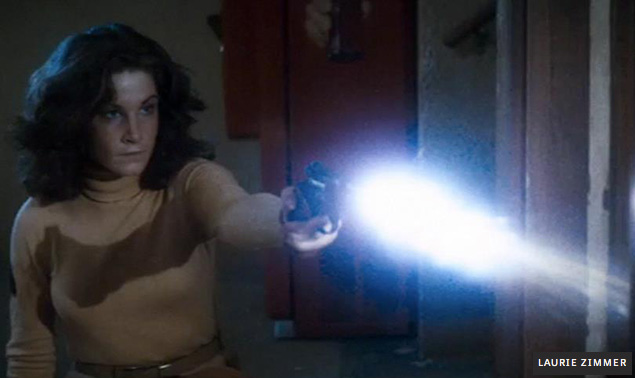 Elsewhere in this column, I’ve talked about degree of difficulty, but there’s also something to be said for knowing when to keep things blissfully simple. Assault On Precinct 13 isn’t likely the first movie to leap to mind when thinking about great acting—it’s a low-budget action movie, with the sort of amateurish cast that such a production can afford and attract. But John Carpenter deliberately conceived Precinct 13 as an urban version of Rio Bravo, and Laurie Zimmer, as precinct secretary Leigh (named after Rio Bravo screenwriter Leigh Brackett), plays the prototypical Howard Hawks female: tough but feminine, with a no-bullshit manner that isn’t aggressive so much as emotionally efficient. The first time I saw the movie, I thought she was wooden—she has a sleepy look much of the time that can register as boredom, especially in the context of a scenario that has her and everybody else in nearly constant danger.

On subsequent viewings, though, I’ve grown to cherish Zimmer’s weirdly robotic anti-charm, if only for the degree to which it upends expectations about the presence of a secretary surrounded entirely by cops and cons. She plays perfectly opposite Darwin Joston’s sardonic Napoleon Wilson, but my favorite moment comes when she faces off against Wells (Tony Burton), one of the prisoners-in-transit who gets caught up in the siege, who’s pointing a gun at her. After calmly inviting him to go get himself killed, if that’s what he wants, she finally notices that his gun isn’t loaded, yet she seems more annoyed than relieved—sorry to have wasted the energy. Any sort of traditional emoting would have ruined the dry comedy; Zimmer plays it not unlike how Clint Eastwood would play it, which is just bizarre enough to work beautifully. Not a traditionally expert performance, but cherishable all the same.