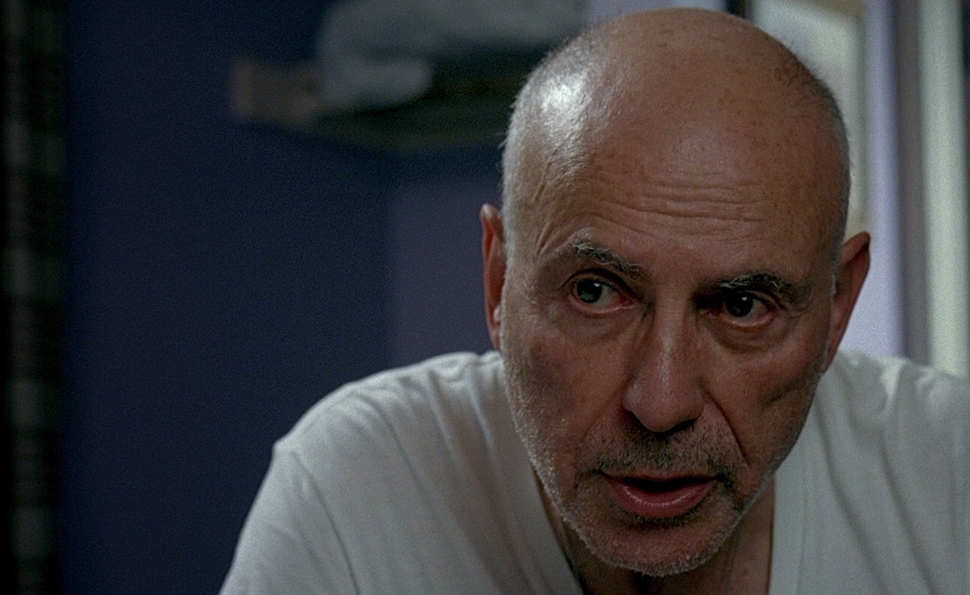 When Arkin cursed his way to an Oscar

Years ago, when I first started reviewing movies, I railed against a phenomenon I dubbed the Fallacy Of The Profane Granny. It applied to various lazy comic formulae that were content merely to serve up a single mundane incongruity as if it were a never-fail gutbuster, e.g. an old lady (or a little kid, or a Buddhist monk, etc.) who curses like a sailor. Alan Arkin’s performance as heroin-using, foul-mouthed Grandpa Edwin in Little Miss Sunshine is an almost literal embodiment of that fallacy—only the gender is off. When the Hoover family is driving to California, Edwin turns to silent Dwayne (Paul Dano) and announces that he’s going to give the kid some advice. Will it be grandfatherly? Of course not. “Fuck a lotta women, Dwayne. Not just one woman. A lotta women.” Who would have thought the old man to have so much cuss in him?

Thankfully, that isn’t the full extent of Arkin’s turn in this bizarrely overrated quirkfest. His scenes with young Olive (Abigail Breslin), who’s nervous about her upcoming pageant performance, find a solid emotional core, and he’s also inherently likable enough to spackle the role’s gaping holes with his own personality. For the most part, however, the screenplay has him on kooky-codger autopilot. This was unmistakably a career-achievement award, by way of apologizing for failing to honor Arkin decades earlier, when he startled viewers in films like Wait Until Dark and The Heart Is A Lonely Hunter. (Or, if you wanted to cite him for broad comedy, how about The Russians Are Coming, The Russians Are Coming or Catch-22?) Sure, AMPAS voters may have genuinely believed it to be the year’s finest performance—they obviously loved the film as a whole—but if so, we’d best start anticipating Johnny Knoxville’s statuette for Jackass Presents: Bad Grandpa. 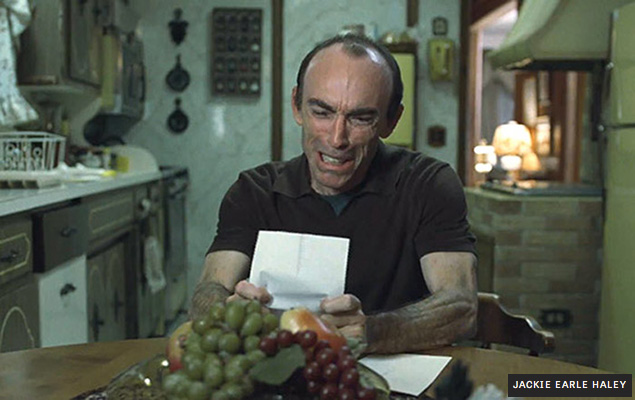 It wouldn’t be accurate to call this a career-achievement award, but there’s certainly a comeback element to Jackie Earle Haley’s acclaim. Having all but disappeared from the public eye following his success as a child actor (The Bad News Bears, Breaking Away), Haley campaigned hard for the role of creepy sex offender Ronnie McGorvey in Todd Field’s adaptation of Tom Perrotta’s novel. And while he does excellent work, to some extent, it’s the disjunction between his teenage cockiness and this haunted shell of a man that’s truly impressive. Little Children is another bad movie that was mistaken for a good movie: It treats the audience like little children, ramming its points home via barn-broad satire and omniscient voiceover narration. And there’s nothing Haley can do about unplayable scenes like the one in which he concludes a date with an adult woman (Jane Adams) by jerking off next to her in the car while looking past her at a swingset. (The scene is particularly egregious in that Ronnie seems not just normal earlier in the date, but empathetic; his instantaneous switch-flip to deviancy is typical of the film’s ham-handed approach.) But Haley handles Ronnie’s self-awareness about his pariah status in the community extremely well, and there’s a heartbreaking puppy-dog eagerness in Ronnie’s eyes when his mother (Phyllis Somerville) lists his good qualities while brainstorming a personal ad for him to place in the newspaper. He’s the best thing in a movie that doesn’t deserve such a thoughtful performance. 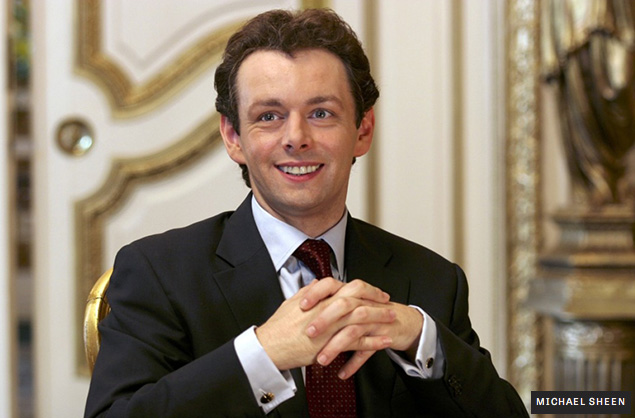 First things first: Even though this movie is called The Queen, not The Prime Minister, Sheen’s Tony Blair is a leading role, equal in dramatic stature to Helen Mirren’s role as the queen. Because he’s a lesser star, he was placed in the wrong category, as is so often the case. Second, and more controversially: Sheen gives The Queen’s best performance. I’ll double back to address Mirren in a future column (she’s totally fine), but Elizabeth II’s gradual thaw regarding Diana’s legacy isn’t nearly as compelling as Blair’s growing recognition, almost immediately after taking office, of the burden shouldered by those born into a life of stifling privilege and responsibility. As ever, Sheen is an uncanny mimic—he nails Blair’s hesitant half-smile and slightly staccato speech pattern, just as he later reproduced David Frost’s mannerisms—but he doesn’t stop at the surface. When Blair tells the Queen, “You’re more respected now than ever” following the debacle surrounding Diana’s memorial, Sheen manages to deliver the line in a way that sounds simultaneously sincere and insincere, conveying both his newfound personal respect and his awareness that what he’s saying is a lie. It’s a remarkable balancing act, transcending the usual celebrity-impersonation guff that Oscar voters eat up. Hence his absence from that year’s Supporting Actor (or Actor) nominations—though it was a very competitive year, what with Eddie “look, I’m actually trying” Murphy in Dreamgirls, Djimon Hounsou in Blood Diamond (I skipped that one), and the Boston-accented barnburner I’ll be praising to the skies in the next paragraph. 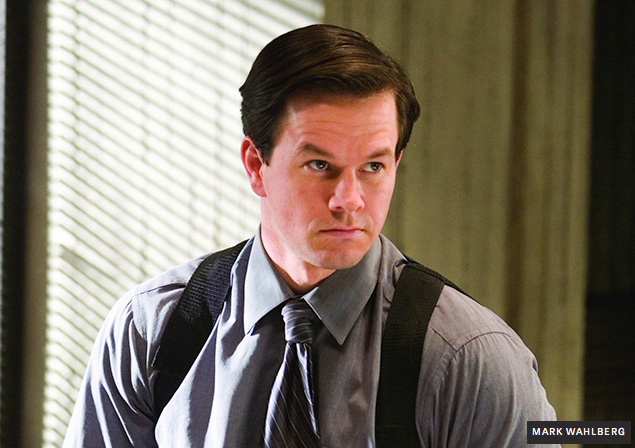 Boogie Nights established Mark Wahlberg as a real actor, but the role of Dirk Diggler was sufficiently dim-bulb that it wasn’t yet clear whether the former rapper and underwear model had any range. As Staff Sgt. Dignam in Martin Scorsese’s remake of Infernal Affairs, Wahlberg is arrestingly anti-Dirk—a creature of pure, untempered hostility, sneering contemptuously at anything that wanders into his field of vision. It’s the most stylized performance in a movie that doesn’t exactly qualify as neorealism to begin with, and Wahlberg has enormous fun spitting out William Monahan’s most hard-boiled dialogue. (A quotation from Nathaniel Hawthorne elicits a fart noise, complete with one butt cheek lifted off the desk for emphasis, and the rejoinder, “What’s the matter, smart-ass, you don’t know any fuckin’ Shakespeare?”) It helps, in a weird way, that he plays most of his scenes next to (as opposed to opposite) Martin Sheen’s Capt. Queenan, who maintains an even keel at all times and seems to tolerate Dignam as he would someone with Tourette’s. Dignam functions as his superior’s id, saying all the things a respectable cop wouldn’t; he’s the perpetual bad cop to Queenan’s good cop, except there’s no indication that Dignam is putting on an act. And the role perfectly suits Wahlberg’s gifts, which are much more those of an eccentric character actor (see also I Heart Huckabees) than those of the generic hero he usually plays. There’s no misguided attempt to signal the caring human being beneath the brusque manner, no effort at a character arc. He just takes this abusive monomaniac and runs with him, to riveting effect. 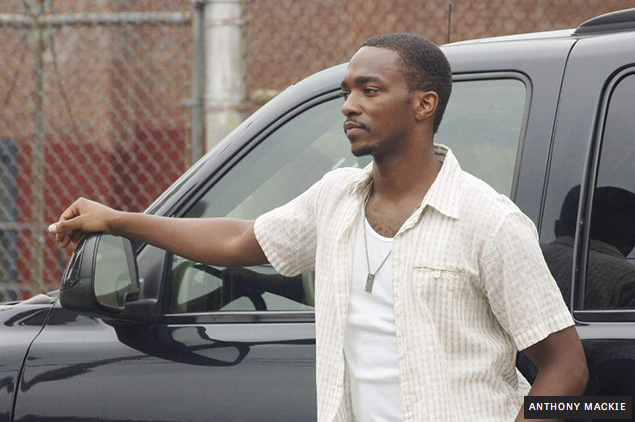 When people talk about The Wire’s influence, they mostly refer to other TV dramas, but its reach goes much further when it comes to depictions of drug dealers. Half Nelson, in which a crack-smoking teacher and basketball coach (Ryan Gosling) befriends a troubled young girl (Shareeka Epps), was made shortly after The Wire’s third season—the one centered on “Hamsterdam,” a quixotic one-man attempt at legalization—and the film takes a similarly even-handed view of its principal pusherman, Frank, played with beautifully relaxed charisma by the perpetually underrated Anthony Mackie. In fact, it isn’t always clear which man makes a better surrogate father for the kid, which is a testament to Mackie’s ability to deflect cliché at every turn, portraying Frank as a complex individual who just happens to be in a dangerous, illegal, unforgiving line of work.

His reaction when Gosling’s Mr. Dunne shows up at his house for a civilized confrontation is priceless, largely because Mackie plays Frank, believably, as someone who’s much more amused than offended or threatened. Yet while he remains grounded, he’s still very much electric, with little currents of peevishness (one of them directed at a stray cat) occasionally breaking the placid surface. Mackie makes Frank one of those characters who’s seductive even to those who know better, which makes his scenes opposite Epps’ Drey all the more upsetting—if a level-headed adult has trouble resisting his silky-smooth line of bullshit, how can a 16-year-old girl? For whatever reason, though, Mackie has trouble getting noticed in a first-rate ensemble: Gosling, and to a lesser degree Epps, got most of the attention for Half Nelson, and it was Jeremy Renner who walked away from The Hurt Locker a movie star, even though Mackie, playing Renner’s less-reckless colleague, arguably had the more difficult role. (Mackie’s one big showcase part was in She Hate Me, which has the unfortunate distinction of being the nearly unanimous choice for the worst movie Spike Lee has ever made.) One day soon, the stars will finally align, and it won’t be one lone columnist extolling his virtues years after the fact.