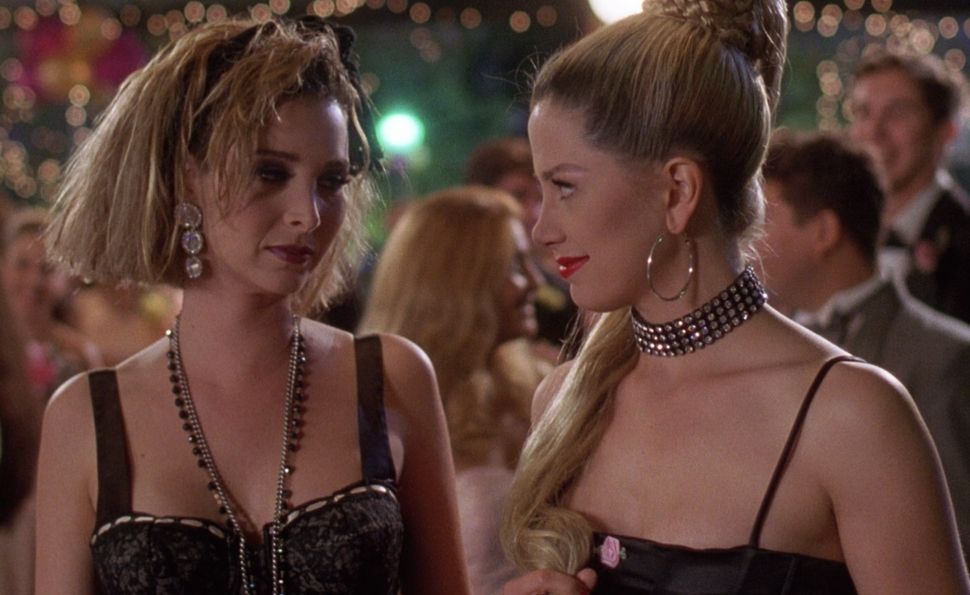 There are two sets of high-school sweethearts in Romy And Michele’s High School Reunion. There’s Christy Masters (Julia Campbell) and Billy Christianson (Vincent Ventresca): leaders of the so-called “A Group,” prom king and queen, and generally awful people. And there’s Romy White (Mira Sorvino) and Michele Weinberger (Lisa Kudrow): high-school outcasts, fashion plates, and the faux inventors of Post-It Notes. Both Christy/Billy and Romy/Michele have spent their post-high school years together, building on the foundation of what they started as teenagers. The difference between the two sets of sweethearts is obvious: Christy and Billy are a married couple (who, it turns out, aren’t very good at being married), and Romy and Michele are just—just—best pals.

But is that really so different? In the 1997 comedy, the most important relationship in Romy and Michele’s lives is the one they have with each other, and in spite of the film’s charmingly goofy trappings, underneath all the laughs is a forward-thinking, female-positive film that should have inspired a new generation of lady-centric features. Unfortunately, it didn’t.

A large part of Romy And Michele’s High School Reunion focuses on the central duo coming to terms with the true state of their lives. When they first decide to attend their 10-year high-school reunion, they’re positively jazzed to head back to Tucson and talk up their cool new California “lifestyle.” Leave it to a mostly benign survey to make them realize that their lives—bad job, no job, boyfriend-less, in need of a regular gym schedule—aren’t that awesome, and they best beef them up before setting foot at their reunion. The one thing they don’t need to change? Their friendship, which is exactly what guided them through a mostly lackluster high-school experience. 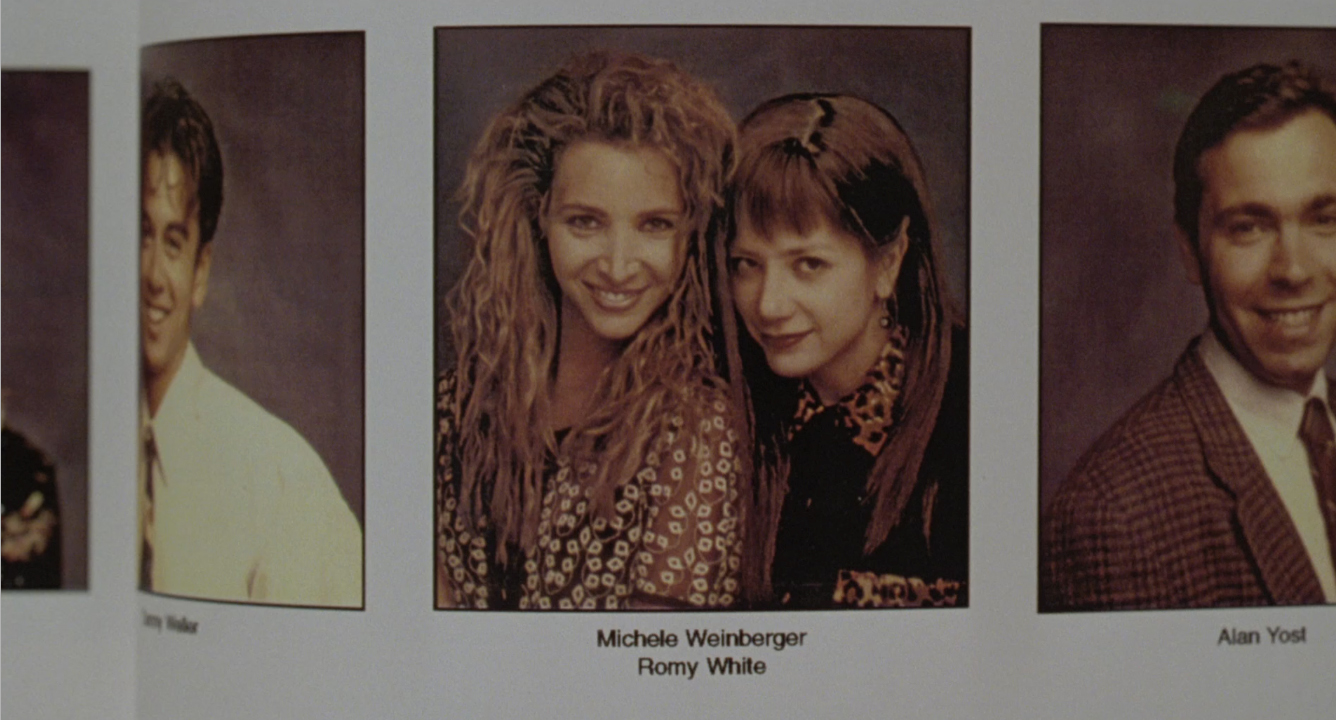 Men never figure particularly prominently in the narrative of Romy And Michele’s High School Reunion, or at least romance doesn’t, as the girls already have each other as platonic soulmates. They do have crushes and potential paramours, but those relationships never threaten to eclipse their bond.

In high school, Romy was hung up on Billy, who is credibly fashioned as an extremely good-looking guy with a major personality defect, one that comes into sharp relief by the time the girls arrive at the reunion. (It’s telling that when Romy finally decides to make her move on Billy at the high-school prom, it’s Michele who encourages her to do it, then picks up the pieces via a dance to Cyndi Lauper when the whole thing backfires spectacularly.) Michele, never boy-crazy, mostly spent her high-school years shunning the only guy who demonstrated an interest in her: dorky Sandy Frink (Alan Cumming). Neither crush works out, but Romy and Michele leave high school as bonded best pals, and that’s how they’re bent on returning a decade later.

The pair’s only major argument—set on a breezy Arizona freeway after they change into their “businesswomen” suits in a roadside diner—stems from a debate over who is smarter, cuter, and carrying them financially. It has nothing to do with men, and zero to do with romance. It’s a refreshing change from other films that ostensibly center on female friendships, features that view members of the same sex as somehow the enemy. (In Romy And Michele, Janeane Garofalo’s Heather Mooney mostly subscribes to this line of thinking, and even that worldview is altered by the film’s end.) There are mean girls in the film, like Christy Masters, whom Romy eventually, rightly dings as “a bad person with an ugly heart.” But they’re different animals than Romy and Michele, and their behavior is the bitter exception, hardly the rule.

A number of recent romantic comedies have pumped the cattiness up to nearly unbearable levels, using over-the-top plot movements to exaggerate the apparent threat of other women, while simultaneously diminishing the importance of strong female friendships. Competition dilutes affection until there’s nothing left but tainted memories, and occasionally a ruined wedding or two. Films like Bride Wars and Something Borrowed initially rely on strong female friendships to drive their narratives and emotions—in Bride Wars, Anne Hathaway and Kate Hudson play lifelong best friends, while in Something Borrowed, Hudson and Ginnifer Goodwin are paired up as best pals—but both films implode those once-essential friendships in service to romance.

The women of Bride Wars come to blows over competing wedding dates (through a terribly dunderheaded misunderstanding, the ladies schedule their weddings on the same day, then refuse to back down), eventually ruining each other’s weddings—you know, the happiest day of their life—and breaking each other’s hearts for good measure. That friendship ultimately survives, despite the lingering feeling that these two should not be allowed to be friends with anyone. (Terrifyingly, the film even hints that the pair will next compete in a new venue, as they’re both pregnant, with the exact same due date.) Bride Wars makes its audience feel bad, but it also makes them feel as if respectful, loving female friendships simply don’t make for good entertainment. But cattiness does! 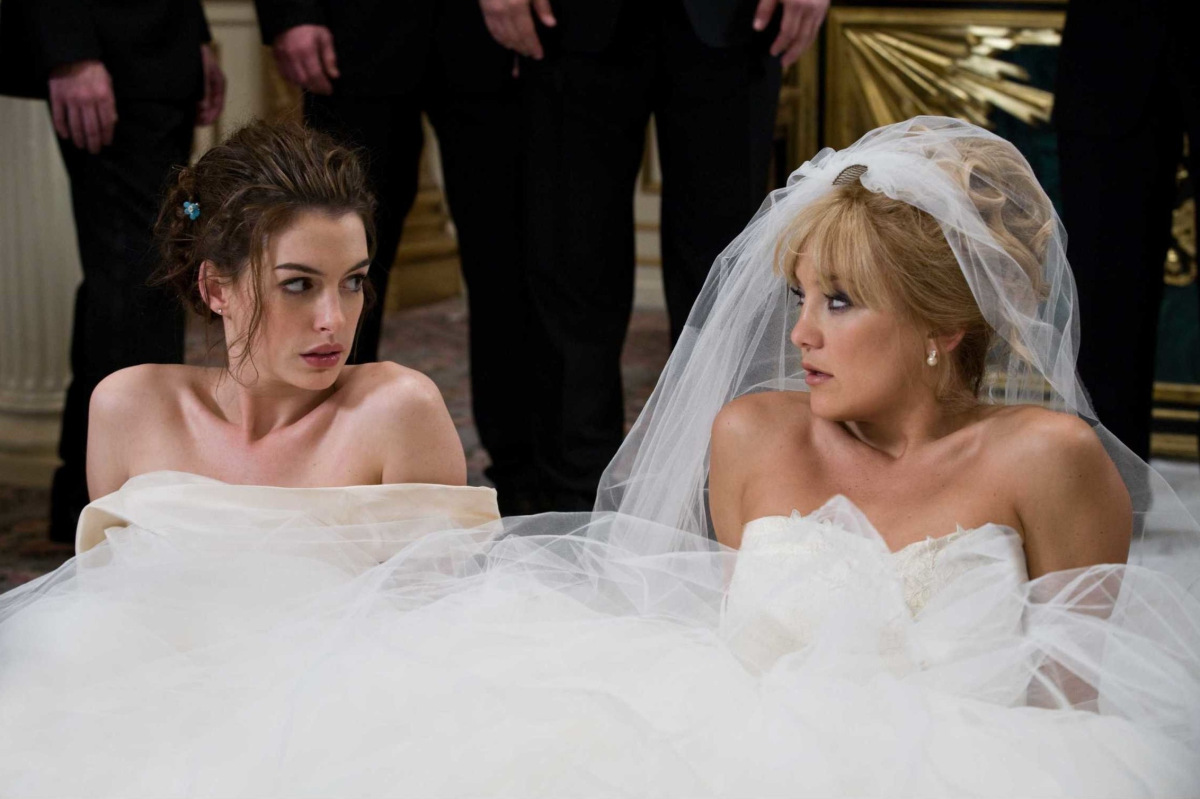 In Something Borrowed, best friends Darcy (Hudson, who somehow shot both these toxic films in a two-year span) and Rachel (Goodwin) fall out over something far more typical: a man. Yet the film, adapted from Emily Giffin’s bestselling book of the same name, is unable and unwilling to set up a love triangle built on confusion, emotion, and respect. Instead, the audience is expected to root for Rachel to abscond with Darcy’s fiancé, because Darcy is kind of a bitch.

Elsewhere, films like The Devil Wears Prada, Bachelorette, America’s Sweethearts, and even new classic Mean Girls have consistently beat down female friendships, imagining leading ladies who are all too happy to throw over professional allies, lifelong friends, actual sisters, and new buddies in service to something seemingly greater, like a hot romance or a cool job. For these stories, female friendships are simply a stepping stone to something apparently “better.”

Romy and Michele’s argument eventually tumbles into a dream sequence—one cooked up in Michele’s sleeping brain—that imagines how the reunion would play out if Romy and Michele entered it separately, still mad at each other, no longer best friends. Although the dream makes room for romance for both women, with Romy making out with a non-married Billy in a car (an acceptable high-school-rooted fantasy) and Michele reuniting with a surgically modified Sandy in the back of his massive limo, neither of those scenarios has a happy ending. Michele’s dream culminates with both women winning the totally-fake-but-also-great “Most Changed For the Better Since High School” Award (an actual medal), tying for the honor but unable to share it, and looking after each other with something approaching wistfulness.

By the dream’s end, Romy and Michele are elderly women who have spent entire decades apart—though, notably, they’re still with their dreamy dudes—and who continue to reel from the smash-up of their friendship. When Michele finally reaches out, Romy is on her deathbed, and still bent on winning their one argument. It snaps Michele awake immediately, as the worst thing she could ever imagine is being old and not being friends with Romy. It has nothing to do with an unfulfilling romance or a major heartbreak, it’s just that Michele’s life is incomplete without her best friend. 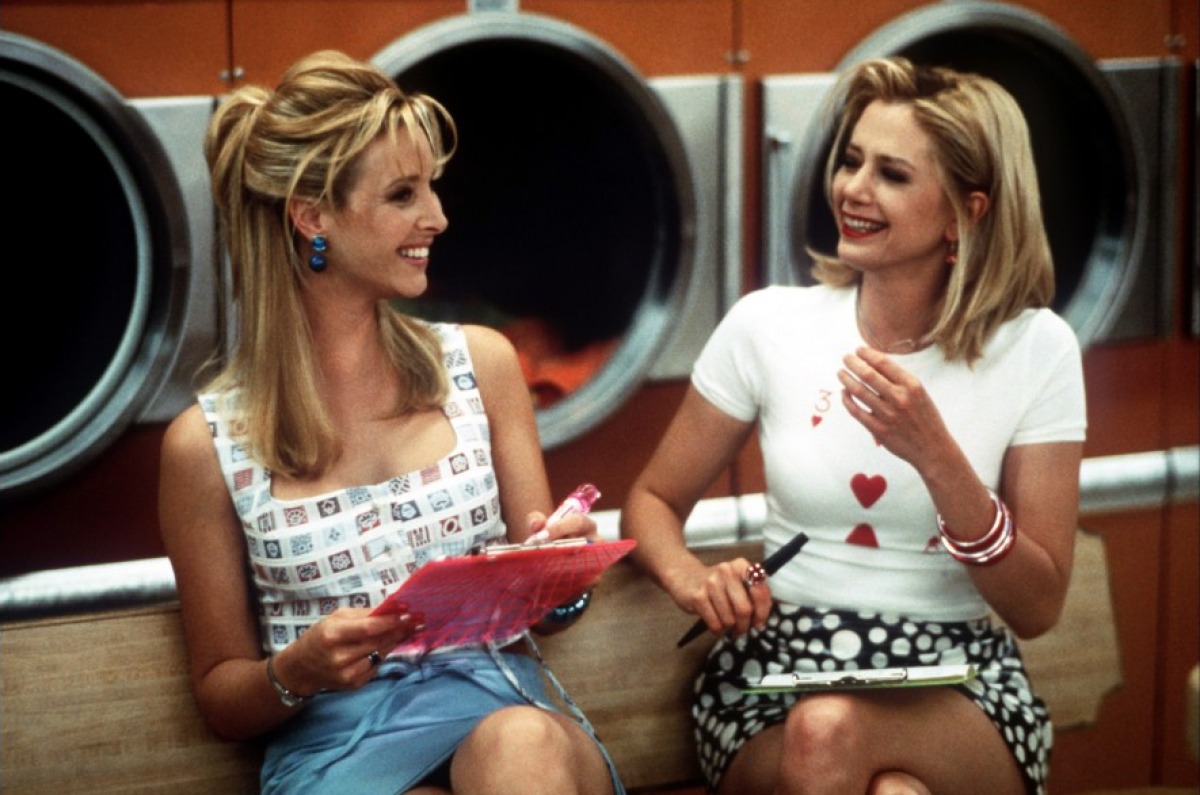 There’s a subgenre of films about women who bond over bad men, like Thelma & Louise and The First Wives Club. Those movies tend to steadily, subtly transform themselves into features like Romy And Michele’s High School Reunion, finding substance and value in the friendships that spring out of pain. The first Sex And The City film, based on a show that consistently managed to keep the friendships of four very different women as its centerpiece, twists that ideal, and is mostly about Charlotte, Samantha, and Miranda attempting to heal Carrie’s Big-broken heart. Still, the film is at its best when the four of them are all together, not when it splits them up to show them struggling with their different romances. The heart of that show was always friendship, not romance, and that’s where the subsequent films stumbled.

The final act of Romy And Michele’s High School Reunion might have a bit of romance to drive it—turns out Sandy really is rich, and still in love with Michele—but the girls’ friendship retains center stage, as Michele will only dance with Sandy if Romy can come too. And she does. If Sandy has a chance in hell with Michele, it’s not because he’s suddenly rich, it’s because he respects her relationship with Romy.

Romy And Michele’s High School reunion didn’t immediately spawn a new series of friendship-positive films, but nearly 20 years later, things are starting to look up, thanks to features like Frances Ha; For A Good Time, Call…; and Bridesmaids, all of which include romance while still focusing on female friendships. Each film was at least partially written by one of its female stars (Gerwig wrote Frances Ha alongside director Noah Baumbach, Lauren Miller wrote and starred in For A Good Time, Call…, Bridesmaids was penned by star Kristen Wiig and her close friend Annie Mumolo), stars eager to show the positivity, warmth, and respect of female friendships to a wider audience. All three films are uniquely satisfying, all three are extremely funny, and all three illuminate an entire subset of friendship so often disregarded in service to romantic drama or plain old ugliness. These are feel-good movies, the kind any girl and her best friend would love to see on the big screen.

By the final scene of Romy And Michele’s High School Reunion, Sandy is mentioned in name only—despite sharing a well-deserved kiss with Michele before the trio exits that awful reunion in his swanky chopper—and the girls are hard at work running their own clothing store in California. Even Heather Mooney stops by to pick up a Romy and Michele design, finally (albeit a teensy bit grudgingly) a part of the girls’ friendship. Fittingly enough, they chirp, “Have a Romy and Michele day!” at their customers. Hollywood itself might want to take that message to heart.

This ends our Movie Of The Week look at Romy And Michele’s High School Reunion, which Genevieve’s kicked off with a Keynote on how Romy And Michele’s slacker vibe and stoner-like comedy, and Rachel and Keith continued in the Forum by discussing different responses to its shaggy comedy. This also wraps up Buddy Comedy Month: Next week, we move on to a very different pair of friends in Paul Thomas Anderson’s The Master, just in time to consider how its Scientology-inspired storyline compares with the actual Scientology information currently abounding on screens.

But before we let Buddy Comedy Month go, here’s a reminder of what you may have missed: Our Movie Of The Week looks at Frank Tashlin’s Artists And Models; the original The Odd Couple; the star-making Eddie Murphy vehicle 48 Hrs; and the De Niro/Grodin team-up Midnight Run.