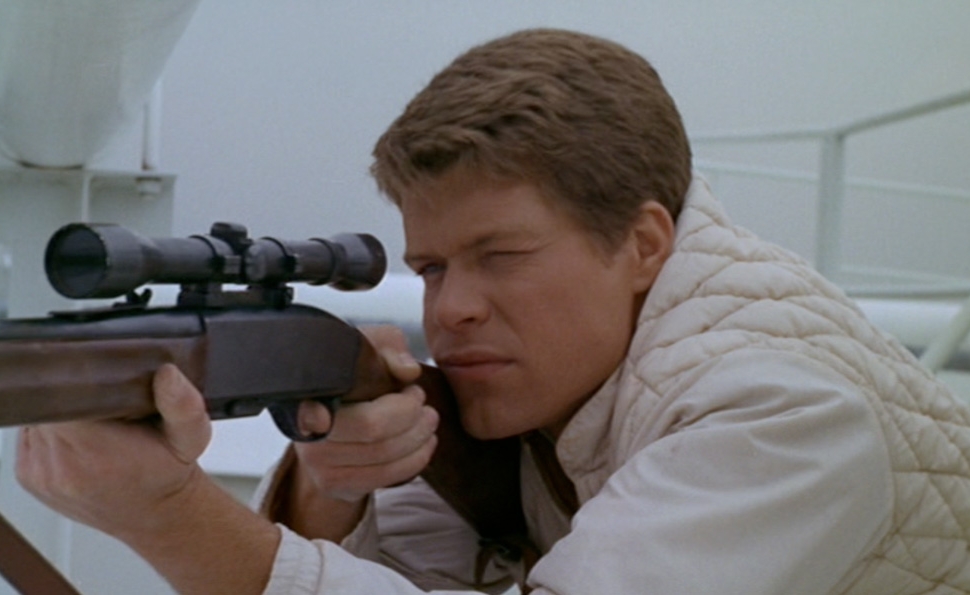 Boris Karloff became a star playing Frankenstein’s Monster. Thirty-seven years later, he ended his career in a movie that was assembled like one. The film was originally conceived under the ominous title Before I Die, and later released as Targets. It was Karloff’s last American film; it was the director, Peter Bogdanovich’s, first.

Targets’ origins were an unusual arrangement between Bogdanovich and producer Roger Corman. Karloff owed Corman two days of work, and the notoriously frugal Corman was not about to let those two days go to waste. At the time, Bogdanovich, a respected film critic, historian, and programmer, was just getting into the movie business as Corman’s assistant. His work on the biker movie The Wild Angels impressed his boss enough for Corman to offer Bogdanovich the chance to make his own movie—with some important conditions:

Condition #1: He had to use Karloff for those two owed days.

Condition #2: He also had to incorporate 20 minutes of footage from another Corman-Karloff picture, 1963’s The Terror.

Condition #3: He also had to shoot another 40 minutes of movie without Karloff.

If Bogdanovich consented to the conditions, he could make whatever movie he wanted. Within some extremely strict guidelines, the director had absolute creative freedom.

By necessity, Targets tells two parallel stories that each comprise about half of the film’s runtime. In his portion, Karloff plays Byron Orlok, an aging horror-movie icon (his name is an homage to the vampire in Murnau’s Nosferatu) who decides to retire. After a screening of his latest picture (called, you guessed it, The Terror), he announces his plans to the picture’s crestfallen producers and director, Sammy Michaels (Bogdanovich).

“The Terror’s atmosphere is spooky but wholly artificial... In contrast, the horror in Targets is entirely naturalistic.”

While Orlok’s handlers beg him to reconsider, an exceedingly ordinary-looking young man named Bobby Thompson (Tim O’Kelly) goes about his exceedingly ordinary life: dinner with his wife and parents, trips to the gun range with his dad. But when no one’s looking, Bobby starts stockpiling guns and ammunition. He stays up all night, smoking cigarettes and glancing over at a pistol on his bedside table. And then one morning when his wife comes in to kiss him, he shoots her in the stomach then kills his mother and a delivery boy. Bobby calmly cleans up his bloody mess, tucks the corpses into bed, packs up his arsenal, and ventures out on a killing spree that ends at the very drive-in movie theater where Orlok is giving his farewell public appearance after yet another screening of The Terror.

Despite its disjointed origins, Targets is an impressively coherent movie about the end of an era: the fade to black for old-fashioned monster movies and the coming of a new and truly terrifying kind of monster, one that isn’t easily recognized by its gruesome visage or simplistic motivations. While most of his peers were making movies that reveled in youth culture and sensationalized violence, Bogdanovich created a cinematic elegy for Hollywood’s golden age. Largely overlooked in its day and mostly forgotten now, it remains one of the unsung masterpieces of the New Hollywood period: a brilliant meditation on the evolution of onscreen horror and one of the most terrifying depictions of gun violence in movie history. In the end, the conditions proved crucial to the film’s success; Targets wouldn’t be half as effective without Karloff and The Terror playing themselves.

Bogdanovich ended up using less than the Corman-mandated 20 minutes of The Terror, and most of what he did include wound up in the background of the climactic confrontation at the Reseda Drive-In. He used so little, in fact, that there isn’t enough of The Terror in Targets to make sense of the original film’s plot. But a screening of The Terror (which is available to stream on Amazon Prime and Hulu Plus) reveals the extent to which Bogdanovich embedded Corman’s themes in his own movie.

The Terror follows a wandering French soldier named Andre Duvalier (Jack Nicholson), who inadvertently stumbles onto a mystery involving a young woman (Sandra Knight) who appears to be the ghost of the dead wife of Baron Von Leppe (Karloff), the aging, hermetic lord of a local castle. Like Targets’ Bobby Thompson, Von Leppe murdered his own wife; in his case, because he found her sleeping with another man. The young woman, Helene, repeatedly comes to Von Leppe encouraging him to kill himself and join her in the afterlife.

When Duvalier arrives at Von Leppe’s house, the Baron gives him a tour of the castle. “What you see, Lieutenant,” Von Leppe tells Duvalier, “are the remains of a noble house. Relics. Ghosts of past glories.” To which Nicholson replies, “A noble heritage is something to be proud of, Baron.” That sentiment is echoed in Targets’ relationship between Orlok and Sammy Michaels (named, in another homage to old movies, after Bogdanovich’s mentor and uncredited Targets script doctor, Sam Fuller). Orlok wants to retire; Sammy wants him to make his next movie. “Anybody can walk through the special effects for you,” Orlok says. “It’s not that kind of picture, and there’s nobody else for it,” Sammy replies. “The part is you.” (It sounds like Sammy is trying to convince Orlok to appear in Targets.) Orlok won’t budge. “I’m an antique. Out of date,” he insists. He doesn’t call himself a relic, but he comes pretty close. 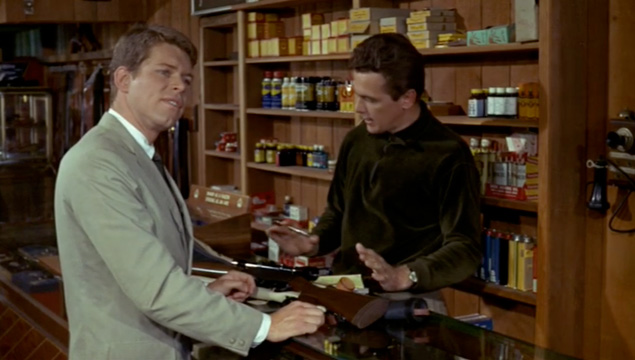 Later, Sammy visits Orlok at the Beverly Hills Hotel and tries to convince him to rethink his retirement. As they drink and talk, they find an old Orlok film on television (actually Howard Hawks’ The Criminal Code, which features one of Karloff’s first screen performances). “All the good movies have been made,” Sammy grumbles as they watch it together. In The Terror, it’s Karloff’s character who is love with a ghost, that of his dead wife. In Targets, the film itself is in love with ghosts—of old movies. (On his DVD commentary for Targets, Bogdanovich concedes that Sammy’s opinion about the state of 1960s cinema was his own at the time.)

The Terror’s atmosphere is spooky but wholly artificial: plywood castles, stock footage dark-and-stormy nights, absurdly dramatic gothic music. In contrast, the horror in Targets is entirely naturalistic. Bobby’s murders take place in real locations (an oil refinery next to a freeway; the actual Reseda Drive-In), most in broad daylight, with no non-diegetic music. The Terror and the generation of movies it represents are spooky, but also comparatively cathartic; set in France a hundred years ago, populated with ghosts and witches, they offer a sort of scariness that’s safely removed from our own lives. Bobby’s horror is genuinely unnerving because it’s rooted in reality; Bogdanovich based the character on Charles Whitman, who murdered his wife and mother, and then killed more than a dozen other people on August 1, 1966, from atop a clock tower on the campus of the University Of Texas. Sadly, almost 50 years later, these sorts of events are still all too familiar. Today, it’s impossible to watch the climactic slaughter at the Reseda Drive-In and not think of the shooting at a movie theater in Aurora, Colorado last summer that left 12 people dead and 70 others injured. The old monsters have left us, but the new ones are still around.

The drive-in sequence includes one of Bogdanovich’s greatest and most disturbing touches. Pursued by police, Bobby hides out at the drive-in. While children play on a nearby playground, Bobby slips behind the enormous screen, climbs to the top, and takes aim at the customers. Bogdanovich’s camera (manned by director of photography Laszlo Kovacs) doesn’t simply mimic the perspective of the sniper; it mimics the perspective of his bullets as well. As Bobby fires, the lens zooms toward Bobby’s victims at high speed, following the path of the ammunition as it makes its way to its targets. Many films have used point-of-view editing to make the audience feel like accomplices in a crime, and to call into question the audience’s own motives for wanting to watch grisly violence. Few have used point-of-view editing to make the audience feel like the actual murder weapon, or to implicate the viewer so directly in brutality they’ve willingly chosen to witness. 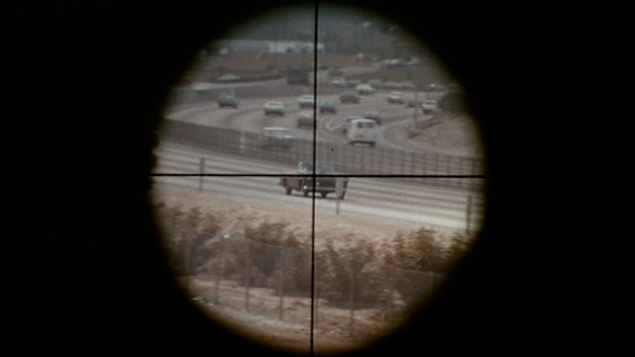 As Bobby fires on the oblivious victims at the drive-in (the portable speakers in each car drown out the gunfire), Orlok realizes what’s happening and heads toward the screen. Confused by the sight of the actor approaching while his projected image looms overhead, Bobby freezes, giving Orlok just enough time to disarm him. New Hollywood might be more frightening, but at least on this day, Old Hollywood still reigns supreme.

Shortly after Corman sold Targets to Paramount (for $150,000, netting himself a cool $25,000 profit), both Martin Luther King and Robert F. Kennedy were killed by armed assassins, all but dooming the film to obscurity for the sin of excessive cultural relevance. Fortunately for Bogdanovich, the film eventually found its way to the executives at BBS Productions, the hip boutique studio behind Easy Rider and Five Easy Pieces, and they liked what they saw. That paved the way for the director’s next film, The Last Picture Show, which became his breakthrough. It was also another story about the end of one era in cinema, and the beginning of another.

Come back tomorrow for our Movie Of The Week Forum discussion on Targets' unusual structure, vision of the All-American Killer, and more.