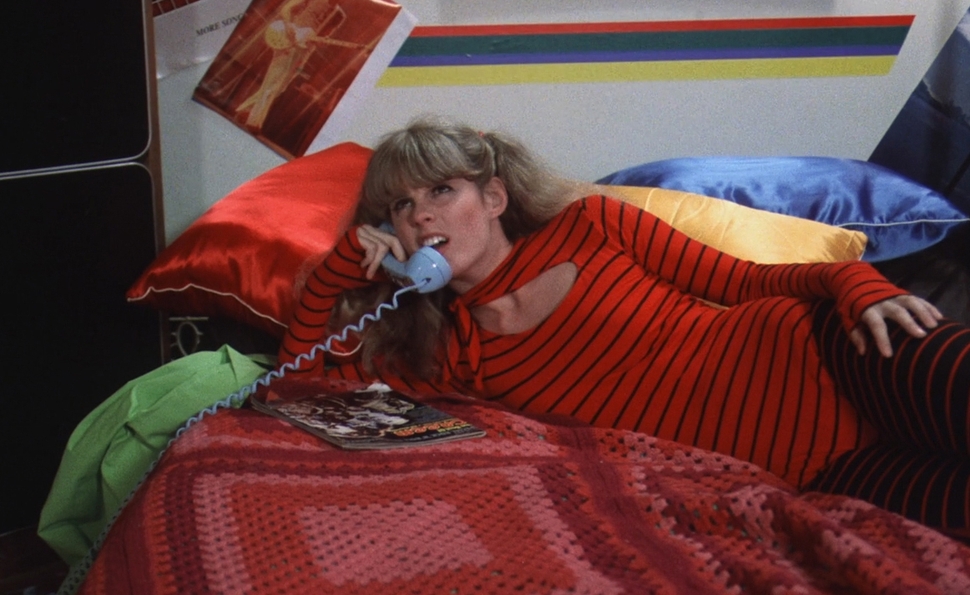 Scott: I hadn’t seen Rock ’N’ Roll High School for probably 20 years, and it’s even better than I remember—so much so that you’ll have to forgive my reaching for superlatives. My first thought is this: The film is as good and proper a vehicle for the Ramones as A Hard Day’s Night was for The Beatles, even though the Ramones aren’t the lead characters, so much as the unlikely objects of worship. (The great Dick Miller, who appears at the very end, improvised the immortal line “They’re ugly. Ugly, ugly people.”) You can’t beat The Beatles’ entrance in A Hard Day’s Night, which is arguably the high point of that film. Rock ’N’ Roll High School doesn’t have the same cinematic dynamism, but having Joey and the gang arriving in a top-down convertible (with a “Gabba Gabba Hey” license plate), playing “I Just Wanna Have Something To Do,” is close enough. What’s more, the spirit of the film—showcasing punk’s irreverence and fun, despite the destruction in the final sequence—is entirely suited to the music. If the film was intended as a platform for (and beneficiary of) the Ramones’ specific appeals, I don’t see how it could be any better.

There’s so much to get into here—the New World touch, the goings-on among students and staff at Vince Lombardi High School, the majesty of P.J. Soles—but let me yield the floor to you, Keith. Plenty of cheap New World productions came out during this period. Plenty of high-school comedies and rock movies, too. What sets this one apart for you?

Keith: I think it’s a case of everything converging in the right place at the right time. With New World, producer Roger Corman had adapted to the B-movies of the 1970s, and he wasn’t afraid to exploit a trend. Famously, this was originally supposed to be Disco High, until director Allan Arkush convinced Corman that rock ’n’ roll would be better. And at one point, it would have been a vehicle for Cheap Trick. I love that band, and would love to peer into an alternate universe where that version of Rock ’N’ Roll High School got made. But I wouldn’t change a thing about this one.

Arkush and his collaborators—including Joe Dante, who developed the story with Arkush, and directed a few scenes—have just the right spirit for a late-1970s high-school comedy, one in which the kids are more bored than angry. (In some ways, it’s the comedic flipside to the bored-kids-gone-mad drama Over The Edge, released the same year.) The Ramones’ take on punk—cartoonish, yet also seriously great—fits right into it. Remove the band, and you still have a very funny movie. I love all the comedic concepts, especially Clint Howard as what Nathan’s Keynote describes as a “black-market guidance counselor,” and the always-welcome presences of Paul Bartel and Mary Woronov. But the Ramones complete the picture. It’s ridiculous that a cute, upbeat kid like P.J. Soles’ Riff Randell would crush out on a band as greasy and deliberately unattractive as the Ramones. Yet how could you not crush out on them? They’re amazing. They’re rock ’n’ roll! 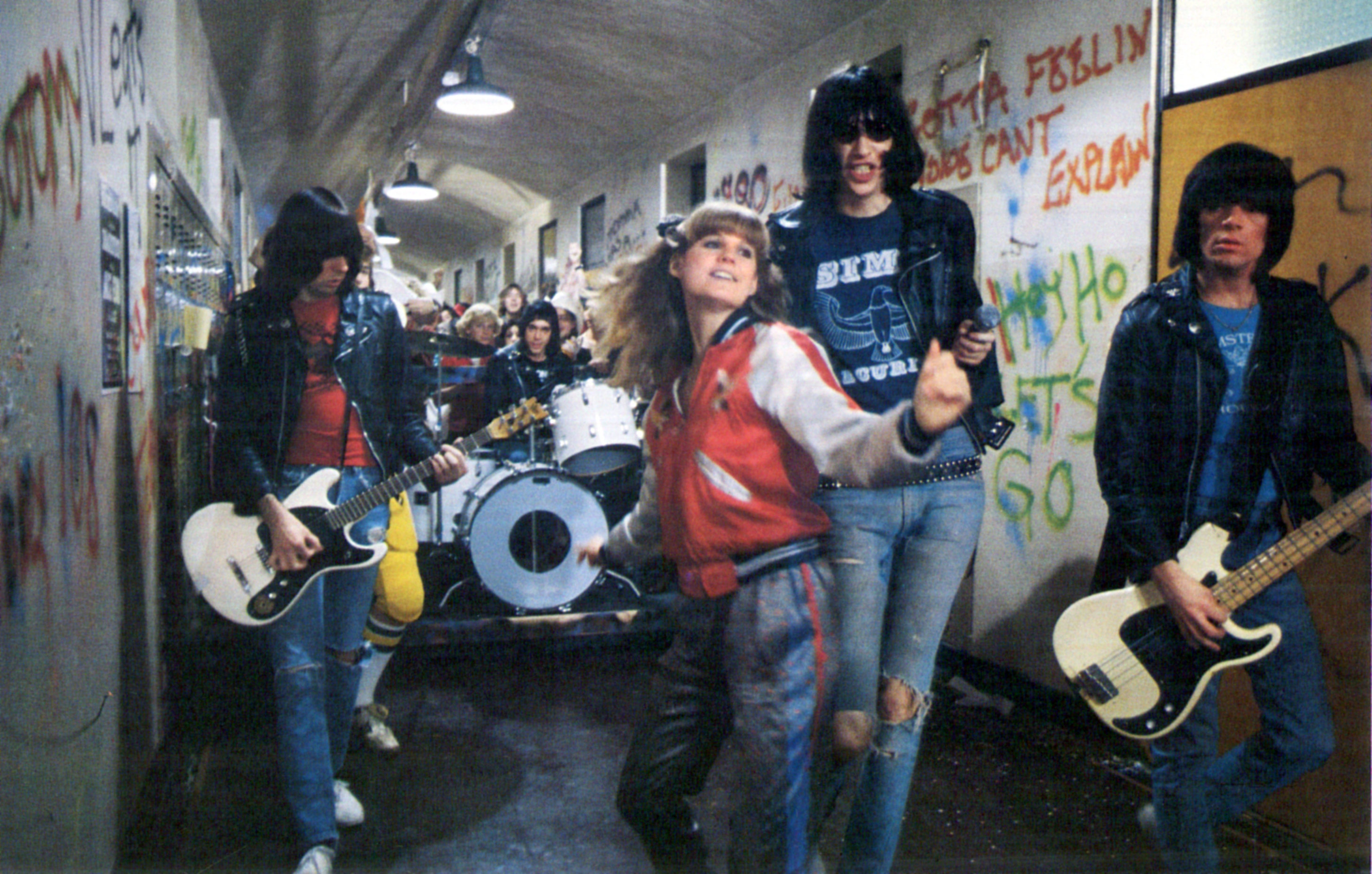 We mentioned this being a product of 1979, and it’s a strikingly different, pretty strange take on high-school life, compared to some of the teen movies that followed it, including Foxes in 1980, and Fast Times At Ridgemont High in 1982. Was this the last movie for a while that made being a teenager look fun? Even the John Hughes movies are defined as much by angst and anxiety as laughs.

Scott: You make an excellent point. The only truly miserable kid in the entire film is the poor freshman who wears a beanie and gets stuffed in a locker and a trophy case—and even that reads more like a parody of movie nerd-dom than the real McCoy. What’s cheering about Vince Lombardi High School is how egalitarian it is: Riff Randell and Kate Rambeau (Dey Young) aren’t natural co-conspirators, either in high-school comedies or just plain ol’ high school. Riff is the rebel who lives in detention; Kate is the science nerd who’s never been in detention. But we’re barely into the first act when the two become inseparable partners in hailing the Ramones and riling up the new principal, Miss Togar. (One of my favorite gags in the film has Kate giving Miss Togar increasingly ridiculous notes to excuse Riff’s absence while she’s camped out for tickets. Each one claims a member of Riff’s family has died. On the third day, it’s Riff’s goldfish, which leads to another favorite gag: When Miss Togar’s hall monitors prove Riff was lying by revealing the goldfish is still alive!)

Rock ’N’ Roll High School also reverses expectations by making Tom (Vince Van Patten), the handsome star quarterback and honor student, utterly incapable of talking to the opposite sex about anything but the weather in Idaho. Throughout the next decade in teen sex comedies, Tom’s character traits would turn up exclusively in dorks with pocket protectors, so it’s refreshing to see a film defying a trend that had yet to come to pass. Better still is Bartel as a music teacher who seems like he’s going to be a stick in the mud, boring students with lectures on Beethoven. (Though the kids should have laughed more at his joke about how Beethoven writing a symphony while deaf was “unheard of.”) He winds up embracing the Ramones and their message of nonconformity just as fervently as Riff does—which, again, is unexpected for a person of his authority.

All of which leads me to this point: Vince Lombardi High School was already Rock ’N’ Roll High School before the Ramones came blowing into town. Not only do the students resist conformity en masse—and seem to suffer from little of the social stratification we expect from movie high schools—but the faculty is right there with them. What Miss Togar and her minions are attempting goes against the spirit of the place, which embraces individualism, rebellion, and fun. There’s a Roger Corman/New World metaphor in there someplace, Keith. I’ll leave it to you to draw it out.

Keith: I wouldn’t have noticed it if you hadn’t pointed it out, but now that you have, it’s pretty clear: Corman enjoyed considerable success over the years as a director and producer of B-movies, and he’s seemed to content to stay just that, even today. His movies haven’t attracted nearly as much attention in the post-grindhouse/post-drive-in era, and they haven’t doubled as training grounds for the great filmmakers of tomorrow in just as long, but he’s still out there at age 88, plugging away as executive producer on projects like Sharktopus Vs. Pteracuda. In his heyday, he seemed happy to be the biggest little movie mogul, and the films he put out in the world have been misfit underdogs (and often about misfits and underdogs), whether it’s the doomed heroes of his Edgar Allan Poe movies or the Rock ’N’ Roll High School kids.

This film comes at an interesting point in Corman’s career, too: A year later, he released Battle Beyond The Stars, a Star Wars-inspired riff on The Seven Samurai that was the closest he’s come to making a big-budget movie. (Which is to say: Not that close, but he clearly spent some money on it.) It takes itself a little more seriously than Rock ’N’ Roll High School, but not that much more seriously. B-movies took a nastier turn in the 1980s though, as evidenced by Corman-produced films like Humanoids From The Deep, with its sea-creature-on-bathing-beauty rape scene, and the semi-infamous Galaxy Of Terror, whose poster art tells the tale. There’s kind of a last-hurrah quality to Rock ’N’ Roll High School, particularly when it comes to its female characters, who get an even footing with the male characters, and a reason to exist other than to be chased by the boys. The film has a goofy irreverence that soon faded away, supplanted by leering teen comedies on one end and hard-edged genre films on the other. 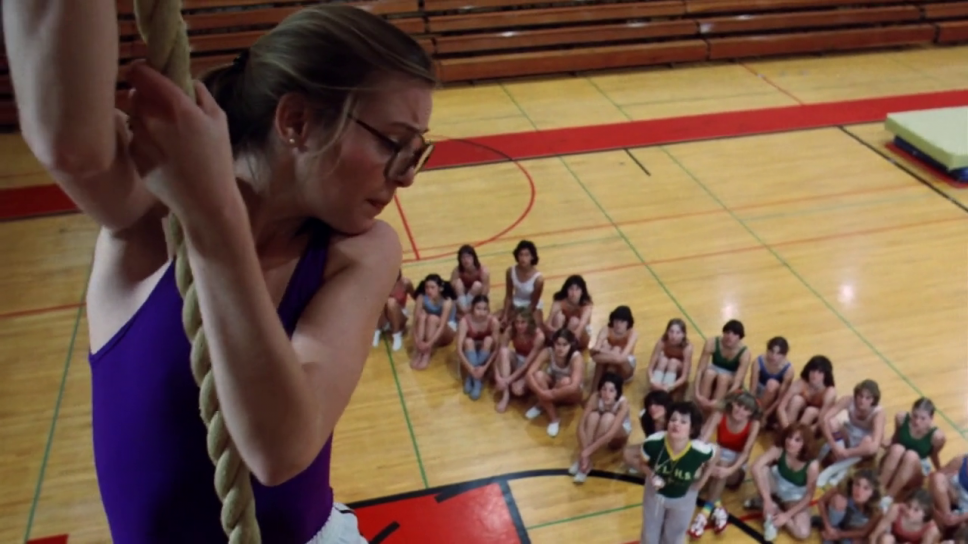 But we might be getting too far afield of the film at hand: It’s raucous, joyous, and filled with moments like the Ramones performing “Do You Wanna Dance?” as the entire student body launches into an impromptu production number while they fill the halls of the rechristened Rock ’N’ Roll High School. This movie: Do they get much better?

Scott: No, they do not. That cast alone: Woronov, shot to look even taller than her 6-foot frame, has the wonderfully imperious quality of a Corman women-in-prison warden; Clint Howard anticipates the oozy charisma of 1980s comic sleazeball Curtis Armstrong as the black-market supplier of dates and paraphernalia; and there’s Bartel, who I’ve already singled out as the stiff teacher turned Ramones convert. But the movie belongs to P.J. Soles, whose run in the late 1970s (this, Carrie, Halloween, and Breaking Away) gives her a special place in the pantheon of cult movie stars. She’s the sparkplug in every movie she’s in—confident, enthusiastic, an endless source of energy. She makes the scene where Riff Randell is declared an honorary member of the Ramones seem like the happiest moment in human history.

The comic tone of the film—goofy, digressive, referential, occasionally absurdist—also struck me as a more refined version of Arkush and Dante’s Hollywood Boulevard from a few years before. At $60,000, Hollywood Boulevard was the cheapest film Corman ever produced, so Arkush and Dante just stuffed it with jokes and nods to the drive-in-movie fans it was courting. Rock ’N’ Roll High School is a much better piece of craftsmanship all around, but it echoes with the same comic voice. Naming the hall monitors Hansel and Gretel (first name Fritz in both cases) is a typically inspired touch, and then you get offbeat lines of dialogue like, “Tom Roberts is so boring, his brother is an only child,” or “I’m first in line, and if you don’t like it, you can put it where the monkey puts the nuts!” For a silly, cheapo comedy built around the Ramones, Rock ’N’ Roll High School is about a thousand percent more sophisticated than it had any right to be.

Keith: That’s kind of how I feel about this movie, too: If you don’t like it, you can put it where the monkey put the nuts. There are better movies than Rock ’N’ Roll High School, but few as close to my heart.

Nathan's Keynote on Rock ’N’ Roll High School said “Hey ho, let’s go” on this discussion, with a look at the film’s version of punk as friendly, communal, and universal. And on Thursday, Noel Murray chimes in with an answer from across the pond: Sex Pistols 1980 film The Great Rock ’N’ Roll Swindle.