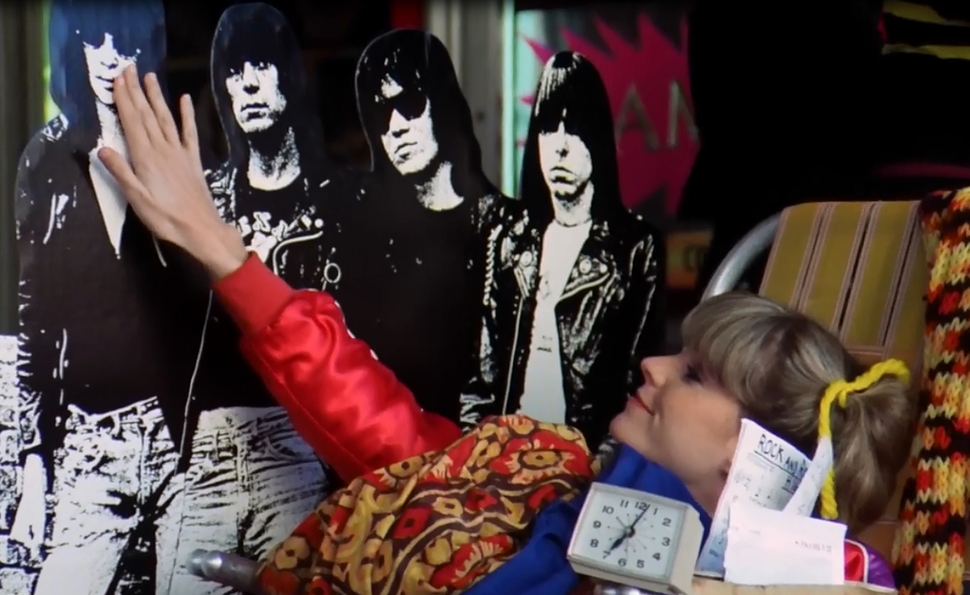 In Rock ’N’ Roll High School, rebellion and the Ramones are for everyone

Punk rock in its first form was obsessed with alienation and provocation, with separating true believers outfitted in the official punk uniform of safety pins, hair dye, jeans, and leather jackets from a world of buttoned-up squares who simply did not, and would never, understand what this thrilling new noise was all about. (Or that it was really about anything at all.) One of the pleasures and surprises of Allan Arkush’s joyous 1979 musical comedy Rock ’N’ Roll High School is how wonderfully inclusive it is. It does have its villains, authority figures who simply didn’t understand, most notably in the form of Principal Togar (Warhol scenester turned ubiquitous character actor Mary Woronov) and her sniveling, body-search-loving hall-monitor henchmen. But they are far outnumbered by kids, mice, and even adults who set aside their differences to celebrate the music of the Ramones, and with it, the timeless power of rock ’n’ roll at its rawest, sweetest, and purest.

Rock ’N’ Roll High School occupies a universe where strapping football hero Tom Roberts (Vincent Van Patten) is a virginal dork who talks in Mad magazine thought bubbles as he wanders down the hallway, wondering why he can’t get laid. To that end, he needs the assistance of Eaglebauer (Clint Howard), a sketchy dude who operates within the school as a strange combination of love guru, con artist, and black-market guidance counselor. The object of Tom’s affection is Kate Rambeau (Dey Young), a brainy science geek, complete with telltale oversized glasses. But that doesn’t mean she can’t be best friends with Riff Randell (P.J. Soles), the world’s No. 1 Ramones fan, and the school’s chief “rock ’n’ roller.”

Like punk, high-school movies are all about cliques. The scene where the new kid is introduced to the habits and customs of the school’s various subcultures, best employed in Clueless, is one of the biggest clichés in movies about teenagers. Yet Rock ’N’ Roll High School is gloriously indifferent to cliques. It realizes that—nerd, jock, brain, or weird middle-aged dude stuck in a state of perpetual adolescence—everyone essentially wants the same thing: to rock out, get laid, dance, and stick it to The Man.

In reality, Ramones fandom was a small, specific, eccentric niche. But in Rock ’N’ Roll High School, the Ramones are as big as The Beatles. The group’s popularity and appeal crosses all class, clique, and generational boundaries. Rock ’N’ Roll High School subscribes to the glorious notion that anyone and everyone would fall crazily in love with the Ramones, if exposed to their music. The theme is most perfectly embodied by a subplot where the school’s dorky music teacher, Mr. McGree (Paul Bartel, a wonderfully perverse writer-director with a punk-rock sensibility, the man behind such cult films as Eating Raoul), goes from being indifferent to the Ramones to becoming a Ramones super-fan. At the Ramones concert at the end of the film, he calls them contemporary Beethovens. He also smokes a peace pipe with a Native American (a scalper, in one of the film’s many visual puns, which run the gamut from inspired to groan-inducing) and a giant mouse designed and played by special-effects whiz Rob Bottin. (In the film’s wonderfully surreal world, the Ramones’ appeal even extends to other species.) Everyone is united in their love for the Ramones, a passion that has the power to move mountains and blow up schools. 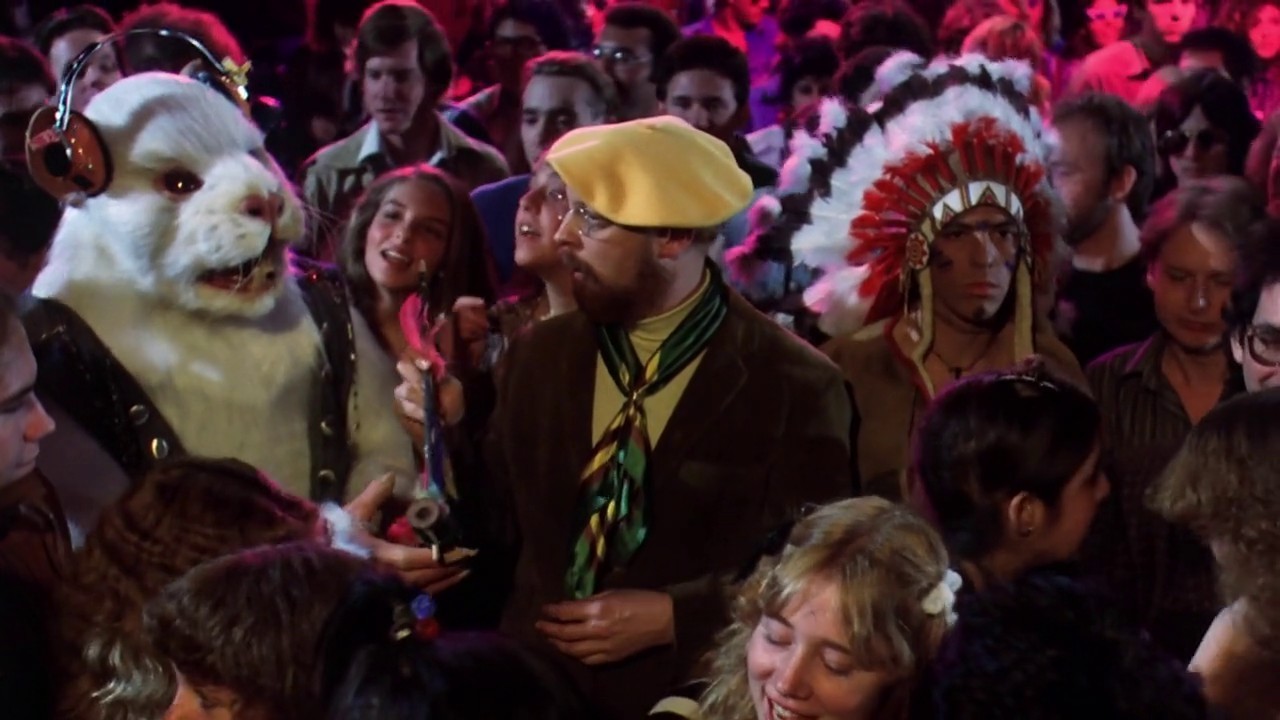 Director Allan Arkush channels Frank Tashlin and the smartass spirit of Mad throughout the film, transforming his love letter to rock ’n’ roll and the eternal allure of being a teenager at war with parents into a live-action cartoon filled with giddily surreal touches. These include having the Ramones play not just in a conventional concert that rivals The Beatles’ ear-splitting finale in Hard Day’s Night for sheer awesomeness, but also in such wonderfully unexpected, impossible places as bedrooms, Riff Randell’s shower, a car, a backyard, and the halls of Vince Lombardi High, whose namesake’s images are abused in all manner of colorful ways during the film’s final act.

The Ramones are at the center of Rock ’N’ Roll High School, but it would be a mistake to call them the lead actors, or actors at all. They all deliver their lines as if through mouthfuls of cigarettes and crunchy peanut butter. Watching them slaughter the English language in what sounds like an endless series of caveman grunts, the question becomes less whether they memorized their few lines (many of which revolve around pizza), and more whether they’re familiar with the English language at all. But while their banter borders on subverbal, the sing-along lyrics that accompany their performance of “Teenage Lobotomy” highlight how deceptively clever these ostensible cretins’ wordplay really was. Rock ’N’ Roll High School captures the Ramones’ demented wit and spirit. It does them and their music justice, which is the ultimate compliment for a punk-rock film. But while no one would confuse Dee Dee or Joey for professional thespians, least of all the filmmakers, they have remarkable presence. And the film exploits that brilliantly, whether Joey is cooing to Riff in a stoned fantasy sequence, or the film is holding on a tight close-up on Joey during the big concert sequence, making him look like a cross between a space alien and a praying mantis that has adopted semi-human form.

The Ramones dominate the soundtrack, obviously, but the other songs featured in the film provide a sense of the primordial stew out of which their Neanderthal punk rock emerged, from the primal guitar-rock of Chuck Berry (“School Day”) to the bratty theatrics of Alice Cooper (whose “School’s Out” plays exactly where audiences expect it), the sneering bar rock of Brownsville Station (“Smokin’ In The Boy’s Room”), and the proto-punk rebellion of Velvet Underground’s “Rock & Roll” (whose lyric “her life was saved by rock and roll” could apply to Riff).

Beyond spelling out the Ramones’ influences, the soundtrack connects the group’s turbocharged three-chord anarchy to the generations of rock that came before it. The Ramones were true originals, but they built upon decades of rockers who are referenced repeatedly in the film, like The Rolling Stones, The Who, and Bob Dylan. The surprisingly eclectic yet cohesive selection of songs that fill this 84-minute movie represent another form of inclusion: all these acts and groups sound great alongside the Ramones because they share a spirit, if not a sound.

The film’s joyous inclusiveness extends to its final sequence, where DJ Screamin’ Steve (Don Steele) addresses the audience directly, telling them that if they’re being oppressed by a fascist principal, and they want an impromptu Ramones concert/explosion of a public building to happen in their high school, all they have to do is give him a call. The film ends with the fantasy that the miracle of Rock ’N’ Roll High School—not just the ridiculously overachieving and timeless movie itself, but the destruction of corrupt authority in the name of liberating rock—is endlessly repeatable, and will always happen, if only someone wishes for it. 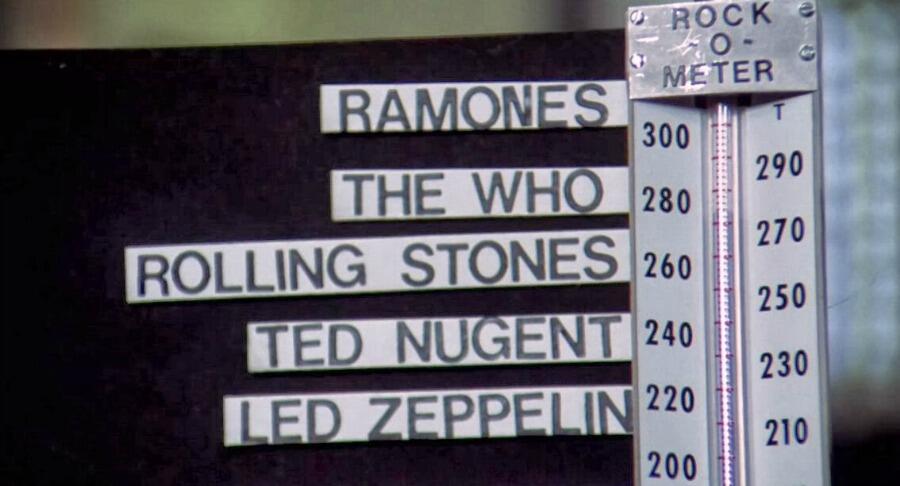 It’s a call for revolution not by scowling militants in uniforms, but by a goofy DJ convinced of the liberating, life-affirming powers of rock in its purest form. The movie’s famous Mad-style poster made this promise explicit with the tagline, “Will your school be next?” Though the film flopped at the time of its release, it was a big enough cult hit to spawn a little-loved sequel, 1991’s Rock ’N’ Roll High School Forever, which replaced the Ramones with Corey Feldman, then and sunk without a trace. It turns out that despite Screamin’ Steve’s words (and if you can’t trust a DJ named Screamin’ Steve, who can you trust?) the miracle of Rock ’N’ Roll High School wasn’t repeatable. That’s part of its magic. Like the Ramones, it was one of a kind, and retains its joyful power years later as a call to rebellion and rocking that includes just about everyone in its embrace.

Over in the Forum, Keith and Scott continue the discussion with a deeper look at Rock ’N’ Roll High School’s place in Roger Corman’s world and in trashy, culty B-films in general. And on Thursday, Noel Murray looks into a contemporaneous look at the punk scene on a different continent: Sex Pistols’ 1980s mockumentary The Great Rock ’N’ Roll Swindle.