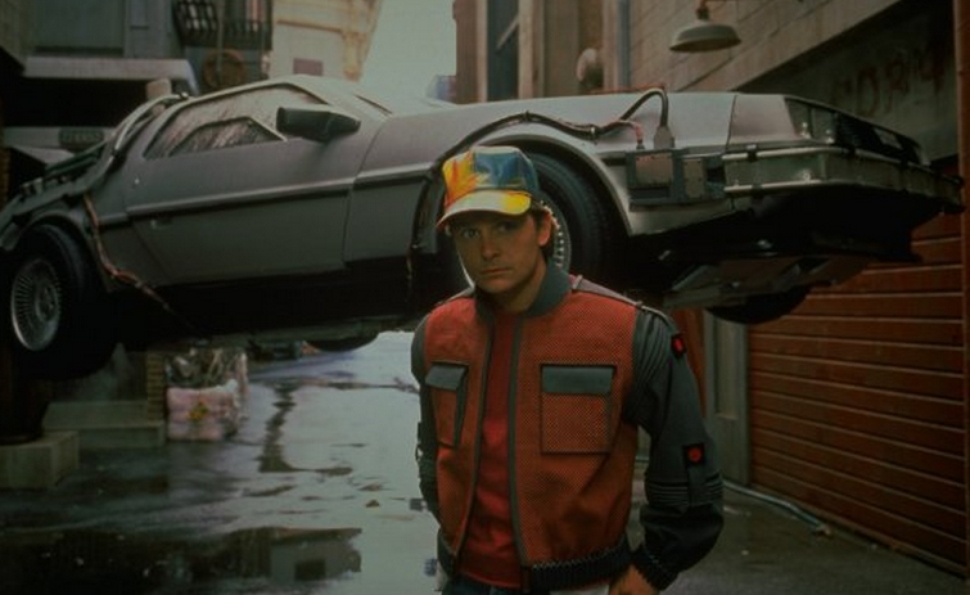 All movies become period pieces eventually, no matter what their makers intend. Boyhood’s 12-year shoot let Richard Linklater make a movie about life in the early 21st century without adopting any particular reflective attitude, and yet audiences still chuckle at the iMacs, the Harry Potter parties, and the Britney Spears songs. It’s a natural impulse to spot something dated and laugh—not derisively, but with a pleasant jolt of recognition.

That’s why, with each passing year, the comedy in the Back To The Future series becomes more complex. Over the course of three films, director Robert Zemeckis and his writing-producing partner Bob Gale sent Marty McFly (Michael J. Fox) and mad scientist Doc Brown (Christopher Lloyd) on a winding mission that dropped them into 1955, 2015, 1885, and 1985. But for the last three decades, our real world has changed, and so has the way audiences process the Back To The Future movies’ versions of each era. Ultimately, the entire franchise has become a comment on the 1980s.

Much of what the first Back To The Future reveals about 1985 is inadvertent. The advertising logos (Pepsi Free, Kal Kan, the Denver Broncos, etc.), the day-glo aerobics gear, the Walkman with foam headphones, even the use of “Libyans” as villains are all frozen in time, in a way Zemeckis and Gale couldn’t have recognized when they were making the film. Even some of the jokes are so 1980s-specific that they’ve lost their original meaning, or have seen that meaning undercut. When Marty auditions for the high-school talent show and gets told his band is “too darn loud,” the line is supposed to be ironic, because it’s spoken by rock star Huey Lewis. Today, Lewis is less instantly recognizable than he would’ve been in 1985, and even those who know him are more likely to remember him as a standard-bearer for middle-of-the-road mainstream pop than as some rowdy, noisy rebel.

Later in the film, after Marty travels to the 1950s, Zemeckis and Gale comment on the 1980s more directly, by having the people in the past react to things Marty doesn’t realize are odd, like him living in an era where families own more than one television set. Some of Back To The Future’s fish-out-of-water humor plays differently today, though. When Marty first arrives in 1955, the residents of Hill Valley assume his puffy orange vest is a life preserver, and that he must be a sailor. Zemeckis and Gale are pointing out how fashion trends look bizarre when seen from the perspective of another era—which is an observation the movie no longer needs to make. Just about anyone watching Back To The Future in 2015 would immediately find Marty’s clothes strange. Even the movie’s “present” is now foreign.

From the moment Marty arrives in 1955, Zemeckis and Gale start winking. Everything Marty sees in downtown Hill Valley is meant to be funny: the swarming pump-jockeys at the Texaco station, the Ronald Reagan movie playing at the local cinema, and the low, low prices. The audience is supposed to notice how different everything used to be—cleaner, cheaper, friendlier. But now that we have the same 30-year gap between us and Marty that Marty had with 1955, there’s a double layer of “boy, those were the days” in play. Back To The Future isn’t just a look back at the 1950s any more. It’s a reminder of what people in the 1980s found curious about their recent past. 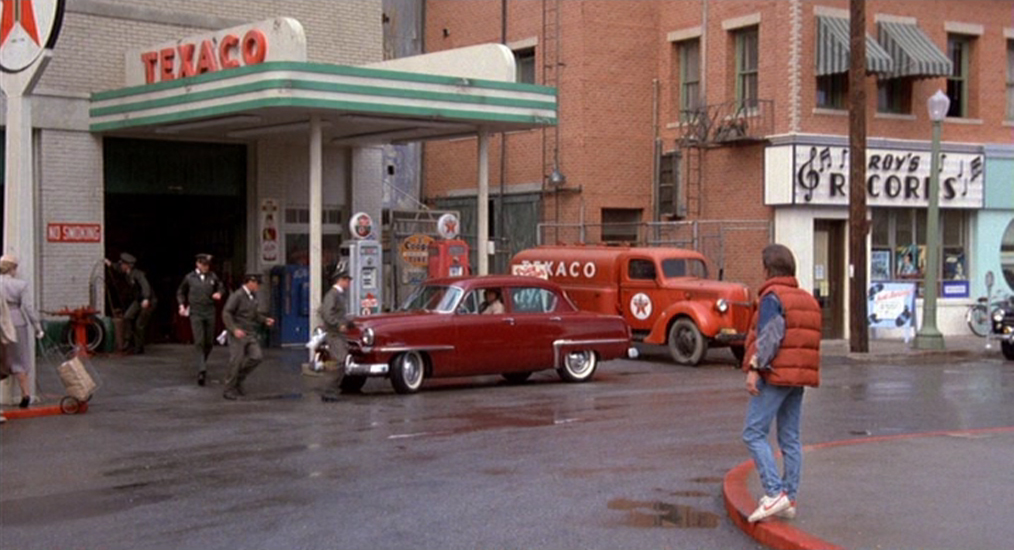 Back To The Future gets a lot of comic mileage out of the 1950s’ tame music and non-twist-off bottle-caps. But the film’s reliance on the Universal Studios backlot—particularly “Courthouse Square” as downtown Hill Valley—creates a deeper dissonance. This is “the 1950s” from the perspective of the 1980s: a Hollywood façade, familiar to fans of syndicated Leave It To Beaver reruns. In the 1985 scenes, Zemeckis and Gale try to make Hill Valley seedy by covering it with graffiti and trash, and replacing the old movie palaces and soda shops with adult bookstores and bars. But the muss-up is unconvincing. Hill Valley never looks like anything other than a set—which means that on some level, Back To The Future is pining for a past that never existed outside of a movie or TV screen.

To be fair, Zemeckis and Gale do try to undercut the sanitized version of the 1950s, by showing Marty’s prim mother Lorraine as a loose teen who likes to drink and park with boys. (The whole idea of a disapproving parent with a wild past was one of the film’s original inspirations.) Yet even in Lorraine’s scenes, there’s a 1980s sensibility at work. When cartoonish bad guy Biff Tannen tries to rape Lorraine, the assault is played a lot lighter than it would be today—assuming that such a moment would even make it into a PG-rated blockbuster in 2015.

Because it actually is 2015, there’s been a lot of interest lately in Back To The Future Part II’s predictions of what life would be like today. Flying cars? Hoverboards? Self-adjusting clothing? Holographic movies? Government-controlled weather? It’s a “no” on all of those, at least as depicted in the film. And while the Cubs could well win the World Series this year, unless Major League Baseball rams through a major realignment over the next couple of months, the team isn’t going to beat Miami—although the very existence of a Miami baseball team was a savvy bit of guesswork by Zemeckis and Gale. 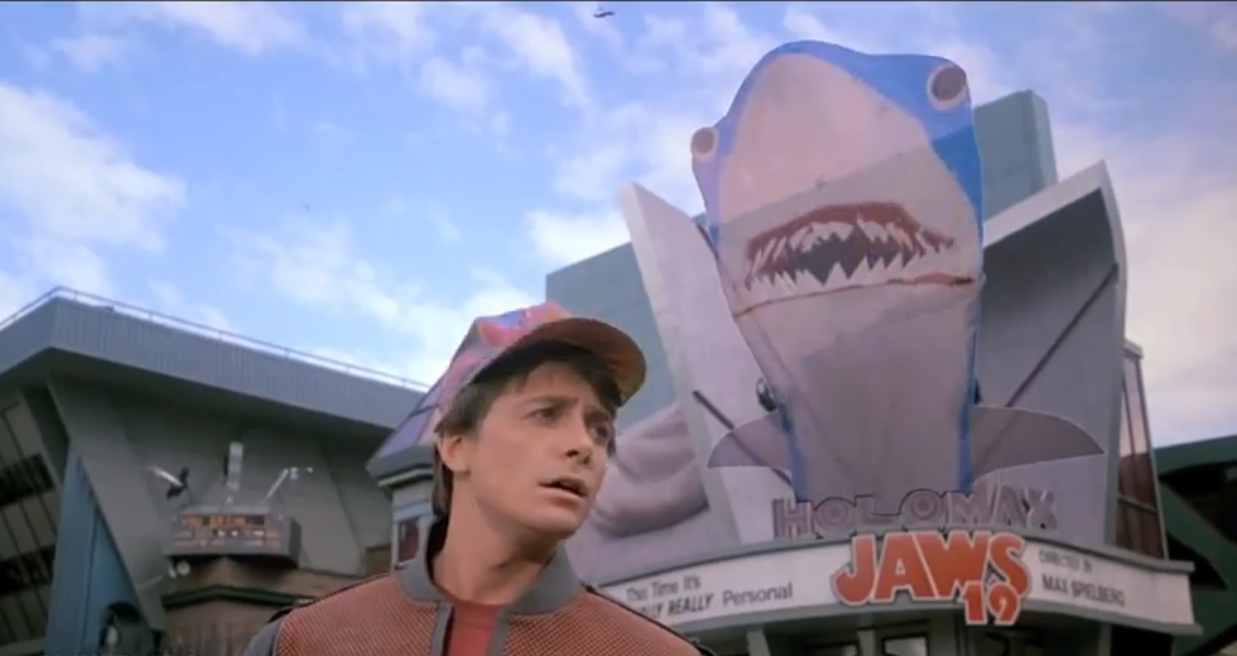 What’s most pertinent today about Back To The Future Part II, though, isn’t the jump to 2015, but the one into the heart of 1989, when the movie was made. In 1989, Zemeckis and Gale could imagine that in 2015, vehicles would run on biofuel, and that people would regularly make video-calls. But they also figured we’d still be communicating via faxes and pay-phones. And given Zemeckis’ embrace of digital technology and computer-generated images, it’s somewhat ironic that in his 2015, all the video signals look analog—and that one of the great advances is “dust-repellant paper,” as opposed to e-books. As is often the case with movies set in the future, it’s less telling what they overpromise than what they can’t see coming.

In writing and directing the 1955 scenes, Zemeckis and Gale were dealing with a decade much of their audience had experienced firsthand. But when Marty and Doc Brown are stuck in 1885 in Back To The Future Part III, the filmmakers preferred to honor the memory of old Westerns, not “the Old West” per se. They do work in a good joke about the differences between movies and reality, by having the 1950s version of Doc Brown dress Marty in a Howdy Doody-ready cowboy outfit that gets Marty laughed out of a saloon in the 1880s. But Back To The Future Part III’s take on the West isn’t really any more accurate than the Doc’s. The film has its own cartoonish deceptions of gunslingers and Native Americans. That was clearly a big reason for traveling to 1885 in the first place: To return to a kind of moviemaking Hollywood didn’t often do in the late 1980s. 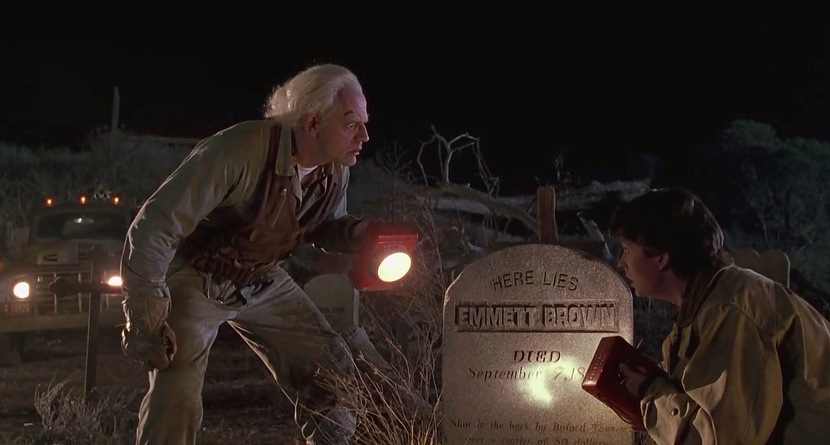 Back To The Future Part III is a genre homage, featuring cameo appearances by character actors like Pat Buttram, Dub Taylor, and Harry Carey, Jr. But it’s also a salute to Back To The Future itself. Both of the sequels treat the original film as a sacred text, calling back to key moments: Marty commandeering a skateboard, Biff landing in a pile of manure, Hill Valley trying to get its big clock running, Marty waking in a room with a woman who looks like his mother, a Tannen family member telling a McFly family member to stay out of some sort of eatery, and so on. By Back To The Future Part III, the repetition has become so encoded into the structure of the film that even though the bulk of the story is set in the 19th century, it’s easy to predict what’s going to happen. The journey to 1885 is really a trip to 1985, to revisit the first movie.

Because Back To The Future ends with Doc Brown dragging Marty into the future, the overarching story stays rooted in 1985, even though Part II and Part III were shot back-to-back in 1989. As a result, Part II in particular expresses a premature nostalgia for the 1980s, particularly in a scene where Marty visits the “Cafe 80s” and is surrounded by retro videogames, Michael Jackson songs, and a Max Headroom version of Ronald Reagan. (Although circa 1985, Marty likely wouldn’t have known anything about Max Headroom, which had yet to make it to America in a big way.) For at least two-thirds of the Back To The Future series, Marty fights to preserve and improve a time that had already passed for the movies’ fans. 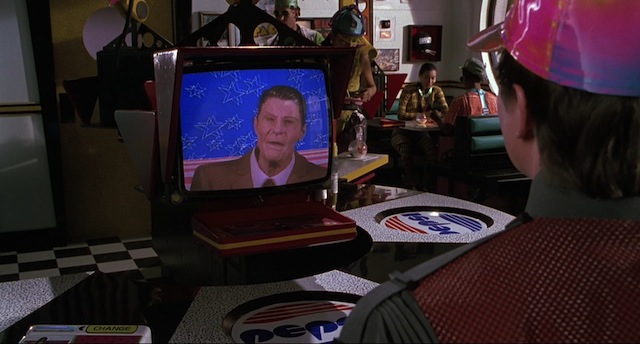 Actually, watching the Back To The Future films today often feels like an exercise in upholding something quaint. The series is forward-looking, but its most progressive elements are unrelated to the actual story of Marty McFly. The movies point the way toward the modern trend of making franchise pictures in tandem, and all three explore the myriad possibilities of integrated product-placement. (Every real beverage and foodstuff in a Back To The Future film is both a marker of the time period and an ad.) Otherwise, nearly everything about the form of the Back To The Futures screams 1980s, from the nerd stereotypes to the special effects to the fascination with wiggy hand-made technology.

But the biggest era signifier is the movies’ idea of a happy ending. The ideal Marty keeps chasing is some combination of the cheery sterility of 1955 Hill Valley and the shameless materialism of 1985. A decade earlier or a decade later, the depiction of the McFly family as fashionably dressed yuppies would’ve been the starting point for a film about how money can’t buy happiness. In 1985—and maybe even in 2015—conformity is the fantasy.

Keith kicked off our Movie Of The Week discussion on Tuesday with a Keynote looking at Back To The Future’s thoughts on the inevitable, yet resistable, march of time. And in the Forum, Jen and Genevieve dug into its big performances and little moments. This wraps up this week’s selected movie, but we’ll be back next Tuesday with the 1979 Ramones-assisted music-comedy Rock ’N’ Roll High School.