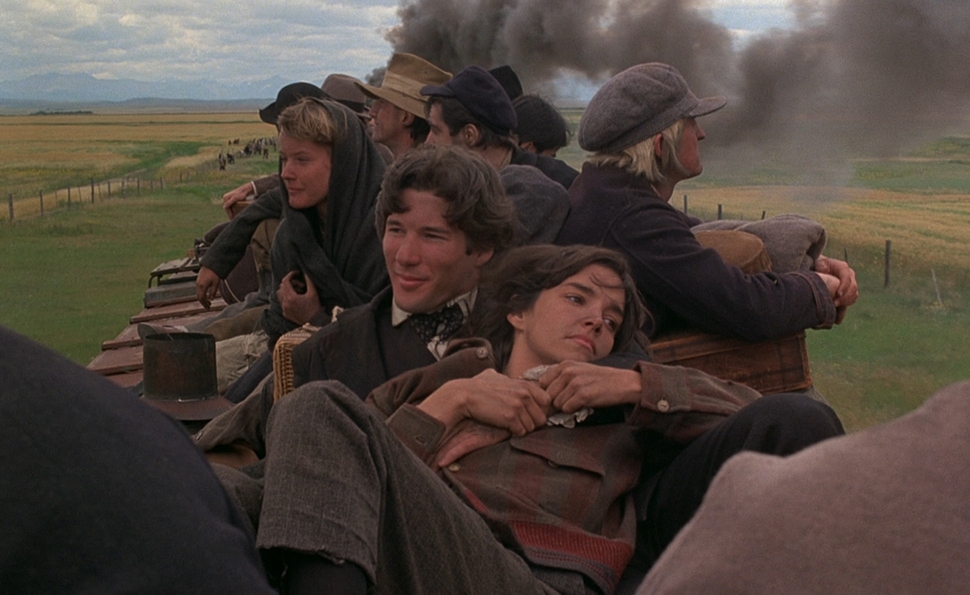 Director Terrence Malick has never shown much interest in talking about his films, but for the Criterion DVD and Blu-ray editions of Malick’s 1978 drama Days Of Heaven, several Malick associates speak up, via the commentary track. Editor Billy Weber, art director Jack Fisk, costume designer Patricia Norris, and casting director Dianne Crittenden are frank about what it’s like to work with the man they call “Terry,” and how on Days Of Heaven, Malick quietly, slowly, sometimes aggravatingly gathered the materials he needed to realize a vision that kept changing through every phase of the production. The commentary delves into the many ways Days Of Heaven might’ve been different, had the casting gone as originally planned, or had Malick and Weber not tinkered for two years in the editing room. But the biggest revelation is that Linda Manz’s voiceover narration, which is so integral to the flavor of the film, was at one point going to be a dialogue instead of a monologue. Given the way Malick uses Manz—who’s unlike any of the narrators in any of his other films—that one change could’ve altered not just the tone, but the entire meaning of Days Of Heaven.

The New York City-born Manz was in her early teens when she was cast in Days Of Heaven, and hadn’t done much acting outside of the classes forced on her by her mother—a cleaning woman in the World Trade Center, according to a 2011 Village Voice profile. On the Criterion disc, Malick’s collaborators say that Manz was so green that on-camera, she frequently slipped up and called Richard Gere “Richard” and Brooke Adams “Brooke,” instead of their characters’ names. That’s why Manz’s character is named “Linda,” to make it easier on the actress—and it’s also why her performance is so natural and unaffected.

“The whole movie could be read as the story of one gawky city kid, far away from the world she knows, learning how to be a woman from the examples set by her brother’s girlfriend and by the other teenagers working through the season at the farm.”

The major players in Days Of Heaven have a big load to carry, with Gere and Adams playing secret lovers Bill and Abby, posing as brother and sister while working for a rich, sickly Texas farmer (Sam Shepard) who’s smitten with Abby. Manz, meanwhile, playing Bill’s actual sister, is mostly along for the ride, watching the story unfold out of the corner of her eye. For her narration, Manz watched footage from the film and extemporized, at times retelling the story as she recalled it from the script, at times describing what she saw on the screen independent of the movie’s actual plot, and at times using her own words to recount apocalyptic stories, taken from the Bible and a paleontology textbook. Just as Malick did with his 1973 debut film Badlands, for Days Of Heaven he shot a film with a lot of dialogue, then pared as much of it away as he could in the editing room, replacing it all with one idiosyncratic voice—described in the commentary track as “like Little Orphan Annie.”

If the double-narrator idea had panned out, the Days Of Heaven voiceover would’ve had Manz chatting with Jackie Shultis, who plays “Linda’s Friend” in the film. Malick didn’t revive the idea until his next film, The Thin Red Line, made 20 years later. But the chorus of voices in that film—and the three Malick films that have followed since—aren’t in conversation, and are rarely commenting directly on what’s happening onscreen.

Malick skeptics often complain that since his return to filmmaking after that 20-year hiatus, he’s been using the same post-production process he honed on Days Of Heaven to turn vastly different kinds of stories into the same impressionistic mishmash. The Pacific theater of World War II? The founding of Jamestown? A memoir of growing up in Texas in the 1950s? A transcontinental tale of romance and heartbreak? By the time Malick removes all the talking and inserts shots of animals and swaying grass—and slaps on the poetic voiceovers—some say his movies all drift off into the same esoteric fog.

Days Of Heaven, though, uses those techniques in service of a strong narrative—even stronger than the one in Badlands, which is a true-crime story light on plot and heavy on lyrical interludes and comical irony. At one point in the late 1970s, Malick intended to follow Days Of Heaven with his Pocahontas film The New World (which finally arrived in 2005), and the two films are very similar in the way they depict a dreamy paradise spoiled by human lust, greed, and vanity. But Days Of Heaven is more focused.

The film opens with Bill getting in trouble with the law in Chicago, then follows him, Abby, and Linda down to Texas, where they fall in with a familial group of migrant workers and have a good life toiling in the fields for The Farmer—that is, until Bill comes up with the idea that Abby could marry her dying boss, and inherit all his money and property. As the plan takes longer to unfold than they expected, Bill and Abby become less cautious about hiding their relationship. Everything falls apart when the wrath of nature intercedes, via an infestation of locusts and a raging fire. 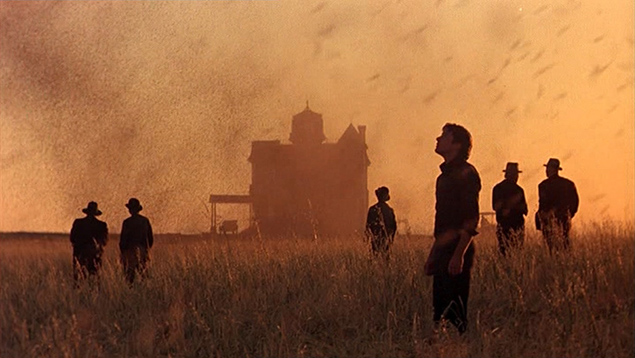 Days Of Heaven is more of a direct Biblical allegory than The Thin Red Line, The New World, Tree Of Life, or To The Wonder—even though each of those films features characters who muse inwardly about their relationships with God and his Edenic creation. In Days Of Heaven, after the heroes sin, they suffer plagues, and they’re expelled from a land where, as Linda puts it, they had “nothin’ to do all day but crack jokes, lay around.”

But the wryness of that line from Linda has a lot to do with why Days Of Heaven comes across as so much more “normal” than Malick’s other films. The people in Days Of Heaven have church services out in the swaying wheat fields, surrounded by God’s creatures, and they talk seriously about how they “have to accept what the Lord grants,” before facing a righteous judgment that, as filmed by Malick, resembles hell on earth. Yet Days Of Heaven’s main characters don’t feel abstract or iconic, the way figures in an allegory often do. When Bill goes hunting with The Farmer, his anxiety that he may kill or be killed by his rival feels human, not mythopoetic. And whenever Bill surreptitiously kisses Abby, it’s nervous-making because the stakes seem so real. It isn’t their immortal souls on the line, but their livelihood and happiness.

The reason the scale of Days Of Heaven is exactly right is because the person telling the story isn’t Bill, Abby, or The Farmer; it’s Linda. The whole movie could be read as the story of one gawky city kid, far away from the world she knows, learning how to be a woman from the examples set by her brother’s girlfriend and by the other teenagers working through the season at the farm. Linda is no blank slate; she’s funny, and has a dark imagination. (When she sees strangers on the riverbank as she, Bill, and Abby eventually escape from the farm, she thinks, “They were probably callin’ for help or somethin’, or they were tryin’ to bury somebody or somethin’.”) Linda isn’t an innocent, exactly, but her interpretations of her brother’s schemes is like something a kid trying to sound grown-up would come up with. 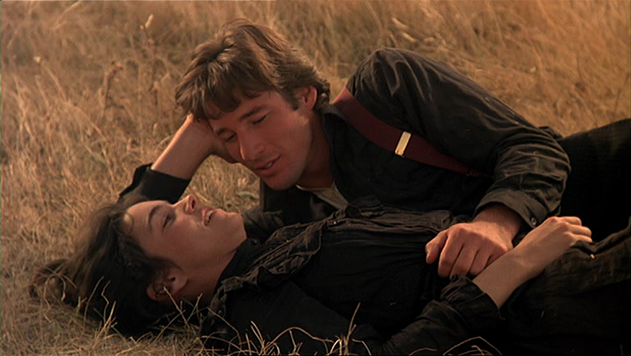 The last line of Days Of Heaven is decidedly non-grandiose: “Maybe she’d meet up with a character. I was hopin’ things would work out for her. She was a good friend of mine.” It’s spoken by Linda about her friend from the farm, whom she meets again at the end of the film, on the road. This is the friend Linda would’ve been conversing with in voiceover, if Malick had been able to get that conceit to work the way he wanted to. It’s better the way things worked out, because this single voice is so much more personable than the yearning Voice Of Man that Malick has used in his more recent films.

Those movies are powerful too, in different ways. With Days Of Heaven, though, Malick arrives at the same big questions about humanity’s place in the kingdom of God, but follows a more remote, intimate path. He gets there by listening closely to Linda, which is like listening in on a kid at bedtime, as she reads adventure stories to herself and then says her prayers.