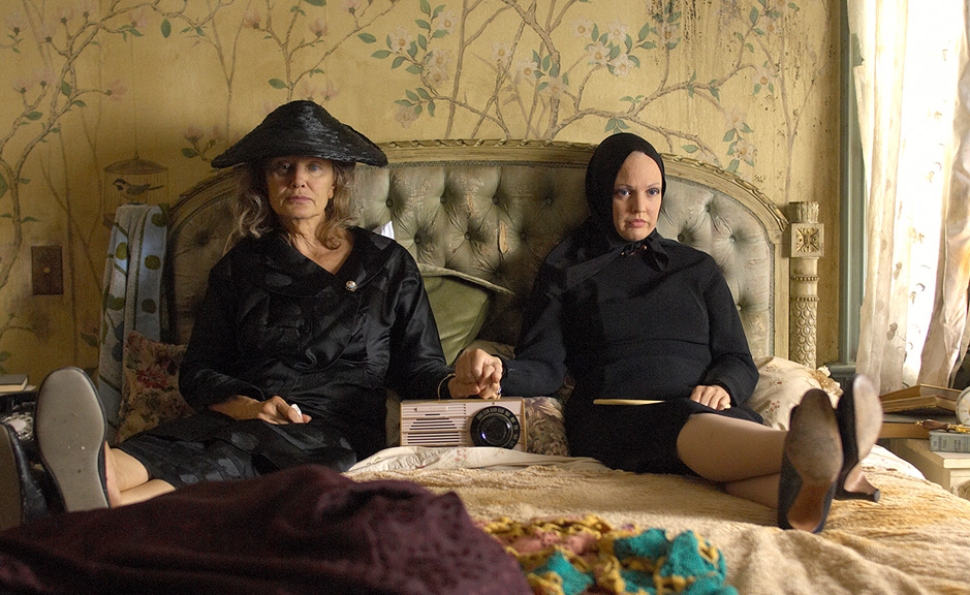 Documentary is one of the most discrete genres, rarely inspiring thoughts of sequels, franchises, or spin-offs. As with any rule, there are exceptions—the multiple Paradise Lost films, Werner Herzog reinventing his own documentary Little Dieter Needs To Fly as the narrative feature Rescue Dawn, the upcoming Act Of Killing “sequel” The Look Of Silence—but in general, documentary films tend to be stand-alone propositions: a slice of life, a glimpse of an unusual or unfamiliar world, or an overview of a compelling issue. But something about Albert and David Maysles’ 1976 documentary Grey Gardens has stuck in the popular imagination, turning what was originally intended as a portrait of two recluses into source material, a launching pad for a much broader cultural examination of what is at heart a singular, isolated story.

Appropriately, Grey Gardens’ afterlife began in earnest around the time “Little Edie” Beale died in January 2002. (Her mother, “Big Edie,” died in 1977, almost a year to the day after the documentary premièred.) The cult of the Edies had already been percolating for a while, primarily in the fashion and gay communities; for example, Rufus Wainwright’s 2001 album Poses includes a song titled “Grey Gardens” that includes snippets of Little Edie’s dialogue, though the song itself doesn’t have a particularly strong thematic link to the Beales or the Maysles’ film. But Little Edie’s death closed the book on the “official” story, and set the legend of Grey Gardens in stone. And almost immediately, fans and creators began carving new stories from that stone.

In October of 2002, just nine months after Little Edie’s death, Playbill revealed that Grey Gardens was being “transformed” into a new musical by composer Scott Frankel and lyricist Michael Korie, with a book by Doug Wright. Little Edie was aware of the proposed musical in her lifetime, giving the project her blessing in a letter to Albert Maysles shortly before her death: “I am thrilled by what you wrote about the musical ‘g.g!’ My whole life was music and song! It made up for everything! Thrilled—thrilled—thrilled!” It’s likely Little Edie would have been thrilled with the end product, as well. It debuted Off-Broadway in 2006, with Tony-winning actress and singer Christine Ebersol in the dual role of Big and Little Edie. It went on to Broadway, where it netted three Tony awards, including one for Ebersol. Unlike the documentary, the Grey Gardens musical places the Beales—and their dilapidated home—back at the tail end of their aristocratic heyday in the early 1940s, in the first act at least. The second act, wherein the actress playing Big Edie in the first act assumes the role of the 50-something Little Edie, closely follows the material of the Maysles’ film. 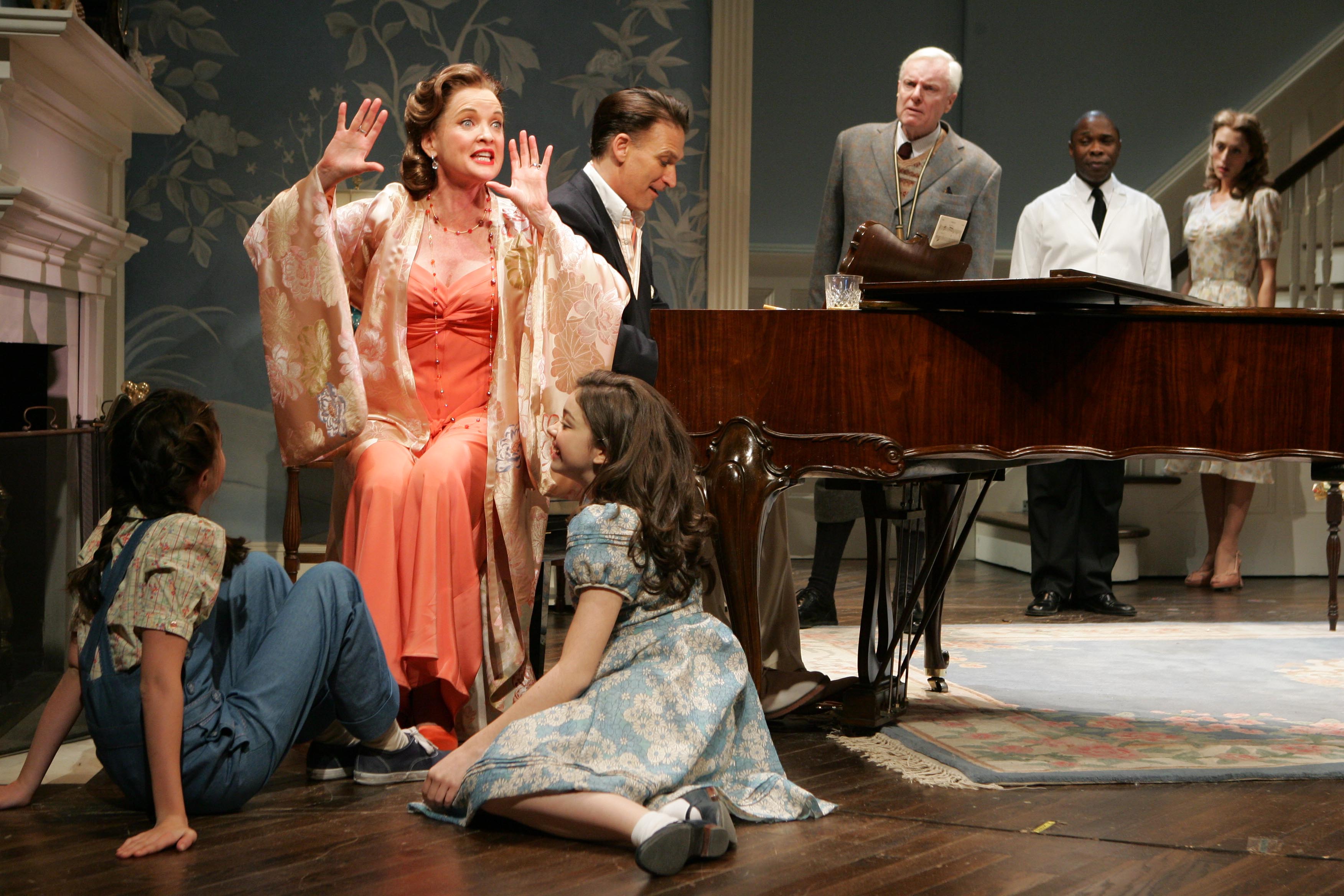 A few years later, in 2009, HBO took a similar tack with its own Grey Gardens film, casting Jessica Lange and Drew Barrymore as Big and Little Edie, respectively, and using old-age makeup to transition the actresses through the decades in a story that begins a little earlier than the musical, and works its way up through the filming, première, and immediate aftermath of the Maysles’ film. The musical’s approach to time-shifting the material is arguably more effective, in that having the same actress play both roles helps underscore the dysfunctional psychological bond between the two women, the bond that kept Little Edie trapped in a town and a house she purported to hate because her mother wouldn’t, or couldn’t, leave. The HBO film is similarly attuned to this bond, but it’s much blunter about it, concerned more with establishing a chronology of events and giving its stars big, meaty monologues and dialogues to chew on.

What’s unusual about Grey Gardens’ afterlife is that the original documentary factors so heavily into these subsequent stories. Unlike something like Rescue Dawn, which translates the events of a documentary to a narrative structure, the Grey Gardens documentary is a plot point in its own spin-offs. The Grey Gardens musical and HBO film are both structured around the filming of the original documentary; in the HBO film, Albert and David Maysles are actual characters (played by Arye Gross and Justin Louis), and in the musical, the audience stands in for the Maysles’ cameras, with the performers more or less reenacting the documentary, or at least the events surrounding its filming. Both also reference and re-create specific lines and images from the film, most notably Little Edie’s iconic “best costume for the day” speech. The initially off-the-cuff sartorial ramblings of an eccentric—or perhaps not so off-the-cuff, given Little Edie’s deeply ingrained performative instincts—became a catchphrase, a summation of a character. Accordingly, it’s the basis for the musical’s second-act opener, “Revolutionary Costume For Today,” where the actress who was playing Big Edie is reintroduced as her own daughter, 32 years later. In addition to serving as a place-setting prelude, subbing in for the montage of news clippings that opens the Maysles’ film (right down to the “mean, nasty, Republican town” pull-quote), it’s a showcase number, born of the singular charisma of one of cinema’s greatest oddballs.

The HBO film takes an even more literal approach to its re-enactment of that scene, but it also reads between the lines and extrapolates entirely new scenes from moments in the documentary. Big Edie’s “accompanist,” George Gould Strong, is mentioned in the original Grey Gardens, when Little Edie puts on a record her mother recorded with Gould in 1934; Big Edie’s ensuing sing-along to “We Belong Together” is one of the film’s most memorable moments. The HBO film includes a scene in the 1930s when Big Edie and Gould (played by Malcolm Gets) sing that exact song, as well as another set at a party where Big Edie and Gould perform “I Won’t Dance” and “Can’t Help Lovin’ Dat Man,” the latter of which includes an interlude where she invites her daughter to perform a soft-shoe, just as the real Big Edie did at age 80 in the Maysles’ film. (Unlike in the documentary, Drew Barrymore’s youthful Little Edie happily indulges her mother’s request.) The two Edies’ love of song and dance, one of the main forces binding them, is apparent in the documentary, but it’s also been diluted and acquired a patina of desperation. The HBO film and the musical re-establish them in their prime, showing the full bloom of the wilted passion we see in the documentary.

Both the musical and the HBO film make a relatively major character of Gould, and characterize his presence in Big Edie’s life as a contributing factor in the estrangement of her husband, Phelan Beale, who eventually divorced his wife via telegram in 1946. In most productions, the musical depicts Gould as flamboyantly homosexual, while the HBO film is a little more ambiguous, playing up a flirtatious relationship between him and Big Edie that could easily be construed as romantic. The actuality of their relationship remains in the realm of rumors—Gould’s family maintains he wasn’t gay, and Edie’s friend Lois Wright, who appears briefly in the documentary during the birthday party, has said that he and Edie were lovers—but the fact that two very different characters were drawn from the same original offhand reference speaks to the wealth of stories and personalities to be found in Grey Gardens’ raw material. 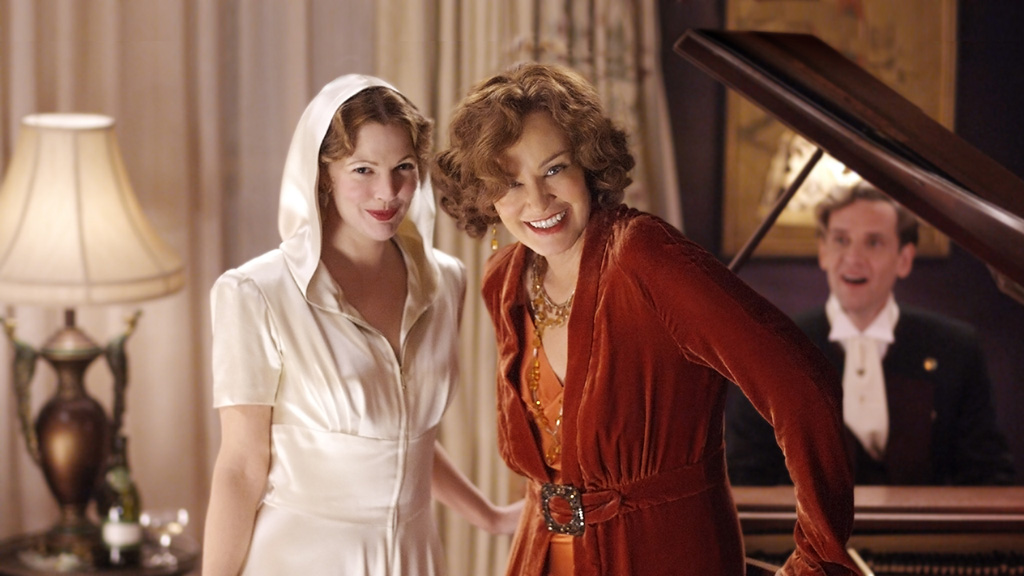 The cult of personality that’s grown up around Little Edie especially is based in how she presented herself in the documentary: a singing, dancing, costume-creating force of nature whose insecurities are part and parcel of her charisma. Though she was, by many accounts, a fashionable debutante in her younger years, when fashion designers and drag queens reference Little Edie, they’re referencing the fiftysomething in a homemade turban, not the “Body Beautiful” Beale of the pre-war years. Similarly, while Big Edie was reportedly an outlandish, charismatic life-of-the-party type in her aristocratic prime, she’ll always be remembered first and foremost as a cockeyed geriatric warbling “Life Is A Song” from her bed. It’s ironic, and even a little tragic, that the project the women entered into—perhaps foolishly—in part to document and maybe even hold on to a little piece of their family’s past glory captures them at their least glamorous. Perhaps that’s why projects like the musical and HBO film return to the past; seeing that lost glamour in its original, undiluted state both reinforces the tragedy of the Beales’ downfall, and deflects a bit of the exploitative undercurrents of the original film that famously caused the New York Times’ Walter Goodman to question whether the Maysles were being kind or cruel by depicting the Beales in this state. Both Little Edie and the Maysles strongly disputed this, though it’s worth noting that the HBO film portrays Big Edie as being at least a little concerned when she sees the finalized film, but she doesn’t say anything in the face of her daughter’s rapturous excitement over “her movie.”

These projects’ reliance on a partially invented past is also attributable to the simple fact that there wasn’t all that much story left to tell past the chapter the Maysles captured. When Big Edie died, Little Edie sold Grey Gardens and lived a reportedly happy life, but any subsequent notoriety she attained was tied directly to her mother and the film. For their part, the Maysles brothers returned twice to Grey Gardens, first in 2006 for the “sequel” The Beales Of Grey Gardens, which is composed of unused footage from the original shoot, and a year later for “Grey Gardens: From East Hampton To Broadway,” a presentation of PBS’ Independent Lens that gives an overview of the musical’s conception and realization.

The original Grey Gardens captures the Edies, and their house, close to their lowest point; many viewers don’t realize the Maysles began filming after Big Edie’s cousin, Jacqueline Kennedy Onassis, stepped in and paid $30,000 to help restore the house to a livable condition, meaning the version of the Beales we see in the Maysles film represent a huge step forward from where they had been. With that nadir already immortalized in the film, the subsequent cult of Grey Gardens has helped restore an aura of glamour and dignity to the women and their home, both literally and metaphorically. The canonization of Little Edie as a camp icon, the glossy photo collections, the musical and HBO film’s trips back through the past, even the restoration of Grey Gardens itself: All have served to polish the Beales’ image in the cultural perception. Though both Edies chased fame and courted the entertainment industry in their younger years, it wasn’t until they retreated from society and laid bare their faults and failings that pop culture was able to see them as they stars they were, and treat them accordingly. Now that’s revolutionary.

Our Movie Of The Week discussion of Grey Gardens ends here. Don’t miss Tuesday’s Keynote and the accompanying dialogue about the film. Next week, we take on Ang Lee’s 2000 wu xia blockbuster Crouching Tiger, Hidden Dragon.