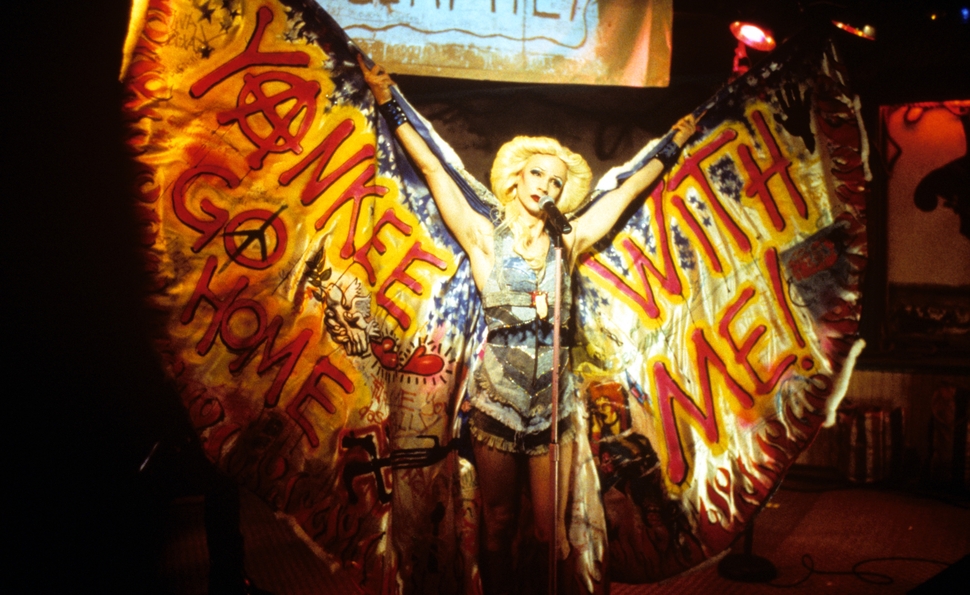 The two worlds of Hedwig And The Angry Inch

I was born on the other side
Of a town ripped in two
I made it over the great divide
Well now I’m coming for you.”
—“Tear Me Down”

Thematically, Hedwig And The Angry Inch is a story of division and reconciliation. This is spelled out explicitly in many of the musical’s songs, particularly “Origin Of Love,” which breaks down the idea, put forth in Plato’s Symposium, that humans were split apart by Zeus and must spend their lives searching for their “other half” so they can be whole again. But it’s also there in the repeated references to the Berlin Wall, whose shadow little Hedwig—née Hansel—grew up in. That wall necessitated the operation that separated Hansel from his penis and left him with the titular “angry inch,” a lasting symbol of his physical division from his male-ness. Even Tommy Gnosis, Hedwig’s protégé-turned-lover-turned-nemesis, is a sort of fragment— Hedwig’s songs, creativity, and trust in others, all manifested in a less-abrasive, more-commercial teen-idol context.

There’s no neat word to describe Hedwig: It’s problematic to describe her as transgender, since her sex-change operation was both unwanted and incomplete, and she never identified as a woman trapped in a man’s body. She isn’t precisely a drag queen, since her performance persona extends beyond the stage and into day-to-day life. Hedwig is a gay man without the physical “maleness,” who publicly identifies as female for want of a better option. It’s impossible to define Hedwig by what she is or isn’t; Hedwig is just Hedwig, a being of love, creativity, and Borscht-belt humor, irrevocably affected by the divisions that have created her, but not defined by them. (Hence the use of the female pronoun in our Movie Of The Week discussions, referring to the gender of the performance, if not precisely the performer.)

The film adaptation of Hedwig And The Angry Inch is a similarly neither-here-nor-there proposition: It’s a stage musical adapted to film that uses the language of both media to create something unique, something defined not by its form or function, but by the one-of-a-kind presence at its center. The things that make Hedwig work as a film—its compression and structure, its playful editing, its attention to visual detail—are all accoutrements. The wig and makeup and dresses, if you will. But Hedwig’s DNA belongs to the stage, and it’s as apparent and impossible to deny as Hedwig’s Adam’s apple and visible body hair.

The film’s stage origins are most readily recognizable in the film’s commitment to cabaret-style live performance. Hedwig usually, with one notable exception (see below), performs to a visible audience from behind a microphone, an extension of the original stage musical’s use of exclusively diegetic music. Every song that’s sung, and every story told, is in the context of a performance, even if that performance is for one person on the Porta-Potty-adjacent ninth stage at the Menses Fair. Even when the film diverts slightly from this premise, as in the animated “Origin Of Love” sequence, it still has one foot in the “performance” reality: Hedwig is performing “Origin” for the ever-nonplussed audience at an eatery chain called Bilgewater’s. Meanwhile, we’re watching the animation, which is also being projected on a bedsheet for the audience within the film. Even when we divert from the source, we remain connected to it. 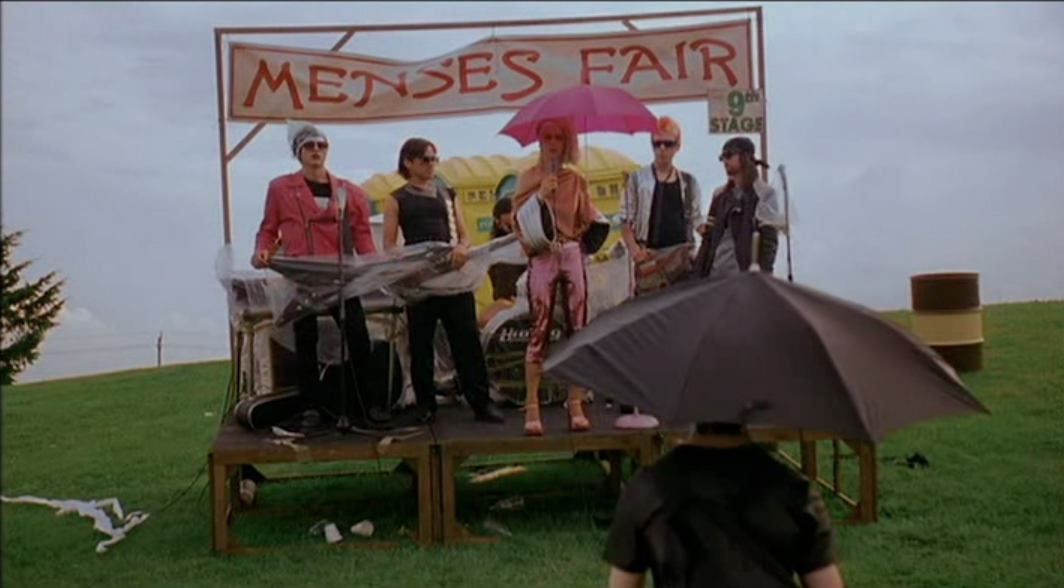 The running gag of Hedwig and her band, The Angry Inch, following Tommy Gnosis on tour by performing in a string of run-down Bilgewater’s outposts was a matter of necessity: The original screenplay had the band playing a variety of venues, including an airport lounge, bowling alley, and rest stop, but the film’s $6 million budget required a cheaper solution. And so one Bilgewater’s set became all the Bilgewaters, re-dressed and shot from different angles. It’s a practical solution born of problems specific to filmmaking, but performing and shooting a large section of the film on a single, mutable set is reminiscent of a theatrical production as well. (As an added nod to the original Off-Broadway production, there’s a mural of the Titanic on the wall of Bilgewater’s, a reference to Hedwig’s genesis at the Jane Street Theater, a venue that at one time housed survivors of the famous wreck.) Bolstering this impression of theatricality, writer-director-star John Cameron Mitchell performed all his Hedwig vocals live on set, over a pre-recorded instrumental track. This approach isn’t unique in movie musicals (see also: Tom Hooper’s 2012 adapation of Les Misérables), but it is highly unusual, and in keeping with Hedwig’s theatrical lineage. In the making-of doc “Whether You Like It Or Not: The Story Of Hedwig,” songwriter Steven Trask says the impetus for filming the movie’s songs live was “putting on a show… [creating] the sense that it was a live event.” Very few musical films besides concert documentaries can claim to capture the spirit of live performance, but Hedwig gets damn close.

Having originated and played Hedwig onstage for 10 months, seven shows a week, Mitchell brings an energy and presence to his film that’s inextricable from its appeal and success. Even though many other actors took up the blonde winged wig after Mitchell left the production—including Michael Cerveris, Donovan Leitch, and Ally Sheedy in the original off-Broadway run, and Neil Patrick Harris and Andrew Rannells in the recent Broadway reconceptualization—the role will always belong to Mitchell. Perhaps that’s why New Line executives and producers suggested he direct the film, despite the fact that at this point in his career, Mitchell was more of a film buff than a filmmaker: He initially bonded with Trask over a biography of Rainer Werner Fassbinder the latter was reading on a plane, and could cite inspirations like Hal Ashby, Robert Altman, and Bob Fosse when conceiving his vision of the film, but he was largely untested behind the camera. As evidenced by the film’s captivating musical numbers, Mitchell could have simply filmed the stage production as a more or less straight translation, and likely would have come away with an engaging, enjoyable product. But he didn’t. Like Hedwig pulling that wig from a box, he incorporated elements of a different form to create something new, different, and exciting.

Hedwig’s flashbacks to his time as Hansel in East Berlin are some of the most overtly cinematic moments in Hedwig. In these scenes, more than any set in the present day, Mitchell uses the movie camera—and rich, detailed set direction from production designer Thérèse DePrez—to convey details and flavor that the truncated script leaves out in condensing a two-hour-plus play to a 95-minute movie.

Some of these moves are overt and flashy, like the sequence of young Hansel playing in the oven, which segues into adult Hedwig in the same oven, talking about “listening to the American masters—Toni Tennille, Debbie Boone, Anne Murray—who was actually a Canadian, working in the American idiom”—as the camera slowly rotates, literally turning Hedwig’s world upside down when she talks about discovering the “crypto-homo rockers—Lou Reed, Iggy Pop, David Bowie—who was actually an idiom, working in America and Canada.” Some are more subtle and savvy, like the way the East Berlin shots are all static and full of horizontal and vertical lines and boxes, suggesting both a prison and a proscenium. In addition to calling back visually to the film’s stagebound origins, this heightens the sense that Hedwig views her past through the framework of myth and drama—these aren’t memories, they’re scenes from an epic tragedy, narrated by Hedwig and performed by actors on a set in her mind. 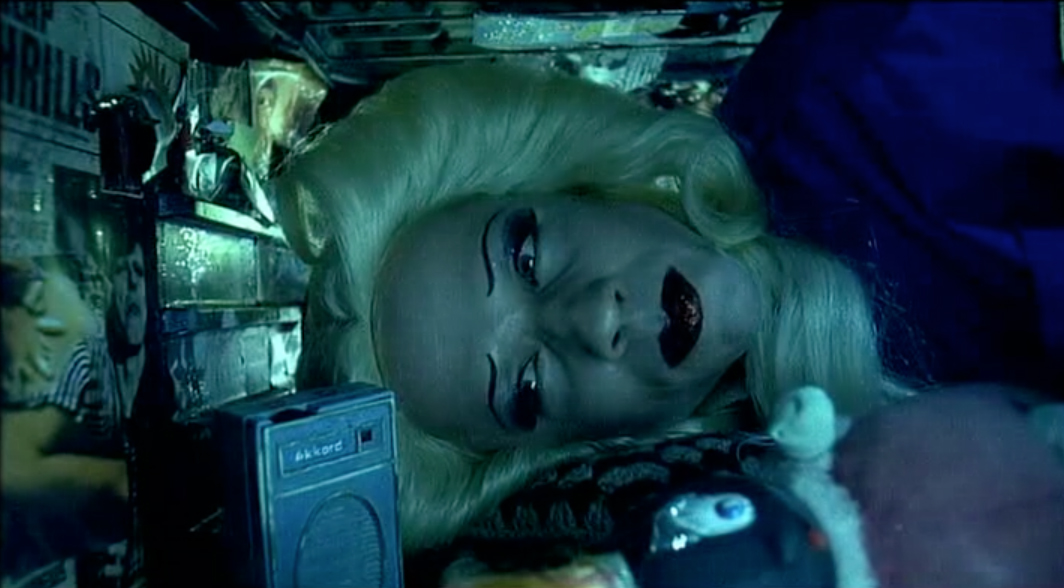 This tension between past and present, and between the conventions of the stage and film, comes to a head in the film’s best, brightest, boldest musical number, “Wig In A Box.” Occurring almost exactly at the film’s midway point, “Wig In A Box” is when the Hedwig/Hansel of the past gives way to the Hedwig who’s been our guide through this story. It’s also, notably, the only song in Hedwig not performed in front of an audience of at least one, the only song that departs from the real-world construct of live performance and gives into the fantasy construct of movie musicals. This is the moment when Hedwig finds a way to disengage from her past by diving into fantasy, and when Hedwig dances on the line separating live theater and film.

The sequence begins with the Hedwig of the present stage-diving into the air during a performance of “Angry Inch,” flying through an animated interlude, and literally plopping down in the past. She drops, dazed, into a chair in a trailer in Junction City, Kansas, where the sugar-daddy soldier responsible for bringing her to America (at least, her minus five inches or so) has left her for a younger, presumably more complete specimen. The boxes and lines of the past are still present, but not for long. 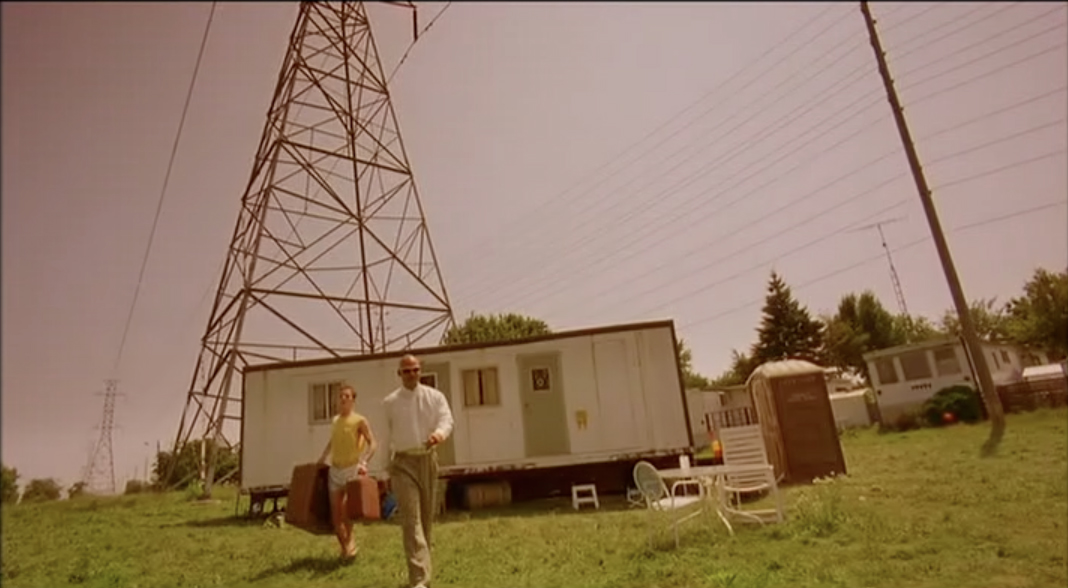 Footage of the Berlin Wall coming down plays on the TV in the trailer, underlining the futility of the sacrifice Hedwig made to come to America, and emphasizing the introduction of a new era.

As Hedwig begins singing, suddenly the previously static camera is in motion, guiding us into a fantasy realm where the members of Hedwig’s band (including Trask as keyboardist Skszp) wait outside her trailer, providing musical accompaniment as they wait for past-Hedwig to invite them into her world. And she soon does, as the song transitions from a slow, self-pitying ballad to an empowerment anthem, and the cinematic dream-theater gives way to full-on performance, one that involves Hedwig literally kicking down the wall of the box she’s living in to turn it into a stage. On this stage, she finds the freedom to define and express herself on her own terms, and share that freedom with the world. And the movie follows suit, turning the sing-along portion of the song into an actual sing-along—with words along the bottom of the screen and a bouncing wig keeping time—actively inviting the audience to become participants in Hedwig’s story.

With “Wig In A Box” breaking down the fourth wall—literally—Hedwig the character and Hedwig the film are free to play by their own rules. Both character and film have a past, both have changed form and mutated along the way, and both are too unique to slot easily into any sort of box, whether of gender or medium. They both belong to two worlds, and both have found a way to bridge the divide. Hedwig’s present is inextricable from her past, just as Hedwig’s filmmaking is inextricable from its theatrical origins. They’re two parts of the same whole.

Our Movie Of The Week discussion of Hedwig And The Angry Inch continues tomorrow with a staff forum on the film’s portrayal of glam and punk, fame and infamy, and the American Dream. Then on Thursday, Matthew Dessem, spinning off from the film’s Emily Hubley-created animated sequence, explores the history of the Hubley animation family.