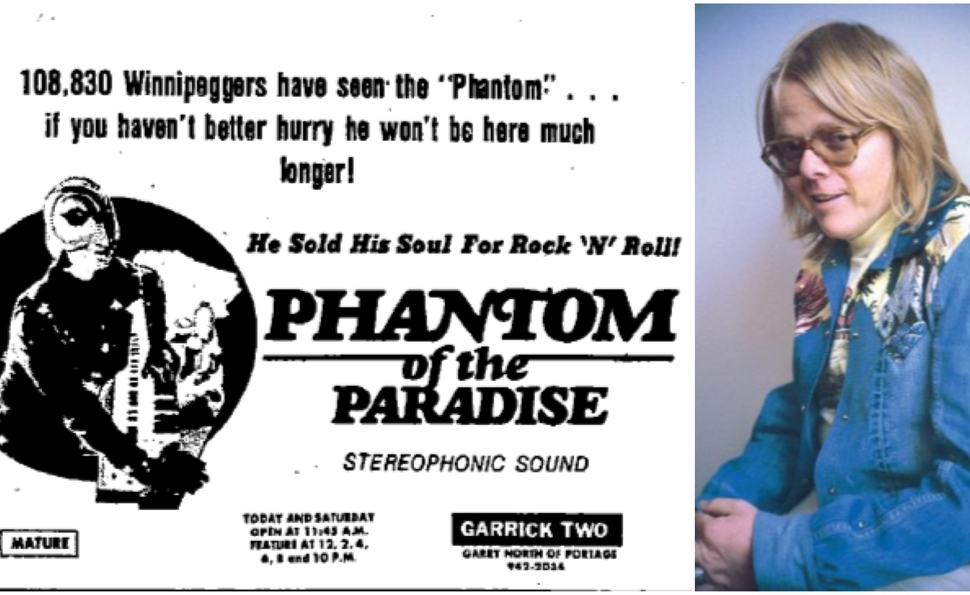 In Stephen Kessler’s Paul Williams Still Alive, a 2011 documentary about the once-ubiquitous singer-songwriter who disappeared from from the public eye, Williams stands in front of a rapturous Winnipeg crowd and tells them, “You know, this doesn’t happen to me everywhere I go. You might find this hard to believe, but this almost never happens.” That’s indubitably true: Kessler follows the largely forgotten Williams on tour as he performs mostly in tiny hotel lounges. For larger crowds, he has to tour the most dangerous areas of the Philippines.

But in Winnipeg, Williams is a star. How could he not be? He’s Swan from Phantom Of The Paradise.

Like many a movie that went on to become a cult favorite, Phantom Of The Paradise was a disappointment on its initial release. In an interview on Shout!Factory’s new Blu-ray release of the film, producer Edward R. Pressman blames the film’s poor showing on an advertising campaign that couldn’t decide whether the film was horror, a musical, or a comedy. The confusion may have been representative of the film itself, a satirical rock opera that draws no obvious line between the satire and the opera, but the marketing didn’t give potential audience members a clear idea of what to expect.

Yet for whatever reason, Phantom Of The Paradise was a massive success in Winnipeg, Canada. It played for 18 straight weeks at the city’s Garrick Cinema. Williams performed two sold-out shows the summer after its release, and the soundtrack to the film was certified gold in Canada, mostly due to sales in Winnipeg. Over the years, the film became an institution, popping up regularly at local repertory theaters for midnight screenings and weaving itself into the city’s mythology. In 2000, the local IMAX even played Phantom for a weekend. In 2005, a few local fans organized Phantompalooza, a convention featuring actors William Finley (Winslow/The Phantom) and Gerrit Graham (Beef). The next year, with the encouragement of Finley, they organized the even larger Phantompalooza 2, featuring performances from Williams, Jessica Harper (Phoenix), and a reunion of The Juicy Fruits, the band that opens the film.

Why Winnipeg? Doug Carlson, a Phantom fan who helped organize the Phantompalooza conventions, gives some serious thought to the question on his Phantom fan site, though he admits that doesn’t have an answer. “We seem to have an unlimited capacity for eccentricity in Winnipeg,” he told me, citing WWE wrestler Chris Jericho as an example. A more apt weirdo for this discussion might be filmmaker Guy Maddin, whose films tend to reimagine silent cinema as a feverish world where dream logic takes hold. The deeply personal My Winnipeg mythologizes Maddin’s hometown as an absurdist Freudian nightmare, where horse’s heads appear above the frozen river surface every winter, and the most popular television series is LedgeMan, about a man whose mother talks him down from the ledge of a tall building in every episode. In an interview a few years ago, Maddin told The A.V. Club, “I didn’t even get into Phantom Of The Paradise in My Winnipeg. It was too big of a subject.” 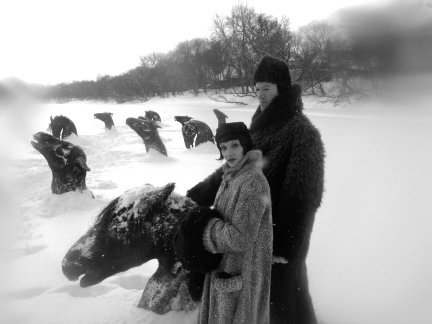 Americans may know Winnipeg best from a 2005 episode of The Simpsons where Homer and Abe travel across the border to smuggle prescription medication back to Springfield. “We Were Born Here, What’s Your Excuse?” says the sign welcoming visitors to the city. In Canada, Winnipeg has a reputation for weirdness, heightened by its coldness and isolation. It’s a cliché to say that Canada is cold, but Winnipeg is really fucking cold. January temperatures average around 0 degrees Fahrenheit, and sometimes go as low as -40 degrees F, which is when the city inevitably warns residents not to leave their house. In that temperature, exposed skin can fall prey to frostbite in less than 10 minutes. “It’s a brutal, brutal environment here,” Carlson says. “If you can survive six to eight months of the year in a Winnipeg winter, then you’re pretty much set for anything.”

It was in the middle of one of these winters, on December 26, 1974, that Phantom Of The Paradise opened in Winnipeg. Carlson says its original audience was young, with many of the audience members only around 10 years old. (That claim is put into question by a number of newspaper clippings on his website that refer to the audience members as “teenyboppers.”) “There were no adults in the theater,” Carlson says. “It was a huge group of kids our age that seemed to be unattended or unsupervised.” In an interview on the new Blu-ray, Paul Williams awkwardly suggests that his “non-threatening sexuality” may have had something to do with the film’s appeal to that age group, which is a comment that probably should have been left unsaid. Phantom is colorful, imaginative, and full of catchy songs, but it also features a man getting half his face burnt off by a record press, nonchalant use of drugs by a number of characters, and a pre-coital love scene between Swan and Phoenix.

Regardless, it became a weekly ritual for young Winnipeggers, playing into May of the following year, and encouraging repeat visits. A columnist for the Winnipeg Free Press claimed he had met many people who had seen it 13 or 14 times. “In many ways, it was almost like a big rock ’n’ roll party for us,” says Carlson. “At that age, the most subversive thing we might have seen would have been Herbie Goes To Monte Carlo or something.” Perhaps the permissiveness of Winnipeg parents played a role in Phantom’s success, but the film may have also been a generation’s introduction to rock ’n’ roll. For this audience, Williams’ glam rock played as the real thing, their first introduction to “adult” music, a ripe starting point for a film and musician whose reputation within the city grew with nostalgia and age.

In summer 1975, Williams solidified the film’s popularity in the town by holding two sold-out shows, again mostly attended by so-called “teenyboppers.” While he sang a number of the hit songs he wrote for The Carpenters and Three Dog Night, the crowd was there to see his numbers from Phantom Of The Paradise. According to Andy Mellen’s review of the show in the Winnipeg Free Press, much of the singing was “drowned out by the constant screaming of ‘We love you, Paul’ from the majority of his adolescent following.” He even had a phony ceremony during the concert in which he was presented a gold record for the Phantom soundtrack. (A skeptical Winnipeg Tribune writer checked with the record company and discovered the award had already been presented in Toronto.) In Winnipeg, the isolation of this phenomenon meant that the locals had no idea Williams wasn’t equally beloved elsewhere in the world, or that Phantom had only played modestly in every other city. “None of us really knew that it bombed everywhere else,” says Carlson. In Winnipeg, where the film regularly played in local repertory cinemas over the next few decades, Phantom Of The Paradise was a classic like any other.

Located in the middle of the Canadian prairies, Winnipeg is an island of civilization unto itself. Far away from both coasts and the Great Lakes, the nearest major city is Minneapolis, 734 kilometers (sorry, 456 miles) to the south. If you ask Google Maps the fastest route from Winnipeg to Toronto, it’ll take you through North Dakota, Minnesota, Wisconsin, Illinois, Indiana, and Michigan before getting you back into Canada. This isolation meant a lot more in 1975, before the Internet and cable television closed the cultural distances between cities. For Maddin, the revelation that the rest of the world didn’t share Winnipeg’s enthusiasm for the film was a shock: “[I] thought it was one of the iconic great films for so many years, because as a Winnipegger, it was so huge in the local zeitgeist, the civic-geist. I couldn’t believe when I later found that among De Palma buffs, it’s ranked like the 40th-best of his films.” 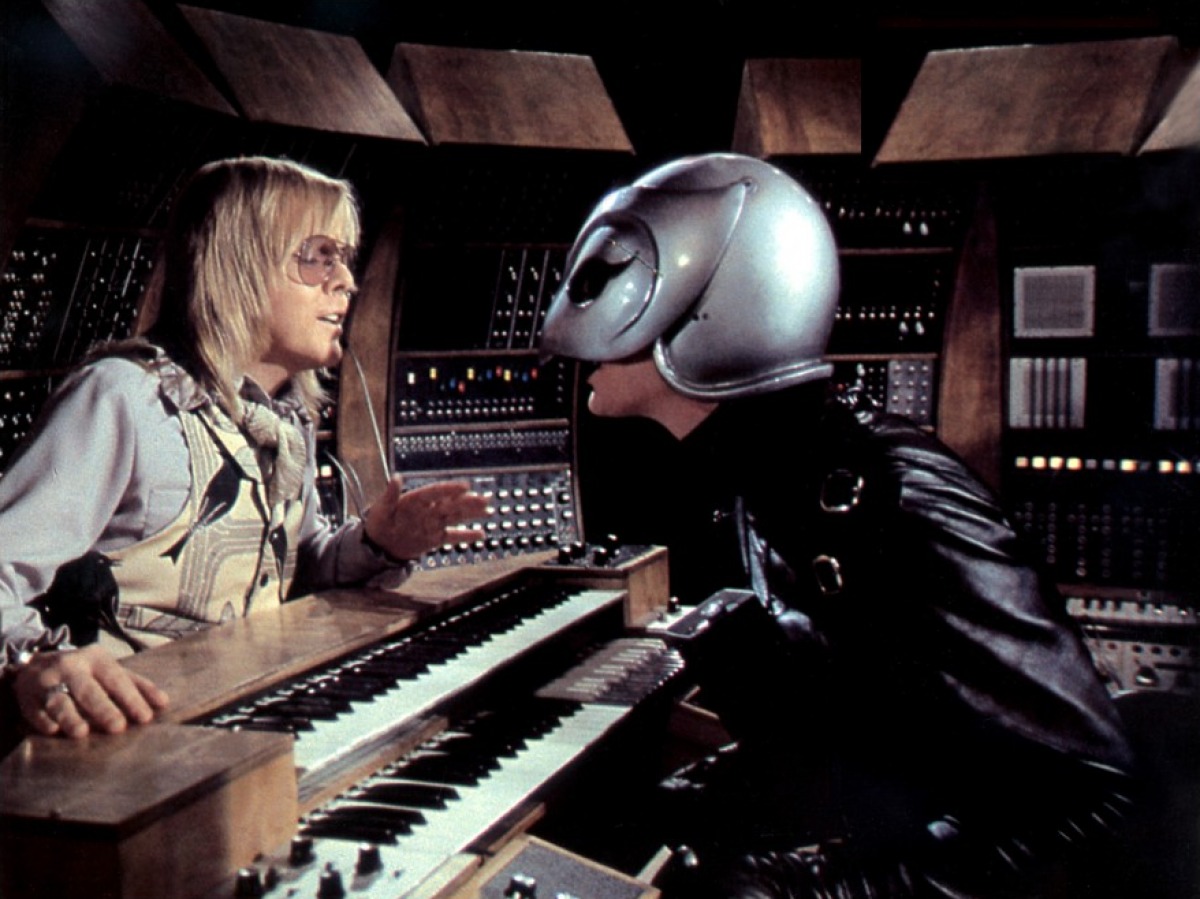 It’s easy to draw comparisons between Phantom Of The Paradise and Rocky Horror Picture Show. Both films were released around the same time, both films flopped at the box office, and both films were resurrected by a cult following. But even though some fans came to the Phantompalooza conventions dressed as their favorite characters, Carlson assures me that even the most enthusiastic fandom surrounding Phantom Of The Paradise is something of a different beast. “The difference between this and going to a screening of Rocky Horror is that Phantom fans like to watch the movie,” says Carlson. “It’s really rare to see any kind of disruption in the audience when you’re trying to watch the movie, because I think there’s a lot more to appreciate in Brian De Palma’s movie than in Rocky Horror.” (Carlson adds that he’s reluctant to offend any Rocky Horror fans who might be reading.)

Winnipeg created an alternate universe within its city limits, one in which Paul Williams is a superstar, and Phantom Of The Paradise is not just a box-office hit, but an entry in the canon of great cinema. It’s a scenario that can’t be repeated, not just because of changes in viewing patterns and film distribution, but also because Winnipeggers are connected to the Internet now. Even though the city is physically separated from any other major population by hundreds of miles, it’s no longer possible for residents live in a bubble of local television and radio channels. The success of the Phantompalooza conventions was due to an understanding that Winnipeg’s connection to the film was special, not that it was just one of the great films. If nothing else, the film’s success in Winnipeg validates the feelings of Phantom fans elsewhere in the world, proving that, under the right circumstances, the film could have, and should have, been more popular. It’s just that maybe the right circumstances include a -40° winter.

This concludes our Movie Of The Week discussion of Phantom Of The Paradise. Don’t miss Monday’s Keynote on how De Palma uses a divided screen to establish a world where good and evil aren’t what they seem, and Tuesday’s staff forum on the film’s songs, lurid intensity, and strangely ageless themes. Next week, we’ll be ripping throats and taking names for a discussion of MacGruber. (Cue panther roar.)