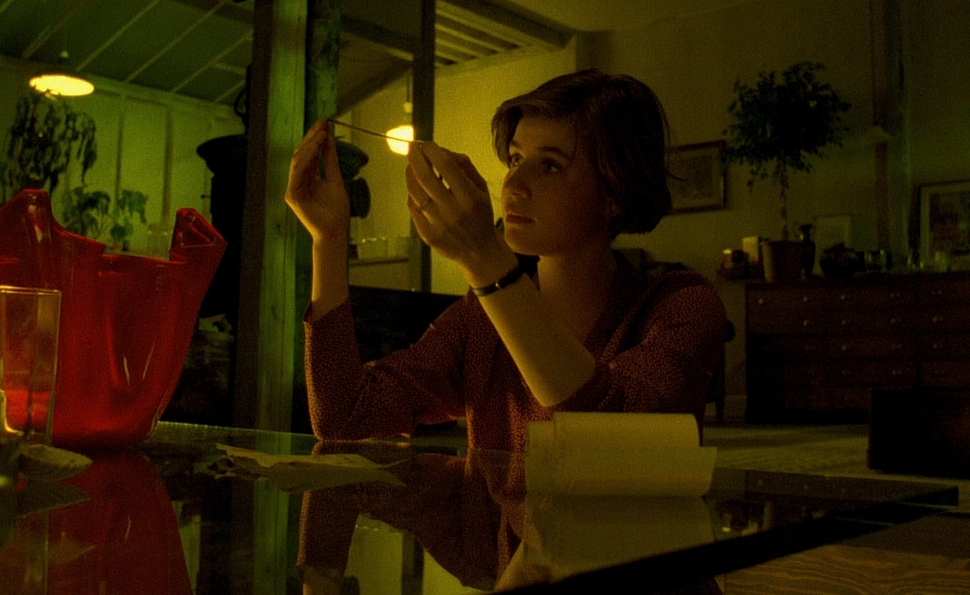 “I need an actor, glycerin tears, and a fake death. Everything has to be fake in order to look real onscreen.” —Krzysztof Kieslowski

Criterion’s Blu-ray edition of Krzysztof Kieslowski’s The Double Life Of Veronique adds three of the documentary shorts the Polish filmmaker made early in his career: 1970’s “Factory,” 1976’s “Hospital,” and 1980’s “Railway Station.” The extras are welcome, but a little unexpected, given the movie they’re attached to. The Double Life Of Veronique was made well after Kieslowski stopped making documentaries, and the film’s dizzying, extravagant style is so far removed from “Factory” that it’s like the work of two different filmmakers. Double Life is a purposeful illustration of why Kieslowski left documentaries behind in the first place: He was looking to explore aspects of the human experience that eluded him in non-fiction, in part because of his own squeamishness. In an interview, Kieslowski once said, “Lately it seems to me that I make films about people’s innermost thoughts and emotions, about what they don’t show to anyone.” He added, “It’s all more interesting in real life, but you should never film those things in real life.”

That interview is included on Criterion’s Double Life Of Veronique disc, as part of the 1991 documentary Kieslowski—Dialogue. That same documentary has footage of the making of Double Life, and it’s revealing to see the movie’s star, Irène Jacob, doing her best to give Kieslowski all the “innermost thoughts and emotions” he can handle, while lights, microphones, and cameras hover inches from her face. It’s an enlightening glimpse into the reality of a film set, and why Kieslowski might’ve felt some hesitation about using the heavy machinery of cinema to ensnare the organic.

Kieslowski held to his “actors only” position consistently throughout the latter part of his life. In interview after interview—many of which are included on the various Criterion editions of Kieslowski’s films, or cited on those discs by Kieslowski scholars—he said he became increasingly fascinated by small, human moments in his documentary films, but he felt it was wrong to record them. “When someone’s really dying,” he says in the documentary I’m So-So…, “aren’t they entitled to solitude?”

Lots of filmmakers besides Kieslowski have dealt with this question of intrusiveness vs. honesty in documentary filmmaking. Werner Herzog has gone to extremes to lend a feeling of authenticity to his narrative features, but his documentaries have frequently inverted that model, using rehearsed interviews and re-creations to draw viewers’ attention to a deeper truth. Two documentaries coming out later this year record private moments in different ways. Jesse Moss’ The Overnighters—about a North Dakota minister’s conflicts with his congregation and community over the area’s homelessness problem—includes conversations so raw that watching them feels like an invasion of privacy. Robert Greene’s Actress follows semi-retired middle-aged actress Brandy Burre as she tries to revive her career at the expense of her personal life, and the way Greene blends startlingly intimate moments with staged interludes raises questions about where performance ends for a professional faker.

For Kieslowski, though, the move away from documentary mirrored the gradually changing focus of his fiction. Kieslowski was one of a wave of Polish filmmakers who attended film school in the 1960s, at a time when that was one of the only ways for Poles to encounter Western culture. He made his first student films in 1966, and for roughly the next 20 years, he jumped back and forth between shorts and features, and fiction and non-fiction, taking advantage of rare periods of political openness to make movies that frankly documented contemporary life in Poland—movies that would then sit on the shelf until another set of government lackeys cycled through.

Kieslowski resisted overt political statements in his films, and discouraged strict political interpretations. The documentary featurette “Kieslowski: The Early Years” describes how he became cynical about the effectiveness of political protest after seeing how any changes brought about by citizen uprisings were quickly reversed by succeeding administrations. (In I’m So-So…, made toward the end of his life and after the fall of communism in Eastern Europe, Kieslowski shrugs that political statements still did little. “Anybody can say anything and it means nothing,” he says. “No one will punish you.”) Yet as Luc Lagier notes in his video essay “1968-1988: Kieslowski, Polish Filmmaker,” Kieslowski’s early films “favored recording reality to the detriment of any in-depth psychological portrayal,” which means they became political by default, just by being set against the backdrop of an ever-shifting bureaucracy. The films were informed by the constant fear that what seemed like a prudent choice one year could get a citizen in trouble the next.

Kieslowski’s early documentary shorts are austere in approach—shot in stark black and white, with a lot of close-ups—but they still have some visual interest. The way they’re cut, and what Kieslowski chooses to emphasize with his camera, establish their meaning, with little explanatory conversation. In 1966’s “The Office,” for example, Kieslowski evokes the experience of waiting in line at a government agency, and how it reduces people’s existence to stacks of paperwork, affixed with the proper stamps. “Factory” intercuts the hard labor of men on the factory floor with the relative comfort of a boardroom, where the bosses bemoan their lack of resources. “Hospital” follows doctors across a 24-hour shift of treating human bodies like meat machines, to be violently wrenched about and unkinked. In 1978’s “Seven Women Of Different Ages,” Kieslowski films various ballerinas in training, young and older, and watches them as they watch their instructors, offscreen. Kieslowski’s 1970s films lack the flashy camera moves and color schemes that marked his films in the 1980s and 1990s, but they vividly represent places and the people who dwell there.

“Talking Heads,” completed in 1980, was a pivotal film in Kieslowski’s career. One year earlier, he made the feature Camera Buff, starring Jerzy Stuhr as a white-collar office worker whose boss orders him to start filming his company’s official functions, and who then finds his aesthetic sensibilities putting him into conflict with his employer and his family. Camera Buff is both playful and poignant, even as it weighs Kieslowski’s own artistic dilemmas. Similarly, “Talking Heads” was Kieslowski’s way of making a documentary without violating his principles. Kieslowski interviewed people aged 1 to 100, and asked them to answer the questions, “Who are you?” and, “What do you want?” But he gave his subjects the questions in advance, so they could prepare. The result is a full, honest, and articulate accounting of the state of Poland and its people circa 1980. It’s also a film that expresses one of Kieslowski’s recurring ideas, which he often discussed in interviews: that for all people, regardless of age, nationality, faith, or gender, a toothache hurts the same.

Post-“Talking Heads,” Kieslowski’s films became more ambitious. His 1981 gem Blind Chance, which follows three separate but cosmically intertwined fates for a young man (Boguslaw Linda) running for a train—imagining him as a party leader, a reactionary, and a scholarly homebody—presages the double lives of The Double Life Of Veronique. In 1984’s No End—Kieslowski’s first collaboration with screenwriter Krzysztof Piesiewicz, who co-wrote the rest of his films—a lawyer’s widow (Grazyna Szapolowska) is haunted by his most politically problematic open case, and by the lawyer’s actual ghost. But it was 1988’s 10-part, Ten Commandments-themed TV miniseries The Decalogue—two excerpts from which were released as feature films outside Poland—that pushed Kieslowski to international prominence, setting up the rapid succession of masterpieces that ended his career.

For all the attention paid to The Double Life Of Veronique and the Three Colors trilogy (Blue, White, Red), their metaphysical qualities and fascination with interconnectedness was all set up by Kieslowski’s early films, which were less expressive, but every bit as probing. The later films even rhyme some with the earlier ones, in the same way Blue, White, and Red are linked. Blue shares No End’s preoccupation with grief; White returns to the stark, working-class Poland of 1976’s The Scar, and so on. Even when depicting the harsh realities of Polish life, Kieslowski was fascinated by his characters’ smallest moral choices, and their long-term impact. The not-insubstantial difference between Kieslowski’s early work and his last handful of films is how he told those stories, as he moved in closer and closer.

The less Kieslowski chose to stand aloof from his subjects, the more he found he had to construct and arrange in the frame, to get into his characters’ heads. In films like The Scar, or the 1967 short “Concert Of Requests,” Kieslowski mostly shoots the action as though he’s making one of his documentaries, becoming a fly on the wall or part of the crowd, capturing natural interactions. With The Double Life Of Veronique, Blue, and the like, Kieslowski introduced more subjective shots and point-of-view sequences, because toward the end of his life, Kieslowski became more and more curious about what other people were seeing.

This concludes our Movie Of The Week discussion of The Double Life Of Veronique. Don’t miss Tuesday’s Keynote on how the film’s warped imagery and constant reflections help tell the story, and yesterday’s Forum on the film’s divides between emotion and logic, reality and fantasy, mystery and specificity, and more. Join us next week as we dive into Brian De Palma’s camp midnight-movie spin on Phantom Of The Opera, 1974’s weird, wild rock opera Phantom Of The Paradise.