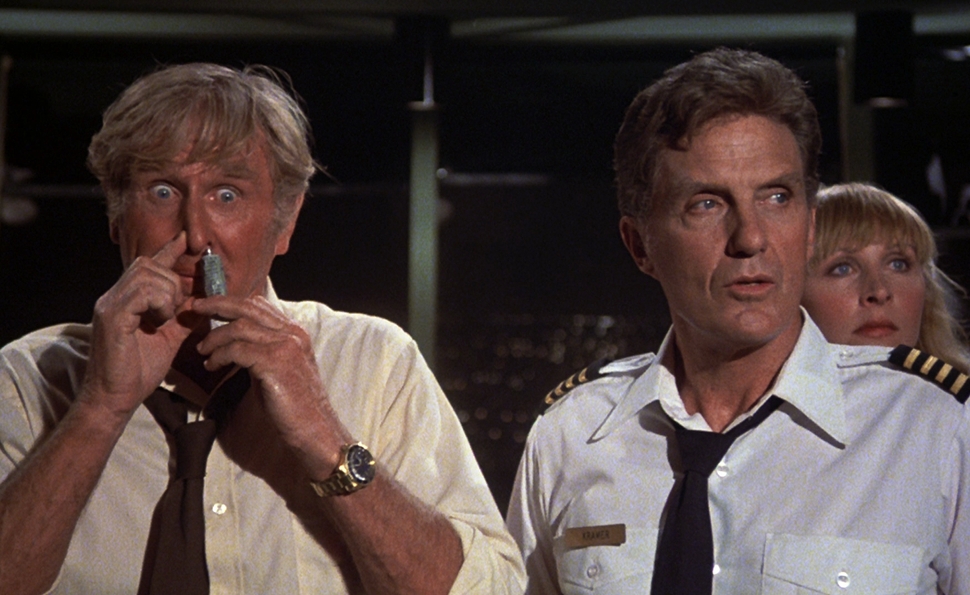 Near the end of Wayne’s World 2, Wayne Campbell (Mike Myers) jumps into a convertible and races off to intercept his girlfriend, Cassandra (Tia Carrere), before she can marry another man (Christopher Walken). Wayne drives through a tunnel. He stops at a gas station and frantically asks for directions to the church where the wedding is taking place. He runs out of gas and has to jog the remaining distance. He arrives too late and can only bang repeatedly on a glass wall high above the ceremony, shouting Cassandra’s name. Close-ups of antagonists’ scowling faces precede Cassandra’s sudden decision to run off with Wayne. They fight their way out of the church, using Wayne’s guitar as an impromptu means of blocking the door, then flag down and board a city bus that’s conveniently passing by at that moment.

All this is a loving parody of The Graduate’s final sequence, executed nearly shot-for-shot in many of the same locations where the original was filmed, including the United Methodist Church in La Verne, California. Watching Wayne’s World 2 during its theatrical release in 1993, I sat there in awe as the spoof went on and on and on, re-creating specific actions and line deliveries with the fanaticism of a “Weird Al” Yankovic video. It just seemed so wonderfully quixotic. Did Myers, who co-wrote the screenplay in addition to playing the title role, imagine that the primary Wayne’s World fan base—teenage guys, mostly—had seen The Graduate and would appreciate an extended homage? People were laughing all around me, but I wondered how many of them knew exactly what they were laughing at, since the only reference that might register for non-cinephiles was the use of Simon & Garfunkel’s “Mrs. Robinson” on the soundtrack.

Revisiting Airplane! this week convinced me that it doesn’t much matter. Until recently, I was unaware that Zucker, Abrahams, and Zucker lifted the movie’s entire plot, and much of its dialogue, from a forgotten 1957 drama called Zero Hour!, starring Dana Andrews, Linda Darnell, and Sterling Hayden. The key word in that last sentence is “forgotten.” ZAZ didn’t imagine audiences would remember Zero Hour! and enjoy Airplane! as a direct parody; they simply mined the earlier film for jokes, trusting that the absurdity would work just fine in a vacuum. For example, the running gag in which the tower supervisor (Lloyd Bridges) ruefully remarks that he picked the wrong week to quit smoking (and drinking, and amphetamines, and sniffing glue) is derived from a single offhand line in Zero Hour! It isn’t necessary to know that in order to find the bit funny, though. In fact, parodies frequently become even more hilarious many years later, when the source material has faded from collective memory. Mockery dates, but non sequiturs are timeless.

One of my earliest and fondest encounters with this phenomenon took place in the early Marx brothers film Animal Crackers, adapted from their hit stage production. In the middle of a conversation with two women, Groucho suddenly steps forward and addresses the camera directly—not in his usual waggish, conspiratorial way, but with a sort of pseudo-pompous earnestness. “Strange how the wind blows tonight,” he intones in a vaguely Irish accent. “It has a thin, reedy voice, reminds me of poor old Martin.”

For modern audiences, this plays like typical Groucho goofiness, but contemporary viewers would have recognized it as a parody of Eugene O’Neill’s play Strange Interlude, which had premièred just two years earlier, and which employs frequent tortured soliloquies. Groucho even says, “Pardon me while I have a strange interlude,” to make sure people get it; that phrase no longer means anything to most people, though, so the whole thing just seems randomly zany. Thing is, it was funnier to me before I discovered its provenance, precisely because it seemed so random. I can appreciate it more now, but I laughed harder when it just came out of nowhere and assaulted me.

Airplane! is full of moments like this—jokes that meant something very specific in 1980, but play quite differently to anyone who wasn’t around back then. The movie even has a strange interlude of its own: When a stewardess offers more coffee to a married couple seated in coach, the woman says, “I will, but Jim won’t,” then gets flummoxed when he contradicts her and asks for a second cup. “Jim never has a second cup of coffee at home,” she thinks in voiceover, as the camera pushes in on her puzzled face. I’m old enough to remember the then-recent Yuban coffee commercial being spoofed here, but those who aren’t might not even realize the joke has an unknown (to them) reference—like Groucho’s soliloquy, it’s bizarre enough out of context to work as dada comedy. That’s arguably funnier than the original, rather lackluster gag, which was predicated entirely on recognition. (Though the followup bit, in which the same woman muses that her airsick husband never vomits at home, does put a little ZAZ-style spin on it.)

Delightfully random: One of the pilots in Airplane! is played by basketball superstar Kareem Abdul-Jabbar, allowing for some meta-humor when he’s recognized by a little kid.

Except no it isn’t: ZAZ cast Abdul-Jabbar because the pilot in Zero Hour! was played by Elroy “Crazylegs” Hirsch, a star running back for the Los Angeles Rams during the 1950s.

Delightfully random: A stewardess in Airplane! borrows a guitar—from a nun!—and sings a cheery folk song to a sick little girl, accidentally unhooking the kid’s IV tube in the process.

Except no it isn’t: That comes not from Zero Hour!, but from Airport 1975, the dismal sequel to Airport. Pop star Helen Reddy plays a singing nun in the film, performing for Exorcist star Linda Blair as a girl in need of an organ transplant. Furthermore, Airplane!’s nun is played by pop star Maureen McGovern, who performed songs for the soundtracks of disaster films like The Poseidon Adventure and The Towering Inferno.

Delightfully random: Airplane’s opening sequence features a heated argument between the male and female voices that provide instructions regarding the red zone and the white zone at LAX. It’s implied that the two are romantically involved, as she complains that he wants her to get an abortion.

Except no it isn’t: Those two voices are performed by the man and woman who actually recorded the red-zone and white-zone announcements for LAX. They were married in real life. Their lines regarding the abortion were lifted from Arthur Hailey’s novel Airport.

Knowing the specific inspiration for these gags doesn’t make them funnier, just as learning how an amazing special-effects sequence was pulled off doesn’t make it more exciting. In cases like this, ignorance is often bliss. SCTV was my favorite comedy show growing up, but I’m glad I’m not familiar with the Toronto-specific references that can reportedly be found in every single episode. The Crazy Hy’s sketches are uproarious in large part because it’s hard to even imagine how they were conceived; turns out they’re poking fun at a series of local ads from the 1970s, and seeing one of those ads could only diminish the bust-a-gut insanity in my eyes.

To bring this thesis full circle, let me shamefacedly confess that I failed to recognize the blatant Airplane! parody that Seth MacFarlane included in Ted. (In my defense, at the time I hadn’t seen Airplane! in something like 20 years.)

The joke as intended is very much in the vein of MacFarlane’s Family Guy cutaways: a direct pop-culture parody embedded as a quick flashback in the middle of a scene. Mark Wahlberg is dressed exactly like Robert Hays in the corresponding Airplane! flashback; he and Mila Kunis (in the Julie Hagerty role) do the same dorky dance moves; even the cartoon noises that accompany hats and coats being tossed aside get faithfully replicated. Had I “gotten it,” this bit would probably have annoyed me, just as Family Guy mostly annoys me. Instead, I didn’t get it, which made it hilarious, because whaaaat? Why is Wahlberg suddenly wearing a 1970s disco outfit underneath an Air Force uniform? Whose warped mind came up with, “Let’s have Mila grab Mark by the legs and swing his entire body around”? Why does this apparent Saturday Night Fever parody have nothing to do with Saturday Night Fever apart from the use of “Stayin’ Alive”? Devoid of context, it became much funnier than it “actually” is.

At the risk of simplifying Monty Python (and annoying Eric Idle), let me suggest that there are two basic modes of comedy, processed by different parts of the brain: an orderly, logical John Cleese/Graham Chapman mode, and an intuitive, erratic Terry Jones/Michael Palin mode. One isn’t more valuable than the other, but the natural shift that sometimes occurs with the passage of time, transforming a left-brain joke into a right-brain joke, is fascinating. Is it possible that a contemporary comedy as dismal as Date Movie or Scary Movie 5 might seem funnier to future generations, who won’t have a clue which long-forgotten films are being spoofed? (Let’s hope people aren’t still watching Saw II in 50 years.) Maybe not, but I think I’ll wait to watch them on my deathbed anyway, just in case sophomoric turns into surreal.

Our Movie Of The Week discussion of Airplane! ends here. Don’t miss Tuesday’s Keynote on the film’s straight-faced lunacy and Wednesday’s staff forum on what ZAZ get right that so many of their imitators get wrong. Next week, we kick off our decade-by-decade Blockbuster Month with the 1970s gem that started it all: Jaws.