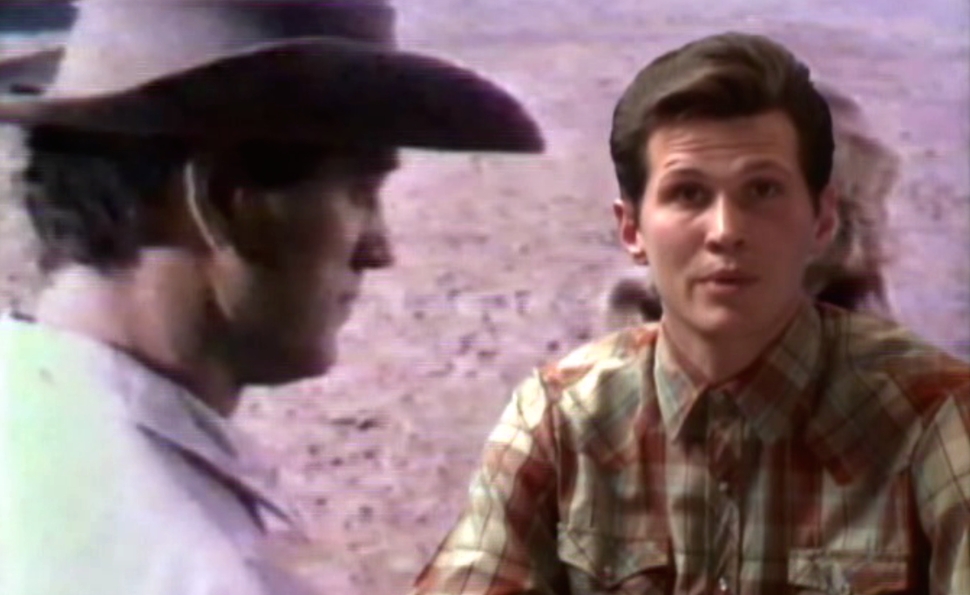 In the early 1990s, America’s more adventurous arthouses programmed the unusual 63-minute feature Rock Hudson’s Home Movies, which is now included as a bonus feature on the new Criterion edition of All That Heaven Allows. The film’s director, Mark Rappaport, had been making offbeat features since the 1970s, but this was a departure. Part documentary, part biopic, part filmed essay, Home Movies features actor Eric Farr playing Rock Hudson and directly addressing viewers. The gimmick is simple: As Hudson, Farr hosts a series of clips taken from his own films, a reel revealing “the gay implications in every movie.” “I snipped these scenes out and would run them over and over again for my friends in the screening room at my house,” he claims, noting that while the public was none the wiser about his sexuality, they “rolled on the floor with laughter.”

Rappaport premièred the film in 1992, seven years after Hudson became the first high-profile celebrity to die of an AIDS-related illness. Hudson’s death also made a public matter of his sexual orientation, which he’d kept under wraps throughout his career. Staying in the closet wasn’t a solo effort. Hudson had the usual assistance of the Hollywood publicity machine in keeping his secret, which helped facilitate an ill-fated marriage between “Hollywood’s most handsome bachelor” and his agent’s secretary. But in some respects, it wasn’t that hard. Onscreen, Hudson embodied a kind of easygoing, rugged masculinity, far removed from the effete gay-coded sissies who showed up in movies. Per Hollywood, that’s how gay men looked and acted, not like Rock Hudson.

Yet as the Rock Hudson of Rock Hudson’s Home Movies argues, his sexuality was always up there on the screen for anyone who cared to look for it. Rappaport builds this argument with clips from the actor’s career: Hudson’s characters are asked why they aren’t married, only to demur. They develop relationships with older mentors—Otto Kruger in Magnificent Obsession, Burl Ives in The Spiral Road—that look a lot like, in the film’s term, “pedagogical eros.” Opposite Doris Day in Pillow Talk, a farcical game of double identity finds him playing both an unrepentant cad and a “sensitive” fellow who’s attractive to Day’s character in part because she seeks to rescue him from his feminine ways. (As Hudson puts it here, it’s a difference between “Dr. Macho Jekyll and Mr. Homo Hyde.”) In these and other comedies co-starring Day, Hudson is also paired with Tony Randall, whose characters have a way of stumbling across Hudson’s in varying states of undress. Then there are the many charged scenes opposite other men in which challenges play like flirtations, and fistfights like consummations.

It’s a persuasive argument, though not an airtight one. Some of it’s built from recurrences too significant to ignore, some from moments taken wildly out of context. But scholarly precision is hardly the point. The opening credits complete the film’s title by adding an apostrophe-S and the words “Home Movies,” then Rappaport and Farr’s name in a cheap-looking font next to the more elegant lettering of another film’s credits. It’s a punkish gesture, one that literally overwrites the official record as a way of introducing a film intent on doing the same. The slight Farr neither looks nor sounds much like Hudson, which just adds another layer of illusion to a presentation interested in illusions of all sorts.

In an otherwise-positive 1993 review for The New York Times, Janet Maslin complains about the film being “smirky,” but any smirk here is weaponized. Rappaport finds humor in the unearthed subtext, and Farr’s Hudson rarely gets emotional, delivering his observations with the flat affect of a man simply stating the facts. Yet he’s also explicitly speaking from beyond the grave, and Hudson’s then-recent death informs the film from start to finish. Two films for Douglas Sirk—including All That Heaven Allows—found him acting opposite Jane Wyman, once the wife of Ronald Reagan, whose slow response to the AIDS crisis had tragic consequences. “His AIDS policy made me wonder why I had been a Republican all those years,” Hudson notes. “But I was glad that my death, if nothing else, gave him an excuse to talk about AIDS publicly for the first time, even if it was because I was famous.”

Time has blunted some of the impact of Rock Hudson’s Home Movies. Its form anticipates everything from contemporary video essays to supercuts. Its sensibility has crept into a mainstream culture much more attuned to subtext and gay themes. (Albeit one that hasn’t always gotten past the point of treating even the hint of homosexuality as snicker-worthy. For evidence, google “C-3PO gay.”) But in part, that’s thanks to Rock Hudson’s Home Movies and other efforts to use camp, irony, and disarming humor to tear down barriers and raise awareness, efforts given an added urgency by AIDS. Here, Hudson refers to his film career existing in a time “before people knew that ‘gay’ also meant their sons, their brothers, their husbands.” A time, in other words, before AIDS, and before Hudson became its famous public face.

Though Rappaport—who remains embroiled in an appalling battle to reclaim his films from the scholar he trusted them to—deserves more than to show up as a bonus feature on another film’s Blu-ray, Rock Hudson’s Home Movies fits nicely next to All That Heaven Allows, a film in tasteful, emphatic rebellion against the limitations social mores place on our happiness, and our ability to be ourselves. For the characters in Sirk’s film, that means learning to not live in fear of what others think. In life, Hudson never enjoyed that experience. In death, Rappaport gave him a second chance.

Our Movie Of The Week discussion of All That Heaven Allows ends here. Don’t miss Tuesday’s Keynote on the many ways Douglas Sirk uses images and objects to make a point, and yesterday’s staff forum on what the movie has to say about the conformity and skewed values of the 1950s. And join us next week as we re-evaluate the purported “worst movie of all time,” Plan 9 From Outer Space.