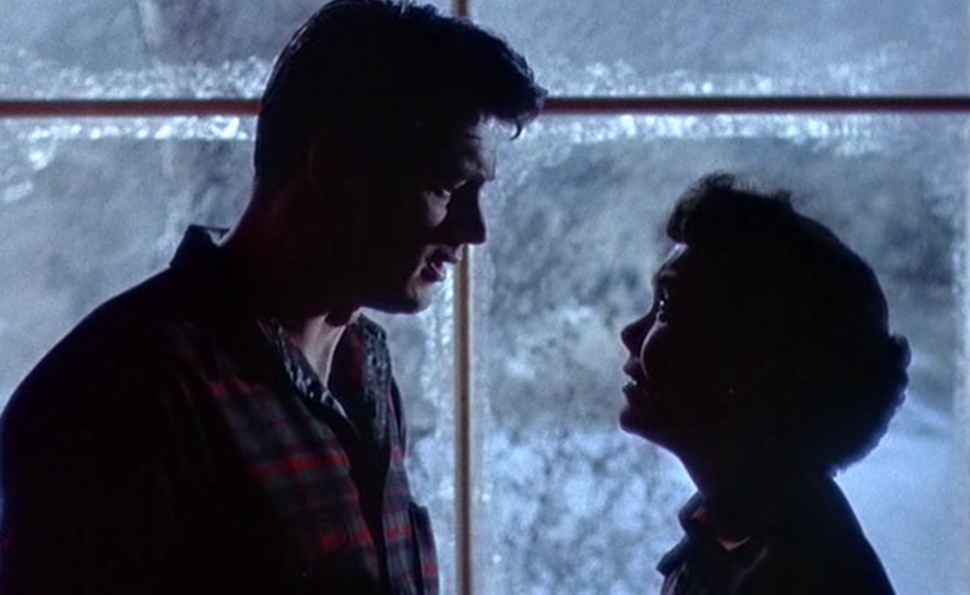 All That Heaven Allows isn’t subtle about its message, and most of the time, it isn’t particularly subtle about the delivery, either. Douglas Sirk’s classic 1955 melodrama—his masterpiece, in the eyes of many critics and fans—tells a simple story of domestic injustice, with Jane Wyman playing middle-aged widow Cary Scott, who scandalizes her country-club neighbors and her college-aged kids when she starts dating her gardener, Ron Kirby (Rock Hudson). Sirk and screenwriter Peg Fenwick (working from a story by Edna and Harry Lee) paint Cary’s family and social circle as closed-minded and mean-spirited, and show Ron as a spiritual man of accomplishment, trying to build a fulfilling life for himself away from the upscale small town where he plies his trade. From the bold colors and lighting to the cruel plot twists, All That Heaven Allows is an undisguised critique of how rich people’s materialism and conformity choke the happiness out of ordinary working folks.

Yet Sirk’s attention to detail makes All That Heaven Allows a more beautiful and powerful film than the above description implies. Sirk doesn’t just hit the main point of the movie in a few big scenes; he liberally sprinkles in signifiers of who these characters are and how they live. All That Heaven Allows is filled with telling gestures, and objects that say a lot about their owners. The oppressive trappings of success are omnipresent in this movie, contrasted with the more simple way Ron and his friends live. Here, Sirk is subtler—not about the meaning of all these tiny details, but in the way he weaves them into the film’s overall visual design. One or two obviously symbolic images might come across as glaring, even clumsy, but Sirk fits nearly every element in the frame into All That Heaven Allows’ theme, creating patterns and echoes that give the whole movie a strong, harmonious hum.

Here are 10 examples in All That Heaven Allows of one image, object, or gesture playing off another. 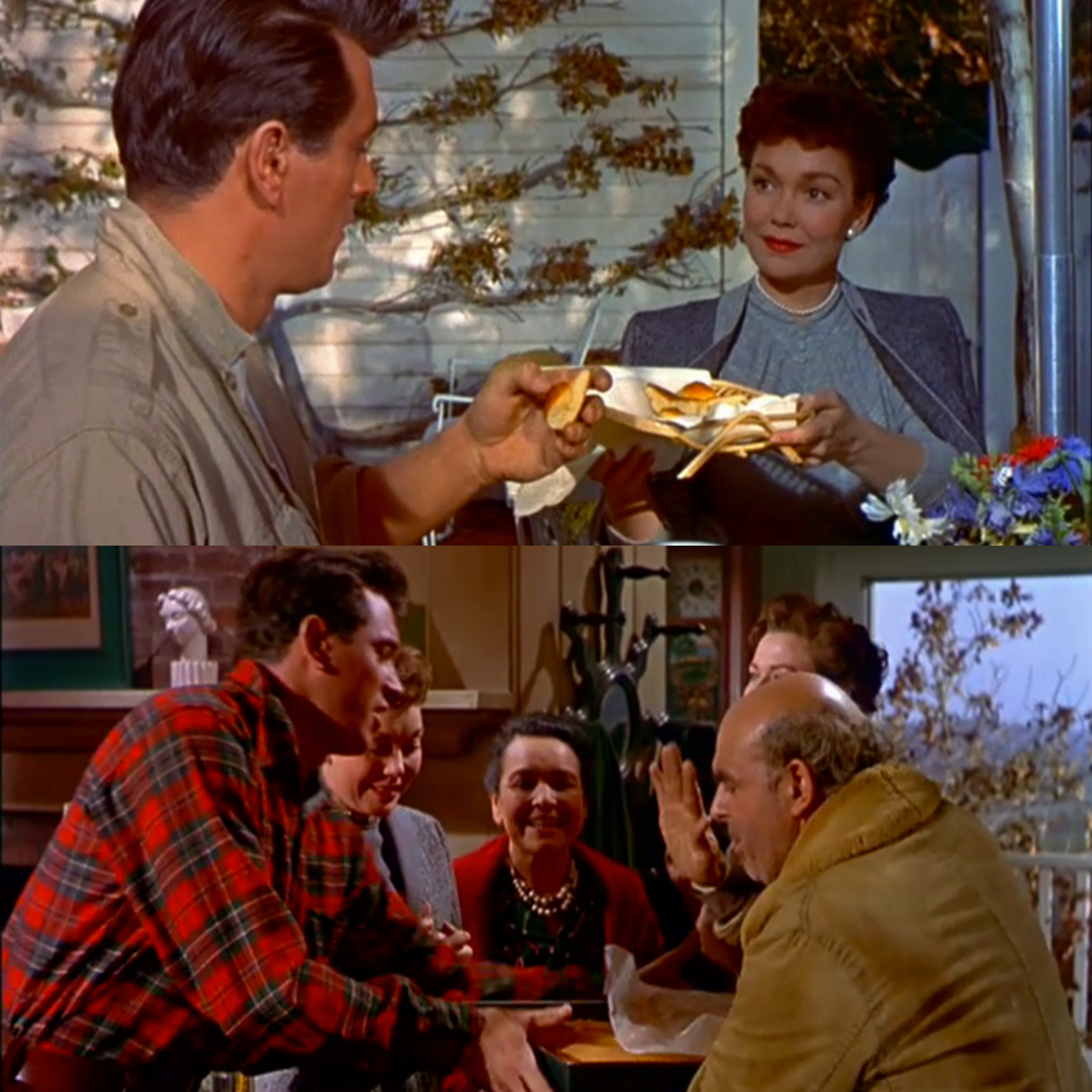 In the opening scene of All That Heaven Allows, Cary offers Ron some coffee and rolls, while she asks him questions about his background and future plans, vaguely ashamed that he’s been coming to her house for four years without her even knowing his name. The rolls Cary passes to Ron are tiny, served on a nice wooden tray with a cloth napkin. It’s an awfully elaborate presentation for a meal Cary was originally planning to eat with her best friend Sara (Agnes Moorehead) on the patio. Later, after Ron and Cary get to know each other better, he invites her to have dinner with his friends Mick and Alida Anderson (Charles Drake and Virginia Grey), and the meal turns out to be a potluck party, with contributions from all of the Andersons’ guests. One family—immigrants, with thick accents—brings a pan of cornbread, and the contrast between their bread and Cary’s is pronounced. The cornbread is uncut, in a plain sheet-pan, covered loosely with wax paper that starts flying off as soon as Ron starts to take it out of their hands. This food has been lovingly prepared, and is meant to be eaten in huge helpings, un-daintily. 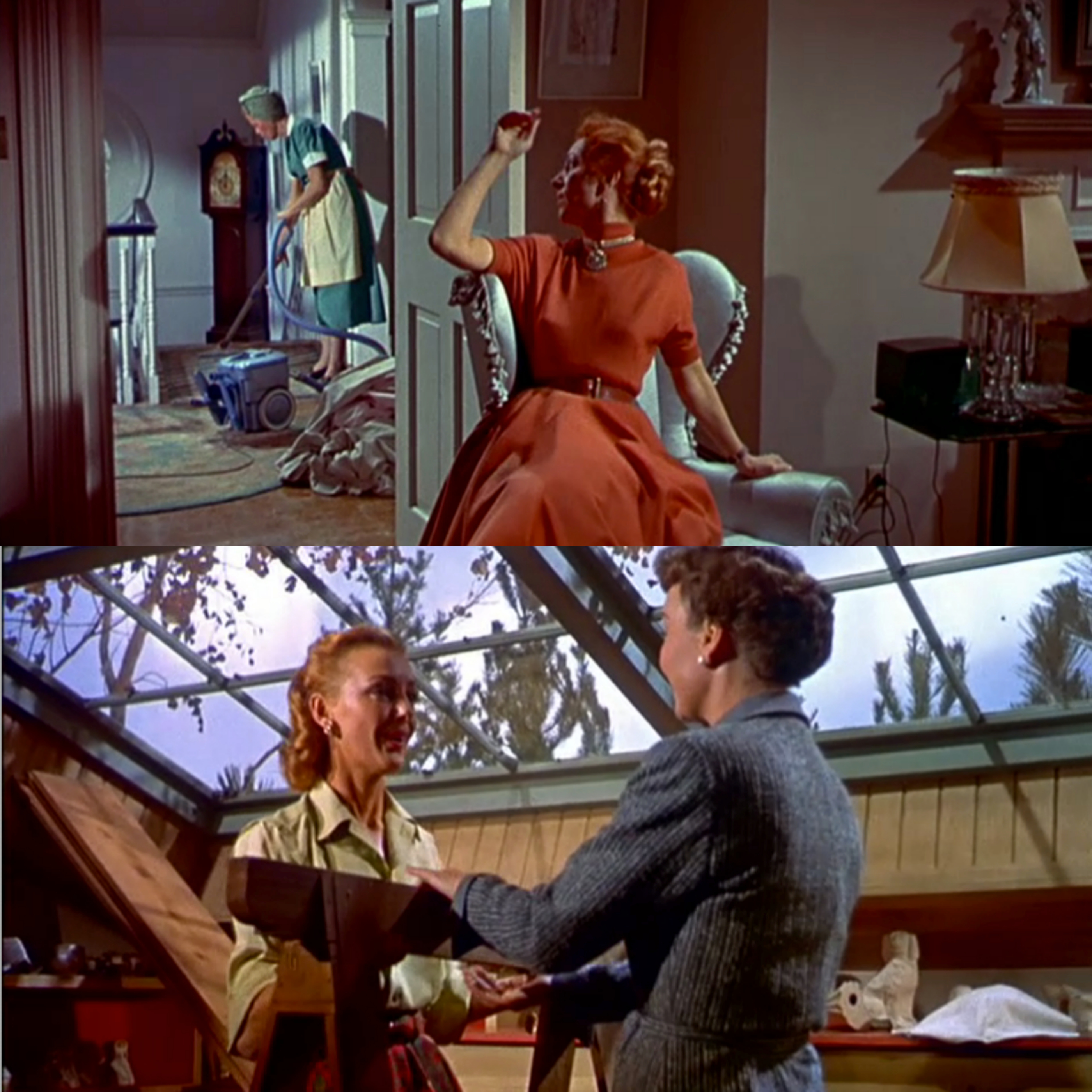 A vacuum and a sawhorse

It’s never established who exactly prepared the lunch Cary serves to Ron in the first scene, but All That Heaven Allows does offer one brief glimpse of one of Cary’s servants. While Cary is talking about her romantic and family troubles with Sara, in the background, a maid cleans the house with a state-of-the-art vacuum cleaner. Sara glances irritably back at the maid, and quickly closes the door, choosing to ignore one of the people who’s working behind the scenes to set the stage for the movie’s various dramas. (Sara has a similar reaction when she meets Ron for the first time, giving him a cursory “hello” and then forgetting he exists, which makes it all the more awkward when Cary explains she’s been dating him.) Once again, the hands-off approach to household chores in the Scott household is markedly different from life at the Andersons’, where Alida enlists Cary’s help to wrangle sawhorses and planks into place to assemble a makeshift table for the party. At the Andersons’, everyone pitches in. 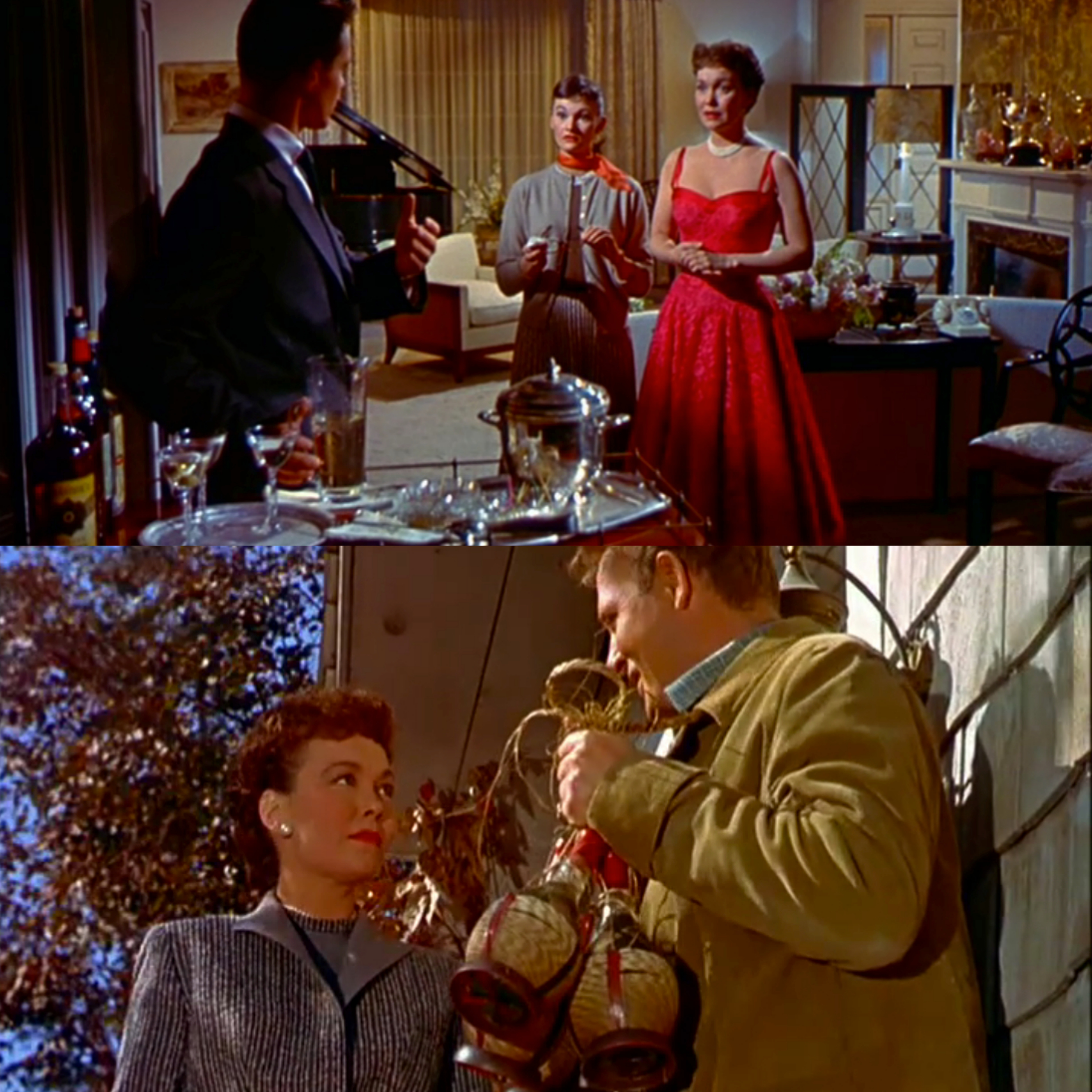 One of the ways Cary’s son Ned (William Reynolds) asserts himself as the new man of the house after his father’s death is by taking over the job of mixing cocktails, commanding the fancy bar cart to prepare his famous martini, “The Scott Special”—though he makes a point of complaining that his mother’s brand of gin isn’t as good as the kind he usually uses. Meanwhile, back at the Andersons’ party, Mick and Ron head down to the cellar and bring up straw-covered bottles of chianti, attached to each other by ropes. There’s no silver or crystal involved in serving the wine at the Andersons’ place. The only utensil they need is Ron’s teeth, to yank out the corks. 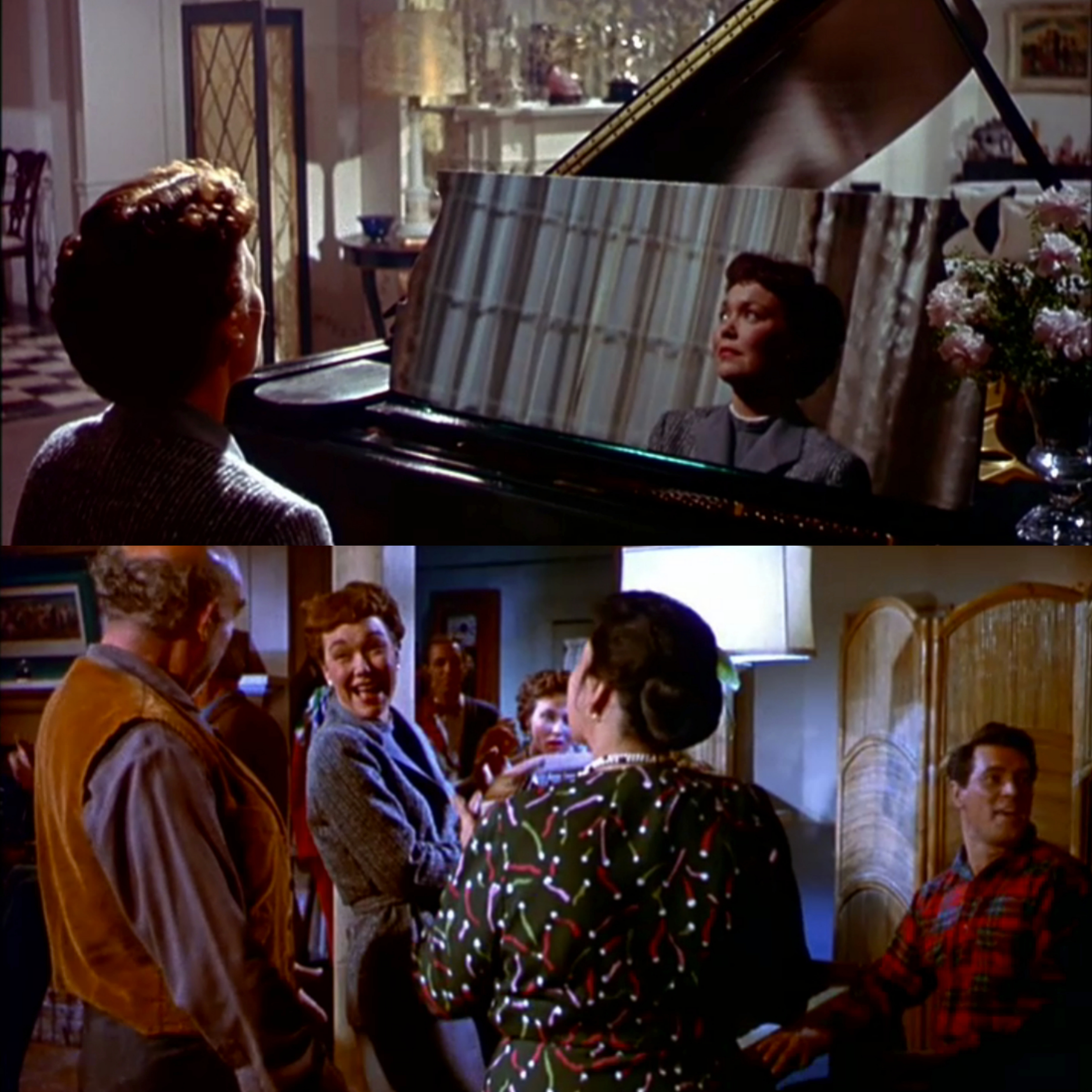 Like everything else in the Scott house, Cary’s piano looks elegant: a baby grand, with a vase of fresh flowers sitting next to a mirrored music stand. But all Cary can see reflected in her piano is herself, isolated and alone. That’s contrasted again with the piano at the Andersons, where Ron plays a funny novelty song, surrounded by happy, singing people. 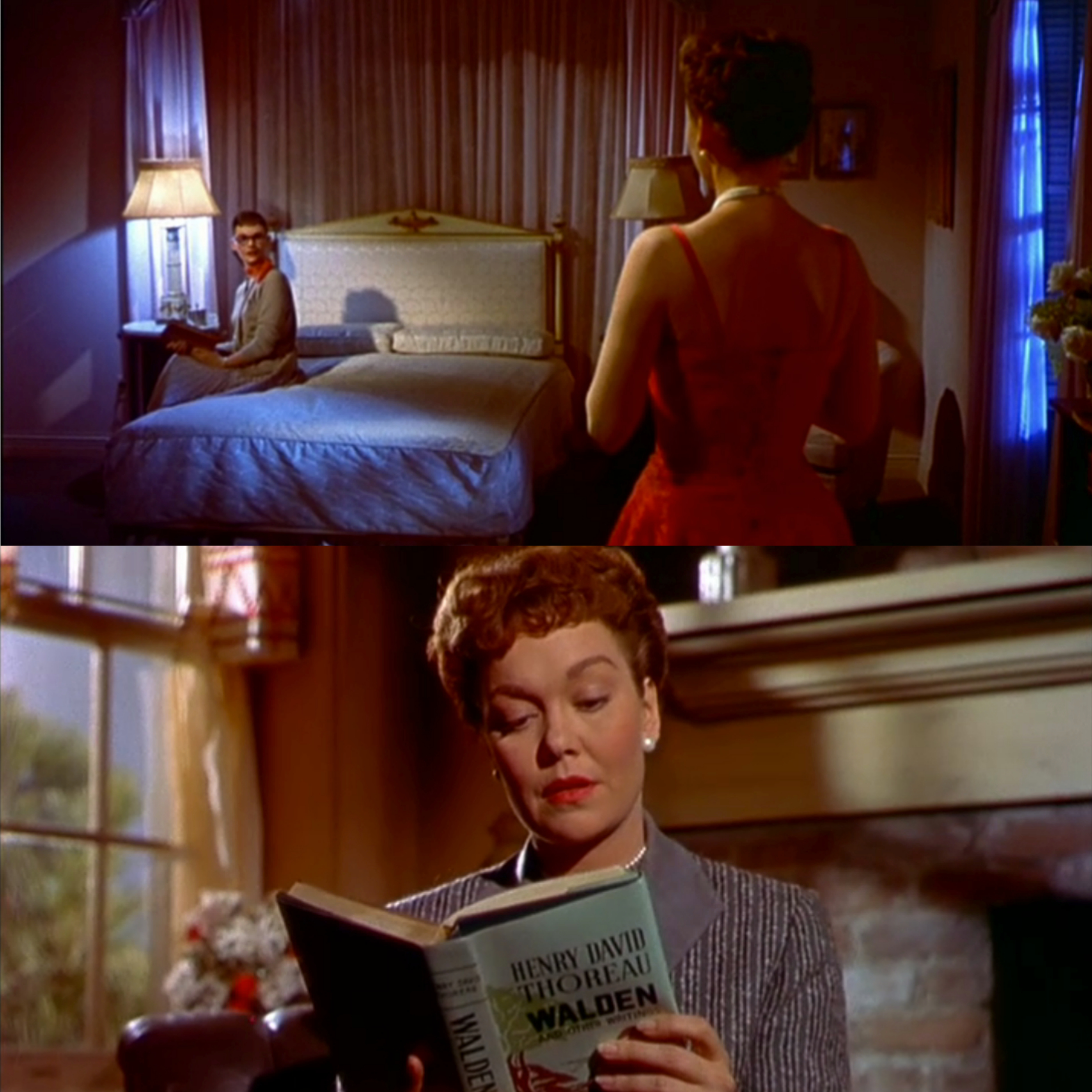 Cary’s daughter Kay (Gloria Talbott) drops by the house early in All That Heaven Allows and plops down onto her mother’s bed—one of Kay’s favorite perches in the film—to deliver a long lecture to her mother about the natural diminishment of the sex drive among older couples. (“When we reach a certain age, sex becomes incongruous.”) Cary misses the whole speech, because she’s in an adjacent room, changing into the sexy red dress she’s planning to wear on her date with the bland, “remarkably civilized” Harvey (Conrad Nagel)—a man who thinks Ned’s martinis are too strong. But Cary does make it back in time to see Kay pick up what is presumably a fairly spicy romance novel off the nightstand and gasp, “Are you reading this?” Later, at the Andersons, it’s Cary’s turn to be taken aback when she sees Mick has been reading Henry David Thoreau’s Walden, a book that argues against everything the Scotts have valued for generations. 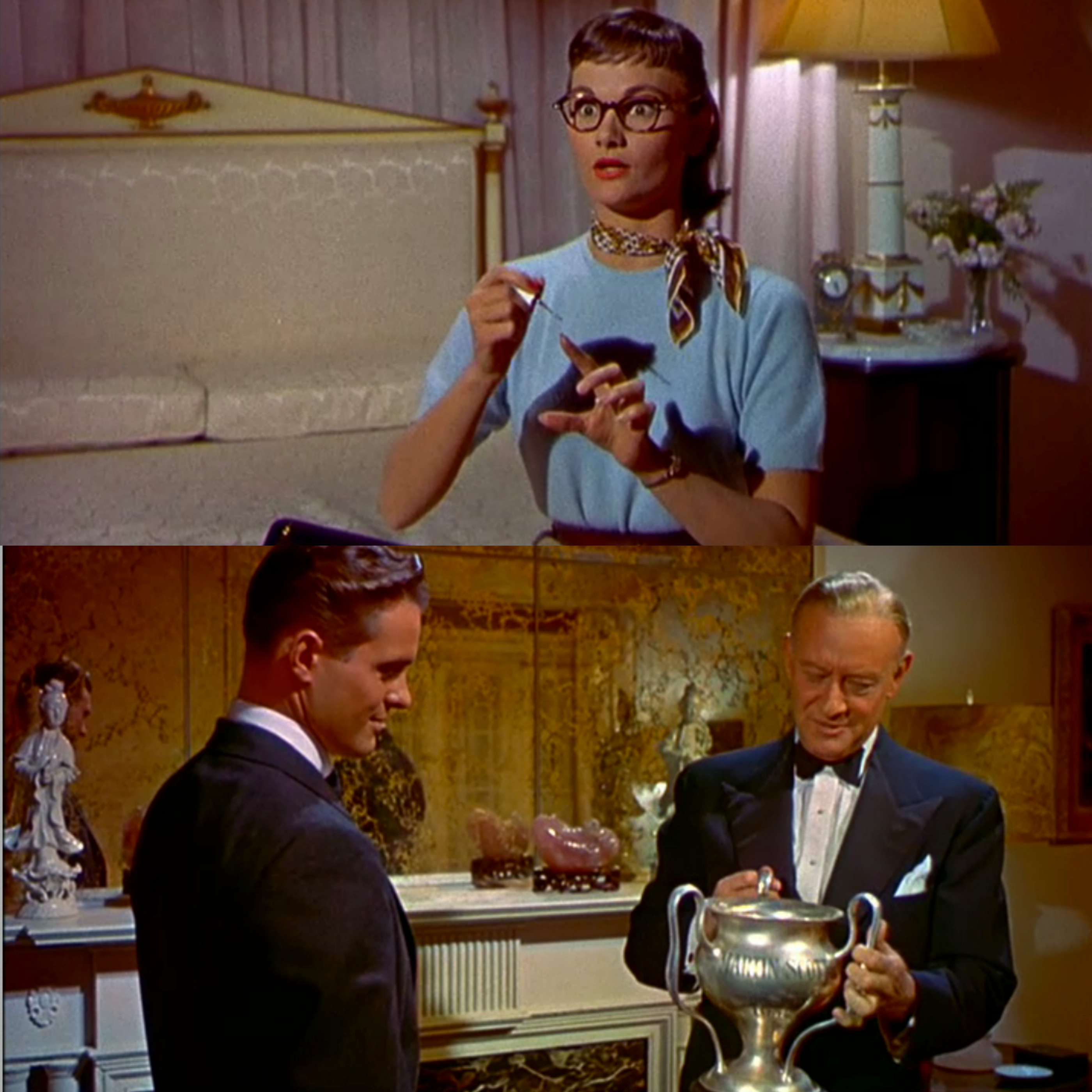 A manicure set and a trophy

Kay is back on her mom’s bed later in the film, borrowing Cary’s nail polish, because Kay apparently assumes her mother doesn’t need to pretty herself up, or use her own bed. Kay’s usurpation of her mother’s place is similar to Ned’s takeover of the the bar cart. Both children believe they’re ready to take over for their parents, and both view Cary much the way they view their late father: as a memory, not as a person. That’s evident also in the way Ned regards the club trophy his dad won, which sits on the fireplace hearth. Ned looks on with quiet satisfaction when the non-threatening Harvey holds the trophy, accepting Harvey as a substitute for his dad: another man who knows how to fit in with the well-dressed savages at the club. Later in the film, when Cary removes the trophy from the mantle altogether, Ned is enraged, because while he can imagine his mother moving on to another “trophy guy,” he can’t picture her dispensing with trophies altogether. 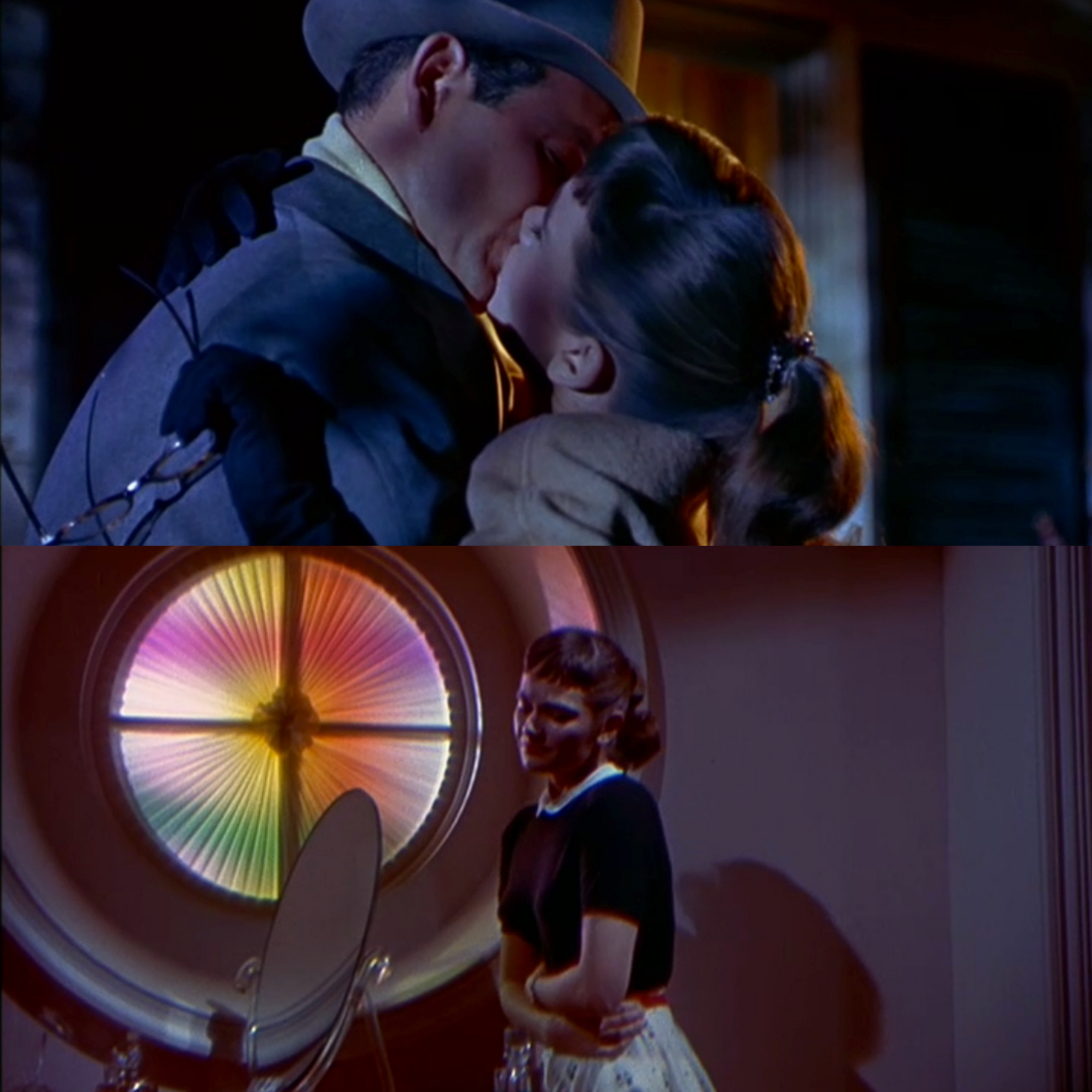 Kay has a fantastic fidget: Throughout the movie, she’s constantly removing her eyeglasses, then putting them back on. The glasses are part of the the mask she wears as a pseudo-intellectual, which she removes to go back to being what she imagines a marriageable young woman to be. Kay has her glasses on when she tells her athlete boyfriend, “You really didn’t want to be football captain, you wanted love,” and then she takes them back off shortly after she adds, “Of course, you do have the build for it.” (The glasses stay off when he kisses her.) Kay’s chameleon-like quality is matched by the rainbow-colored window in her bedroom, where she weeps on her mother’s shoulder about how the affair with Ron has ruined their family’s reputation—and has cost Kay her football star. Kay wears all her colors at once while crying to her mother; in that scene, Kay’s glasses are off and her vanity mirror is turned away from her, so she can’t see how selfish her behavior is. 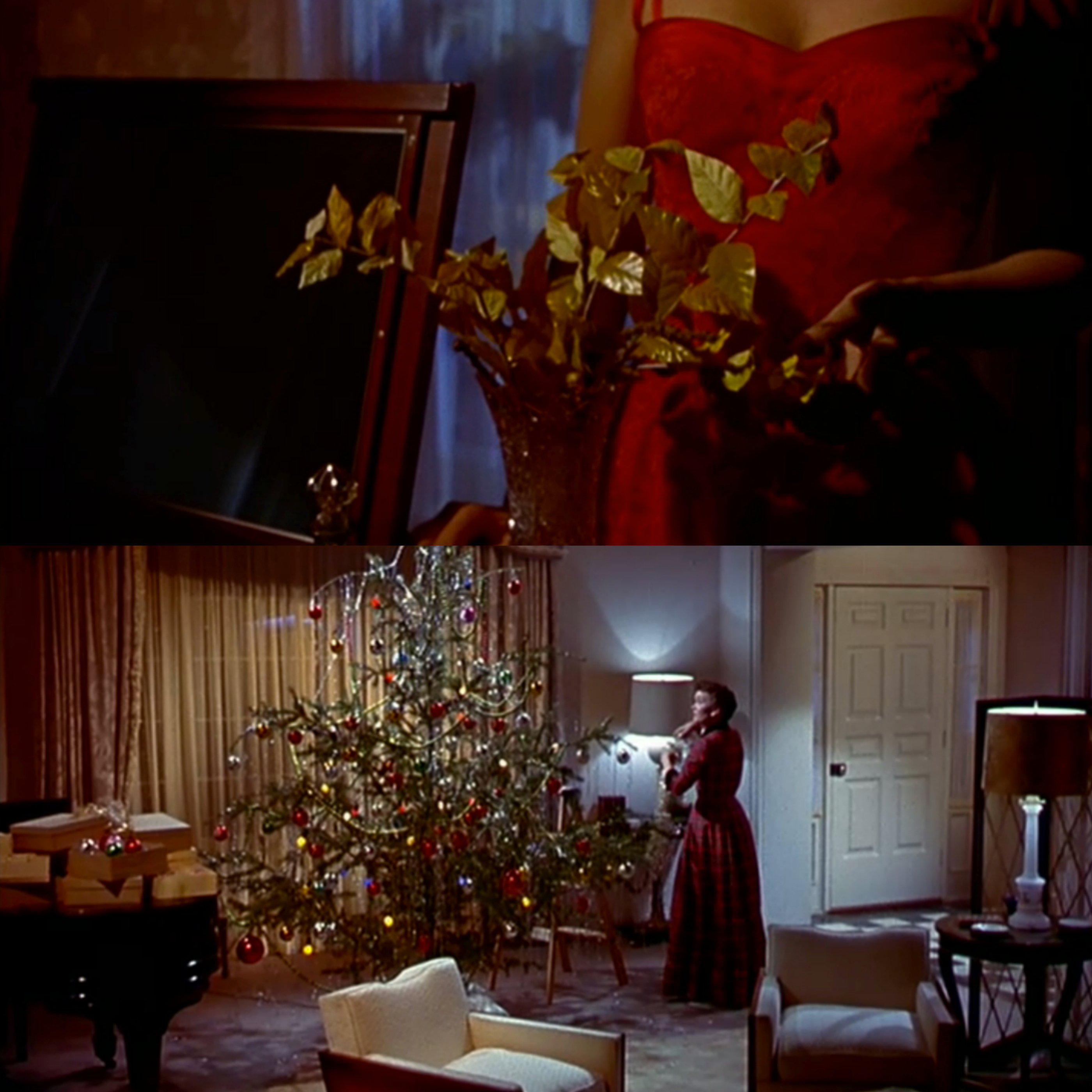 Early in the film, Ron gives Cary a cutting from a golden-leaved tree, which she keeps in a vase in her bedroom, and looks at longingly after another unsatisfying date with Harvey. When Cary starts seeing Ron regularly, he shares his knowledge about plants and trees, enhancing her appreciation for nature. Even after she breaks off their romance, Cary starts to apply what she’s learned from Ron when she picks out a Christmas tree. But then she sees Ron with another woman, and misinterpreting the situation, she angrily buys a scrawnier, inferior tree—once again denying herself the happiness she deserves. 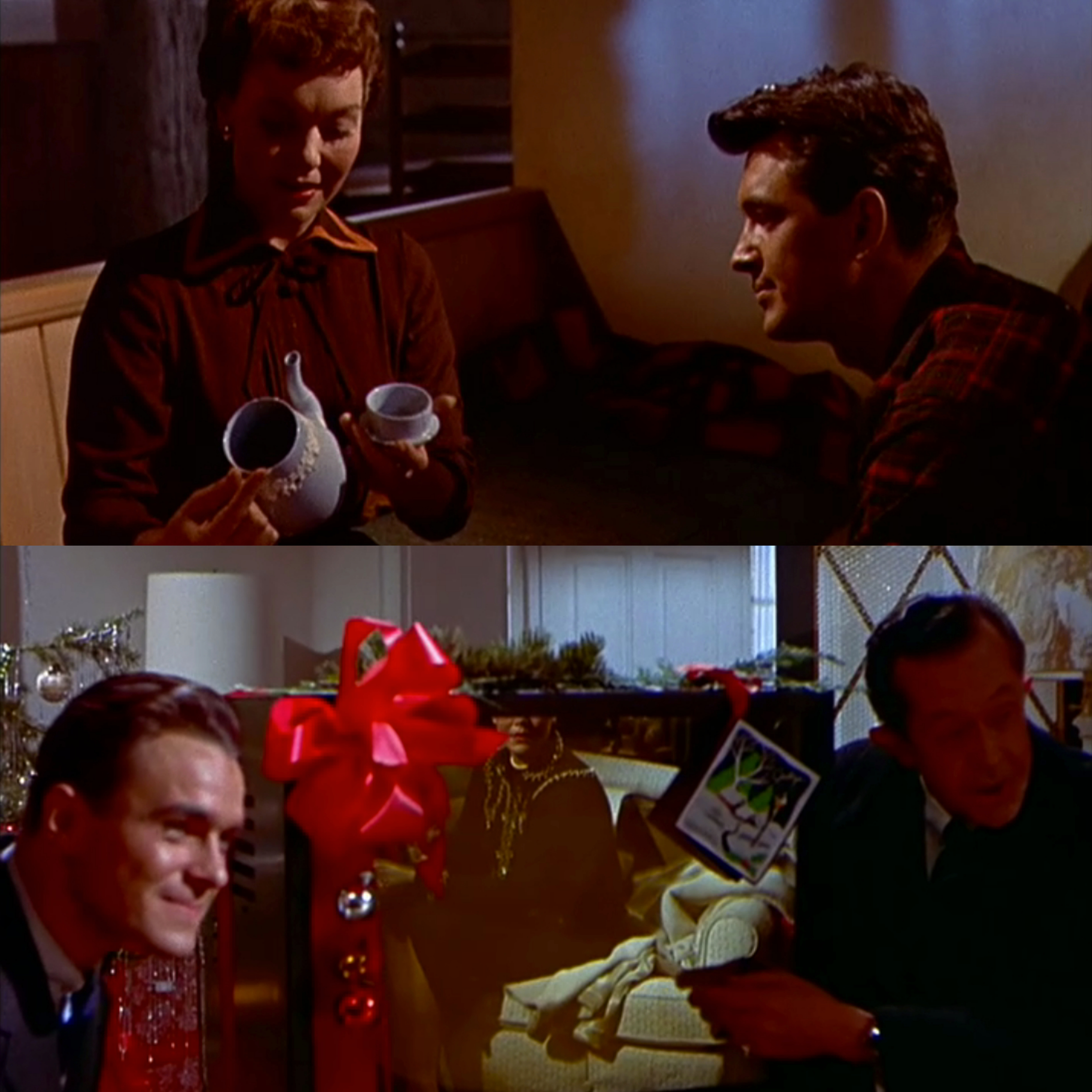 The first time Cary visits Ron’s place, she walks around inside the old mill he’s thinking about tearing down, and urges him to fix it up so he can live there with some future wife. She’s especially delighted to find a broken Wedgwood teapot, and wonders if he can find the rest of the pieces to restore it. On the night Ron asks Cary to marry him, he shows her around the partially restored mill, and presents her with the teapot, which looks as good as new. But she rebuffs his proposal, then accidentally shatters the teapot. Instead, Cary decides her place is with her children, who give her the one gift she doesn’t want: a television, described in the film as the refuge for lonely women. The TV salesperson tells Cary she’ll have “life’s parade” available to her in that little electronic box, but all Cary sees is her own reflection—again, alone. 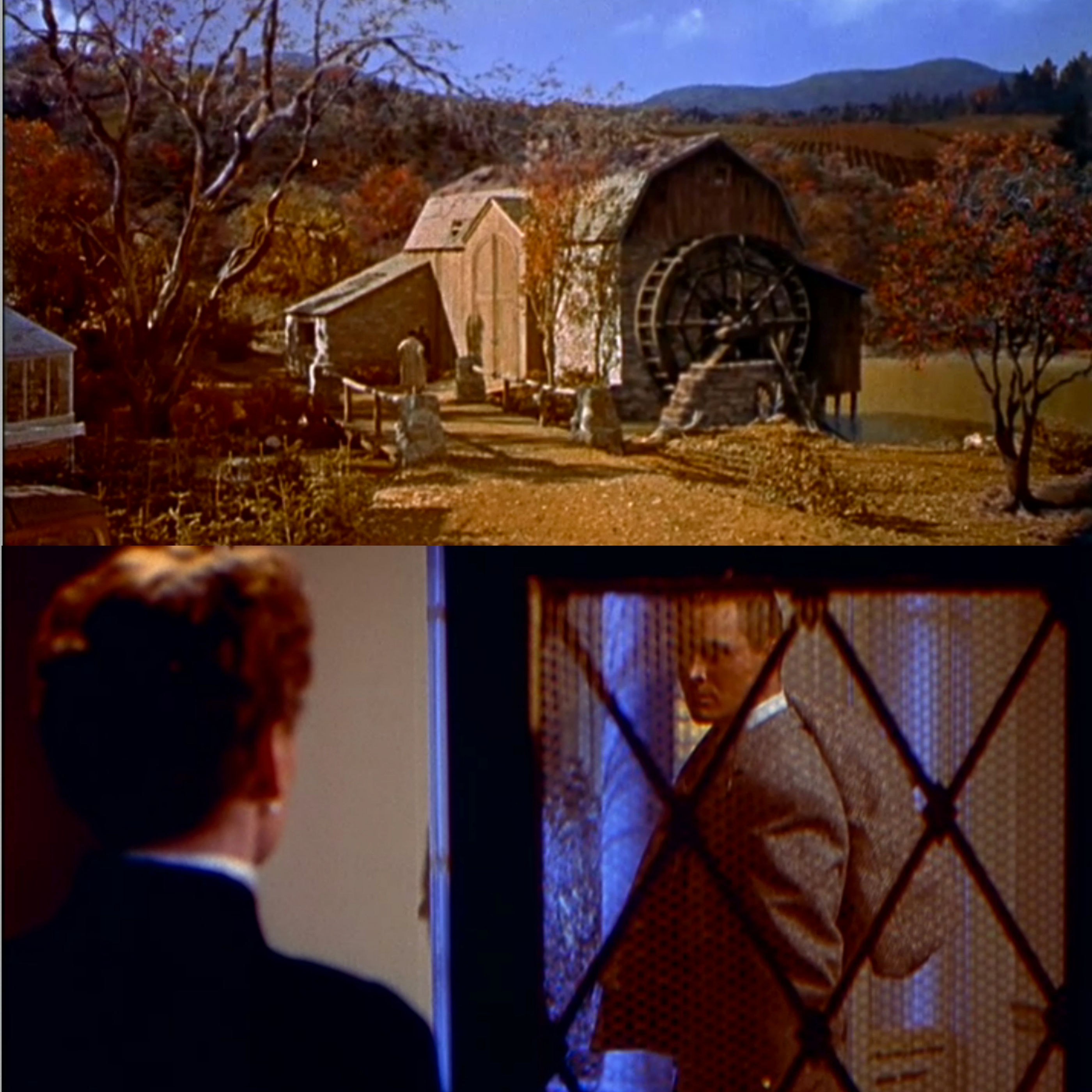 The old mill and the screen

One of the great ironies of All That Heaven Allows is that Cary’s kids and close acquaintances look down on a man who owns land and property that today would make him a millionaire. Ned tells his mother he’d be ashamed to bring his friends over to Ron’s house if she moves in with him, but Ron’s house is amazing: a cozy home in the country with huge windows looking out on trees, water, and snowy fields. By contrast, while the Scott house is lavishly decorated, it lacks life. Everything is gilded, and everything has its place. Where Ron has a big picture window, Cary has a screen, blocking her off from the outside world—and even from her children, when Ned threatens never to see her again if she marries Ron. In and of itself, the screen is beautiful. In the context of Cary’s argument with Ned, it’s a barrier. This is what Sirk does over and over with All That Heaven Allows: He constructs an image to fit the situation, then reveals that there’s more to that image than what’s apparent on the surface.

Tomorrow, our Movie Of The Week forum explores what the movie has to say about the conformity and skewed values of the 1950s. And on Thursday, Keith Phipps takes a look at Mark Rappaport’s experimental 1992 documentary Rock Hudson’s Home Movies, included as a bonus feature on the new Criterion edition of the film.