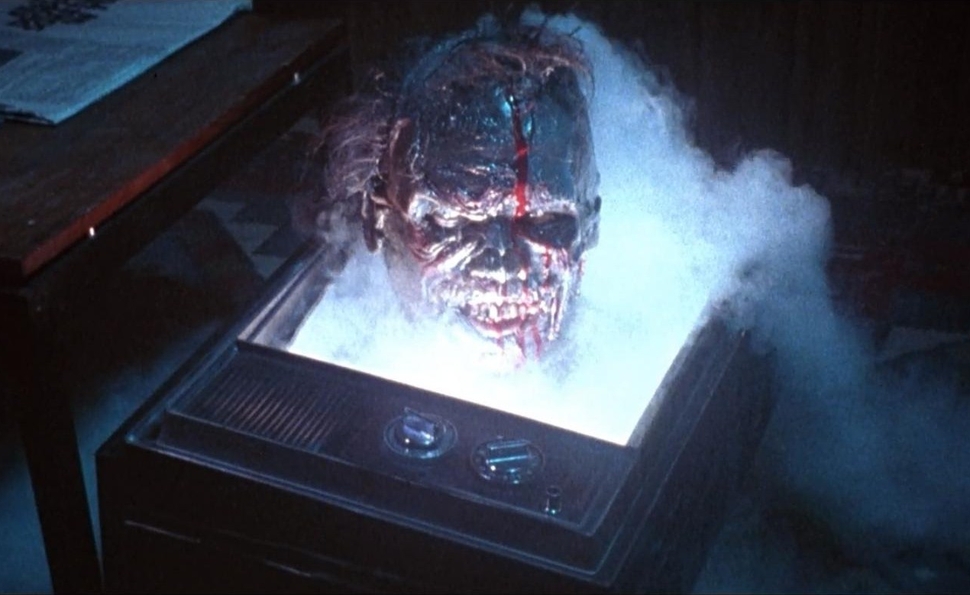 Kill your television (before it kills you)

Otto (Emilio Estevez) doesn’t spend a lot of time at home in Alex Cox’s 1984 cult classic Repo Man, but when he does, he doesn’t get a lot of hassle from his parents. They’re too busy staring at the television, specifically the seemingly endless telethon of Reverend Larry, who’s blunt about his mission. “I do want your money,” Larry says, “because God wants your money.” Though they look the part of aging hippies and share a joint while watching the reverend, they don’t really seem to see any contradiction between their past beliefs and Larry’s warnings against “liberal humanism.” The times have changed, the television is telling them what to do now, and that’s all the guidance they need.

Repo Man plays their hypnotized state for laughs, but the scenes of Otto’s parents also feed into the film’s pervading sense that the world is going to hell while everyone’s too brainwashed to notice. TV is hardly the whole of the problem in Repo Man, but it’s clearly part of the problem, and not a small part, either. The fear of television, extending beyond movies’ long competition with TV, could be found in a lot of movies released around the same time, David Cronenberg’s Videodrome not the least among them. And though no other film followed that fear as far down the philosophical rabbit hole as Cronenberg’s, others were picking up some of the same worrisome signals.

In the 1982 film Poltergeist, only Carol-Ann (Heather O’Rourke), the youngest member of the catalog-ready, suburban Freeling family, can hear beneath the white noise being broadcast at the end of one station’s programming day. What she hears doesn’t bother her. In fact, it entrances her, making it all the easier for the restless supernatural spirits on the other side of the screen to draw her into their world. Tobe Hooper is the film’s credited director, but the heaviest creative stamp belongs to producer and co-writer Steven Spielberg, who uses the opportunity to offer a darker take on the suburban idylls of Close Encounters Of The Third Kind and E.T. (The latter hit theaters a mere week after Poltergeist.) The suburbia of Poltergeist is one of bike-friendly streets and carefully mowed lawns, but also one of busy, distracted parents who couldn’t possibly know what their kids are up to at all times, even if they didn’t use bedtime as an excuse to sneak off and smoke pot. And so television picks up the slack.

This wasn’t a new phenomenon. “Television was my stepparent,” Spielberg told Time in 1982, speaking of his own suburban upbringing in the 1960s. But the role of television was changing, or at least growing, in the early 1980s. With the spread of cable and satellite dishes, and their many channels with relaxed standards toward sex and violence, the television landscape suddenly became much larger and wilder than it was in the era of four or five channels. With a remote in hand, viewers could, in theory at least, explore strange new worlds without leaving the couch. Where Videodrome suggested this would invite harder and harder material to meet the demands of an increasingly jaded public, Poltergeist pondered an outside threat from worlds beyond. TV is mostly a convenient portal for the spirit world in Poltergeist, but the film’s choice of portal isn’t accidental. With so much being shown on so many channels, who could keep up with them all? What were they all saying? And what was it doing to the kids?

A similar anxiety is at the heart of Halloween III: Season Of The Witch, a wickedly nasty in-name-only follow-up to John Carpenter’s Halloween and its sequel. Looking to depart from what came before, Carpenter turned to British writer Nigel Kneale, best known for creating the character of scientist hero Bernard Quatermass. (Kneale’s work also influenced Carpenter’s later Prince Of Darkness, which features a screenplay credit for “Martin Quatermass.”) Kneale later took his name off the project, with the script credit going to director Tommy Lee Wallace, but the film still resembles a distant cousin of Quatermass And The Pit in the way it pits modern heroes against an ancient evil.

Here, it’s an ancient evil using contemporary technology. In the interest of space and sanity, it’s best not to get into the nuts and bolts of the film; the details include murderous robots and the theft of one of the slabs at Stonehenge. The thrust of the narrative involves the evil plot of Conal Cochran (Dan O’Herlihy), an Irish-American billionaire in the town of Santa Mira, California (a name familiar to fans of Invasion Of The Body Snatchers) who’s made his fortune with the Silver Shamrock Novelties, selling everything from practical jokes to Halloween masks. The latter figures into his plans to mass-murder children as part of an ancient pagan sacrifice, a murder accomplished by attaching microchips to the back of masks that will either fry their wearers’ brains, or turn their brains into insects (it’s never entirely clear) when they watch a commercial aired on Halloween night.

Though Halloween III was widely dismissed at the time, and is undeniably silly in some respects, it offers a lot to digest by capturing an America filled with small towns just barely hanging on in a bad economy. “I suppose you shop at the new mall just like everybody else,” Ellie (Stacey Nelkin), the daughter of a murdered shopkeeper, says to Daniel (Tom Atkins), a doctor investigating the shopkeeper’s mysterious death. Santa Mira has struck a devil’s bargain, almost literally, with Cochran to stay in business. If that means slaying a few children, well, so be it.

What’s creepiest about Halloween III is how easy those children are to slay. The film only shows one on-camera child murder, and it’s a brat as hard to mourn as Veruca Salt. But many scenes in Halloween III show kids eager to buy what’s being sold on TV, and to then return to the TV for further instructions. Anyone who’s ever seen the film can probably still sing the obnoxious Silver Shamrock jingle (“Eight more days to Halloween/Halloween/Halloween…”), a song that, like all effective jingles, burrows past the part of the brain that likes or dislikes what it hears, and settles in the part that never forgets things, and possibly in the lobe that follows instructions without thinking. The films concerns a plot to kill kids, but it’s inspired by the fear they were already being turned into zombies.

In the 1986 horror-comedy TerrorVision, television again serves as gateway to a threat from beyond, though this time, the threat is extraterrestrial. Here, an obnoxious Los Angeles family, the Puttermans, purchase a cut-rate satellite dish and end up hosting a murderous space mutant who looks a bit like Jabba The Hutt covered in Slurpees. They’re a collection of 1980s stereotypes: Stanley (Gerrit Graham) and his wife Raquel (the always-priceless Mary Woronov) are swingers; their daughter Suzy (Diane Franklin) dresses in new wave-inspired clothes, but has a passion for hair-metal dudes; Sherman (Chad Allen) loves to play with guns and has a particular fondness for his grandpa (Bert Remsen), a survivalist who’s turned a portion of their home into a weapons-filled bunker.

Directed by Ted Nicolaou and produced in part by Albert and Charles Band—all of whom would soon be turning out delightfully low-budget horror films for the home-video market under the Full Moon banner—TerrorVision is mostly an excuse to kill off one obnoxious character after another in a house filled with tacky faux-Nagel posters, but there are moments of subtler commentary underneath all the squishy tentacles. The monster makes its first appearance on television, where it’s indistinguishable from other strange programs at the far end of the dial. Later, Sherman watches as the images on his TV shift from the real monster to a horror-movie show hosted by the Elvira-inspired Medusa (Jennifer Richards), a scene that gets at the heart of the entire cathode-tube-phobic trend. Even though he knows the monster represents a real threat, Sherman is entranced by the screen. In that moment, it’s just more TV: Always on, transmitting something to whoever’s watching. But who really knows what they’re seeing?

Television is a gateway for monsters in Demons 2, Lamberto Bava’s 1986 sequel to his hit of the previous year, which found demons overwhelming the audience of a horror movie at a Berlin movie palace. (For the sequel, Bava essentially shrunk the action to fit in a luxury apartment building.) But the award for most literal use of television as a tool of evil has to belong to The Video Dead, a low-budget zombie movie that hit video shelves in 1987.

Here, it’s a particular television that’s evil, one that inexplicably plays the same zombie movie at all hours, then, in time, spits out the zombies in the real world. They mostly trouble a teen boy named Jeff (Rocky Duvall) and his sister  Zoe (Roxanna Augesen), a college student majoring in aerobics with a minor in music videos. They’re unsure what to do until Joshua (Sam David McClelland), a man from Texas, shows up to help them fight the undead. It is, in almost every way, a stupid movie, and a cheap one too, one whose monsters sometimes appear to be wearing gobs of hastily painted papier-mâché. Yet there’s an exchange that sums up the era’s vague, persistent worries about the medium, worries that kept popping up in the strangest places, with an accidental poetry. “The TV don’t kill nobody,” Joshua tells Zoe. “It’s what comes outta the TV does the killing.” When she asks why he doesn’t just destroy it, he replies “Don’t you think I tried? But you can’t. It sneaks into your brain and… plays tricks.”

Our Movie Of The Week discussion of Videodrome ends here. Don’t miss Tuesday’s Keynote on the film’s eerily familiar vision of technology fused with biology, and Wednesday’s staff forum on the film’s sex, violence, and legacy. Next week, we delve into the patriotic cynicism—or is it cynical patriotism?—of Frank Capra’s Mr. Smith Goes To Washington.