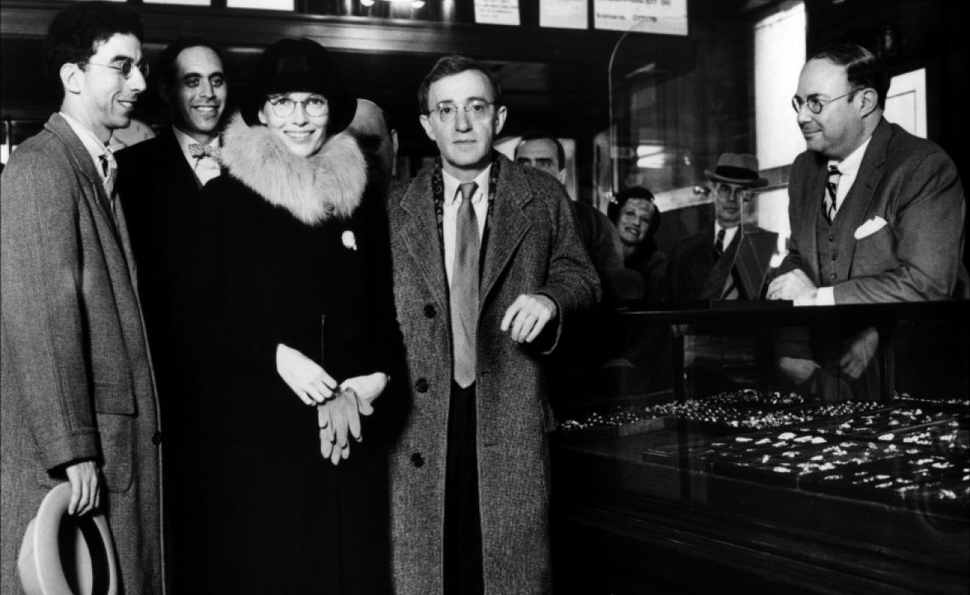 When Woody Allen started doing stand-up in 1961, the culture of comedy was changing. Previously, the biggest comics tended to create personae, which they’d then play onstage and onscreen in perpetuity. By the end of the 1950s, a new wave of comics emerged who played “themselves,” making funny observations drawn from their own lives. Allen did a little of both. His jokes were rooted in his identity as a frail, neurotic New York Jewish intellectual, who could drop knowing references to literature, philosophy, and psychotherapy, all while kvetching about his unpopularity with women. But that identity was, in part, a put-on. Allen started making money as a comedy writer and entertainer when he was a teenager, and had much more interest in show business than academia. He was a college dropout who grew up in working-class Brooklyn, and was something of a jock in high school. Allen was no dummy; he undoubtedly understood his own jokes. But did he really spend his leisure time reading Kierkegaard? Or was that just his character?

Allen hasn’t gotten enough credit over the years for his work as an actor, perhaps because of the longstanding perception that he only plays himself. Even when Allen casts somebody else to play one of his movies’ intensely neurotic leading men, critics refer to it as “the Woody Allen role,” as though what Allen does can be reduced to a series of tics, gestures, and inflections. Yet Allen’s filmography is fairly varied, with periodic changes in what that “Woody Allen role” is. And Allen has adjusted his public self over the years, too, to correct mistaken impressions and counteract scandals. Sometimes, he’s been more than willing to be what people expect him to be. At other times, he’s rebelled against his own image.

One of the first big pivot-points in Allen’s career as a public figure and professional comedian came in 1976 and 1977, first when he starred in The Front (a film written by Walter Bernstein and directed by Martin Ritt), and then when he made his Best Picture-winning semi-autobiographical comedy Annie Hall (which won Allen Oscars for Best Director and Best Original Screenplay). Prior to The Front, Allen mostly played characters on film that were less like the name-dropping nebbish of his stand-up act, and more like somebody who’d escaped from the Hollywood screwball comedies of the 1920s and ’30s. Aside from 1972’s Play It Again, Sam (directed by Herbert Ross, and based on Allen’s own play), in which Allen stars as a loveless schlub who’s an exaggerated version of his stand-up persona, the Allen of movies like Bananas, Sleeper, and Love And Death draws inspiration from Bob Hope, delivering deadpan quips while stuck in increasingly absurd, surreal situations. In these films, Kooky Allen prevails. 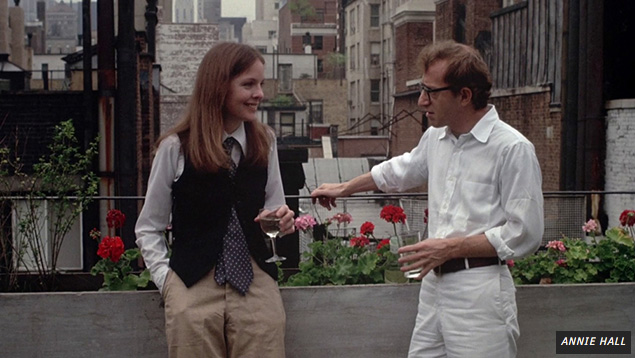 Though The Front is partially a comedy, Allen’s character is one of his straightest: a streetwise hustler who makes extra money slapping his name on scripts by blacklisted writers. Ritt and Bernstein give the material a light touch, but Allen is playing someone grounded in reality. He then carried that more natural, down-to-earth style over to Annie Hall, which is sprinkled with fanciful and slapstick moments, but is mostly about a comedian’s real, un-movie-like romantic travails. Allen’s characters in these two movies don’t feel like scripted comic constructions; they feel like savvy, witty guys reacting honestly to everyday situations.

This was the dawn of Serious Allen: the guy who paid straight-faced homage to Ingmar Bergman and Federico Fellini, and would write and direct the occasional moody drama. Even Allen’s comedies became less zany and more poignant, with a classier air. As the 1970s gave way to the 1980s, Allen’s films grew more sophisticated and diverse, as the likes of Manhattan, The Purple Rose Of Cairo, Hannah And Her Sisters, and Radio Days became awards-season standouts. Allen stayed on a one-movie-a-year pace, with each one being a cinematic event—at least among critics and cineastes. Allen’s box-office returns were mostly modest, but his movies generally did well enough to recoup what they cost. 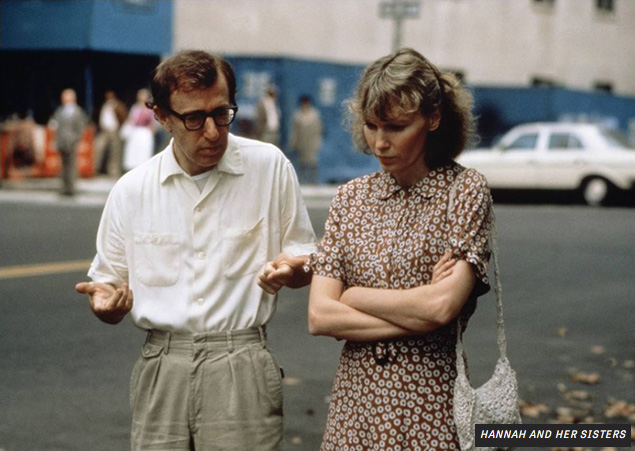 Around that time, Allen’s public face started to change. In the 1970s, “Woody Allen” as a character was so well-known that he inspired Stuart Hample’s daily newspaper comic strip Inside Woody Allen, which ran from 1976 to 1984, with gags occasionally supplied by Allen himself. Onscreen, Allen didn’t deviate much from that character, generally playing funny-but-whiny guys with showbiz jobs and persistent woman troubles. But Allen also appeared in his own films less than he had before, and offscreen, he retreated. He gave fewer interviews, and became famous for spending Oscar nights playing clarinet in an old-timey jazz band at a New York club. In the 1980s, reporters wrote the same story about Allen over and over, painting him as an aloof Manhattan aesthete, living across Central Park from his longtime girlfriend Mia Farrow and her brood of adopted kids.

Then the story took an unexpected turn. In 1992, news broke that Allen had been having an affair with one of Farrow’s adopted daughters, Soon-Yi Previn, since she was 19 years old. A messy court battle ensued, complete with allegations of child molestation and many, many magazine and newspaper thinkpieces connecting Allen’s personal life to the guy he played in his films (in particular, his Manhattan character, who romances a teenager). Allen didn’t make it any easier on himself with some of the movies he made in the 1990s. He’s always claimed coincidence, but Allen’s last film with Farrow, the brittle 1992 relationship dramedy Husbands And Wives, sure seemed inspired by their actual break-up, even though it was written and shot before it happened. Allen’s first film after the scandal, Manhattan Murder Mystery, re-teamed him with his Annie Hall co-star Diane Keaton, as if to reassure fans that at least one woman he used to be involved with still supported him. As the decade wore on, movies like Mighty Aphrodite, Deconstructing Harry, and Celebrity adopted an earthier tone than the wistful, whimsical 1980s movies. The characters swore more, and their sexual urges were less cute, and more base.

The most significant Allen film of the 1990s is Barbara Kopple’s documentary Wild Man Blues, which is ostensibly about Allen touring Europe with his jazz band, but is really about rebranding Allen as a sweetly curmudgeonly old man, leaning heavily on his true love, Soon-Yi. This is the face Allen continues to show in public: just an ordinary guy, grinding slowly through another exhausting day, with the help of the eternally patient woman he was lucky to find. Forget art films and philosophers; in his rare interviews over the past decade-plus, Allen has said he just likes to put in a 9-to-5 day at his job like anyone else, then knock off to drink a beer and watch sports. This is Ordinary Allen—the kind of guy who could credibly play the working-class slob of 2000’s Small Time Crooks. 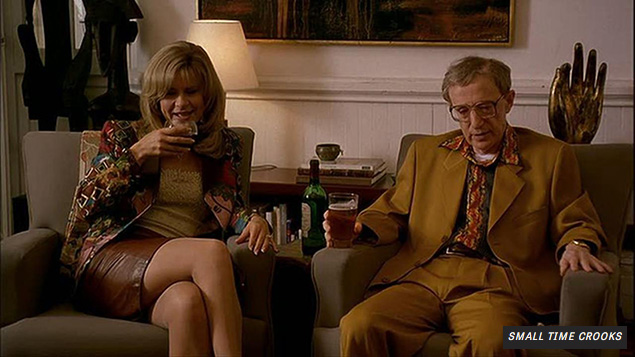 Professionally, Allen has rebounded in his later years from the box-office doldrums of the 1990s, generating hits like Match Point, Vicky Cristina Barcelona, and Midnight In Paris—a mix of pretty-looking romances and genteel crime pictures, mostly. On the whole, the Allen films of the 2000s and 2010s are mellower and less challenging than Allen’s 1970s, 1980s, and 1990s work, and when Allen appears in them, his characters are usually likeably low-key, and not as cutting as they used to be.

So which Allen is the real one? Probably all of them. That’s what makes Allen’s 1983 mockumentary Zelig such a visionary film. It’s not just that Allen seems to be sneakily describing himself when another character calls the chameleonic, eager-to-please hero Leonard Zelig “the kind of man who preferred watching baseball to reading Moby Dick.” (That line was spoken at a time when Allen would’ve been pegged more as a reader.) Throughout the movie, reporters, scientists, and the general public all try to pigeonhole Zelig, defining what he represents and who he should be, just as people have done to Allen for more than 50 years now. In the end, Zelig chooses to be ordinary. But all of those other characters and types are still in there, ready to emerge as differing aspects of his true self.