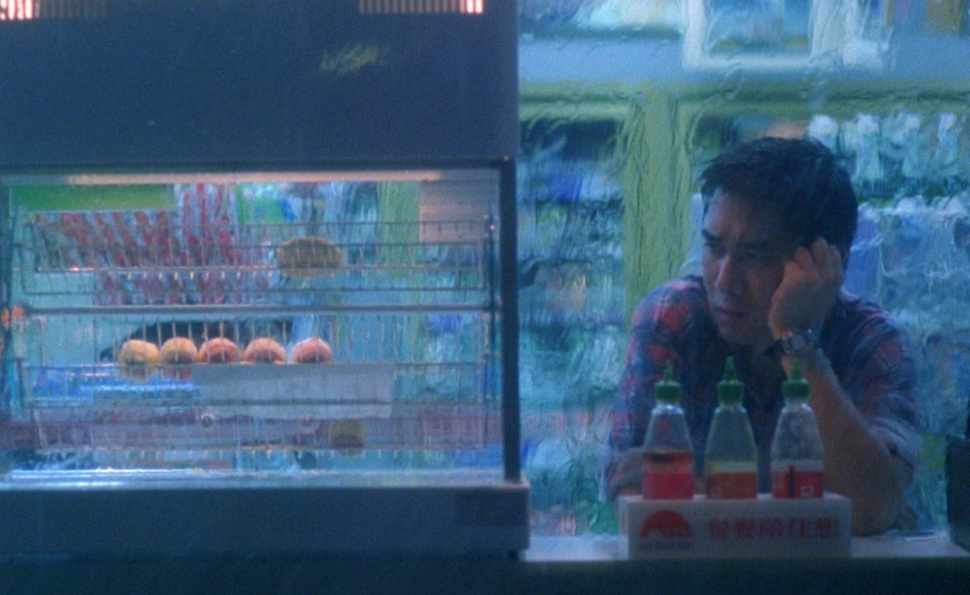 “It’s not every day we’re gonna be the same way,” Dennis Brown sings on his 1972 reggae hit, “Things In Life.” “There must be a change somehow.” Brown’s song plays at several moments during the first half of Wong Kar-wai’s 1994 film Chungking Express, and in many respects, the film is about characters learning how to hear it. The film is filled with moments reinforcing the inevitability of change and the irreversibility of time—and how those who refuse to accept this do so at their own peril. But it’s also filled with repetition and reflections, finding unexpected patterns and parallels in the midst of a chaotic urban setting—and with them, the possibility, however faint, that change might be for the better. These, too, are things in life.

Stripped to its barest plot synopsis, Chungking Express tells the story of two Hong Kong policemen who, after unexpectedly getting dumped by their girlfriends, struggle to move on. The film first introduces Cop 223 (Takeshi Kaneshiro), who, on the cusp of turning 25 on May 1, pines for contact with the girlfriend who’s left him. Wong tells his story in parallel with that of a mysterious woman in a blonde wig (Brigitte Lin), for whom May 1 also has significance: It’s the day she needs to complete a major drug-smuggling operation, or face dire consequences. Later, Chungking Express shifts focus to Cop 663 (Tony Leung Chiu-wai), whose heartbreak comes from the departure of his stewardess girlfriend (Valerie Chow). Observing his situation is Faye (Faye Wong), an employee at the Midnight Express food stand that both cops frequent. Before long, her observation develops from passive curiosity to active, almost mad, interest.

Despite the similarities between the film’s two narratives, Chungking Express is divided unmistakably down the middle. About 40 minutes in, Cop 223 brushes by Faye, and over a freeze-frame of the moment, says, “Six hours later, she fell in love with another man” as The Mamas & The Papas’ “California Dreamin’” takes over the soundtrack. It’s the last we hear from him—though hardly the last we hear of “California Dreamin’”—and from this point forward, Chungking Express becomes a different sort of film, albeit one whose two parts complement each other.  In her liner notes for the Criterion Collection DVD and Blu-ray release of the film, Amy Taubin calls Chungking Express a turning point in Wong’s career, pointing to this moment as “a shift in direction that’s actually signaled within the film, when the desultory underworld-revenge narrative fades away and is replaced by a love story.”

The two halves don’t look or feel the same, either. The cinematography is credited to Andrew Lau and Christopher Doyle, with, as Tony Rayns explains on the commentary track, Lau mostly shooting the first story, and Doyle—who’d collaborated tumultuously with Wong before, and would collaborate tumultuously with him again—mostly shooting the second. By this point, Lau had already started what would be a long, successful career as a director, mostly of action films, and he brings a frenetic energy that suits the film’s first story as well as Doyle’s dreamy, lingering approach suits its second. Both are guided by Wong’s sensibility, however, which mixes handheld, seemingly seat-of-the pants shots and start-stop editing with breathtaking compositions. (Think of Wong crouching beside her own gauzy reflection on Hong Kong’s Central Escalator, which runs outside 663’s house, or any of the shots that frame characters between obscured foreground objects.) The difference is subtle, but it’s there. Watching Chungking Express doubles as an example of how two different cinematographers solved the same problem of shooting a feature film quickly but beautifully, for a director who was making it up as he went along. 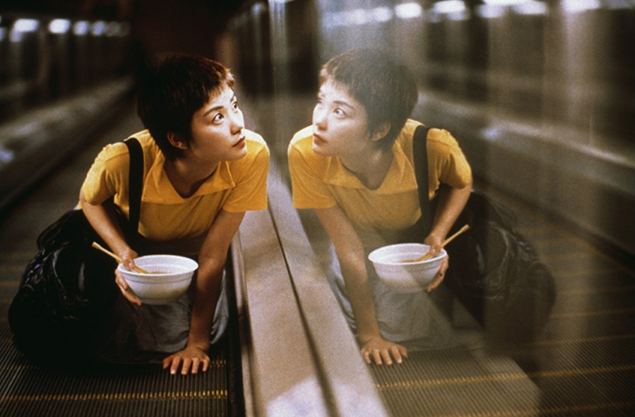 Or almost as he went along. Wong shot Chungking Express in the middle of a production break during the protracted shooting and editing of the martial-arts epic Ashes Of Time (a striking, meditative, extremely Wong-esque film that has little in common with a traditional wuxia entry). It wasn’t on a whim. Wong had a contract that required a second feature, and a production company to keep afloat. So, as David Bordwell recounts in his book Planet Hong Kong, Wong “stitched together script ideas he had been considering for years,” then shot the film in sequence and wrote “each scene the night before or even the morning of the day it was to be shot.”

Though necessitated by circumstance, shooting faster and looser seems to have opened Wong up to new ideas. Yet, just as in the world of the film, there’s order within the chaos. Though made in an urgent heat, it’s a deeply considered, beautifully constructed film that captures the feel of a particular place at a particular time—and of characters of a particular age, specifically the age when it first becomes apparent that time only runs one way, even if the world seems to be eternally repeating itself.

Wong doesn’t offer enough for viewers evidence to determine whether Cop 223 is any good at his job. In the film’s most energetic sequence, he makes a bust, but once he fixates on Lin’s mystery woman at the bar, he ignores the drug smuggler under his nose. (Literally, at times.) He’s too blinded by heartbreak to notice. Heartbreak has a way of doing that, especially in this film. 223 will soon celebrate his 25th birthday, and like all the dates in the film, that’s significant. It’s the age when, for many people, life stops being theoretical, when those who’ve previously consigned careers, marriage, parenthood, and other responsibilities to the world of grown-ups start to realize they now live in that world. 223’s girlfriend is gone, and for much of his sequence, he lives in denial about what “gone” means, engaging in magical thinking as he saves, then gorges on cans of pineapple with a May 1 expiration date. And yet, as Wong illustrates in shots of a clock rolling over, the date draws nearer, and his girlfriend remains just as far away.

The turning of the clock was much on the mind of Hong Kong residents, with the territory’s looming transfer of sovereignty from the United Kingdom to China on July 1, 1997. Citizens of Hong Kong didn’t know what to expect, and many chose to leave, the ranks of emigrants swelling in the wake of the Tiananmen Square crackdown in 1989. Those who stayed leapt into the unknown, and that instability informs many films made in Hong Kong at the time that represented, coincidentally or not, a golden age for the industry. Bordwell notes, again in Planet Hong Kong, that while images of flight and escape dominate the second half of Chungking Express, the first half is obsessed with looming deadlines—the birthday, the pineapple cans, the drug deal—and consequently driven by its main characters’ nervous energy.

Countering that is 223’s narration, which remains romantic and idealistic even in the midst of his personal disappointments and the chaos of the area he patrols, home to residents from around the world, and anchored by the mix of shops, makeshift restaurants, and living quarters known as Chungking Mansions, a 17-story complex that covers five blocks. The film suggests that any attempt to impose order on such a place would be futile, and that the future of Hong Kong will be decided as much on the street as from above. Time may be running out for Hong Kong as they know it, but some things never change: It’s hard to imagine any situation that will make Chungking Mansions any less crime-ridden, just as it’s hard to imagine 223’s girlfriend coming back to him. Nevertheless, 223 deludes himself with his hopefulness about his job and his love life, but the film doesn’t mock him for it. Even if evidence suggests that the blonde mystery woman’s defeated terror makes more sense as a response to the world they share, the film remains on the dreamers’ side. 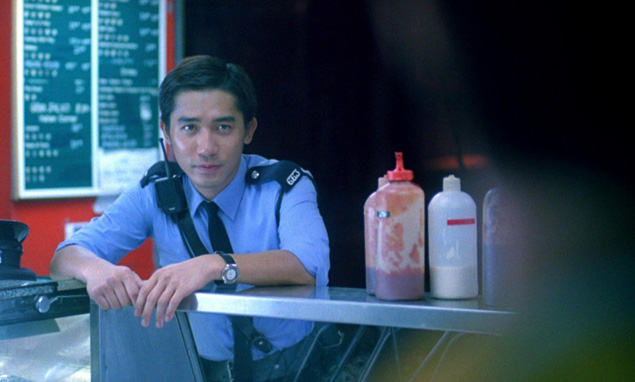 Despite his apparent world-weariness, Cop 663 also falls into the same hopeful camp by the film’s end. Once abandoned, he holds no illusions that his departed girlfriend will ever return, falling into such a shuffling funk that he fails to notice that the lovestruck Faye has begun sneaking into his apartment, tidying it up, replacing worn-out bars of soap and dish towels (with which he’s held conversations, due to his loneliness), and otherwise inserting herself into his life. He’s feared change, but a welcome change is ready to embrace him. Only it isn’t quite that simple. Faye seems like an obliging lifesaver—the sort of manic pixie dream girl who became so prominent in film shortly after Chungking Express—if she didn’t seem half-cracked, and if her impish energy didn’t have such a desperate undercurrent. In the end, she opts to make her own escape, flying off to the real California she’s only heard about in song, rather than joining 663 at the bar that bears the state’s name. The film ends on an ambiguous note, a year after she fails to show. Both Faye and 663 seem to be in better places in their lives, but those places aren’t with each other, and might never be. Sometimes escape means leaving what you love behind.

Much of the melancholy beauty of Chungking Express—and later Wong films, for that matter—comes from missed connections, mad love, and soured romances, pairings with little chance of working out, however much heat they might generate in the moment. In many of his later films, the bitterness started to overwhelm the sweetness. (There are few movies more romantic than In The Mood For Love, but also few as inescapably sad.) Shot quickly and loosely in the middle of a place staring down enormous change, Chungking Express ultimately feels more sweet than bitter, defined by a tone of long-shot hopefulness and a sense that maybe it might all work out for those heartbroken young people—the ones whose beautiful faces and sad eyes Wong casts in the neon glow of a terrible, wonderful, forever-changing city, as they watch the first acts of their youth draw to a close.

Tomorrow, our Movie Of The Week discussion of Chungking Express will explore the film’s obsessions with time, history, and pop culture; Wednesday, Mike D’Angelo will dive deep into a single shot from the film that’s one of his favorite in all of cinema.