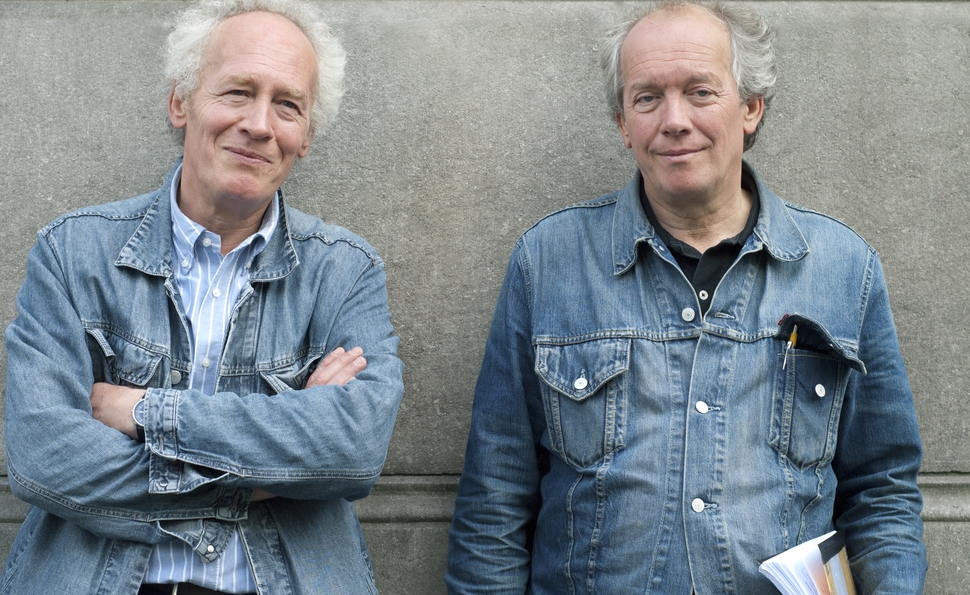 The Dardenne brothers on making one kind of movie extremely well

Luc and Jean-Pierre Dardenne essentially only do one thing, but they do it extremely well. Over the last two decades, the brothers from Belgium have perfected their lightly fable-esque strain of neo-realism, tempering their remarkable consistency with breathless urgency. While all the Dardennes’ films find a working-class character in a crisis that pits money against morals, the unique vitality of their protagonists ensures that they’re never repeating themselves. Their films are shot in the greyest pockets of Belgium, and they achieve a convincing vérité realism via painstakingly choreographed handheld cinematography, but the stories these men tell are defined by their wrinkles.

A woman recovering from a nervous breakdown and on the verge of another, Two Days, One Night protagonist Sandra (Marion Cotillard) is a quintessential Dardennes heroine. Threatened with being fired from the factory job she needs to support her kids, Sandra is granted a weekend to convince her co-workers to give up their annual bonuses so her boss will have the funds required to keep her on. From its first frames, it’s clear Two Days, One Night is another Dardennes movie, but like all of their best work, it unfolds with the detail and immediacy of real life, where precedent and familiarity do nothing to diminish the moment at hand, or what can be gleaned from it. Powered by Cotillard’s astonishingly grounded performance, Two Days, One Night is heart-wrenching proof that some old dogs have all the tricks they need.

The Dissolve recently sat down with Luc and Jean-Pierre Dardenne to look back at their careers, discuss their process, and suss out how, after a career of casting non-professional actors, they felt about working with a bona fide movie star.

The Dissolve: Since 1996’s La Promesse, you’ve released a film every three years like clockwork. Is that schedule a natural rhythm, a mandate you’ve set yourselves, or something else?

Luc Dardenne: I don’t know if we really choose to do that. It just seems like we can’t do things any other way. I don’t know, every time we finish a movie, we say it’s time to start the next one, but for some reason it always seems to take three years. But we’re trying to get a little faster for the next one.

The Dissolve: Gender in your films is never an arbitrary decision. Why was it important to you that the protagonist of Two Days, One Night be a woman?

LD: We don’t know. It’s strange… The first time we spoke about the screenplay, 12 years ago, we thought of a woman. One could say that women are a little bit more vulnerable in terms of the work environment, but from the onset, a woman just imposed herself on this story.

The Dissolve: Your films always memorably begin in media res. Is beginning in the middle of an action a crucial approach for you in order to get into the reality of your characters?

Jean-Pierre Dardenne: We want the audience to have the feeling that things were happening before the camera started rolling, and also after the film ends. We feel it gives a little bit of weight to the presence of the character.

The Dissolve: Work, and the work environment, is often seen as a positive force in your films. But in this film, the work environment—the Salwal plant—is dehumanizing, and Sandra has to visit everybody outside the plant, in their homes, to reach them on a personal level.

LD: For us, the factory is not a negative place of work. What links Sandra to the others is that she’s connected to them through work. Without the factory, she’d be alone, and she’d fall back into depression. She goes and sees her co-workers at their houses because nobody works on the weekend, but it’s true that we could’ve made a film in which things went on inside of the factory. And we told ourselves—and Manu expresses it in the film—that Sandra has to see these people one-on-one, face-to-face, because had it happened in a group setting, she would not have been able to change the minds of her co-workers. She needed to go see them individually. So the question of solidarity becomes a moral one, because it’s not so easy to let go of 1,000 Euros, particularly when you’re only earning 1,400 a month. But the morality of solidarity only seems to become an issue when you’re directly confronted by the human being it affects.

The Dissolve: The idea of pitting employees against each other in this way seems Marxist, but it’s also perceived as selfish—if not downright evil—in the moral scheme of this film. Do you feel this film is anti-Marxist in that sense?

JPD: It’s true that it’s very hard to have solidarity in the working world as it is today, because people don’t know what’s coming down the pike tomorrow. There’s enormous job insecurity, and the workers are programmed to be pitted against one another in a competition to survive. And you have this fragile little character of Sandra who is going to fight to re-create what has been lost in terms of solidarity, and she’s going to struggle, and she’s going to restore a certain solidarity between the workers during her trials. In the beginning, she’s pushed by her husband, but it comes to be a strength she finds in herself to pursue that.

LD: And she will get to the point where she expresses that it’s more important to have solidarity than it is to have work.

The Dissolve: One of the recurring questions in the film is whether Sandra is even well enough to work. The film initially says she is, but her eventual relapse casts doubt on that idea.

JPD: It’s true that she remains a fragile woman, but her fragility is underscored by her reactions to others. When her fragility is accentuated during her suicide attempt, it’s really because she has an increased feeling of no longer having any value in the eyes of the others, and ultimately a feeling of not even existing for them. That’s why Manu pushes her to go see her colleagues, because he impresses upon her that seeing these people will be the only way for her to pull herself out of her depression. He knows that when Sandra goes to see the others, she’ll see her value reflected in their eyes.

The Dissolve: Olivier Gourmet may be my favorite working actor. His character represents the opposite of solidarity, and in some respects that’s a role he’s played before. Is there something about him as either a man or as an actor that you see as an embodiment of individualism, whether for better or for worse?

JPD: No… he’s a very versatile actor, and can do a lot of different things. But I will say that it’s not easy to get into his world. He’s very opaque.

LD: With or without glasses! [Laughs.] But he’s able to talk in a way that’s extremely cold. He can change his register really fast, and it’s complex characters that do that. He has a lot of authority, also. But I also think he could play a coward, or someone who’s frightened and submissive. He’s a great actor.

The Dissolve: Several times throughout the film, Sandra visits a co-worker’s home, and is greeted at the door by the co-worker’s child. Your films often speak to our collective responsibility to the next generation, but how important was it for you in this film to have children as these gatekeepers?

JPD: It’s our way of saying, “Watch out, the kids are watching.” The kids are witnesses to what their parents are doing. That’s why Julien says to his son, “Go home.” Because it’s not very glorious what’s about to happen in that scene. What are you passing on to your children?

The Dissolve: In regards to Marion Cotillard, did working with Cécile de France in Kid With A Bike convince you that you were comfortable working with celebrities, and weaving them into your blue-collar worlds?

LD: Maybe if we’d had a bad experience with Cécile de France, we would have been reluctant to go through that whole process again, but we worked well with her, and she brought a lot to the movie. She didn’t have the lead role in that film, but we saw she was able to put herself on the same level as the child as soon as she came to rehearse with him before the shoot. It was also that Cécile wanted to work with us. And celebrities, like Marion, they know how we work, and they know we’re not going to make special provisions for them, or treat them like stars. They know what the conditions are like, and if they want to come, that’s what they’re up for.

Marion, from the get-go, said, “Do what you want with me.” A lot of actors say that, but with her, it was real. So yes, she did a lot of prep work on her own—she listened to certain music, she did readings, she lost some weight—but if we had said to her to put back on a few pounds, she would have done it. She participated in the costume, but we had the ultimate say on things. She was everything we wanted in an actor.

The Dissolve: She’s said in interviews that, in one of the scenes in this film, you shot 82 takes. Is that par for the course for you?

JPD: We do have a tendency to do a lot of takes. One of the reasons is that we do long takes, and all sorts of things can happen during those—the cameraman bumps into a wall, he loses his balance, who knows. And when something goes wrong, you have to do the whole thing over again. That’s the sport. But even when we rehearsed a long time, there are rhythms to a long take, and there are interior rhythms inside that rhythm. And to be on target with those rhythms will make the difference between whether we’ll be able to tell the story or not. And sometimes it takes time to find the right rhythm. We try different things. Once we have a take where the rhythm is right, we say we’re going to do a couple where we slow things down a little bit, and a couple where we speed things up, just so we know that we were right about our targeted rhythm. The shot for which we did 81 takes, that’s in the scene where Sandra falls in her bedroom. It’s very hard.

The Dissolve: There are a lot of superficial similarities between your films. When people draw attention to this, and suggest that your work is all variations on a theme, do you find that insulting? Do you enjoy the thought that all of your films could be different chapters of the same book?

JPD: Sometimes I wonder if we really decide much of anything. Up to this point, at least, we’ve never sat there and said to ourselves: “Hmm, are we going to shoot Two Days, One Night, or are we going to shoot a science-fiction film?” The only thing we know how to do is Two Days, One Night. Some filmmakers with a lot of intelligence and a lot of talent jump from one genre to another, and we’re stuck on the border of tragedy. [Laughs.] Some of the continuity also comes from the fact that we have actors we like to work with again from movie to movie. So you look at someone like Jérémie Renier—he’s a son in La Promesse, then he becomes a father who abandons a son in L’Enfant.