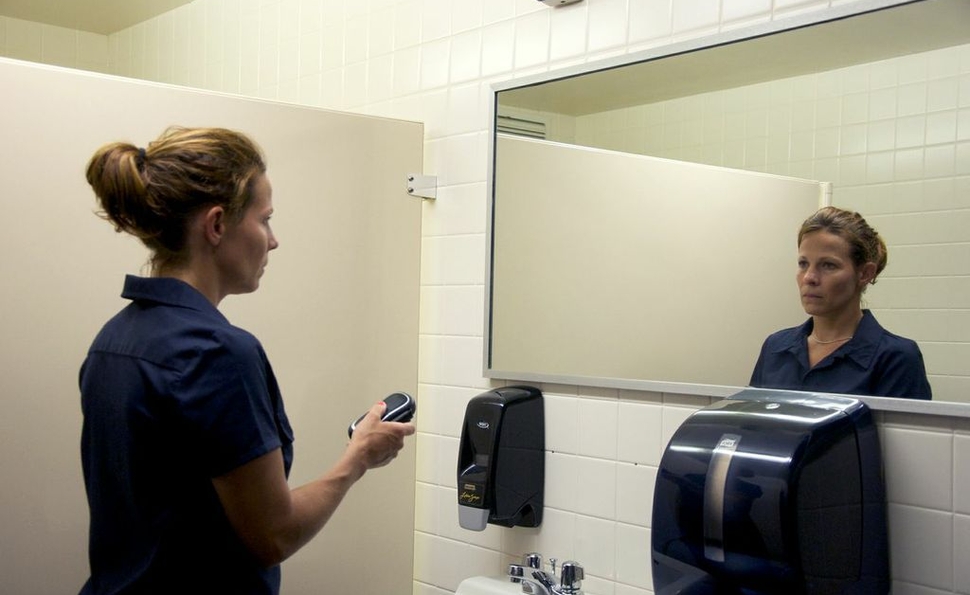 In the 1990s, movies like Dogfight and I Shot Andy Warhol made Lili Taylor practically synonymous with indie-film integrity, but in the early years of the new millennium, her appearances grew shorter and less frequent. After 2001’s Julie Johnson, with Taylor as a bonafide leading lady, was derailed en route to release, her momentum seemed to slow, although she made a strong showing on HBO’s Six Feet Under. But in recent years, she’s been turning up with welcome regularity, in movies like Public Enemies and the recent Blood Ties, and on shows like Almost Human and Hemlock Grove. Last year’s The Conjuring gave her the biggest hit of her career, and she’s back again with Tom Gilroy’s The Cold Lands, a long-awaited follow-up to 2000’s Spring Forward.

The Dissolve: Your character in The Cold Lands, Nicole, walks the line between sticking to her principles and shutting herself off from the world. She home-schools her son and keeps him away from violent videogames, but she also rebuffs the social worker who’s trying to check on her worsening medical condition. Did you key into anything about her in particular?

Lili Taylor: It was really more about keying into Tom and to what he was doing and supporting it, because he didn’t tell me that much at first. He could just say, “Do you want to do a movie?” and I’ll go. We had a theater company together, and I feel like I’m an actor with him but I’m also a collaborator, in some ways, and so interested in how he’s thinking about things and what he’s doing. I was interested in that, too. Not just the character, but the overall.

The Dissolve: Any parent can relate to some aspect of your character, like the moment when she’s looking disapprovingly at the ingredients on a bag of gas-stations nuts. But there’s also a real danger in trying to craft every aspect of your child’s existence because you can, as these people do, really cut yourself off.

Taylor: That’s where I felt really different. First off, I think Western medicine is there for a very good reason, especially when you need the big guns. I think society is important and learning how to live in society is important: I’m not an “off-the-grid”-er. So it was about empathizing with her, not judging, because I can disagree with my characters, but I have to understand. I got there to see the interesting things she was doing as well: instilling curiosity, making meaning.

The Dissolve: The Cold Lands was shot in the Catskills, more or less right where Tom Gilroy lives. Did you have a sense of whether the specific locations you were shooting in informed the way he wrote the scenes?

Taylor: Definitely. I’m on the other side of the river, I have a house up there, so it’s a much different area than where he is because he’s in the mountains. Just knowing how he works and knowing symbology and that everything has meaning, I really got how important place was. He explained why we were here and there, so I knew it, I got it.

The Dissolve: How much preparation is involved with a role like this? She says to her son at one point, “If you need people they think they own you, so it’s better not to need them,” which is such a terrifying philosophy of life. How did you get into that mindset?

Taylor: Well, I mean, imagination, because I don’t believe that, and even if I did, I wouldn’t teach my child that. First of all, we know parenting is tough and people do the best they can with what they have. It’s easy to judge parents, and now we know how hard it is.

The Dissolve: There’s a whole industry built around judging parents, or getting them to judge themselves.

Taylor: Exactly. I tried to imagine how she got to this, and how rigidity can really block off possibility. A lot of times that rigidity comes from a fear, or from a lack of ego strength. I mean that in how psychologists use it, that she doesn’t have a strong enough ego to contain more conflicting things.

The Dissolve: It’s easy as a parent to get stuck enforcing rules and forget you made them in the first place. Sometimes you stop and say, “Wait, why am I saying no to this?”

Taylor: Exactly, and being flexible. I know my kid loves it when I’m like, “You know what, yeah, I don’t know why I’m saying ‘no’ anyway.” She just lights up because I got honest. 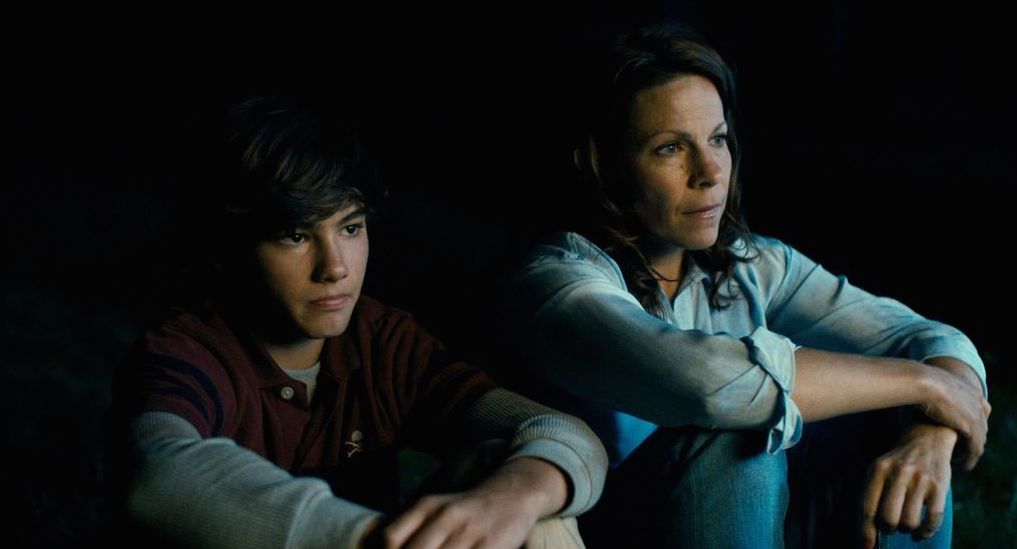 The Dissolve: The Cold Lands is shot in a realist style, but Gilroy does things like have your character appear to her son even after she’s out of his life. How did you play her in those scenes?

Taylor: I think being a realistic figment of his imagination, not an ideal version, but the mom he knew who was not always going to say the thing he wanted to hear.

The Dissolve: It’s interesting when she tells him, “There are lots of ways to be happy.” That doesn’t seem like something she would have said in life.

Taylor: Right. In some ways it wasn’t the ideal version, but maybe it was like how our internal parent changes and shifts. That might have been a way he was making his internal parent his own. Not idealized, but more modified.

The Dissolve: It must have been a pretty condensed shoot. How much was already in Tom’s head?

Taylor: A lot of it. He’d been with it for about a year and working with Silas [Yelich, who plays the son, Atticus] for a year. When we were going it was all very, very clear, all of it had been thought out.

The Dissolve: And that’s okay with you, coming into it that late in the game?

Taylor: As long as the director is able to be flexible, and he was. I think, especially with indies, you don’t have a lot of time to really know what you are trying to accomplish.

Taylor: I’m interested in the content, for sure. I find adolescence really interesting, and, I guess, an adolescent at any time. It’s funny because the play is [set in the] present but it doesn’t feel like social media is as present in it. I feel that’s a whole new thing.

The Dissolve: It’s really hard to depict social media right, in films and especially onstage. Only a few plays seem to have gotten it right.

Taylor: And it’s a whole new level of what kids are dealing with. That’s the only thing that it’s not hitting on but it’s hitting on all the other stuff.

The Dissolve: An independent film and an off-Broadway play aren’t unusual places to find you. But how did you end up in The Conjuring?

Taylor: That was great, James Wan is great. What’s exciting about him is he’s capable of doing a lot of different things. He’s doing Fast And Furious right now and I bet it’s going to be a really interesting one. His level of honesty and telling the truth, and yet he’s a really interesting filmmaker. Visually and collaboratively he’s doing great stuff. I’d work with him again in a second. I never felt like we were doing a horror movie, and what’s so great is it was all special effects, no CGI. It was all old-school, so you’re much more in the moment. With The Haunting it was all LED lights and cones and green screens, but here, it’s happening.

The Dissolve: You’ve also been doing more TV, as well as Netflix’s Hemlock Grove. What was that like?

Taylor: Netflix was great because it reminded me a little bit of the ’70s and Robert Evans and that Kid Stays In The Picture sort of thing. It felt exciting and new, and their presence was not felt. They really seemed to step back and let the creative people do what the need to do, and that was great. I’d work with Netflix again in a second. I think what they’re doing is great.

The Dissolve: And Almost Human?

Taylor: Well, that’s Fox. That’s almost the opposite model. It’s hard, they need those numbers when it’s happening and people aren’t doing that anymore. It’s about adapting and changing, and I don’t know what they’re going to do.

Taylor: I try to have a saying: “No contempt prior to investigation.” It helps keep doors open. There was a time in the ’90s when TV could kill your career, and then it changed. But, yeah, trying to stay open. RonHoward liked The Addiction, that’s why he cast me, and I thought, “Well, God, if you saw that and like that, man, say no more. I’m down.”

“I can disagree with my characters, but I have to understand.”

The Dissolve: One of the first interviews I did was with you, and I remember trying to score points by asking some loaded question about working with Ron Howard on Ransom. Your response was that he was great to work with and actually encouraged you to improvise. That knocked down quite a few glib assumptions.

The Dissolve: One thing that’s common among actors with long careers is that they seem to gravitate toward valuing the experience over the finished product, in part because you can’t control what happens to your performance in editing but you can control which sets you do or don’t show up on.

Taylor: That’s been my whole thing from the beginning, and that’s probably why I’m feeling okay and doing okay. So many of my things haven’t come out. If I was doing it for the result I would be fucked, or if I was making choices for a career reason. It’s been about the experience, and as a result I’ve had some great experiences. It’s about the collaboration and  the relationships.

The Dissolve: And then you end up in The Conjuring last year, which is the biggest hit of your career.

Taylor. Yeah, and for that one I did an iPhone audition. That says a lot about James [Wan]. The fact that he cast the actors he cast says so much about who he is. That’s one thing I say to young actors, “To thine own self be true” and to try to go for the experience because, you just nailed it, that’s where the control is. That’s what you’re going to have at the end of the day, and I’m happier for it.