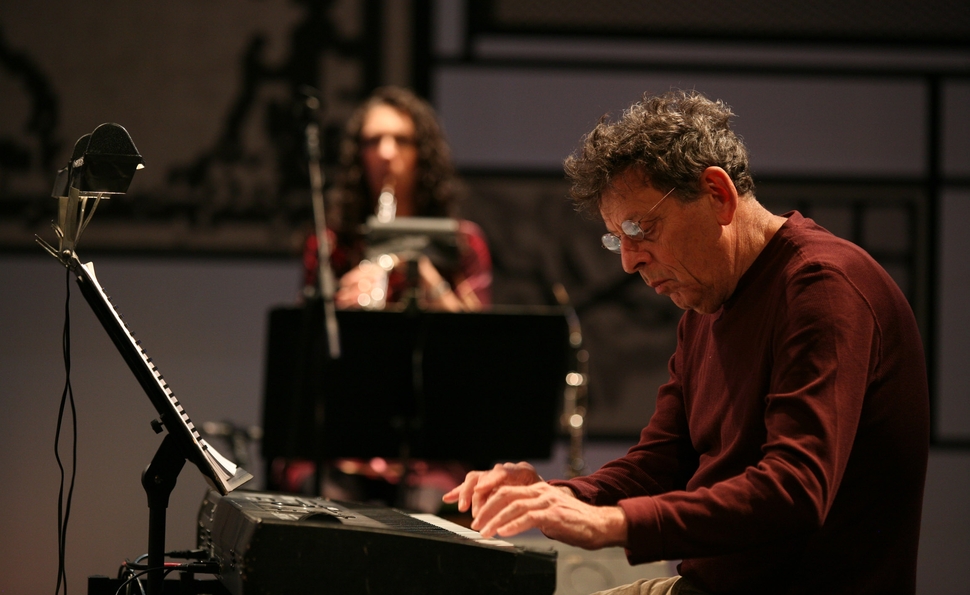 Music is a key component of filmmaking, but it’s hard to think of many films where image and sound are as inextricable as they are in Godfrey Reggio’s Qatsi trilogy: Koyaanisqatsi, Powaqqatsi, and Naqoyqatsi. Philip Glass’ scores hold together Reggio’s tumbles of abstract imagery and philosophical musings, providing a sense of unity and progression that makes them enthralling. Glass and Reggio’s fourth feature-length collaboration, Visitors, had its world première at the Toronto International Film Festival with a live orchestra playing Glass’ new score. The following day, Glass talked to The Dissolve about Reggio, Errol Morris, and using music to command viewers’ attention.

The Dissolve: Is it true that when Godfrey Reggio first contacted you about doing the score for Koyaanisqatsi, you told him you weren’t interested in doing film music?

Philip Glass: It wasn’t that I wasn’t interested. I didn’t know enough about it. As soon as I saw what he was doing, I was interested, and that was the first reel of Koyaanisqatsi. As soon as I saw it, I said, “Yes, I can do this.” But at that point, I was in my 30s—35, 36—I had a lot of experience working with theater, dance, and opera. I’d been doing that since I was 20, so I had already put in a fair amount of time writing in the performing arts. Making them into film—it wasn’t so difficult for me to do. I never thought of myself as a film composer at all until that moment. And then after Koyaanisqatsi, Errol Morris came along, we did The Thin Blue Line. By the way, I’m the guy that introduced them to each other. They are very different, but they talk to each other, they come and see each other’s movies. I had these two guys who were friends of mine; they became friends very quickly, Errol and Godfrey, and then I introduced them. They were both reinventing the whole genre, and I just happened to be in the kitchen.

The Dissolve: They’re both, Reggio perhaps a little more nakedly than Morris, interested in philosophy and questions of ontology.

Glass: Absolutely. They are not peas in a pod, but they are working on the same ideas.

The Dissolve: Over the 35 years you’ve been scoring movies, how has your role in the process changed?

Glass: Fundamentally, it hasn’t changed. Partly because Godfrey has the ability to enter into collaborative work in a very open and generous way. And because of that, he can combine that with his own idealism and his stamina—mental stamina, if not physical stamina, because as he gets old, he slows down a little bit—but his complete dedication to his work. It’s been easy. And also, we’ve never stopped seeing each other. The biggest problem with the movies was, it took 10 years to raise some money for them, each one. At this point, he’s actually made fewer movies than the guy who did Citizen Kane.

Glass: Orson Welles, and for the same reason. Orson Welles couldn’t get the money. And you’re like, “Wait, he couldn’t get the money? How could that be?” And now people say that about Godfrey, like, “What do you mean? You can’t get the money? How can that be?” Because we are working in an industry that is shackled to the marketplace, and that’s what it is. You can complain about it, you can applaud it, it doesn’t matter: It’s the reality. So between movies, he would come to see me. He used to stay with me in New York for many years. We were never out of touch. He was never without a project. It just always took a long time to raise the money. Early on with the new projects, I would be invited to meet the people; he wanted them to know I would be involved in it. So it’s been a continuous friendship and relationship.

The Dissolve: You mentioned at the première that Visitors and the previous films grew out of conversations you and others have with Godfrey Reggio. What are those conversations like?

Glass: Well, that’s not quite fair. Actually, he talks and I listen—that’s the conversation. Now, he needs a listener—he doesn’t do well talking at a wall—and I often have been the listener, and it has kept me alert and aware to the nuances of his thinking. But he went into ideas about society and technology and nature, which I wasn’t particularly connected to. I was connected to social issues, and I did that in operas like Satyagraha, or particularly Akhnaten. I would say the first three [movies] were very socially oriented. So that wasn’t foreign to me. I wasn’t writing in a glass cage of some kind; I was working in the real world, too. But he was very actively seeking out writers and people who would help him with his thoughts. I empathized with that. I was not a leader in his thinking, but I benefited from it and participated in it, with full awareness and knowledge of what he was doing.

The Dissolve: With Visitors, when did you first start to listen to the early ideas?

Glass: The early ideas were quite a bit different. You have to remember, this took 10 years. We began talking about a film about humor. And he focused it on people, that it would be people who would represent that. And from that, very slowly over those years, it shifted to the idea of the gorilla. And once the gorilla was there, the whole thing changed, because of the reciprocal gaze. They said last night, you probably remember, that human beings don’t know who they are until someone who is not a human being looks at them, and that was the gorilla.

The reciprocal gaze is something that came up through those 10 years of conversations, which were really 10 years of thinking out loud. From the gorilla, it began to focus on the role of the spectator. And then we got into a very interesting idea that the film is really about looking at the film. Now in a way, I would say all the films have been that. In those films, Koyaanisqatsi and so on, there is a lot of talk about technology and society. But from another point of view, it’s just actually about how we see movies.

Now with this movie, the big breakthrough is, we’ve gotten down to actually what the movies are about: The movies are about seeing the movies. That’s very clear to me now. Don’t forget, I’m playing these other movies all the time. We do Koyaanisqatsi every year a number of times, and we do all the movies live. I do it with my ensemble, sometimes with an orchestra, so these movies have never been very far from me. I play them every year. But when I look back at Koyaanisqatsi now, I can see it from the point of view of Visitors. I say, “Oh! He’s always been interested in that.” But what’s happened now is, he’s taken away all the covering—I wouldn’t say distractions, that would be going too far—but I would say that the real subject matter was really something else about how we look at movies. Now we’re getting to an interesting thing, once we start thinking about that. Then the role of the music takes on a completely different role. So the question is, how does music function in this?

I’ll give you an example. What we call the middle movement is mostly people, images of people, large groups of people and so forth. That music, if you listen to it, is the most abstract. Then we go to the swamp, and that music is the most romantic. That seems backward, doesn’t it? Why wouldn’t you put the romantic music with the people, and the abstract music with the swamp? But no. I didn’t know I was going to do it that way, but looking at it last night, what I saw in what I had done was that I had switched it around. By doing that, the relationship to the people becomes, not troubling and problematic—it becomes unexpected. Looking at the swamp from the point of view of the human heart, it is, again, not troubling and problematic; it’s unexpected. It’s that unexpected relationship which I think accounts for the degree of attention that we bring to the exercise of viewing. You can follow it that way. That’s what the spectator is doing, what his function is, exercising his ability to view. 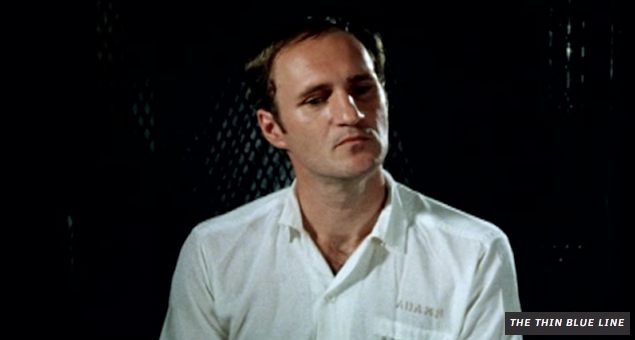 The Dissolve: Your score for The Thin Blue Line has been one of the most influential piece of film music of the last 30 years. Errol Morris’ shorthand for the effect is “existential dread,” which is not something documentaries typically evoke. Was that a breakthrough score for you as well, in terms of your relationship to the form?

Glass: At the time, it didn’t seem that way to me. Looking back, I can see it that way now. But often when we’re in the midst of something—I mean, this is something: Last night I saw the film and I understood another aspect of it. I mean, I understood things last night that I had never seen before, that actually what the music is doing is gathering the attention of the viewer. Then in the same way, I immediately thought, what the images are doing is gathering the attention of the viewer so we can listen to the music. They both work. Sometimes these things work out later, like with The Thin Blue Line. I work very intuitively. Then later on, I work very synthetically. Then later on, I will think analytically. I tend not to mix the analytic process with the synthesizing process. Synthesizing is the creative process; analysis is the understanding part. So I tend not to do them at the same time. Most of the analytic understanding comes up afterward. So I’m always a little behind my own process.

The Dissolve: You mentioned playing the Qatsi scores live several times a year. Are those the ones you play most?

Glass: The most popular pieces are [Jean Cocteau’s] La Belle Et La Bête and the Dracula score. There are at this point seven or eight films which are extremely popular and were made for larger audiences. They are not made for conservatory audiences, new-music audiences. Good Lord God help us. When I’m out playing with my ensemble, more than half the time we are working with movies. We still have what we call retrospective concerts, we still do that, but I would say we do much more live music for film. And these are not historic black-and-white movies from the 1930s, except for Dracula. These are new movies. We are combining live music with new film. That’s a huge difference. We’re not taking Metropolis and writing a new score. We’re not doing that. This is different.