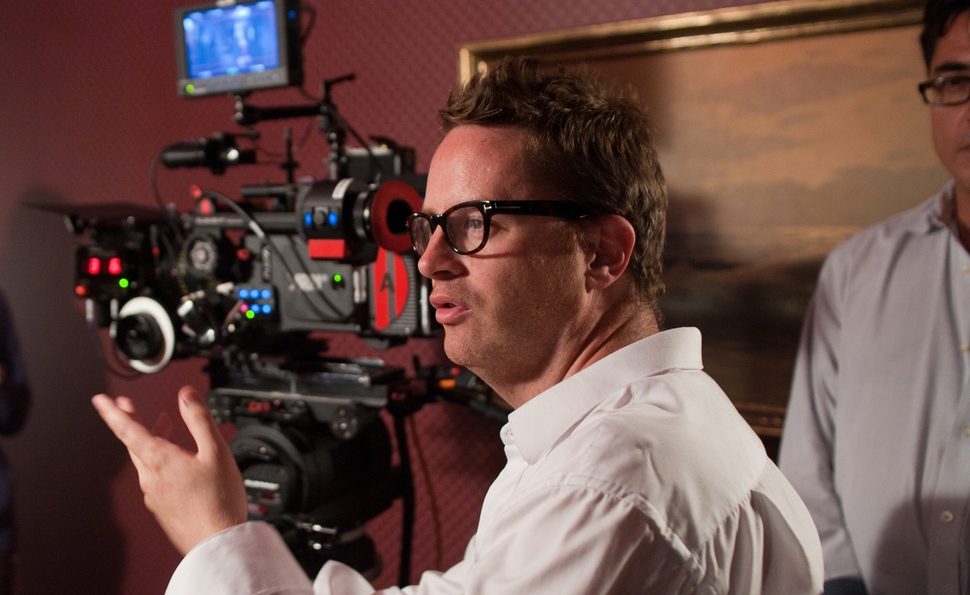 With the ultra-violent Only God Forgives, director Nicolas Winding Refn felt the need to exorcise some desires

Danish director Nicolas Winding Refn was born into a filmmaking family. His mother, Vibeke Winding, is a cinematographer, and his father, director/editor Anders Refn, happened to be cutting Lars von Trier’s Breaking The Waves while his son was editing 1996’s Pusher, the first in what became a trilogy about the Copenhagen drug scene. (The other two, 2004’s Pusher II: With Blood On My Hands and 2005’s Pusher III: I’m The Angel Of Death, were produced in part to dig Refn out of the financial hole created by his 2003 fiasco Fear X.) After winning acclaim with his two-fisted 2008 biopic Bronson, about a prisoner so exuberantly violent, he spent 30 years in solitary confinement, Refn broke out with two spare, minimalist genre films that have divided critics and audiences sharply. The six-part 2009 Viking saga Valhalla Rising starred Mads Mikkelsen as a one-eyed warrior on a bloody journey to the Holy Land, and 2011’s Drive, Refn’s first collaboration with Ryan Gosling, won him Best Director at Cannes for his stylish look at a Hollywood stuntman and getaway driver who gets in over his head.

For his new Only God Forgives, Refn again casts Gosling, this time as an American named Julian who runs a boxing club in Bangkok as a front for a drug-smuggling operation. After his older brother gets killed in retaliation for raping and murdering a 16-year-old, Julian opts not to take revenge, lest he interfere in the street justice enforced by Chang (Vithaya Pansringarm), a figure of terrifying power. But when his vicious mother Crystal, played as a brassy horror by Kristin Scott Thomas, arrives for the funeral, she pushes Julian into action. With the film again drawing a polarizing reaction at Cannes and abroad, Refn talked to The Dissolve about the value of silence, following his instincts, and the threat of a culture where good taste has become law.

The Dissolve: Movies like the Pusher trilogy and Bronson featured a lot of hyper-verbal characters, but your last three movies—Valhalla Rising, Drive, and now Only God Forgives—have cut away a lot of talk, especially from the lead character. Is there a reason for that shift?

Nicolas Winding Refn: Not intently. But now that you ask, maybe it has to do with getting older. [Laughs.] You become more observant of the world, and less verbal about it. At least I do, maybe. I think I maybe used to talk a lot more than I usually do, so subconsciously, that may be the answer to that question.

The Dissolve: Does it become an opportunity to do more with the camera?

Refn: For sure. Absolutely. There’s no doubt that the minute the spoken word is eliminated, the camera becomes a much stronger device in storytelling, and there’s a great pleasure in that. Maybe it’s me having done films where people did talk a lot. You sometimes try something completely different, to see what it’s like with just silence.

The Dissolve: Do you cut away dialogue as you refine in the screenwriting process?

Refn: Yes. It usually starts off with a lot of talking that then is slowly deleted as the process goes on and on and on, to the point where when I start making the film, there’s not a lot left, and then usually whatever is left is taken out. A movie like Valhalla Rising was designed silently, so it was approached like that. Drive became very silent, and so did Only God Forgives.

The Dissolve: Is there a lot of detail in the script about how you intend to actually shoot these scenes without language?

Refn: No, because I’m very bad at describing that. [Laughs.] So I probably should do more than I do, but I just haven’t been able. It’s just the fact that it’s more describing a sense of feel and what the camera observes and how it takes in the emotion, and less about the details of what happens. 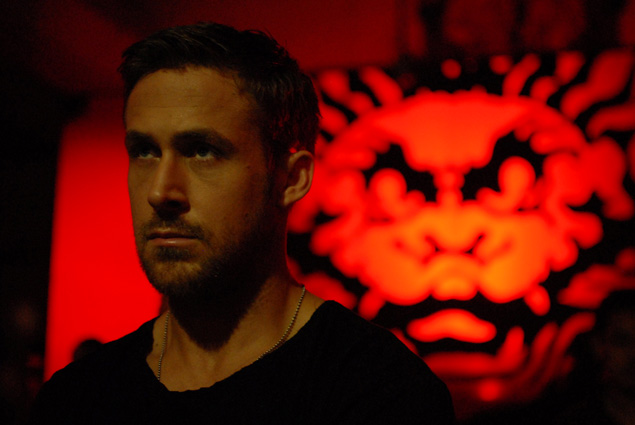 The Dissolve: What does Julian’s silence in Only God Forgives tell us about who he is?

Refn: Well, he’s a man trapped between heaven and hell. He’s chained to the womb of his mother. And because the film is set in a heightened reality, silence becomes part of the language of the film in a way that’s much more accepted than if it had been a film rooted in a more authentic reality, because then we would question it in a different kind of way. But the idea of a man who’s basically under his mother’s spell automatically takes away his voice in the sense that he becomes under her control. He’s like the sleepwalker in The Cabinet Of Dr. Caligari—the idea that he’s purely under her influence and her wants and needs, and whenever he slightly tries to verbally rebel against her, she demolishes him. Essentially, he is pure obedience.

The Dissolve: How much time had you spent in Bangkok prior to making this movie, and what impression did the city make on you?

Refn: Well, I had been there a few times on normal holidays, on vacation. And I always liked the city a lot, so I really liked coming there. You could say Bangkok is very much a gateway between the West and the East. It’s like a version of the Berlin Wall. By day, Bangkok is very loud and almost like Disneyland. And at night, it becomes very mystical and almost superstitious. And it was the night part that I became very interested in wanting to make a movie about.

The Dissolve: One of the striking things about the movie is how you’re able to achieve the lighting effects of film noir using very vivid colors.

Refn: There was a movie that made a huge impression on me when I was young, in my teens. It’s a short film called “The Evil Cameraman” by Richard Kern. [“The Evil Cameraman” is a sadomasochistic experimental film featuring Kern and three women, and set to an industrial soundtrack. —ed.] That certainly imprinted on my brain. I don’t really plan a lot. I just go find what I like to see, and then place the actors within that environment, and then photograph it the way it allows me. [Only God Forgives] looks like a pinup magazine.

The Dissolve: The film is extremely violent, with some of that violence onscreen and some offscreen. Do you have a guiding philosophy in terms of what to show and what not to show?

Refn: No, not really. I try to not to think too much about what I do, because I may end up not liking it.

The Dissolve: How do you mean?

Refn: Well, art can be a way to exorcise your fetish and desires, both the good ones and the bad ones.

The Dissolve: You’re more just following your instincts, and not overthinking it? Is that the idea?

Refn: Right. It’s about what arouses you, which can both be unpleasant and yet very seductive.

The Dissolve: The decisions Julian makes in Only God Forgives could be construed as either moral or practical. You could say that he doesn’t pursue revenge for his brother’s death because what his brother did was terrible, but also because it would yield a likely fatal result for him and his family. Where do you stand on that? Do you think about Only God Forgives as a moral journey?

Refn: Part of the story is really a moral dilemma for the Julian character, and when he tries to justify his decision, his mother takes over. And in that process, she’s able to push him toward a revenge scenario. But because the man he essentially has to avenge is a godlike character, he can never touch him. And when they finally fight, and Julian loses, it is like a catharsis. In a way, he comes back to the womb of his mother, where the mother then is able to seduce him into accepting that he has to kill. You know, an eye for an eye. The film is very much designed like certain stages of a mother-and-son relationship, seen from different perspectives. 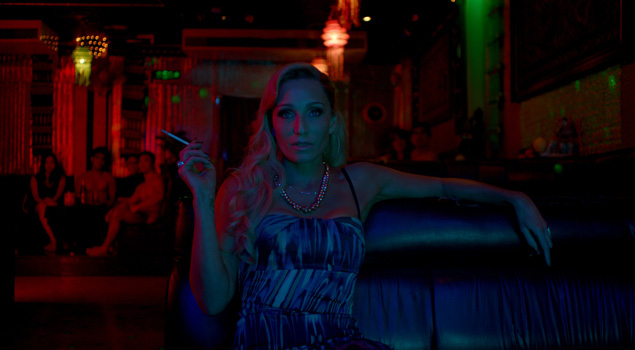 The Dissolve: How did you think to cast Kristin Scott Thomas? Was this a case like Albert Brooks in Drive, where you were casting against type?

Refn: Well, in reality, there were not a lot of actresses that had all the essentials—the age, the sexuality, the talent, the look, the feel, the need, the willingness to do something like this. So the list was very short. [Laughs.] And I was very lucky that she found her way into the film.

The Dissolve: She tends to be associated with roles that are much more genteel. Was she at all reluctant to deliver some of the lines you had written for her?

Refn: No, no. I think she very much relished in it. In a way, she is the definition of an actress, in that it’s a craft, and for them, it’s a machinery that has to move. It was a very, very pleasant experience working with her, and I really, really enjoyed it.

The Dissolve: What was your collaboration with Ryan Gosling like here? You described him as a close collaborator on Drive, particularly in giving you a sense of Los Angeles. What did he add to this movie?

Refn: Ryan would play Julian completely opposite from all the obvious choices. Each actor would’ve interpreted Julian in a different way, because so much of the part is left to the actor’s imagination. So, a lot. I like to involve the performers as much as possible in the actual construction of the film. Every morning, I would be like, “Where do you see yourself moving toward, and what would you like to do today?” And then working with that, encourage that kind of openness.

The Dissolve: How do you feel when the reaction to a film is negative or difficult? Is that something you’re able to reconcile easily?

Refn: I always say it like this: In reality, nobody likes to be criticized. It’s not a comfortable situation. But at the same time, you also seek it out. I always believe that polarization is essentially the definition of penetration into an audience. If people love or hate you for the exact same reason, it meant that you have gone deeper than just everyone liking it or everyone hating it. We live in a society where good taste has become law, and I believe that’s the enemy of creativity.

The Dissolve: Does that affect you as a moviegoer as well? Do you become bored with certain types of movies?

Refn: I think it’s something cinema is really struggling with at the moment, generally throughout the world. Television has gotten much more aggressive, and much more mind-expanding and progressive than cinema, which is still the crown jewel, and will always be the crown jewel. We need to remember that cinema is not just about, “How much money did you make on Friday to Monday?” but also, “What is your actual interest?” Filmmaking is an art form, and the art can inspire. But if everyone’s afraid of standing out and risking polarization, which essentially means it’s a singular vision, then the world will become less interesting.