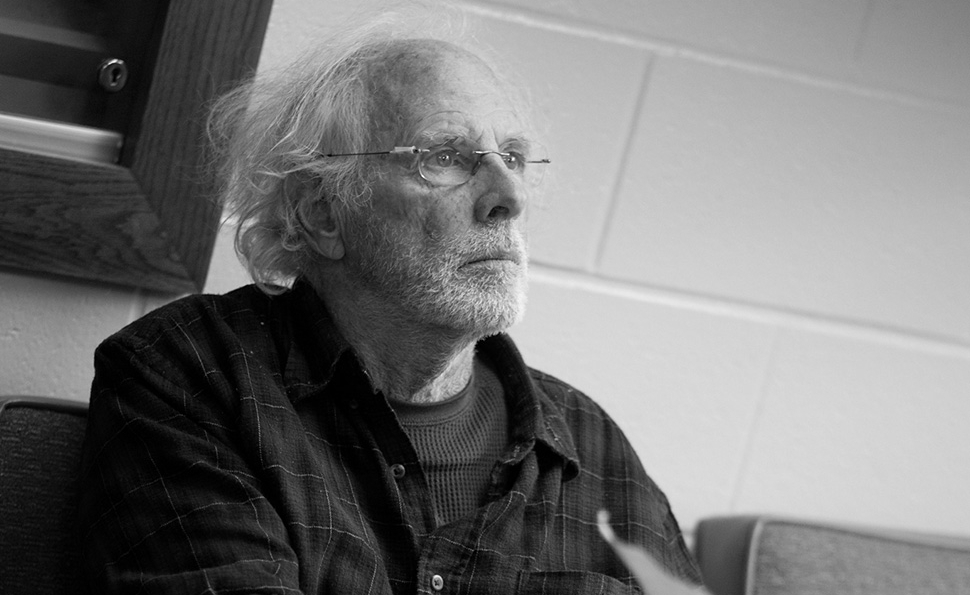 Bruce Dern on the challenges of Nebraska

Bruce Dern attended an Ivy League college and had Adlai Stevenson and Eleanor Roosevelt as his godparents, but despite his prestigious background, he found a fruitful niche playing renegades: villains, bikers, cops, gunmen, and drifters living on the fringes of society. Dern worked extensively in television in the 1960s, but really made his mark in the New Hollywood of the late 1960s and 1970s. He became an unlikely movie star in an era hospitable to leading men with character-actor charisma and intensity. After studying at the Actors Studio with the likes of Lee Strasberg and Elia Kazan, Dern did his time in the Roger Corman stable, appearing in counterculture-friendly B-movies like The Wild Angels and The Trip. In 1972, he delivered one of his most memorable performances in the science-fiction classic Silent Running; in 1974, he stole Jack Clayton’s otherwise moribund adaptation of F. Scott Fitzgerald’s The Great Gatsby with a mesmerizing turn as Tom Buchanan. And in 1978, he was nominated for a Best Supporting Actor Oscar for Coming Home.

After that, he turned up frequently in supporting roles in memorable fare like 1989’s The ’Burbs; 1990’s After Dark, My Sweet; and 2005’s underrated, overlooked ’70s-style character study Down In The Valley. But after decades of stellar work in supporting roles, Dern scored a rare lead turn in Alexander Payne’s wonderful new road movie Nebraska, which casts him as Woody Grant, a senile, easily confused alcoholic who thinks he’s won a fortune in the lottery. After a series of failed attempts to pick up his supposed bounty, he hits the road with his patient, long-suffering son David (Saturday Night Live’s Will Forte, in a revelatory dramatic turn). Dern is famous for his motor-mouthed intensity, but in Nebraska, he delivers an uncharacteristically restrained, subtle performance as a man of few words.

The Dissolve: How did you get involved with Nebraska?

Bruce Dern: Just about 10 years ago next month, they sent me the script, and I read it and got all excited. I went to Toys ‘R’ Us the next morning, sent Alexander [Payne] a truck to his office, saying, “I think I know who Woody is. And I am Woody.” Didn’t hear anything back, really. Then, next thing I know, he’s shooting Sideways. He said he hadn’t been able to get it made. He didn’t tell me that, but… Then he geared up again and couldn’t get it made, mainly because [producers] weren’t thrilled about black-and-white, which was a much bigger issue even than me. So, the next thing I know, he’s doing The Descendants. I think, “Well fuck, it’s over. It’s never gonna happen.” We started shooting one year ago today in Norfolk, Nebraska, which is about 200 miles north of Omaha.

A year ago last April, Payne called me into his office—May 1st, actually—and he said, “I want to give myself a compliment.” And I said, “What’s that?” He said, “When I first got the script—’cause he didn’t write it; Bob Nelson wrote it as a script, and he’s from Hartington, Nebraska, population 1,502, so he knows little towns—I had you in mind. Then I saw every guy over 70 on Earth.” So he said, “I want you to do my movie.” And I was thrilled. He said, “We’re shooting in October, and I’ll call the studio Monday. This was on a Friday. The problem is, tomorrow afternoon I have to meet one more person.” And I knew, shit, it’d be [Gene] Hackman or somebody. Alexander’s prototype for the movie was Henry Fonda from The Grapes Of Wrath, only as a 75-, 80-year-old man. And [Payne] called me Saturday night about 5 o’clock and he said, “You’re it.” And you know who the other guy was? [Director] Carroll Ballard. He did The Black Stallion. I guess he’s about my age, and looked a little out to lunch, like I do.

“If you think I’m gonna retire so Jimmy Caan can get a fucking part from me, you’re wrong.”

We went, we started, and the first day of work, he came up to me and he said, “This is Phedon Papamichael. He’s your cinematographer. And I’m your director. I wonder if you might do something for us—I’m not sure you’ve ever done throughout a film, throughout a whole film in your entire career.” I said, “What would that be? We’re already an hour from shooting me at 8:30 in the morning.” He said, “Let us do our jobs.” And I said, “Meaning?” He said, “Meaning that your ability when people turn the switch on you is about as quick and unique as it gets. You suddenly are what we’re looking for. What I want you to do for Phedon and I is: I don’t want you to show us anything. Let us find it.” When somebody says that to you, it almost puts tears in my eyes. You almost want to hug him, because you know you have a partner.

Lee Strasberg and Elia Kazan both said to me many times, “Nobody’s gonna appreciate you until you’re in your late 60s.” I said, “Why is that?” They said, “’Cause you’re not a conventional leading man. You don’t look that way. You don’t have anything right.” And this was in 1959. It would be 12 years after that before the industry would take guys like Jack [Nicholson], or Dustin [Hoffman], or myself, or whoever is in our age group, and say, “Well, let’s make movies about people on the edge, people who are different, people we’d like to know about. What makes them tick?” I was lucky I was there, as the ’70s came in.

In the documentary A Decade Under The Influence [about the New Hollywood of the late 1960s and 1970s], I’m one of the four main actors. It’s hard for me to brag about the movie, because Ted Demme, Jonathan Demme’s nephew, directed it, and he died about a month after we finished doing it, and Richard LaGravenese had to finish it and got it out. The reason I get a little tough about it is because where’s Hal [Ashby]? Where’s Bob Fosse? I mean, what did they do in the ’70s between the two of them? They did 15 pretty goddamn good movies.

One thing Hal did that was neat—he wasn’t supposed to be the original director of Coming Home. Jerry Hellman, the producer; Waldo Salt, the writer; and John Schlesinger had done two movies together, and this was their third—the first was Midnight Cowboy and the second was The Day Of The Locust. So Waldo wrote the script for Coming Home, but a month before they started shooting, he goes in an oxygen tent and never really came out—so no contribution from him. They were left with the script that wasn’t quite what they wanted, and somehow, Schlesinger was out of the process, of his own doing. I was told he wasn’t sure he knew how to make the movie they wanted to make. He was interested in broken bones, not the wounds up in the head. He was interested in what you could physically see. That wasn’t what the movie was. But shit, if you lose John Schlesinger, you lose a lot. So Hal came in immediately, and between the 7th of January 1977 and the 28th of July, Hal Ashby, back-to-back, made two movies: Coming Home and Being There. With no pre-production on either. And we’re not going to talk about him a lot in [A Decade Under The Influence]?

But the one thing I love is, the last guy to talk about actors [in Decade] is me, and the director says to me, “What are you going to do when you retire?” I said, “Retire? What generation are we talking about? We are the most competitive generation of men and women in the history of this business. If you think I’m gonna retire so Jimmy Caan can get a fucking part from me, you’re wrong.” Then Marty Scorsese comes out, and he says, “I’m absolutely blown away by the movies that they make today. I wouldn’t know how to make one. I couldn’t make one. I’m blown away by the wizardry, the technology, and the propensity to make money fast.” How can you make a movie that makes $100 million in three days? What is that? He says, “Despite all of that, at the end of the day, I miss the people. Those are the movies I make.” That’s what Hal did, that’s what Fosse did, that’s what Marty does. Except Hugo, I wasn’t quite sure what that was.

The Dissolve: You said your Nebraska character was you. What do you mean by that?

Dern: A little detached. A great deal out there, a dreamer. Above all, if there’s one ingredient—you could say the biggest positive about Woody is, he’s a fair man. Whatever’s left, he’s fair. He expects of other folks that they’re fair, and that they’re going to tell him the truth, and that everything is what they say it is. When it isn’t so, he doesn’t second-guess it, he just moves on. He doesn’t look at what that was, or examine anything, he’s not trying to get to tomorrow. He will get to tomorrow, and that’s what the movie is about. That’s what is so fabulous to me—and I’m bragging ’cause I’m in it—the wizardry of Alexander and Bob Nelson. It’s not a book; this is just a script. I’m not really sure what Alexander did that Bob didn’t do, but he does his thing, Alexander—he goes in and does stuff. 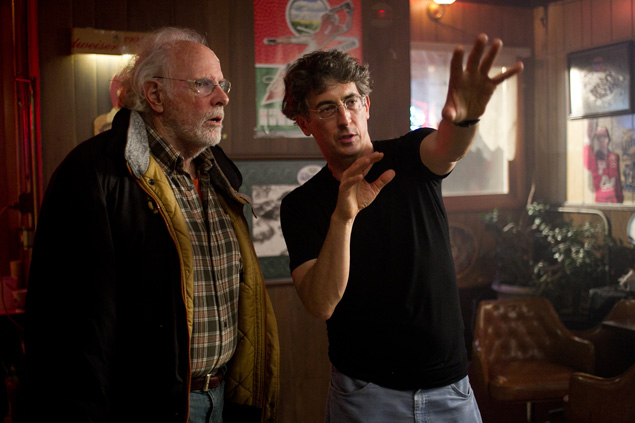 The understatement ability of Alexander Payne is what you dream about every day when you work. Why was black-and-white so important? Out here, you get an hour beyond Wheaton [Illinois], and that’s what it is. It’s black-and-white. The neat thing about it is, the Woody kind of people, they don’t leave. They stay there decade after decade. Because deep down, their grandparents homesteaded that place, and even though now they work for big combines that own their farms, in a way, they’re just tenants on their own property to international harvesters, or whoever buys these places up.

The neatest thing about Alexander… I’ve always judged directors by, “How close to being excited about going to work every day are you?” I got that with Mr. Kazan when I began. I was excited. The reason I’m the excited with Hitch [Alfred Hitchcock] or Alexander—but Alexander just as much as everyone: Every day, you go to work thinking maybe you have a chance to do something that’s never been done. And that’s the magic of Alexander. And his approachability—especially for actors, but anybody on the crew. The first day, he said, “Bruce, what do you see?” I say, “I see everybody the first morning pulling their oar. How do you get that?” He said, “Well, we have 82 people on the crew, and 41 have worked every day on every film I’ve ever made.” So you’ve got a family.  So you dared to risk, but not only dared to risk—you had to risk. Because you can’t let those people down. I can’t act around that. I can’t perform around that. I have to be Woody.