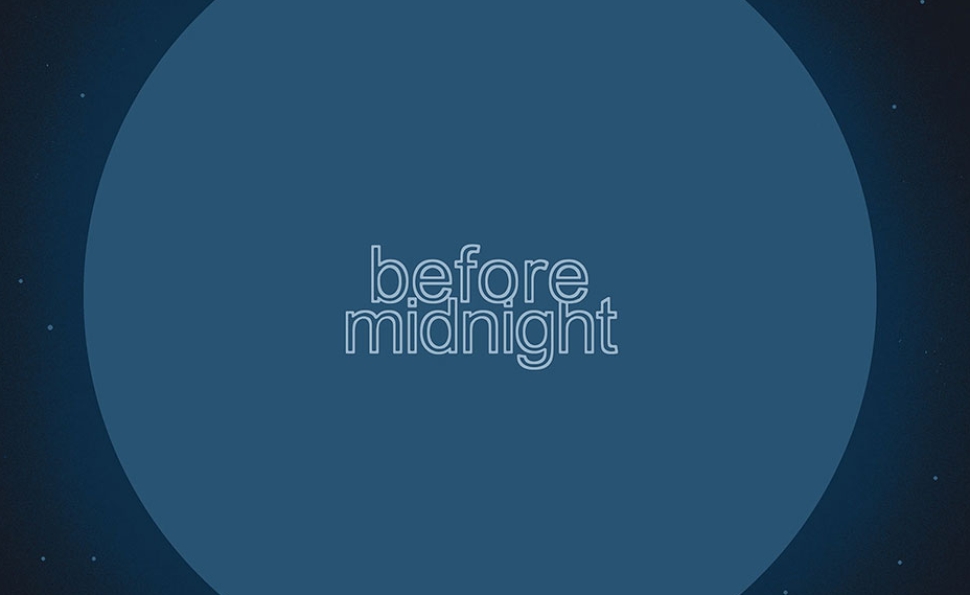 In a poster created for The Dissolve, Before Midnight inspires some circular thinking 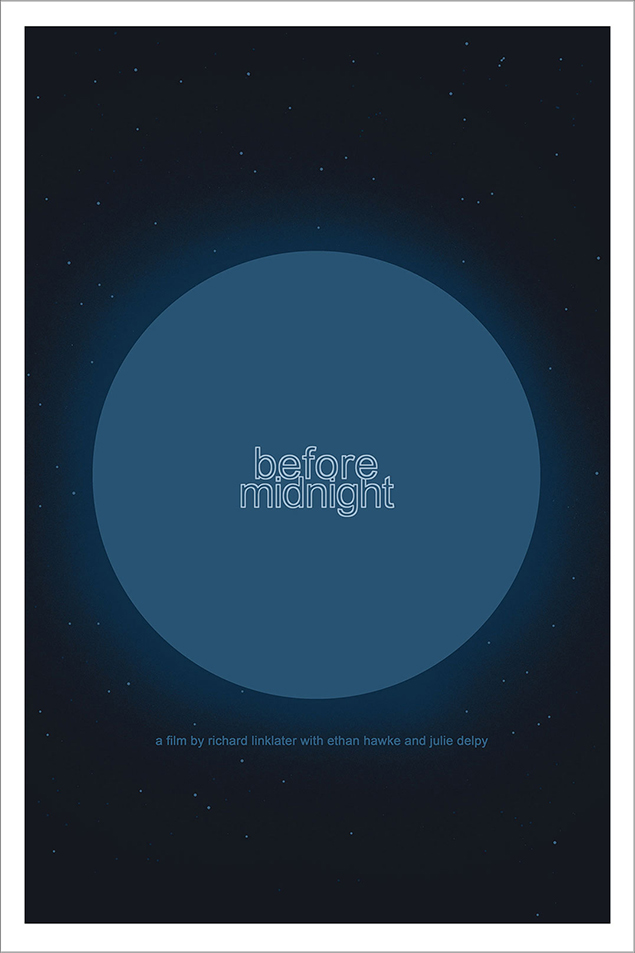 For the past few years, I’ve been designing film posters. It’s been a way for me to combine my love for film with my passion for graphic design and its history. In this monthly column, I’ll present an original, exclusive poster design to The Dissolve’s readers, and share some of my inspirations from various traditions of film-poster art and graphic design. It’s an exploration not just of my personal poster-design process, but of the trains of thought that connect visual information.

The halfway point of the year is a perfect time to start this feature, as critics and fans reflect on their favorite films of the year so far. Before Midnight is mine. Saying I’m a fan of Richard Linklater’s film trilogy would be a huge understatement. Before Sunrise and Before Sunset inspired me to come up with some of my first poster designs a few years ago. They’re the rare designs that I look back on and still feel pretty good about, and I made silkscreen prints of them just this year. Linklater And Co. surprised us all when, just a few months ago, they leaked that a third film was not only in the can, but premièring at Sundance. Could I, should I, and would I come up with a third poster design that would complement and do justice to the first two posters, and to the film itself?

My first two designs paired perfectly; they were intended to work as symmetrical inversions of each other. (Literally, I designed one poster and flipped it upside down to make the other.) I didn’t consider at the time that a third film, or poster, would be on the way. To imagine a third poster, I had to think of it not as a third wheel, but as a herald of many more to come. (If I were a betting man, I’d bet that Linklater, Hawke, and Delpy keep making these films until they can’t anymore.) Looking at the third design this way, and imagining many other variations of the same colors and shapes, freed me up from adhering strictly to the rules of the first two designs. Specifically, the torn-paper horizon line could go, along with the effect the horizon line had on the sun. In fact, the sun wouldn’t even be a sun anymore. It would be a dark moon, and it would sit in the center of the frame in a way that balanced against the other two.

But the white areas of the first two designs were visual representations of the time remaining for the characters in each film—before sunrise, and before sunset. One of the many ways Before Midnight breaks from its predecessors is that there isn’t the same urgency regarding a certain deadline for Jesse and Celine. (I particularly liked Adam Kempenaar’s take that the title is more of an ironic play on a certain fairy-tale paradigm.) All frilly symbolism—tidy ways of understanding our lives and loves—out the door. All is ambiguous, all is dark. This poster design, I told myself, would have to honor the ambiguity and darkness of life, and of Before Midnight. 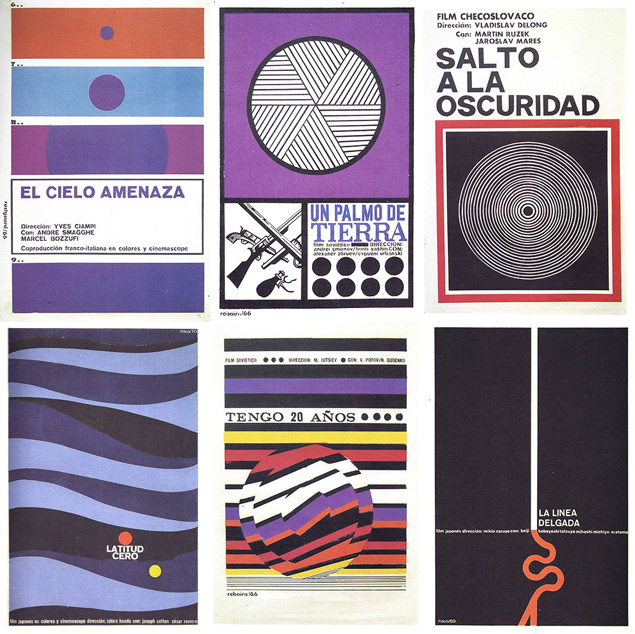 I’ve always been attracted to designs composed of simple shapes and colors, and nowhere is this more common in the history of movie posters than in Cuban poster design of the 1960s and 1970s. The pieces above, published for the first time in the excellent recent book Soy Cuba, employ solid fields of color and simple, geometric shapes to convey something about the plot or themes of their subject. Produced as silkscreen prints, the color fields were solid and flat, a style that appeals to me more now than ever in an age of overused textures. While I’ve always enjoyed designing posters, it was a book of Cuban poster art that inspired me to pursue a career in movie-poster design. These posters have been a huge influence on my style, teaching me that a design can be minimal and iconic if done thoughtfully and intentionally. I particularly love the style of Antonio Pérez Ñiko, who found creative ways to use simple shapes and colors in depicting the Japanese-American science-fiction adventure Latitude Zero and Mikio Naruse’s The Stranger Within A Woman (translated for this Spanish release as The Thin Line, and not to be confused with Malick, although Ñiko’s line is red). It’s fun to discover obscure films through these posters; I’d never heard of the Australian thriller Plunge Into Darkness, or Skies Above, a French sorta-science-fiction film advertising Mirage aircrafts and the Clemenceau carrier, boasting protection from alien (nuclear) threats. 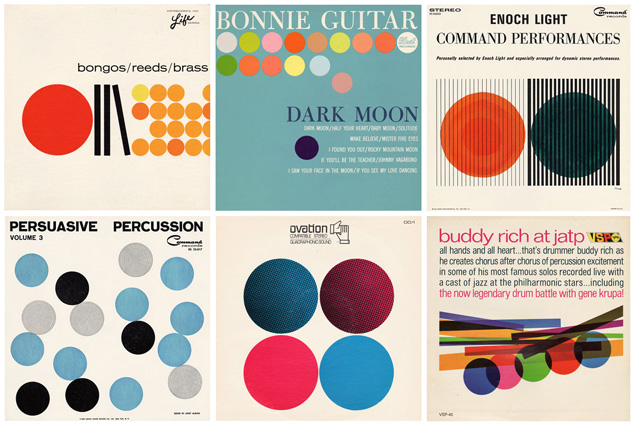 While I’ll try to focus mostly on movie-poster design in this column, I’ve always loved film for being a gateway into other things, and it’s inevitable that other, non-film-related design trends may enter the picture as I explore some interconnected inspirations. In this case, I’ve got circles on the brain. These modern-jazz, instrumental, and quadrophonic LP covers see colorful shapes interacting playfully in dynamic compositions, and are representative of some of the most influential and pervasive design trends of the modern era. They don’t have the job of representing a film narrative like the Cuban posters do, but they offer a surface pleasure and playfulness that has certainly been influential to my personal aesthetic. See more of them at the Jive Time Records’ beautifully curated blog Project Thirty-Three, which is searchable not just by designer, but by specific shapes.

Sitting above my desk, I keep a vintage copy of The Moon Seems To Change, a “Let’s-Read-And-Find-Out” book from 1960, beautifully illustrated by Helen Borten. It’s a keystone of my inspiration. I remember flipping through it as a child, then cutting pages from it to design my band’s first cassette tape in ninth grade (which the collector in me regrets, but will let slide). And only now do I see how influential these illustrations were to me, specifically to the Before Sunrise and Before Sunset designs, which clearly paid homage to Borten’s circles and horizon lines, however subconsciously. It’s a piece of modern design that made a permanent impression on my visual imagination. Ever since then, I’ve been drawn to the circle. It’s become a go-to visual trope that I try to use sparingly, so as to not become repetitive. Yet so far, I’ve found it an endless source of inspiration, and it has offered fitting solutions for several projects (screenprint designs for Stalker and Melancholia, some photographic comps for the Shoah cover for The Criterion Collection, the theatrical poster for Rainer Werner Fassbinder’s science-fiction television opus World On A Wire that I designed for Janus Films). The Before trilogy, I always thought, would be a perfect subject for some circular thinking. There’s something about the circle as a symbol; it can represent so many things, and into it, we can project and imagine so many feelings and other worlds. If the circle ends up a signature of my style, so be it.

Sam’s Before Sunrise, Before Sunset, and Before Midnight prints are available here.