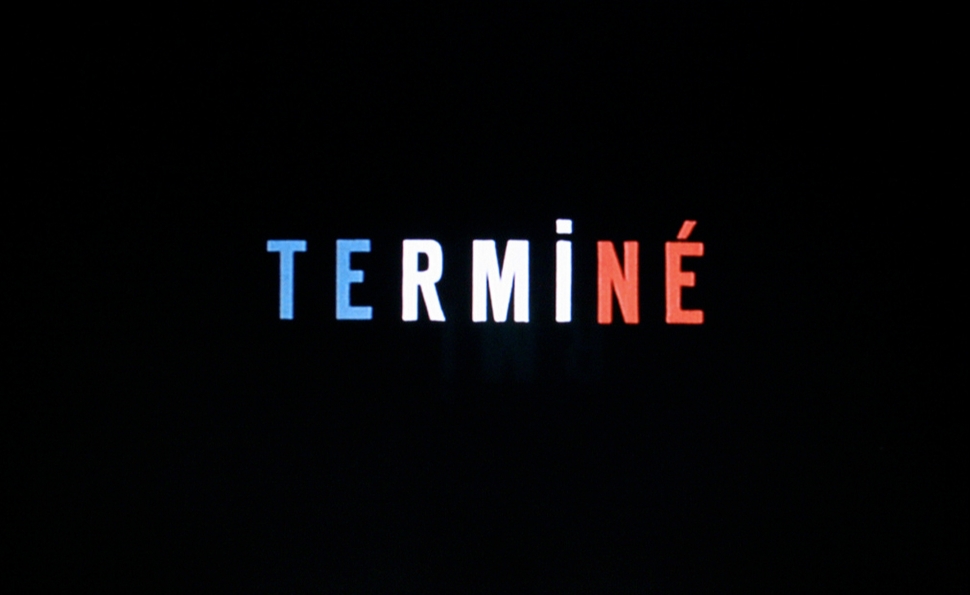 There’s more than one way to understand a film. This is what I like to tell myself when confronted with challenging cinema, and what I assure others who gripe about not “getting” certain movies: that visuals, editing, and other aesthetic matters are often more meaningful than dialogue and story. I’m a believer in the cliché that film can be a universal language, that the basic act of engaging with cinema has been the same since the silent era, when, as Norma Desmond famously put it, “we didn’t need dialogue—we had faces.” These are the elements of filmmaking that remain constant across international boundaries, and that, I believe, let the medium become such a universal source of awe.

Last October, I unwittingly became a guinea pig in this theory. I participated in the Young Critics Workshop at Film Fest Ghent in Belgium, where most of the festival’s competition films screened with only French and Dutch subtitles, not English. I was the only one of five critics chosen for the workshop with no background in either language, and I did not know ahead of time about the lack of English at the event. As a result, I spent most of the festival feeling like the stereotypical Ugly American abroad: the naïve traveler who’s suddenly shocked to find that not everyone can acquiesce to the English language for his benefit.

My high-school-level Spanish, combined with two days of Duolingo lessons, meant I could get the gist of the French subtitles sometimes—but only when I directed all my attention to comprehending them, ignoring the images, editing, and general mise-en-scène of the films themselves. And even then, I was only getting a twice-translated husk of dialogue that originated in Japanese, Russian, or Mandarin, all subtleties thoroughly erased. Mostly I stumbled through the films, broadly interpreting the thrust of each scene and the motivations of the characters based on the actors’ deliveries of lines I couldn’t understand. I followed the example of the Young Critics Workshop’s patron saint, Jean-Luc Godard, and waved goodbye to language. In the process, I waved hello to a new way of looking at movies.

For some films, this was hardly a problem, as they seemed to weave difficulties with language directly into their DNA. My favorite competition selection, David Lambert’s All Yours, was precisely about failures of communication. The rich, character-based dramedy follows an Argentine male prostitute as he becomes a reluctant live-in partner to a portly baker in a small Belgium town. Lucas (Nahuel Pérez Biscayart) speaks Spanish and English but minimal French, and his struggles with the language become a metaphor for how uncomfortable he feels in his own skin. He uses English when prostituting himself and when negotiating terms with his patron Henry (Jean-Michel Balthazar), but gradually turns to French as he grows in confidence and meets someone he has feelings for. Even without subtitles, it’s possible to perfectly grasp Lucas’ internal dilemmas, to understand how much he understands about himself. Such is the power of a great performance combined with a broadly appealing filmmaking style. 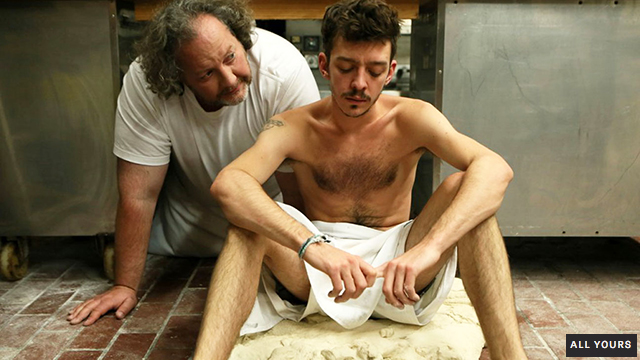 Two other films at the festival were poster children for the aesthetic value of silence: Violet, a Gus Van Sant-like look at teenage grief from writer-director Bas Devos, recently spotlighted in the New Directors/New Films festival; and Lisandro Alonso’s adventure tale Jauja. Violet follows a teen BMX biker (Cesar De Sutter) who has witnessed the murder of his best friend; it screened with no English subtitles, but it didn’t need them. The film relies on prolonged shots of the protagonist riding his bike, attending a concert, staring into space, and trying silently to work through feelings he’s incapable of expressing out loud. Devos draws tremendous meaning from negative space; grief, his film seems to say, is a topic too big for language itself to tackle.

When I interviewed Devos, he told me that of the minimal dialogue in the film, he only considered two lines to have any significant relevance to the story. “I chose not to fill this film with useless dialogue, because I also don’t believe in useful dialogue—the dialogue where people say meaningful things to each other,” he said. “There is so much offscreen to be understood. We don’t see it, but it’s there. It has this natural openness, where sometimes dialogue can close things.” In contrast to Devos’ own theories, the (English-subtitled) dialogue in Jauja, while spare, is useful. It places the protagonist, a Werner Herzogian Danish settler (Viggo Mortensen) pursuing his runaway daughter through the untamed wilds of precolonial Patagonia, in a mysterious, metaphysical context. But the dialogue is all the more effective for its brevity, and for the secondary role it plays to the film’s evocative wilderness imagery and distinctive 4:3 aspect ratio.

In our current age of laptop, mobile, and home viewing, screen size can also factor into our cinematic comprehension. The team at Photogenie, the online film journal that sponsored the workshop, provided subtitled screeners of certain films for me. But they still suggested I try to see all the movies in their big-screen incarnations, where I’d be able to better appreciate their formal qualities. Yi’nan Diao’s Chinese neo-noir Black Coal, Thin Ice was a case study: My flight to Belgium was offering the film, so I watched the first 30 minutes with English subtitles taking up half the tiny screen. Then I turned it off, figuring I’d watch the rest in Ghent. I understood the mechanisms that set up the mystery: the shadowy figure who chops up body parts, feeds them into the coal mine, then repeats the same crime years later, causing an unsolved investigation to reopen. But when I viewed the same opening on the big screen at the festival, without subtitles, I understood so much more that I had missed on the plane, including the broad sight gags and the leads’ detailed, expressive performances. Tiny screens can obscure visual meaning for the sake of convenience—a bargain we should rarely be willing to make.

These are all relatively easy tests for a grand theory about the inherent comprehensibility of cinema. But with dialogue-heavy films, the limits of an aesthetics-only approach become clearer. At Ghent, it was easy to gather when the characters in Andrey Zvyagintsev’s Russian political allegory Leviathan or Naomi Kawase’s Japanese coming-of-age tale Still The Water were mad at each other, when they were being compassionate, and when they had made some kind of emotional breakthrough. But without English subtitles, I couldn’t make heads or tails of what they were doing or why, so I missed key revelations meant to underscore their directors’ theses. And then there was the French-language documentary N: The Madness Of Reason, about a 20th-century researcher who attempted to compile a complete encyclopedia of West Africa. All the film’s considerable visual splendor, when divorced from the accompanying narration and interviews, became completely inscrutable, devoid of any value beyond its own prettiness, and my effort to do something as simple as watch the movie proved its own kind of madness. (Fitting, since the film itself follows an outsider’s futile effort to make sense of a foreign world.) 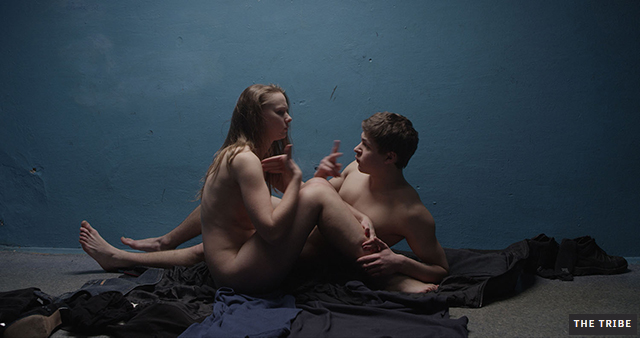 Seeing a film when you are the only person who can’t understand the dialogue is like listening to a song with the vocal track cut out. Still, missing a tool is different from having the builder throw away the toolbox. Miroslav Slaboshpitsky’s The Tribe, which is headed for America, is set at a Ukrainian high school for the deaf, and unfolds entirely in sign language, with no subtitles or voiceovers. A pre-credits warning assures viewers they will not be able to make sense of everything. This is Slaboshpitsky’s game: It’s a crucial part of The Tribe’s cinematic experience that characters speak to each other in ways that aren’t translated to the audience.  The film’s story has broad and bold outlines, and long takes and harrowing explicit imagery fill the gaps that the lack of dialogue creates, meaning we are never completely in the dark. The Tribe hearkens back to the silent era, but its untranslated nuances set it apart from traditional silent films.

Like The Tribe, Godard’s 2014 film Goodbye To Language, recently re-released in American theaters, is incomprehensible by design. But Godard’s intentions are far more extreme.  Goodbye To Language is a collage of brackish sounds and images that run the gamut from amazingly crisp 3-D to shoddy, blurry GoPro footage, with mostly oblique, mostly French dialogue and intentionally obscured subtitles. To read the English, viewers must close one eye, rendering the image itself blurry. Godard forces the audience to choose between visual and linguistic comprehension, and stacks the deck further by ascribing no clear meaning to either. He’s always been a formal deconstructionist; here, he separates the most basic building blocks of cinematic language. He could be instructing viewers to take language more seriously, or perhaps even less seriously.

Casual moviegoers can look at an aesthetically complex yet English-subtitled film like Jauja and see their equivalent of what I experienced with Still The Water: a film where they lack some tool for making sense. Or they could see the equivalent of Goodbye To Language: a movie that seems deliberately and ostentatiously designed to be misunderstood. So instead of a grand theory, perhaps it makes more sense to talk about understanding movies as a sliding scale, where it’s better to accept the things you may not “get” than to insist everything present itself as plainly as possible. After all, the most universal components of cinema are the ones people can’t rely on subtitles to understand.