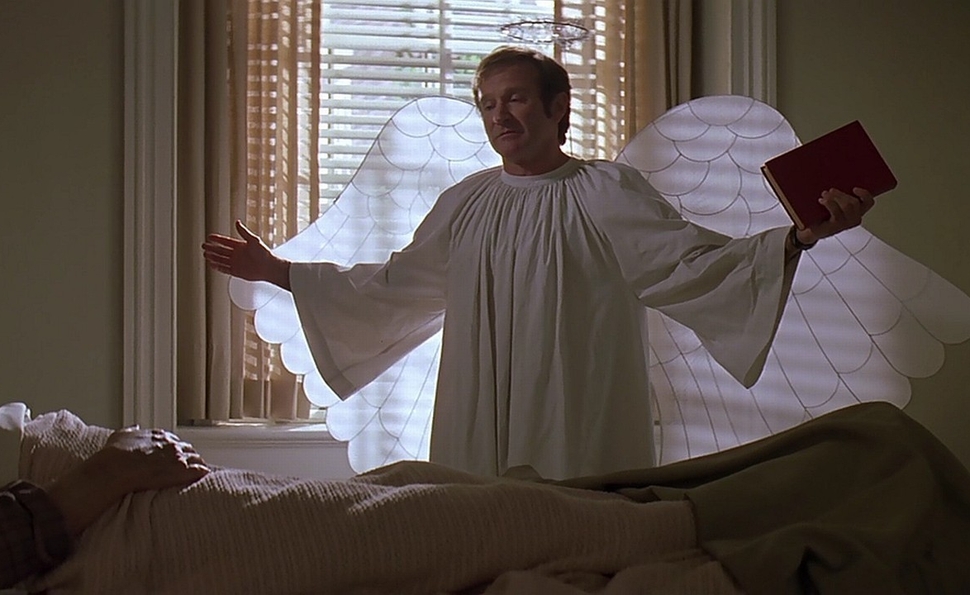 When the news of Robin Williams’ suicide broke in August, my first thought wasn’t about the many blockbusters he made, or his signature roles. I thought about Bobcat Goldthwait’s wonderful 2009 sleeper World’s Greatest Dad, which commented smartly and subversively on a phenomenon Williams’ death quickly unleashed. In World’s Greatest Dad, a tender, restrained Williams plays Lance Clayton, a failed writer and single father whose ambitions to be both a great author and a terrific family man have gone unfulfilled. Lance’s 15-year-old son Kyle (Daryl Sabara) is human garbage, an abusive and bullying creep who kills himself in an act of autoerotic asphyxiation. If you’ve ever doubted Williams’ gifts as a dramatic actor, watch the scene of Lance discovering his son’s corpse, if you can. I’m tearing up just thinking about it.

Lance sees a silver lining to his son’s meaningless death, however, and he pours his grief into composing a fake suicide note for his son that gets published in the school paper, leading Lance to put out more of his own work under his son’s name. In the process, Kyle’s image is rehabilitated to a ridiculous, comical extreme. A jerk no one thought much of is lionized as a soulful exemplar of noble adolescent yearning. Kyle becomes a blank canvas that others can project their own aspirations and fears upon. He stops being a person and becomes a symbol, a saint.

Something similar happens to celebrities when they die, especially under shocking or dramatic circumstances. A benevolent form of cultural amnesia develops over all their flaws. We forget about all the awful films and choices they made. Death washes away their creative sins and amplifies their triumphs.

To a certain extent, this idealization and romanticization of the recently dead, a psychological halo effect, represents a purposeful act of radical simplification. Robin Williams was an extraordinarily complicated man with many different sides. There was the motormouthed cokehead and the man who prized his sobriety, the manic improviser and the Academy Award-winning dramatic actor. There was the Williams who partied with John Belushi just before Belushi overdosed, and the Williams beloved by generations of children as one of them, a great big kid who was always around, in live-action or animated form.

The halo effect reduced all these contrasting versions of Williams to an all-purpose, reassuring cliché: The angelic man-child who gave the gift of laughter freely, and with great joy. It’s mawkish and reductive, but sometimes those are necessary evils, because confronting the full force of artists’ darkness and complexity in the immediate aftermath of death would be too painful. It was bad enough that Williams died in such an agonizing, public way; who but the most ghoulish would want to follow that by rooting around in the downsides of his personal and professional past?

Part of what made Williams’ death so shocking was how powerfully it conflicted with the Williams of the public imagination, who wrestled with dependency issues and mental illness long ago, but had seemingly become a sober, solid American institution. When Philip Seymour Hoffman died of an accidental overdose in February 2014, it came as a shock in part because the public knew relatively little about him. While Williams often seemed to be playing some version of himself in his films, Hoffman disappeared completely inside the roles he played. It was as if there was no Philip Seymour Hoffman in real life, just the art he created.

The shock of Williams’ death was so extreme that people understandably wanted to bathe in the warm glow of nostalgia. And with Williams, there were a lot of great moments and good times to remember—but there was also a whole lot of dreck. The dead almost inherently engender respect, so it’s hard to concede now that while Williams was a smart, kind, talented dramatic actor with a lightning-quick mind, the vast majority of the films he acted in ran the gamut from mediocre to actively excruciating.

Pretending otherwise is dishonest, and an insult to Williams’ memory. Pretending that everything, or even the vast majority, of what he did was great—an attitude that seemed to be epidemic in the weeks following his death—is dishonoring The World According To Garp and The Fisher King by lumping them in with the dregs of Fathers’ Day, Old Dogs, and the many films Williams made that are endured rather than enjoyed.

Immediately after a death, the halo effect serves a useful, even essential purpose. I wasn’t a fan of Paul Walker’s acting, but I was relieved that when he died in a car crash in November 2013, he was warmly remembered as a generous, big-hearted man with a bright future ahead of him, not as a mediocre pretty-boy who lucked into some lucrative roles. In a pop-culture world so dominated by snark, there’s something refreshing about wanting to memorialize the recently dead in the most positive, flattering way—initially.

The problem is that is if the effect lingers too long, it can dramatically and unfairly distort the actual worth of an artist’s career. There was a danger of that happening when Williams died, and the tidal wave of mourning that followed seemed to bestow classic status on everything he did that was halfway successful. It was as if the shock and awfulness of his death instantly elevated Mrs. Doubtfire to a universally adored masterpiece. Briefly, it seemed like agreeably schlocky Williams films like Jumanji had become sacrosanct not because they were great, or even particularly good, but because they were such a big part of so many people’s childhoods, and starred a beloved man who had just died.

Thankfully, the effect is temporary. Sometimes you can trace the exact moment when it ends, and reality kicks back in. For me, it dissipated completely when I watched Patch Adams for the third or fourth or fifth time, as part of a forthcoming Career View on Philip Seymour Hoffman. I was dreading this particular film, in part because it represented the only collaboration between two men whose deaths profoundly shocked and traumatized culture this year, but also because I knew firsthand just how dreadful it is, how pandering, maudlin, and dishonest. Patch Adams is a popular comedic target—Futurama and Cecil B. Demented are among the institutions that have satirized it—but it’s so devoid of self-consciousness that it’s ultimately beyond parody.

Patch Adams has a reputation in some circles not just for being bad, but for being the worst of the worst, the black nadir of rank, self-aggrandizing Robin Williams sentimentality. And does it ever live up to that reputation. I re-watched the film in a strange state of intense yet strangely liberating joylessness. Re-watching Patch Adams finally allowed me to see Williams as he truly was: a genius, and a good man, but also an actor who perpetrated some of the worst movies of the past quarter-century. Even Hoffman couldn’t elevate the material. Nothing could make Patch Adams anything other than an enduring abomination: not time, not even the deaths of two cultural figures whose significance it’s hard to overstate.

It was somehow freeing being able to see Williams and Hoffman in utter garbage, in a film guaranteed to knock the halo off the loftiest acting angel. Williams was no longer a paper saint. He was just an actor who had made some really deplorable films in exchange for great deals of money, and that’s okay. There’s no crime in that—it’s what actors do. Even actors as beloved as Robin Williams. The halo effect helps us process and work through pop-culture grief, but I still feel like I made a breakthrough once I was able to laugh at Patch Adams, rather than with it. It was oddly comforting to feel a strong, honest, intense reaction to the beloved late comedian—even if it was one of extraordinary distaste.