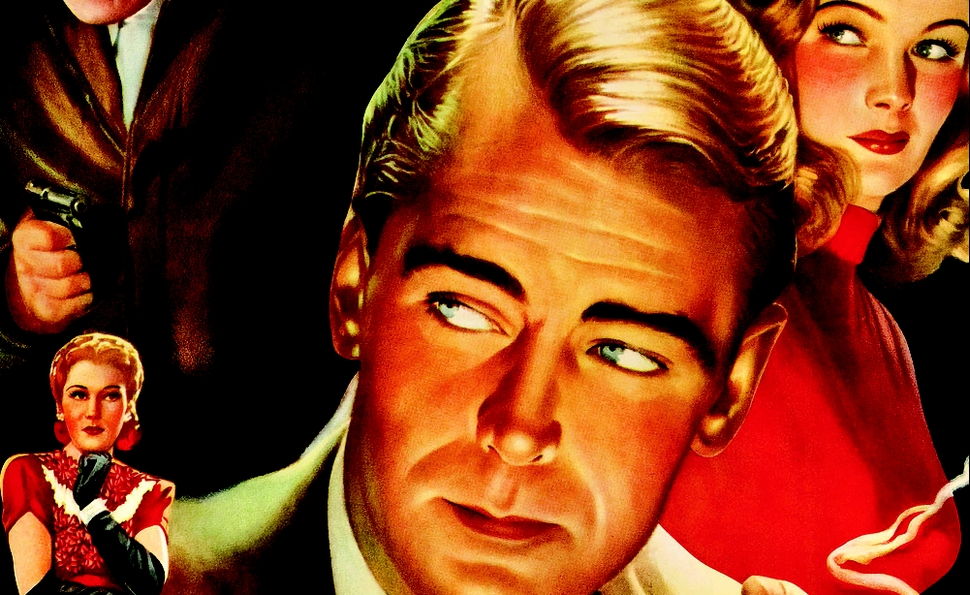 In Mark Fertig’s introduction to his book The 101 Best Film Noir Posters From The 1940s-1950s, he calls noir “the hard liquor of crime films,” which is an apt description. There’s something bracingly adult about noir. Even the best Hollywood movies from the 1940s and 1950s sometimes feel incomplete, because they’re populated by characters who never appear to feel any lust or shame. Film noir was a corrective to that lack. While still working within the limits of Hollywood’s written and unwritten production codes, noir directors like Anthony Mann, Fritz Lang, and Samuel Fuller acknowledged the shadow America where desperate men and women made bad choices. These people aren’t all that different from anybody else. They’re driven by sexual desire and greed, and they wear the stain of guilt that human beings carry with them like a birthmark—even though most have learned how to keep it concealed.

The posters for these movies are startlingly brazen. None of the artists and designers working in the studios’ advertising and promotions departments tried to hide what film noir was all about, because that would’ve defeated the purpose. The whole idea was to advertise seductive women in form-fitting dresses, rough-hewn men holding smoking guns, and underlit neighborhoods far from the local Bijou. To extend Fertig’s analogy, the best posters for noir films were, for some moviegoers, the equivalent of seeing a skull and bones on a bottle of rotgut. “This,” the posters whispered, “is what you’re really looking for.”

The 101 Best Film Noir Posters From The 1940s-1950s is being published in September by Fantagraphics, the venerable comics company that over the past few years has made room in its line for handsome coffee-table books honoring a range of design elements in popular culture. Fantagraphics has published books about VHS artwork and jazz album covers, and in The 101 Best Film Noir Posters, Fantagraphics and Fertig fill 10-by-14-inch pages with beautiful color reproductions, all annotated with mini-reviews of the films.

Fertig ranked his 101 favorites in the book. Here are nine that are especially evocative (with Fertig’s ranking in parentheses). 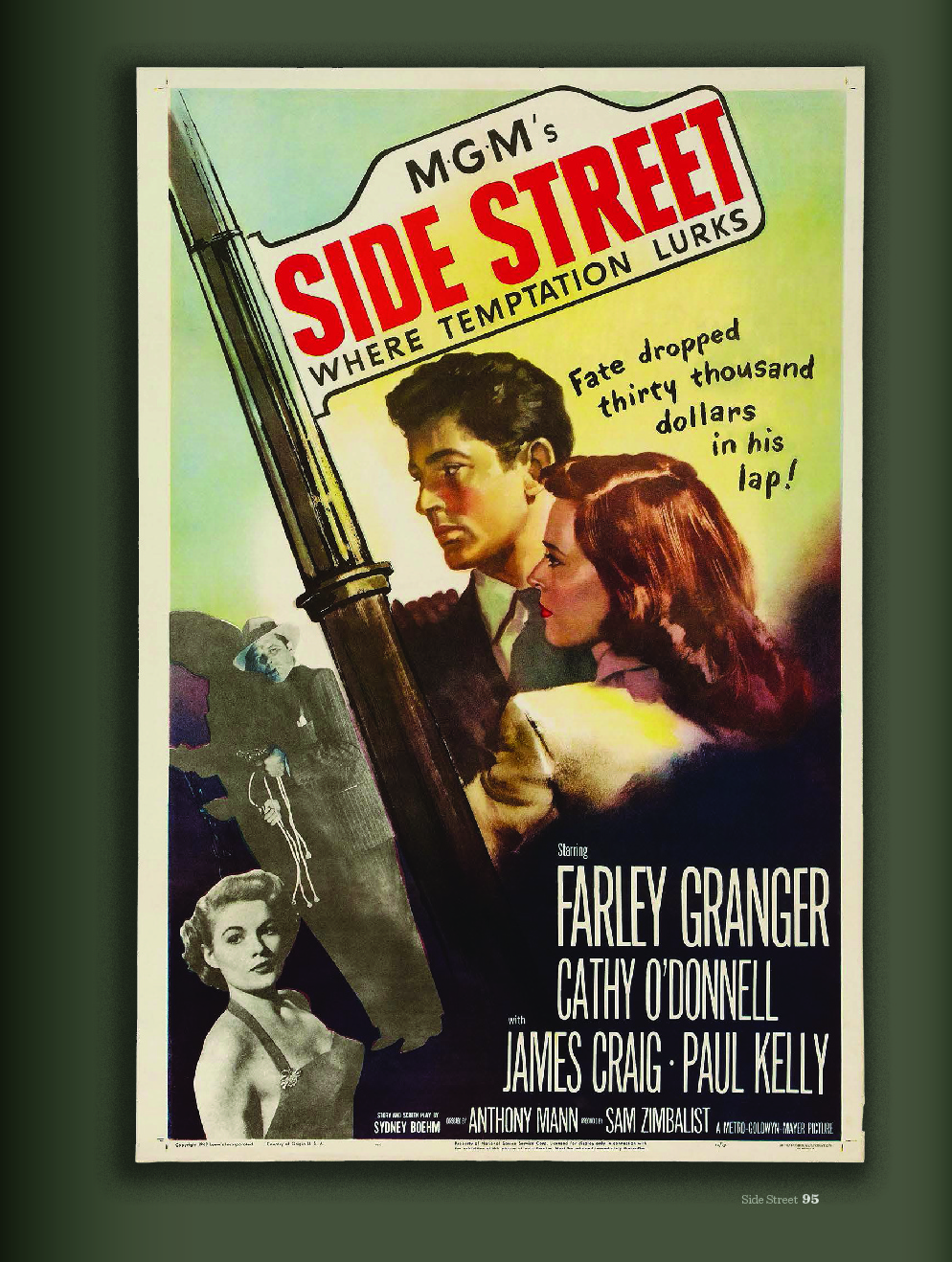 One of the great themes of noir is the idea that anyone can become a criminal if forced into the wrong circumstances. In Anthony Mann’s Side Street (written by Sydney Boehm), Farley Granger plays one of those unlucky so-and-sos, who crosses a line just one time by swiping some money from a sleazy attorney, then ends up on the run from everybody. The Side Street poster illustrates the divide between safety and danger. On one side of a slanted line, there’s colorful domestic bliss; on the other, a morass of darkness and danger. 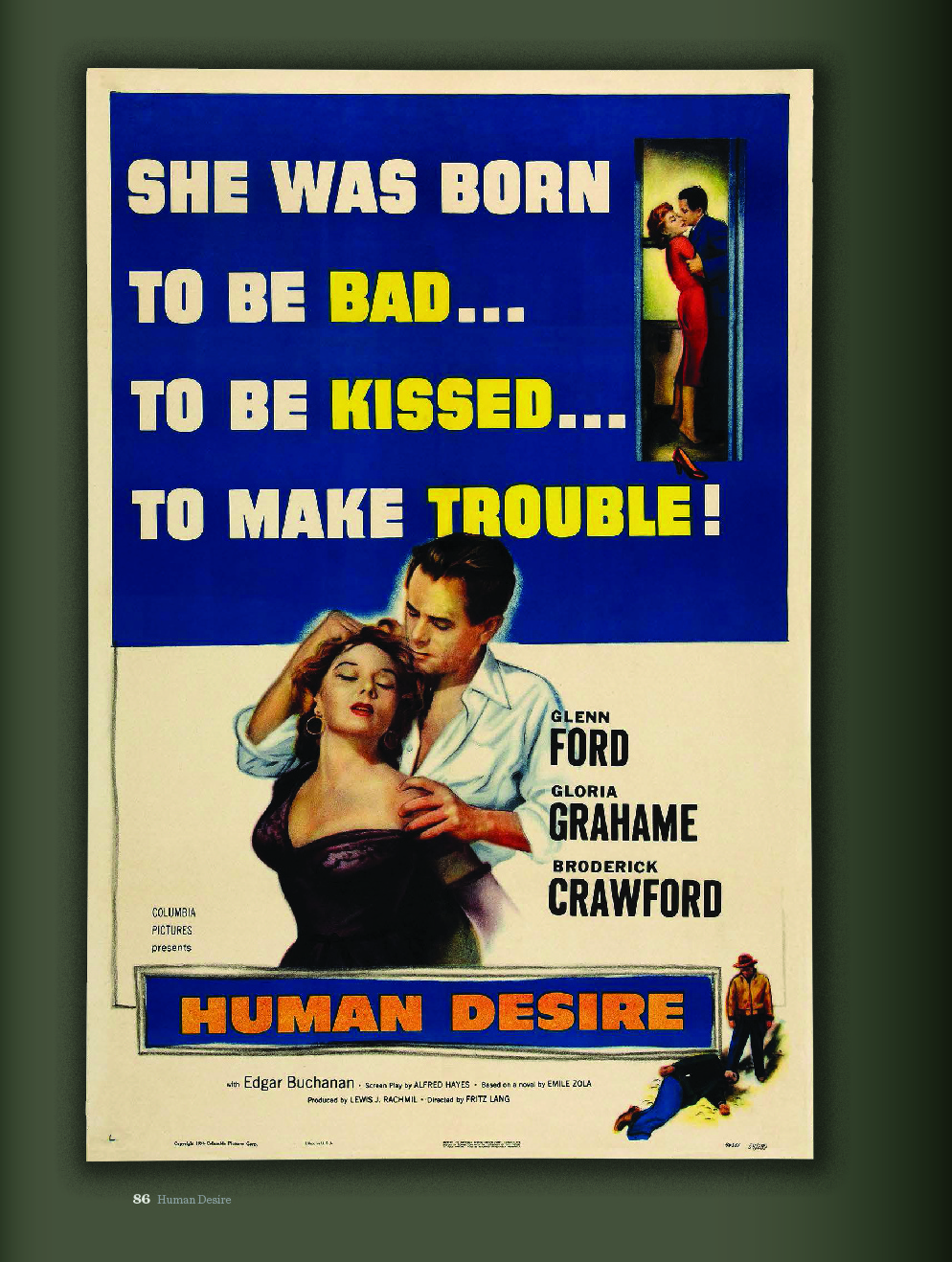 Though 1954’s Human Desire pales in comparison with Fritz Lang’s previous film The Big Heat, the poster is its own kind of masterpiece, stripping the movie down to three elements: a murder, a tryst, and something that looks like a little of both. An uncharitable description of Gloria Grahame’s character dominates the ad, which is a little unfair, given that the scheming hotheads played by Glenn Ford and Broderick Crawford are the ones who really “make trouble” in Human Desire. But the title of the film is like a distillation of what all of Lang’s work explored, and the poster for Human Desire is equally reductive in the way it sells what audiences expect the film to deliver. 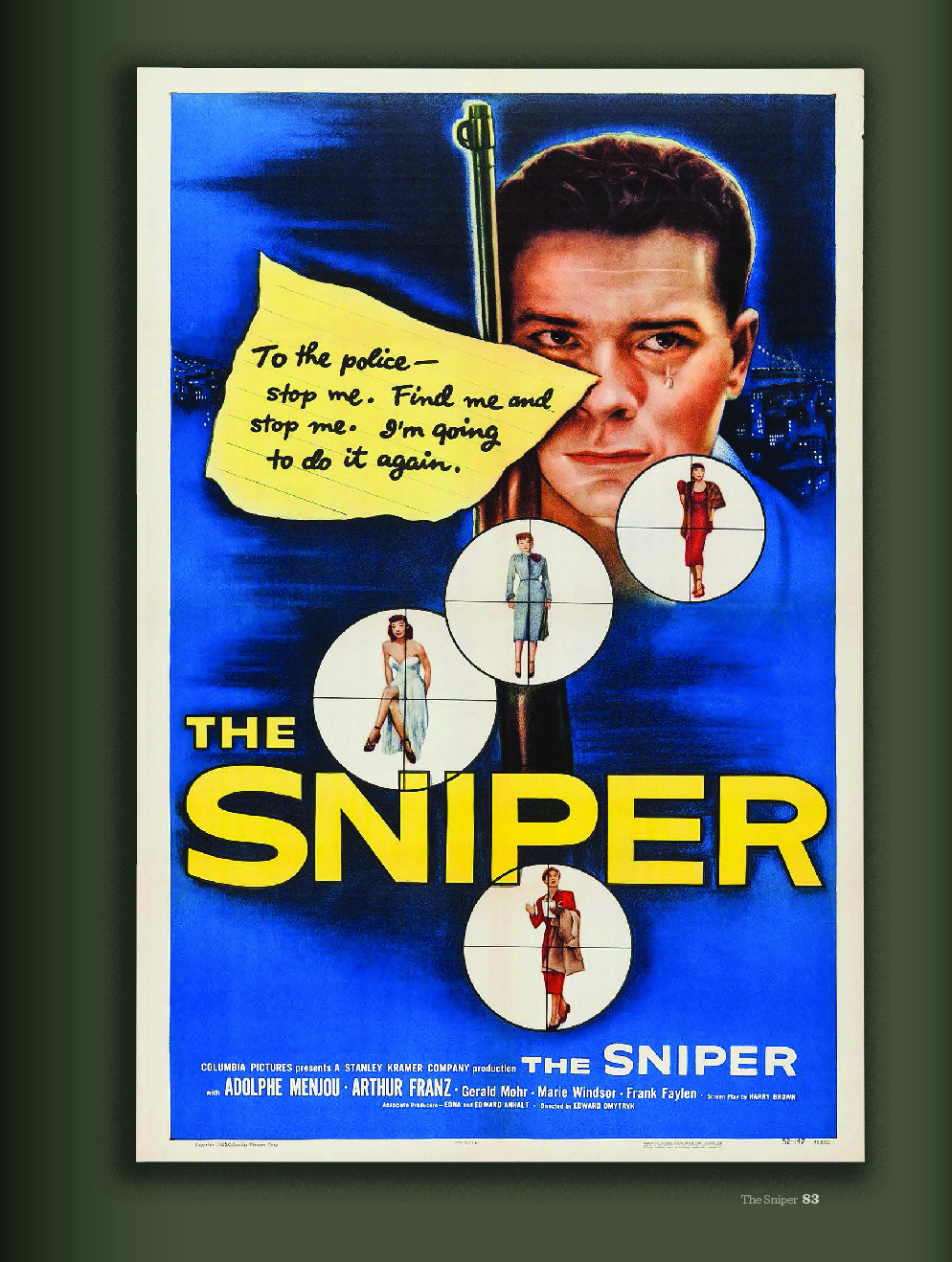 The Sniper isn’t one of the better-known noirs, but director Edward Dmytryk, producer Stanley Kramer, and writer Harry Brown sometimes approach docu-realism, both in their depiction of a deranged serial killer’s process and their willingness to consider the villain’s psychological state. The poster also courts sympathy, showing a single tear running down the gunman’s face as he regards four women the way he regards all women: as potential targets. 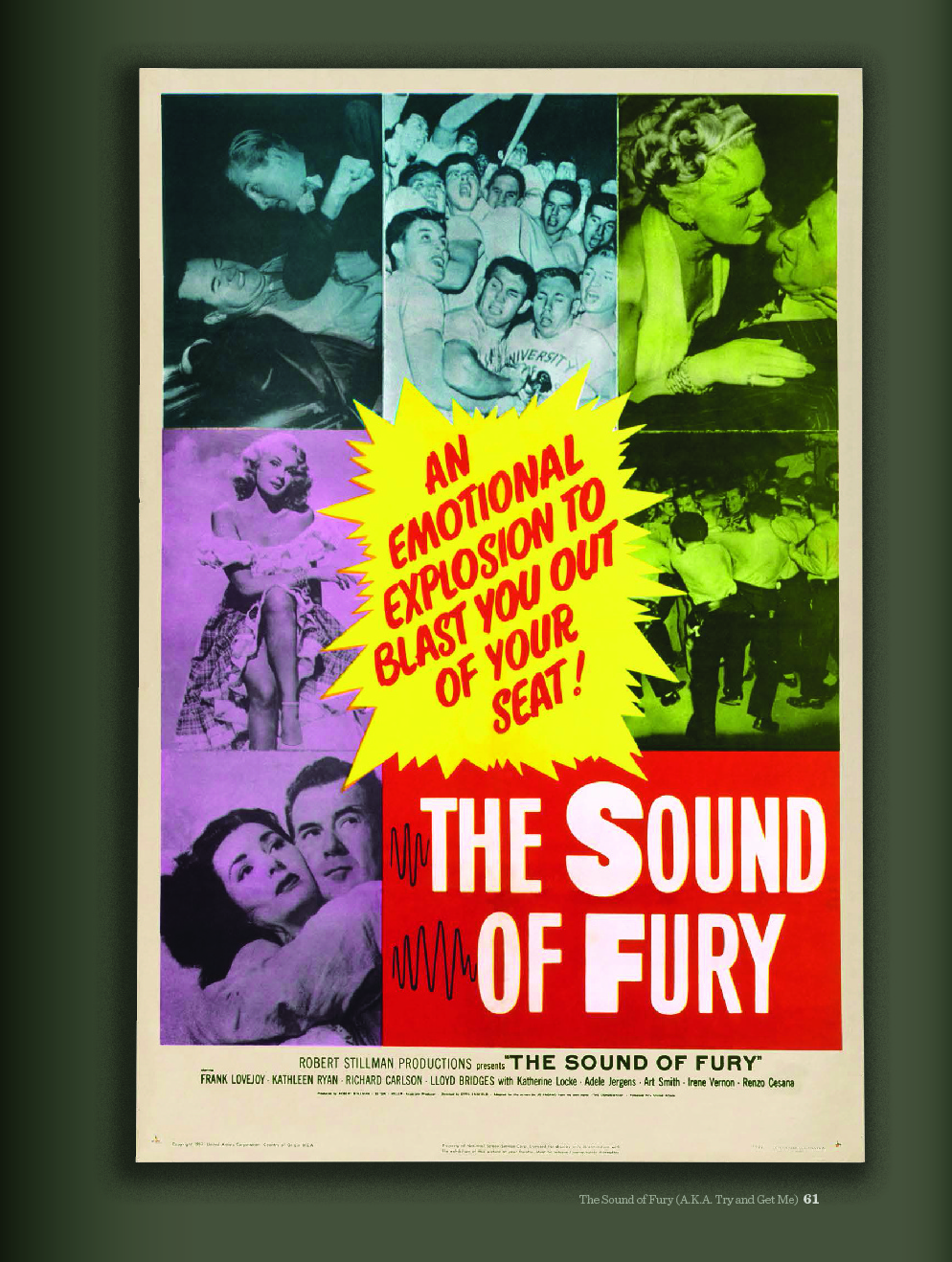 It’s rare to see actual photographs on a film noir poster, but the The Sound Of Fury is itself a rarity: a 1950s noir that spends its first half showing how a down-on-his-luck schmoe could be driven to crime, and its second half indicting “law-abiding” society for being just as malevolent. This poster practically demands viewers connect the dots between the images of sex, violence, and angry mobs. The grid-like arrangement of the pictures makes The Sound Of Fury one-sheet like one of those dime-store slider puzzles. Get the pictures in the right order, and come up with a diagnosis of what ails American culture. 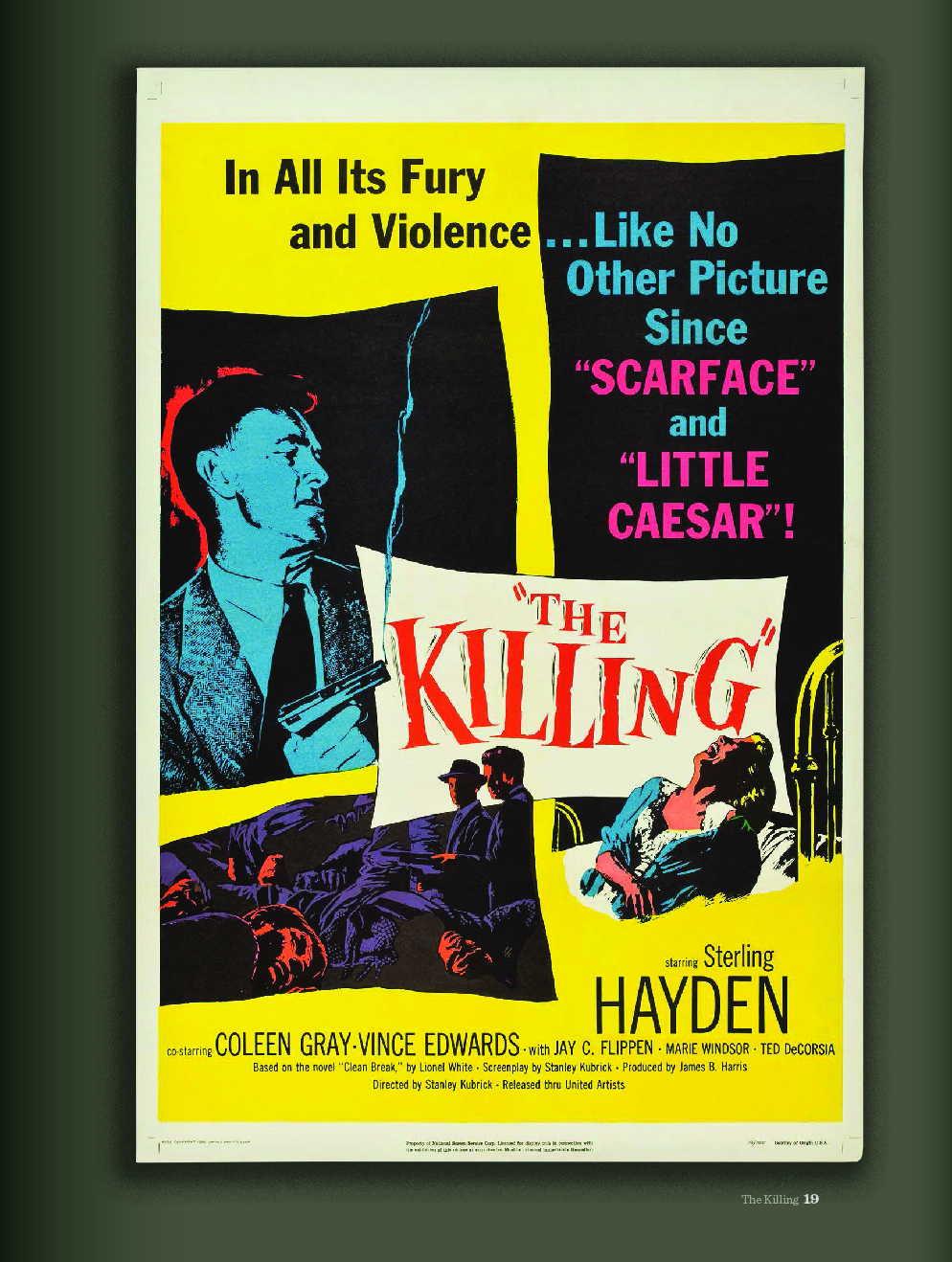 The copy on the poster for Stanley Kubrick’s breakout film The Killing compares it to the gangster classics Scarface and Little Caesar, but The Killing itself is a more experimental take on the criminal caper picture, jumbling the chronology to create a literary effect. The poster resembles proto-pop-art, with stylized, comic-book versions of Sterling Hayden and some of the rest of the cast, surrounding a title that’s been rendered in a font more appropriate for a monster movie. The colors are off for noir, with bright yellow, pinks, and blues suggesting a film with a new approach to the world of heists and henchmen. 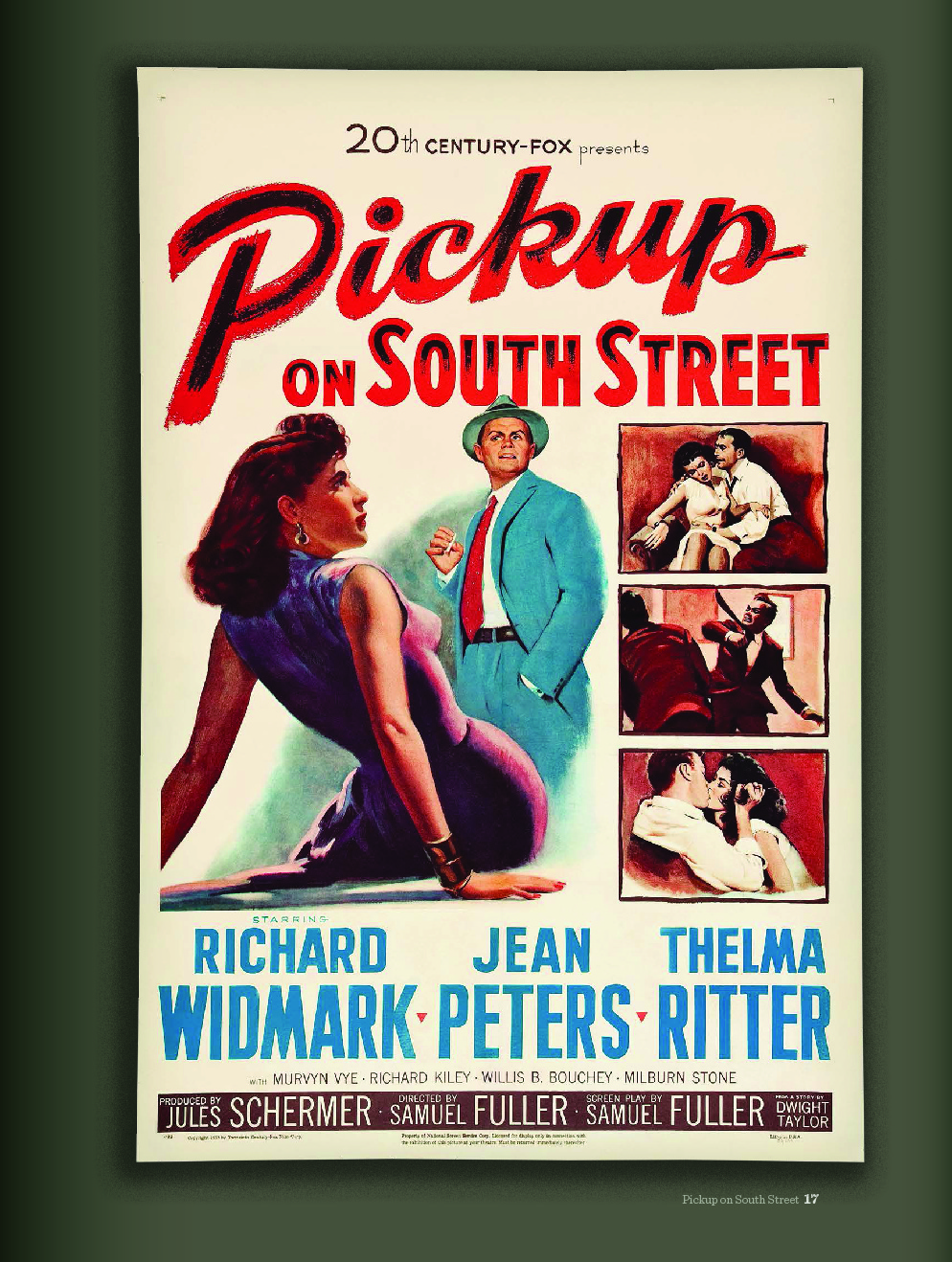 The titular “pickup” in Samuel Fuller’s twisted 1953 classic is meant to refer to the in-demand contraband Richard Widmark’s pickpocket character lifts by mistake. But c’mon. The poster plays up the other connotation of “pickup,” showing a woman leaning back on an unseen bed, luring the thief in for a tryst. This could be considered deceptive advertising, since sexual desire doesn’t play a major role in the plot of Pickup On South Street. But it’s really a prime example of how noir advertising sold what audiences were expecting: something more mature than what Walt Disney offered. 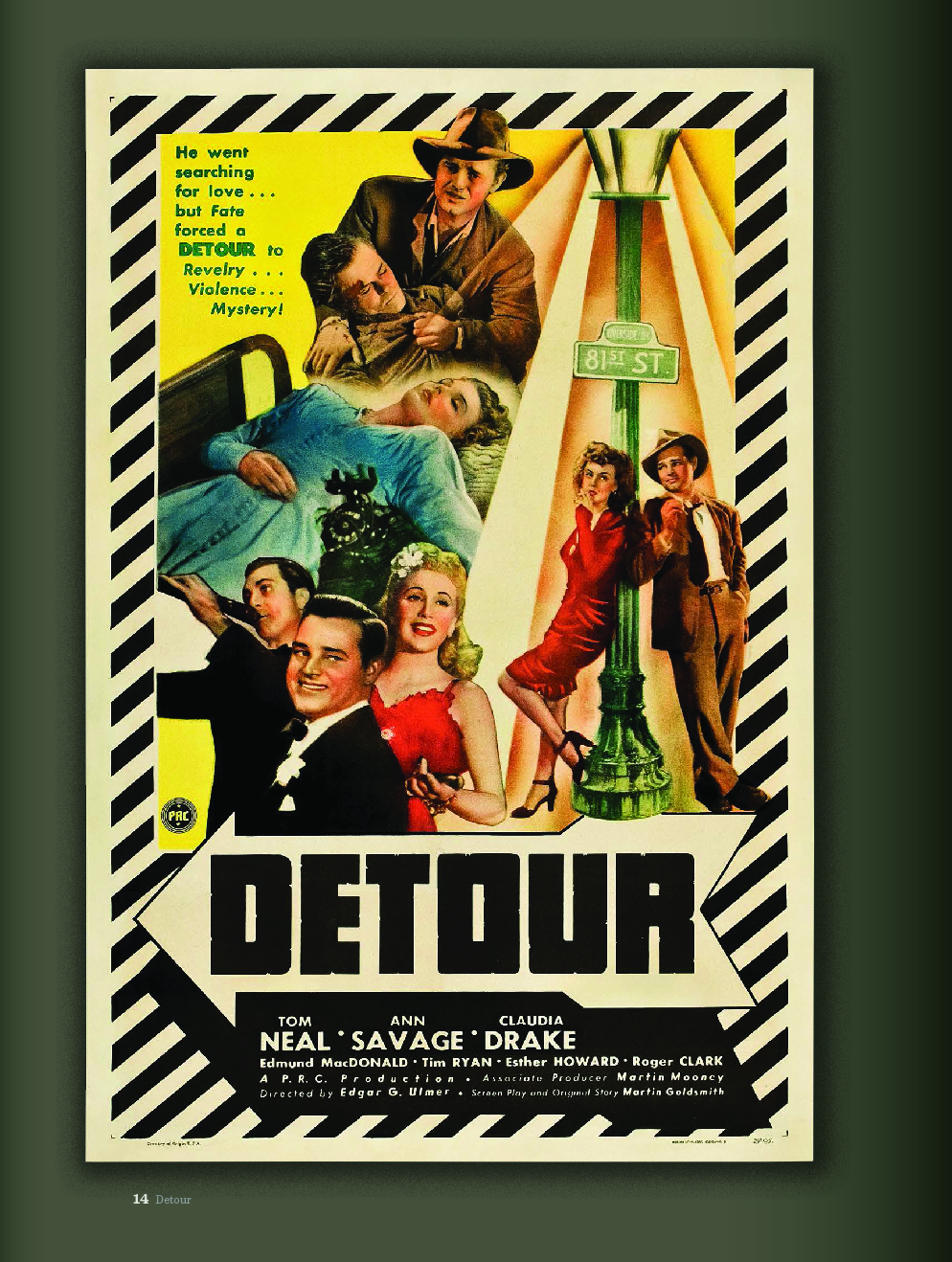 One of the most beautifully brutish of noirs, Edgar Ulmer’s Detour (written by Martin Goldsmith) tells the story of a musician who suffers one fluke accident after another, until he ultimately finds he’s become someone he doesn’t want to be, while saddled with a woman he despises. The big arrow at the bottom of the Detour poster subtly guides the eye to “read” the images from right to left: A man meets a floozy, and then everything changes from happy sing-alongs to death and more death. 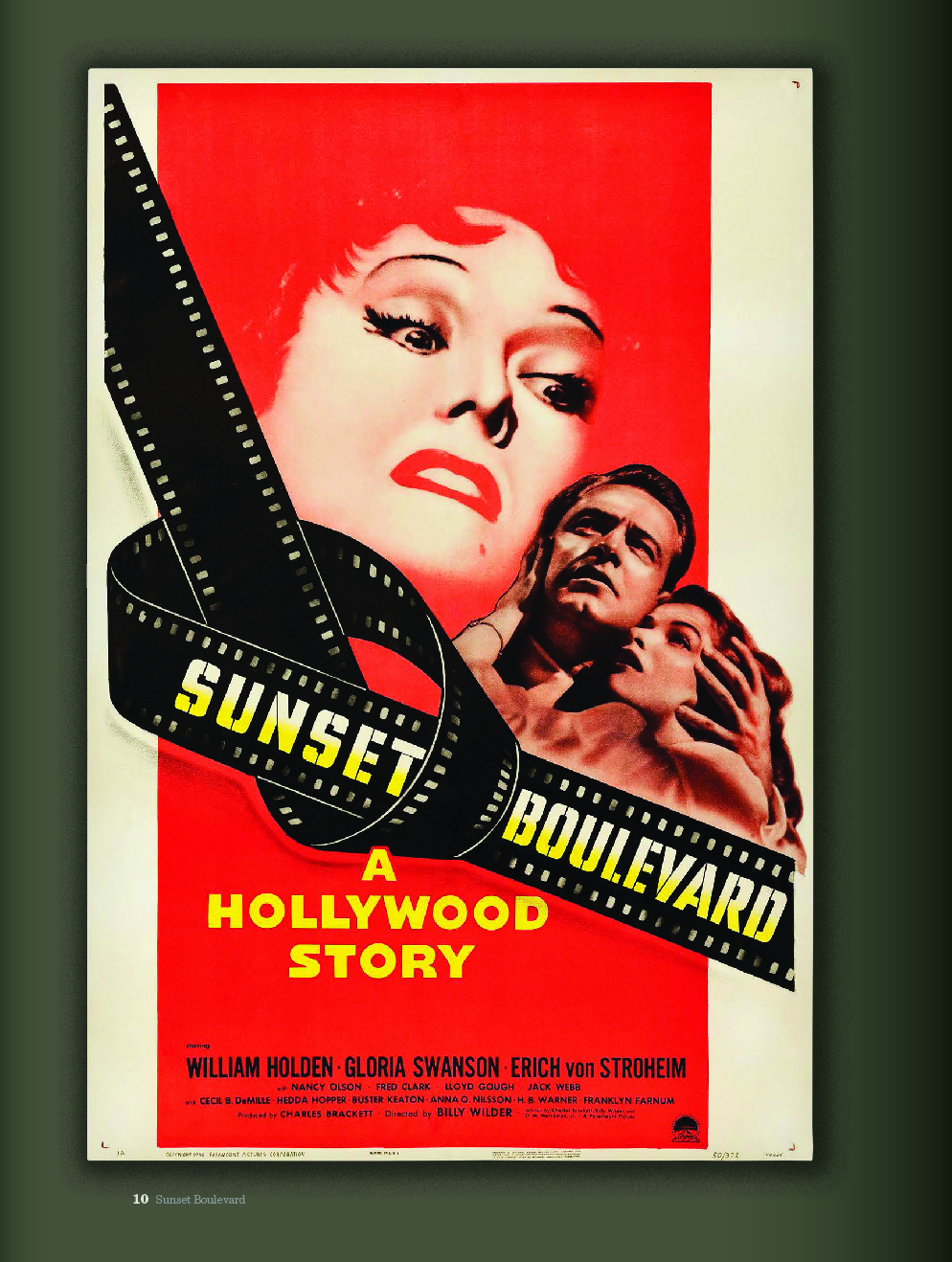 Actually seeing Billy Wilder’s Hollywood noir Sunset Boulevard lends greater meaning to the poster’s giant, scary face of Gloria Swanson, whose fading screen-queen Norma Desmond occupies the backdrop of show business, rendering cold judgment on William Holden’s luckless screenwriter Joe Gillis. But even people who haven’t seen Sunset Boulevard should find this poster’s main image of knotted celluloid intriguing. This is what Hollywood does: It twists and tightens, until it’s choked the life out of weak men like Joe. 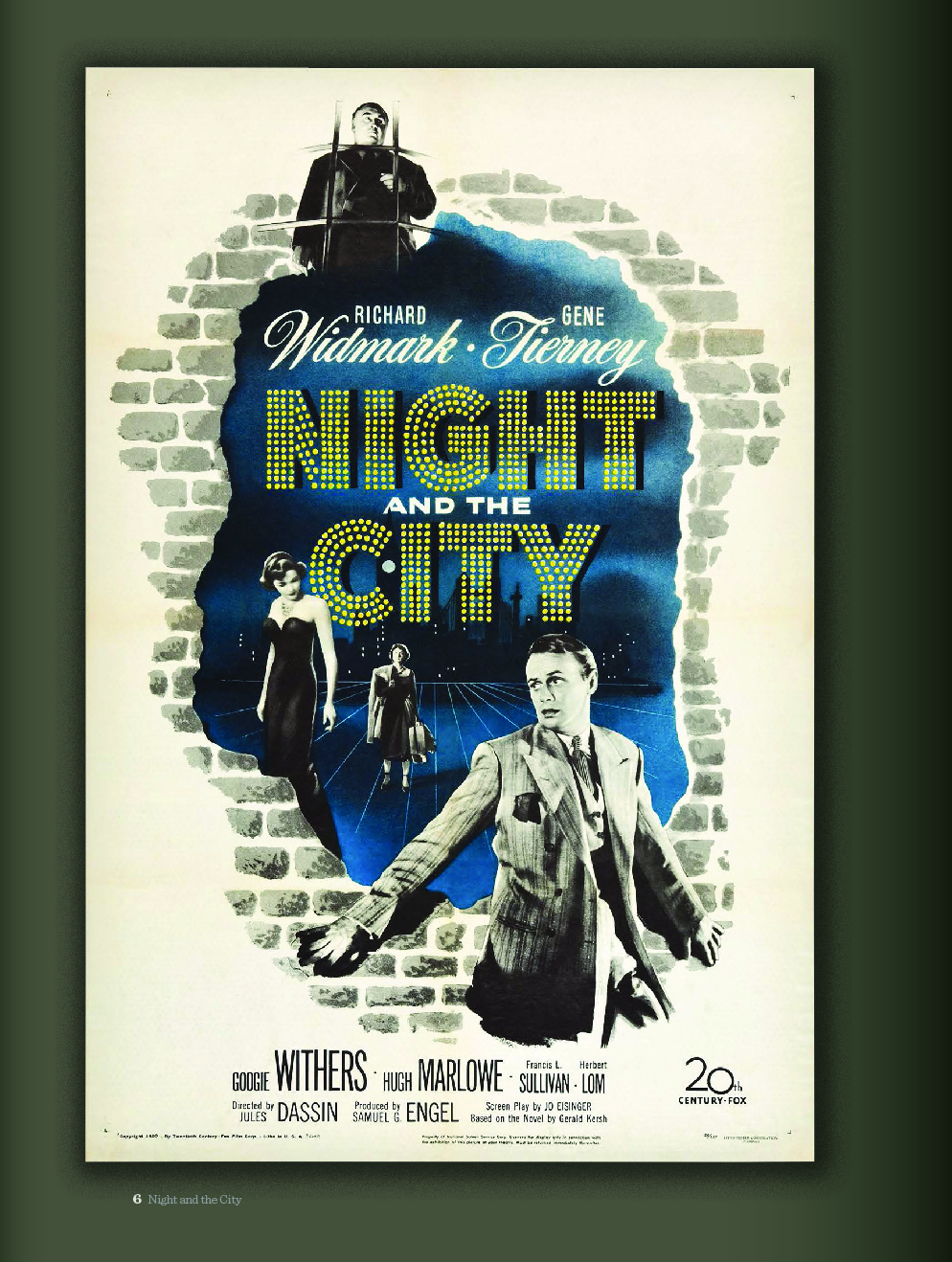 The top five posters on Fertig’s list are Kiss Me Deadly, The Maltese Falcon, In A Lonely Place, Out Of The Past, and Double Indemnity, all of which are fine choices. But none of those are as stunning as this ad for Jules Dassin’s Night And The City. Attractively composed and colored, the poster establishes the dynamic of film noir: There’s a big boss above, a pathetic mug below, and just beyond a hole in the wall, there are further depths to crawl into, containing possibilities both alluring and all-consuming. The question for all noir protagonists is the question raised by the imagery in the Night And The City poster: Can this man head into the darkness and stop when he gets what he wants, or will he just keep sliding until he disappears?