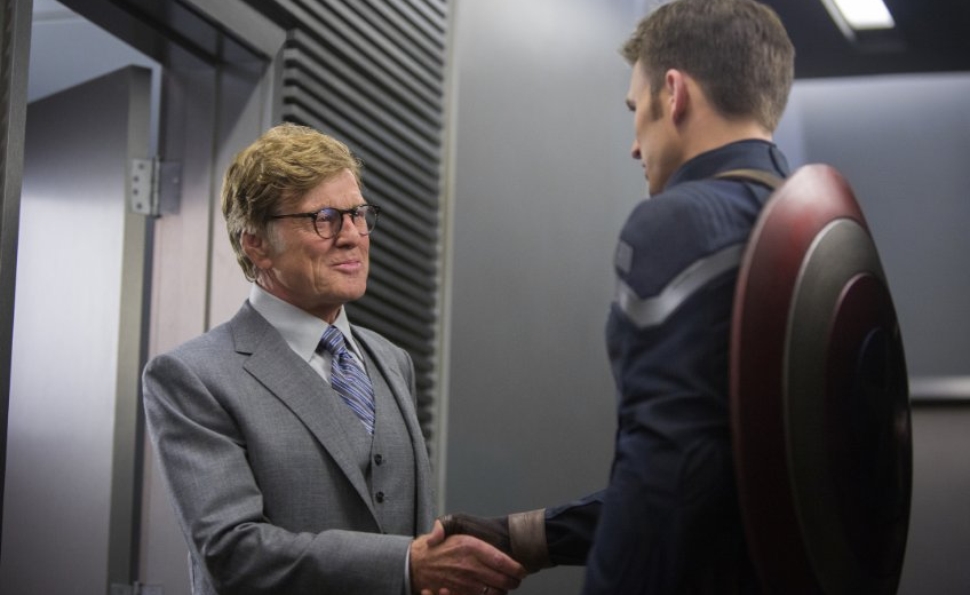 Every Tuesday, the website Screen Junkies uploads a new installment in its Honest Trailers web series. Billed on YouTube as the “trailers that tell you the TRUTH about your favorite movies and TV shows,” Honest Trailers recuts popular movies into coming attractions “the producers don’t want you to see.” A gravel-voiced narrator, mimicking the stereotypically stern tone adopted by trailer voiceover artists, points out the various flaws, mistakes, errors, and goofs in big Hollywood films. To date, the series has more than 50 episodes; each one has been viewed well over a million times. Several have been viewed in excess of 10 million times, making Honest Trailers one of the most popular movie-based series on YouTube.

Last week’s Honest Trailers was devoted to April’s Captain America: The Winter Soldier. After poking fun at its titular hero’s tendency to kick people, and his “vaguely defined superpowers,” the narrator segues into a moment of unusual candor: “Watch as Cap and two non-superheroes end up… actually kicking a lot of ass together in a really entertaining, well-directed movie. What? We have to be honest. It’s good.”

Those 31 words expose the major problem with the series and others like it—including the nearly-as-popular Everything Wrong With… videos from CinemaSins—in what’s become a growing cottage industry of YouTube Movie Nitpicking. To their credit, the best of these videos are slickly produced and crisply edited, and they’re all clearly made by people with sharp senses of humor and obsessive attention to detail. The issue isn’t how these editors do their work, but how they choose their targets.

Take Captain America: The Winter Soldier, which is currently the highest-grossing movie of 2014 in the United States, and the recipient of some of the strongest reviews for any blockbuster released this year. Does the plot contain some pickable nits? Sure, and Honest Trailers picks them. Probably someone would have noticed Hydra double agents in S.H.I.E.L.D. before now. Maybe the bad guys could have picked a more advantageous time to enact their plan. But by the show’s own admission, it’s still an entertaining, well-directed movie. It doesn’t really deserve this kind of treatment, but it got it anyway.

It isn’t alone in that regard. Honest Trailers has mocked almost as many good movies (Skyfall, Paranormal Activity) as bad ones (Green Lantern, After Earth). The same goes for the people at Everything Wrong With…, who’ve even broadened their scope from recent fare to older titles like The Terminator, Die Hard, and the original version of Carrie, which was deemed to contain 43 “cinema sins.” While they poke fun at classics, plenty of truly worthy targets remain off their radar. Between the two shows there’s just a single video, this one, devoted to any of the five worst movies I saw last year (Movie 43, Salinger, R.I.P.D.,  A Good Day To Die Hard, and G.I. Joe: Retaliation). Neither series has gotten around to The Dissolve’s pick for the worst movie of 2013, The Internship.

One look at these videos’ hit totals explain why: The ones about blockbusters are vastly more popular than the ones about flops. The most-watched Honest Trailer is the one for Frozen, with more than 17 million views; CinemaSins’ Frozen video is the series’ second most-popular, behind its attack on the first film in The Hunger Games franchise. The Hunger Games is the fourth most popular Honest Trailers video—at least among those for movies; the series has also done trailers for well-liked TV shows like Game Of Thrones. Of the top 10 Honest Trailers about movies, only two—the original Transformers and Twilight—even come close to being consensus pieces of junk. (As of this writing, the others are Frozen, Titanic, The Avengers, The Hunger Games, the Harry Potter series, The Lion King, The Lord Of The Rings, and World War Z.) The same for Everything Wrong With…, where The Hunger Games, Frozen, The Avengers, Avatar, and The Dark Knight compose the top five, followed by one definitive stinker, The Amazing Spider-Man 2.

Even within franchises, the more popular movies tend to produce the more popular videos, despite the fact that the more popular movies offer much less material to ridicule. CinemaSins’ video about The Matrix garnered twice as many views as its video about The Matrix Reloaded, and the stats on its Rise Of The Planet Of The Apes clip vastly improved on the ones for the Tim Burton Planet Of The Apes episode. By and large, these video aren’t finding everything wrong with genuinely crappy movies, they’re finding “everything wrong” with good movies that people will watch a video about. The subjects aren’t the most suitable ones, they’re the ones that are the most traffic-friendly. From a business perspective, that’s perfectly understandable.

There’s something else at work here beyond simple popularity, though. As detailed in a recent study reprinted at Smithsonian.com, while “joy moves faster than sadness or disgust,” on social media, “nothing is speedier than rage.” Targeting movies with intensely devoted fan bases—like Frozen or comic-book movies—and pissing those fans off until they’re angry enough to share your work with like-minded friends… That can be very good for business. A video rightfully slamming an actual piece of junk that everyone hates has a smaller chance of going viral. (“Guys, guys! You gotta check out this ‘Everything Wrong With John Carter video! They nailed it!”) On the web, whether someone loves a video or is infuriated by it is totally irrelevant. All that matters is that they watch, and increasingly, that they share it.

Again, from a financial perspective, this is all completely logical. Of course these people should theoretically do whatever they can to grow their viewership and increase their ad revenue. But from a creative perspective, it’s a double standard. If Hollywood filmmakers did something purely for financial reasons—because they knew it would bring the most people to the theater or sell a few more action figures or T-shirts—these shows would make fun of them for it, and rightfully so.

Modern technology has put the power of movie editing into the hands of movie fans. A few years ago, that led to the rise of video essays, with smart critics like RogerEbert.com’s Matt Zoller Seitz using Hollywood’s own tools to dissect and parse their work. But dense, intellectual video essays are a niche product for a niche audience. While there are still a few talented essayists carving out a valuable place for themselves in the world of criticism (like Kevin B. Lee, who has contributed video essays to The Dissolve, and recently created a fascinating “premake” of Transformers: Age Of Extinction), and a few video makers who manage to straddle the line between entertainment and intelligent criticism (like Red Letter Media, the creators of an infamously brutal series of video reviews of the Star Wars prequels, and the producers of a sharp, though less-traffic-friendly series called Half In The Bag), it seems like many of the most talented amateur editors have gravitated away from video essays toward supercuts and comedy series, which are easier to digest, and therefore more readily viral on social media. A few years ago, we seemed on the cusp of a revolution in film criticism. Now it seems like we’ve taken a step or two back.

If you enjoy these videos, more power to you. Once in a while, these guys knock it out of the park. (CinemaSins’ A Good Day To Die Hard episode suggests the movie was even worse than I thought—and I thought it was terrible.) But usually by the time I get to the end of one (if I don’t turn it off halfway through) I feel depressed. These videos feed on the fact that negativity spreads faster on social media than positivity, and contribute to an increasingly sour air in the world of online movie fandom. CinemaSins’ website proclaims that “sometimes, even great movies suck,” but watching these nitpicking videos regularly suggests that every movie sucks. And if everything sucks, why care about movies at all?