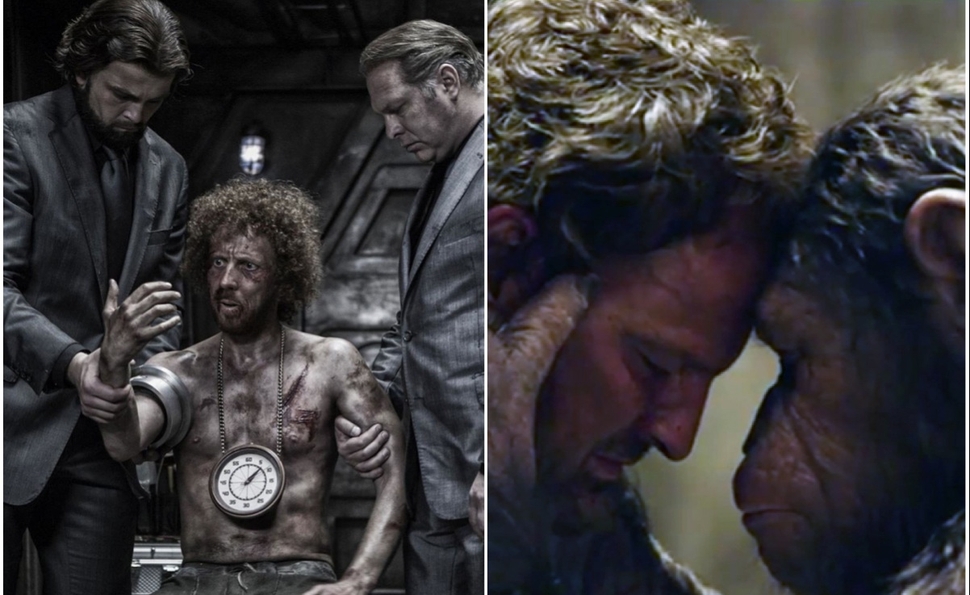 The last few weeks have seen the release of Snowpiercer and Dawn Of The Planet Of The Apes, two science-fiction action pictures that depict a future where the human population has been reduced to a minute fraction of what it is now. Both films traffic in analogy and metaphor, using their premises as a foundation from which to comment on class conflict and culture-clashes. In that way, they join 2014 genre pictures like The Lego Movie, Godzilla, X-Men: Days Of Future Past, and Edge Of Tomorrow, which have all grappled with themes both heavy (such as environmental wrath, and the perils of factionalism) and light (such as the power of narrative, and human creativity). In a way, this has been a year of big ideas at the multiplex.

But then, isn’t it always? Big blockbuster action movies often justify their existence to some extent by tackling big subjects, either directly or incidentally. One of the most ideas-laden films of last summer was Man Of Steel, which may be mined for decades by cultural critics for what it has to say about paternalism, savior complexes, and moral dilemmas. None of that, though, makes Man Of Steel any less oppressive in its violent spectacle, or any less muddled in its message.

No, what makes Snowpiercer and Dawn Of The Planet Of The Apes so satisfying is that they’re memorable for more than just their thematic relevance. They work first and foremost as movies, which progress steadily and surely between moments of tension, exhilaration, and awe.

In the case of Dawn Of The Planet Of The Apes, the film is following in the footsteps of its predecessor: not Rise Of The Planet Of The Apes (which was a good movie too), but the original 1968 Planet Of The Apes. The reason why the first Planet Of The Apes was such a huge hit—and has endured for generations—is because of how it moves assuredly from one powerhouse scene to the next. Some of Planet Of The Apes’ major setpieces openly engage with the themes of the film, as in the big centerpiece “trial” of Charlton Heston’s astronaut character, George Taylor, during which the apes have some familiar conversations about science, religion, generational differences, and race. But the movie works just as well when Taylor is rafting through a canyon with his fellow astronauts, or being hunted by the apes, or making the dreadful discovery that ends the film. 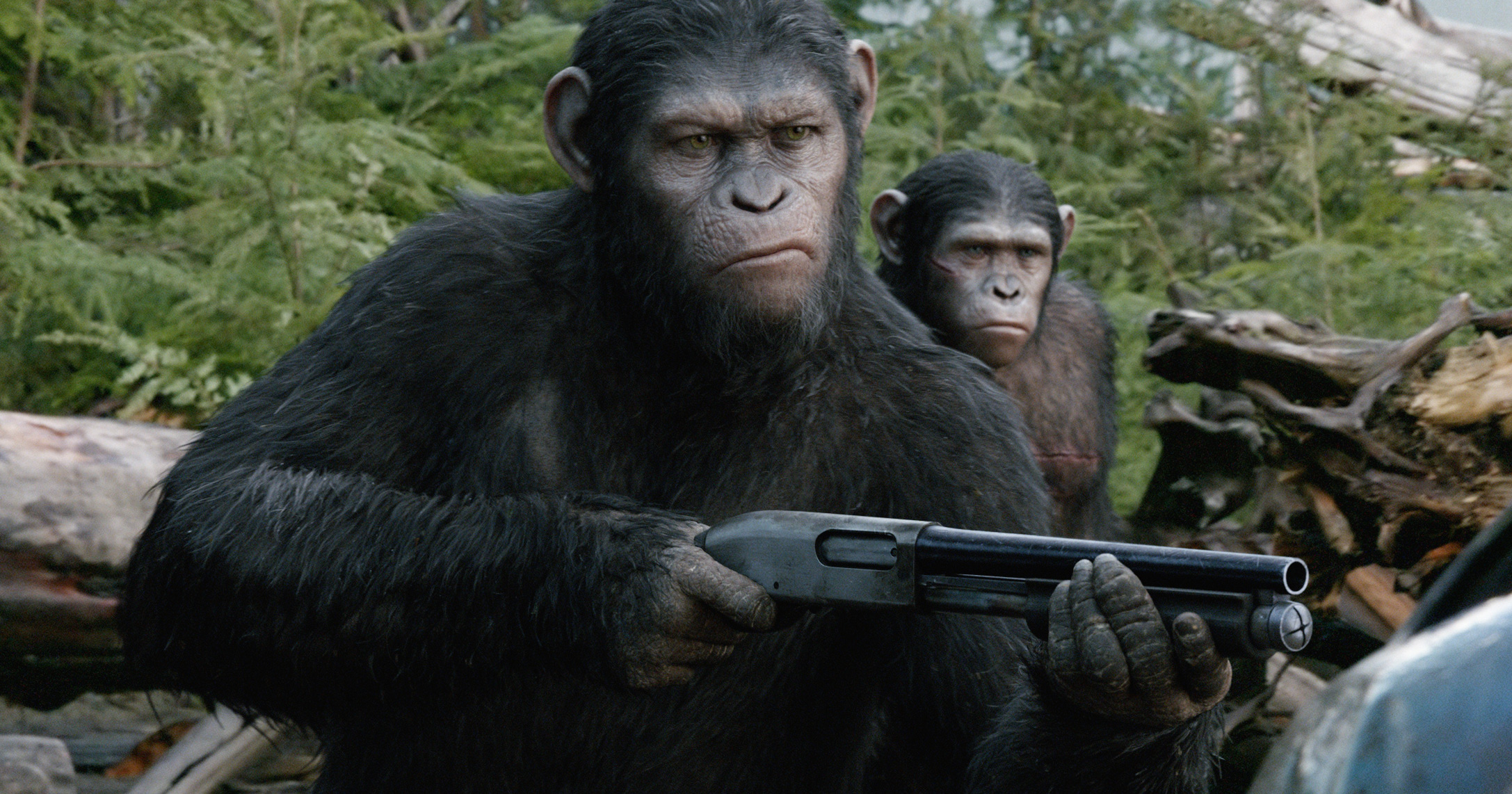 Similarly, Dawn Of The Planet Of The Apes sports some challenging conversations about trust and misplaced loyalty, made all the more meaningful by the difficulties that the apes and humans have with basic communication. The two species look different—each menacing in their own way—and they speak and act differently. The lesson that both ape leader Caesar (Andy Serkis) and his new human friend Malcolm (Jason Clarke) have a hard time getting across to their own kind is that the actions of one don’t represent the actions of the many. One half-cocked human or ape with a machine gun shouldn’t stain the whole tribe.

What makes Dawn Of The Planet Of The Apes so exciting is how well the point of the movie is integrated into its visual design and narrative structure. Director Matt Reeves and producers-screenwriters Rick Jaffa and Amanda Silver (working with screenwriter Mark Bomback) spend the early part of the film creating empathy for the apes, showing how developed and cooperative their culture has become in the decade since the events of Rise Of The Planet Of The Apes. But as soon as the humans arrive in Muir Woods, the tone changes, and suddenly the apes become more threateningly alien. So it goes throughout the film, whenever the apes and the humans are in the same space: Any rapprochement threatens to sour in an instant, followed closely by ape-on-human violence. Reeves plays up that sense of wonder and fear, and how it would actually feel to encounter a society of apes in their own habitat.

As for Snowpiercer, it has one of the more ingenious bits of plot-construction that I can recall for a modern international blockbuster. The film begins in the back of the enormous train that carries what’s left of a deeply socially stratified humankind; and it begins with the hero Curtis (Chris Evans) planning a revolt that will see the tail section passengers charging ahead to the cars where the wealthier passengers dwell, on their way up to the engine to overthrow the dictatorial Wilford. Director Bong Joon-ho and his co-screenwriter Kelly Masterson (loosely adapting the French graphic novel Le Transperceneige) don’t reveal anything of what’s ahead for Curtis and his rebels, until they arrive. The story progresses one car at a time, just like the hero.

The same is true for the backstory. As Curtis moves through the kitchen car, the prison car, the aquarium car, the garden car, the school car, the spa car, the party car, and onward, he learns more about the history of the train, and he reflects on some of the personal history that he’d been trying to forget. With each step away from the cramped, chaotic darkness of the tail section, Snowpiercer’s world gets bigger and more complex, until Curtis goes as far as he can go, at which point Bong and Masterson reveal that the hero’s world is not that big after all. The train may be massive, but it’s still a train, with narrow corridors and a terminus on either end. There’s not a lot there to conquer, ultimately. 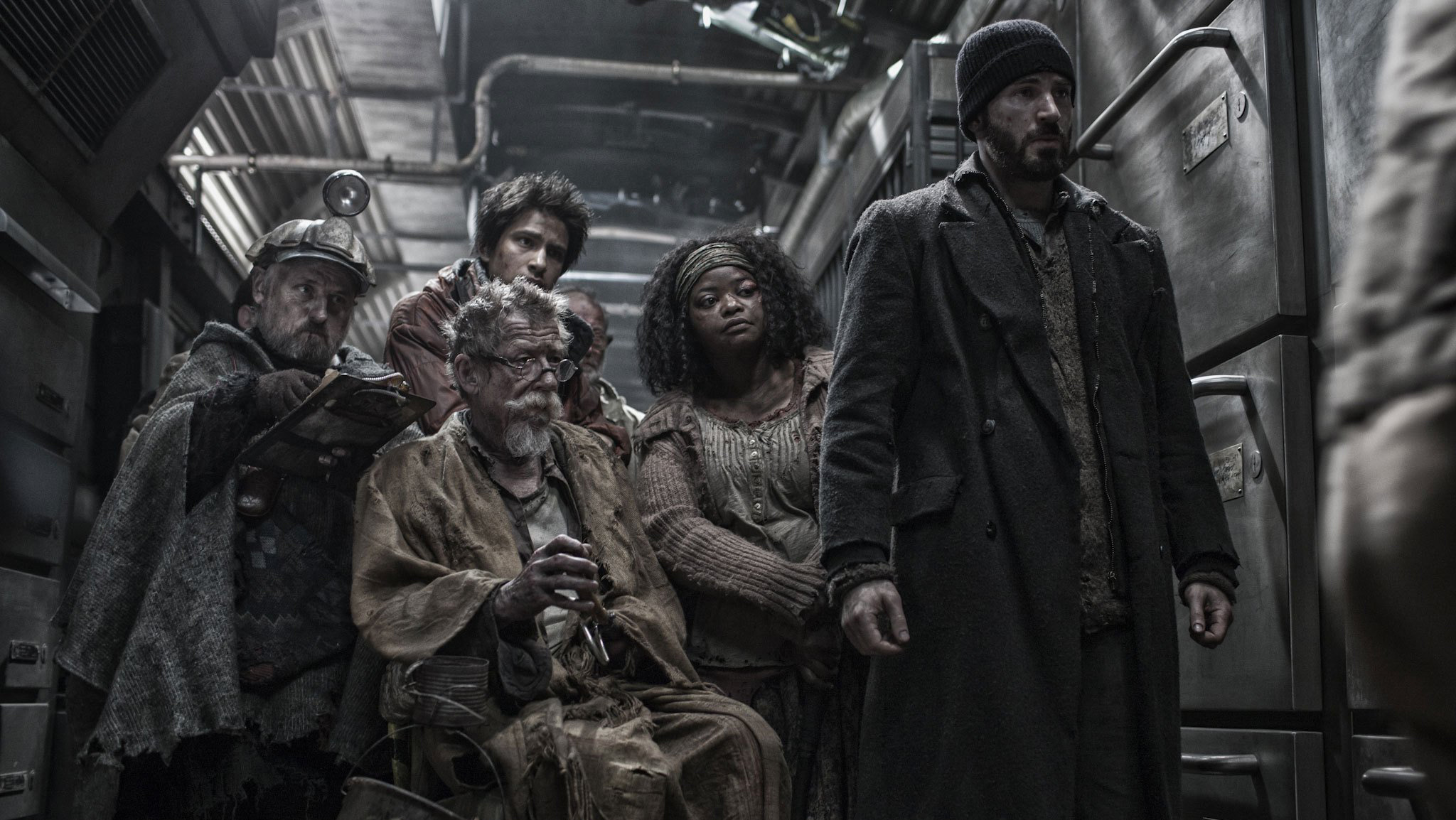 Like The Lego Movie and Edge Of Tomorrow, Snowpiercer is a “self-aware blockbuster,” in that it’s partly about the way legends are crafted and spread. Even in a futuristic hellscape, people need the distraction of spectacle; and Bong and Masterson are in no way unaware of the irony of making a movie that will inevitably serve for some as just a momentary respite from real-world wealth disparity. That commentary on Snowpiercer’s inadequacy is built right into the script. Just as Curtis eventually realizes that the train only extends so far, so Bong and Masterson seem to realize that there are limits to what a cleverly reflexive social commentary can do for a moviegoer.

Snowpiercer isn’t a great film because it has something to say; it’s a great film because even if it was thematically empty, it’d still be a marvel. From scene to scene, Snowpiercer is a weird, wild experience, with viscerally exciting action sequences and moments of eccentric humor. (The hilarious awkwardness of Tilda Swinton’s Minister Mason makes her one of the great movie villains of recent years, and a fine companion piece to Swinton’s Oscar-winning performance in Michael Clayton, where she also played a bad guy who didn’t really know what she was doing.) To me, the scene that best defines Snowpiercer isn’t any of the ones at the end, where Curtis learns the biggest secrets of the train, but rather the 10 minutes or so of the movie that take place in the school car, where a fanatical teacher—played with great gusto by Alison Pill—indoctrinates her students into the cult of Wilford. The school scene is essential not just because it reveals a little more about how a corrupt order is maintained, by programming children to believe the order is just, but because it’s so memorably strange and funny, with fantastic images of the teacher singing songs and using elaborate hand gestures to keep her students on the right track.

Charlie Chaplin’s 1940 comedy The Great Dictator famously ends with a long, somewhat naive plea for tolerance and peace that some critics consider to be the movie’s fatal flaw. But the big speech at the end of The Great Dictator is disappointing mainly because so much of what precedes it is so deft. There’s no mistaking the meaning of the little interlude in The Great Dictator where Chaplin’s Hitler-like dictator Adenoid Hynkel bounces a globe-shaped balloon through the air—literally playing with the world. But what makes that scene such a classic is its  visual impact, and the grace of Chaplin’s performance. Snowpiercer has moments like that, as does Dawn Of The Planet Of The Apes.