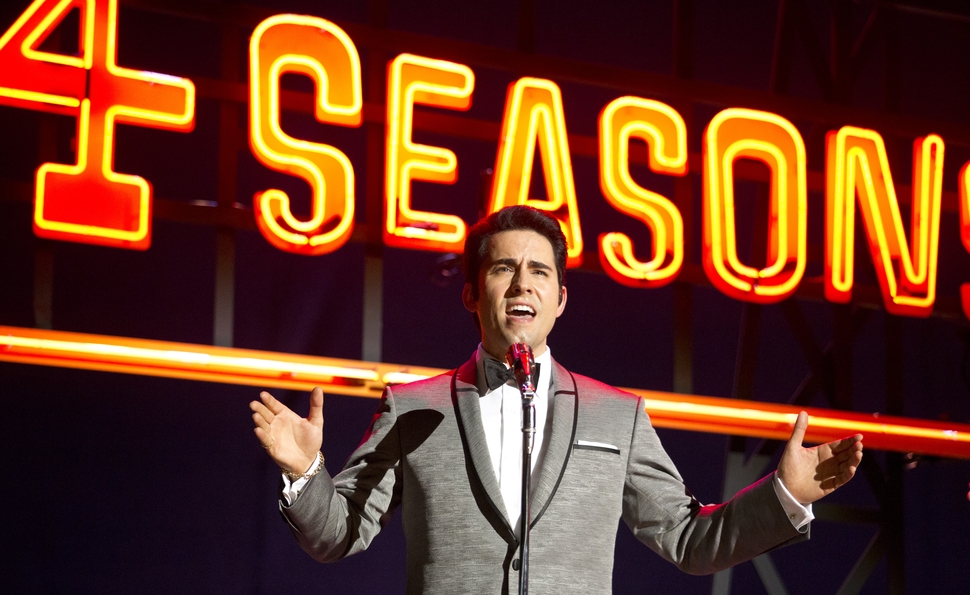 Through the past, carelessly

Watching Clint Eastwood’s filmed version of the Broadway musical Jersey Boys, I felt adrift in time. The film opens in a 1950s New Jersey that seems inspired as much by Happy Days as by the actual 1950s. Then it drifts through the decades without offering many clues about where it is in time. I only started to realize that Jersey Boys had moved fairly deep into the 1960s when Erich Bergen, the actor playing Four Seasons keyboardist and songwriter Bob Gaudio, showed up sporting facial hair, and the group prepared to make an appearance on a color broadcast of The Ed Sullivan Show. Before that, the film only fleetingly suggested that time had progressed at all: A trip to the apartment of producer and songwriter Bob Crewe (Mike Doyle) reveals a faux-Lichtenstein painting on the wall. Later, Frankie Valli (John Lloyd Young) grows his hair out from cropped to floppy, and beige starts to dominate the color scheme. Even so, the film seems stuck in a perpetual state of anytime. It takes place in a particular era, but it doesn’t invest much energy in getting the era’s details right. It isn’t the worst offender in this regard, just the latest reminder of how often movies bungle the past.

Eastwood could have used the film’s occasionally bizarre disconnect from any sense of time to its advantage. It is, after all, partly about what it’s like to be yoked together as a musical act for so long that the members start to lose touch with the outside world. But by ignoring the changing times, the film also ignores another major factor in the Four Seasons’ initial dissolution—namely, changing tastes. By 1969, the group was struggling to keep up with the times, releasing the socially conscious concept album The Genuine Imitation Life Gazette to a public that didn’t want it. As the years rolled on and the hits faded, the act started to look like a relic of the tastes of an earlier time.

In the film, that disconnect becomes distracting. Jersey Boys doesn’t have any responsibility beyond telling its story well, but it ignores and obscures period detail enough to interfere with that task. Any film set in the past doesn’t need to scrupulously re-create every detail of a bygone era, but it should convey a sense of the time. By contrast, consider Not Fade Away, another movie about New Jersey, rock music, and the 1960s that takes an opposite approach. Anyone looking to find the two extremes with which movies can create a sense of period might start by programming it alongside Jersey Boys in a double feature.

Released without much fanfare in December 2012 (where it had to compete for attention against The Hobbit: An Unexpected Journey, Les Misérables, and Django Unchained), Not Fade Away, the feature directorial debut of Sopranos creator David Chase, attracted many kind notices, but few glowing ones. Audiences largely stayed away, though the film’s less-than-aggressive promotion in a crowded season might have had something to do with that. It’s always heartening to see audiences catch up with a movie later, but I haven’t seen that much evidence of Not Fade Away finding a second life on home video, which is a shame, as it’s a terrific rock ’n’ roll story that depicts how even bands with talent often end up getting stuck in neutral.

Superficially, the film has a lot in common with Jersey Boys besides the setting and the era. Both break the fourth wall (though Not Fade Away saves that for its extraordinary final scene), both concern the clashes of egos that derail even the most close-knit groups, and both have a habit of losing track of, then returning to, characters after long stretches. (Not Fade Away occasionally plays, and not to its benefit, as if Chase is trying to squeeze a whole TV season’s worth of storytelling into a feature-length film.) Yet the two films couldn’t be more different in their approach to portraying the 1960s. After a brief scene re-creating a fateful meeting between young Mick Jagger and young Keith Richards, Chase cuts to a suburban New Jersey main street that will soon feel the impact of that meeting. A movie-house marquee advertises Roger Corman’s 1961 adaptation of The Pit And The Pendulum. A boy named Douglas (John Magaro) is hanging around a music store when a kid from another school approaches and observes, “Those Black Diamond Rogers are cooler than shit.”

He’s referring to drums, but the film doesn’t pause to clue viewers into the lingo. It doesn’t care whether they catch up at all. Not Fade Away is quietly obsessed with getting the details right. Kids dance to The Beatles’ version of “Please Mr. Postman” while a special commemorating John F. Kennedy plays on a muted television. They wear the closest approximations of contemporary fashion their budgets will allow. (Like the characters in Matthew Weiner’s Mad Men, they dress in 1960s clothes, not 1960s costumes.) When Douglas goes to a record store to stare longingly at a Rolling Stones album, Frank Sinatra albums look down on the scene from the wall behind him. Every scene suggests a larger world that stretches well beyond the frame of any individual scene. Chase creates a sense that anyone walking into the movie could stroll down the street, do a little shopping, then go home and watch black-and-white episodes of The Beverly Hillbillies while dining off Fiesta dinnerware.

The film feels like the work of someone who lived in that time and place, because it is. Douglas’ story lines up closely with Chase’s. Both have overbearing, unstable mothers (Molly Price often seems to be playing a younger Livia Soprano here), both fall under the spell of rock ’n’ roll, and both eventually leave it for California and for filmmaking, after many stop-start years filled with distractions, disillusionment, and enough glimmers of hope to keep the dream limping along. Getting the details right might be a personal matter, but it also serves the film, which sets out to show how the 1960s rippled through one particular corner of the world, the one Chase knows to the last detail. Botching the little touches would throw off that mission.

Jersey Boys doesn’t attempt realism, and whisks through the years. Not Fade Away hunkers down in a single location and watches for shifts in the wind. Though Not Fade Away is far more effective in this instance, that doesn’t mean it takes the right approach and Jersey Boys is wrong, though the latter might have worked better if it had been handled with more thought and skill. It isn’t even possible to say one is truer than the other, any more than it’s possible to say Seurat’s depictions of ponds are truer than Monet’s. Even Chase’s layering of detail is its own form of artifice. If anything, we tend to sand off the rougher edges of the past in our memory. That’s partly why broad portrayals of history—visions of the 1970s filled with Afros and bell-bottoms, flannel-rich scenes set in the 1990s, moments from the ’80s always set to “Walking On Sunshine” or a bare half-dozen other songs—have such currency: Some elements burn into the brain, while others just slip away. If Eastwood’s film were executed better, it might have captured the feeling of how the past gets remembered, even when those memories don’t always square with what happened.

Most films fall between the extremes of Jersey Boys and Not Fade Away, and the smart ones choose the approach that best serves the film. Richard Kelly’s Donnie Darko, for instance, grounds its fantastic elements in a depiction of late-’80s Virginia suburbia that feels like it was torn from an old snapshot. It nails the look, and goes beyond the expected Reagan-era hits for its soundtrack, including a half-forgotten gem from The Church. Wet Hot American Summer features an early-’80s environment of feathered hair and turned-up polo shirts, but any exaggeration feels right for the comedy around it. Last year’s The To Do List was almost distractingly good at capturing the early 1990s. I sometimes thought more about where the production designers acquired their vintage Trapper Keepers than I thought about the jokes.

When I first started seeing films set in a decade I remembered, however, I realized how easy it was to get it wrong. 1998’s The Wedding Singer turns every tacky 1980s detail up to 11. It’s the past as burlesque. I’m not that film’s biggest fan, but the angle suits the material. Less easy to forgive: 200 Cigarettes, Rock Star, Glitter, and their ilk, which take a similar approach to the decade, throwing in a few era-specific details and playing them up, but mostly treating it as a place to play dress-up. Don’t get me started on Hot Tub Time Machine, which walks a talented cast through one easy “Weren’t the 1980s crazy?” cliché after another. I lived there. It wasn’t like that.

Getting the past right isn’t just a matter of avoiding glaring anachronism. (Though 15 years later, I still get annoyed at a Man On The Moon scene set in the late 1970s that has a Ms. Pac-Man machine visible in the background.) It isn’t even about getting every detail right. (Though going to the obsessive extremes of Stanley Kubrick’s stitch-by-stitch summoning of the 18th century in Barry Lyndon is one valid approach.) It’s about understanding what living in those times felt like for the characters, and conveying that feeling to those watching. It also means not treating it as a joke, or an insignificant element, a mere matter of adjusting the length of the leads’ sideburns, or the music on the soundtrack. The past is always ready to be re-created, but it’s a task best left to those with a sense of responsibility to a place that can only be visited in art, and in dreams.