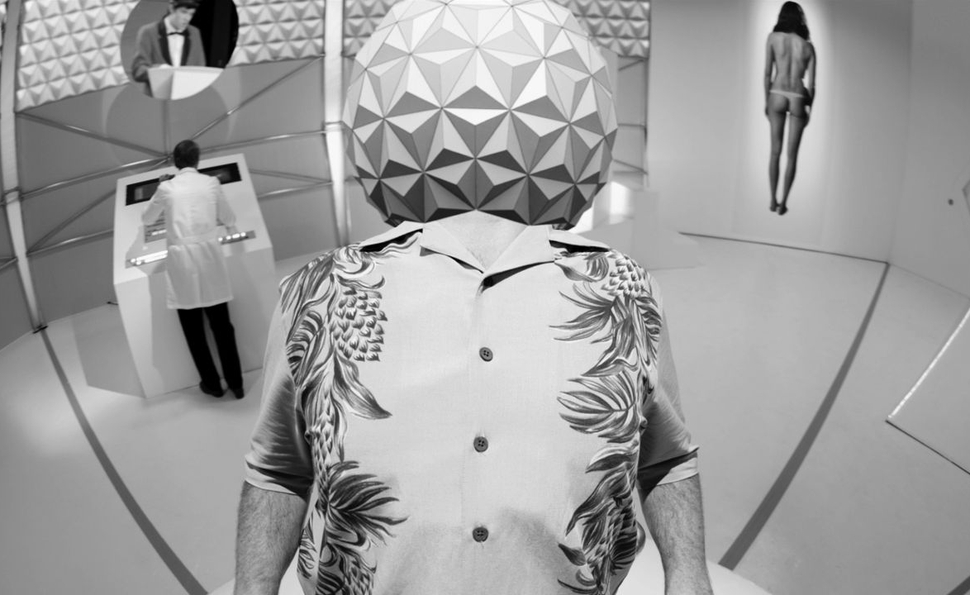 It’s a gloomy night in Scotland. A woman in a white van wanders the streets of Glasgow. She pulls up alongside a man and asks for directions. He suggests a route. Instead of driving off, she keeps the conversation going, then offers him a lift. He accepts.

Neither character in this scene from the new Under The Skin is who they appear to be. The woman beneath the heavy black wig and thick red lipstick is Scarlett Johansson—and beneath her movie-star looks lurks an alien, hunting men she needs for a fiendish, otherworldly purpose. The man she picks up isn’t an actor at all; he actually is a guy the production found on the side of the road in Scotland. He doesn’t realize he’s speaking to Scarlett Johansson—much less Scarlett Johansson playing an alien. As far as he’s concerned, he’s lucked into a ride from a lovely, flirtatious young woman, and he’s behaving accordingly.

Through most of Under The Skin’s first half, Johansson’s unnamed character repeats this ritual over and over, collecting victims—almost all played by non-actors—and luring them back to her lair. To make these sequences possible, director Jonathan Glazer built a new camera system, hidden in the dashboard of Johansson’s van, and filmed Johansson’s unscripted interactions with the men. More than a simple marketing hook, this clever formal trick adds innumerable dimensions to the film’s story of a stranger in a strange land, and marks Under The Skin as the pinnacle of a recent wave of hidden-camera cinema.

Glazer is far from the first director to surreptitiously turn a camera on unsuspecting victims and share the results with the world. Allen Funt’s Candid Camera was a popular television mainstay for more than 50 years after its introduction in 1948. Funt even took the concept to theaters with two adult-themed Candid Camera movies in the 1970s: What Do You Say To A Naked Lady? and Money Talks. As the franchise continued, imitators appeared. NBC and ABC had Dick Clark’s TV’s Bloopers & Practical Jokes. One of the Fox network’s earliest hits was Totally Hidden Video; when it debuted in 1989, it scored the highest ratings of any show on the channel to date. And Ashton Kutcher cemented his own celebrity by pranking other movie and TV stars on MTV’s Punk’d.

Most hidden-camera shows on television followed the same basic template: A host, often in front of a studio audience, tosses to pre-taped packages of skits and stunts. Hidden-camera films have complicated the subgenre by adding a narrative, and making the targets into unwitting participants in increasingly complicated stories.

The first of this current wave of hidden-camera films had its roots in hidden-camera television, though strictly speaking, it didn’t conceal its recording devices. Most of the non-actors in 2006’s Borat knew they were being filmed; they just didn’t know what they were being filmed for. They believed they were being interviewed by a dim-witted Kazakh journalist for a documentary about America. In fact, they were being duped by British comedian Sacha Baron Cohen, who was using the guise of a dim-witted Kazakh journalist to provoke them into confessing their ugliest beliefs about race, anti-Semitism, and sexuality. Cohen’s targets wrongly assumed no one in America would ever see the footage, and they said and did things they surely wouldn’t have for a camera from the local broadcast affiliate. In a sense, Cohen hid his camera in plain sight—in a camera.

Borat, directed by Larry Charles, was actually Cohen’s second attempt to turn his hit television series Da Ali G Show into a film. The first, 2002’s Ali G Indahouse, abandoned the show’s confrontational aesthetic for a traditional narrative about its title character becoming a member of British Parliament. It flopped on both sides of the Atlantic, in large part because Cohen’s comedy worked best when using fictional characters to uncover hidden truths in the real world. Borat restored the hidden-camera-style pranks and became a massive hit.

Cohen recycled the same format in 2009’s Brüno, but by that point, he was becoming the victim of his own success. His techniques demanded anonymity, which lured his victims into a false sense of security. As Borat became a blockbuster, Cohen became a movie star, and a less effective cinematic con man. Similarly, as Johnny Knoxville and the crew from Jackass became famous, they had more and more difficulty pulling off the kinds of pranks that had become the bread and butter of their MTV series. To counteract Knoxville’s celebrity, they invented Irving Zisman, a cantankerous old man the comedian could play beneath a layer of impressively believable latex makeup. After appearing in sketches in the first three Jackass movies, Zisman got his own spinoff in the Borat mold—last year’s Jackass Presents: Bad Grandpa—which connected a series of hidden-camera stunts (like Knoxville hitting on, then performing for, the clients of a male strip club) via a narrative about the crotchety septuagenarian on a road trip with his foul-mouthed grandson.

Knoxville and Cohen’s fearless antics made for amusing viewing, but they approached their narratives as more of a necessity than an opportunity to break new storytelling ground. But their massive financial success paved the way for a series of hidden-camera movies that used Cohen and Knoxville’s technical creativity to blend reality and fiction in far more interesting ways.

In 2007’s Great World Of Sound, directed by Craig Zobel, actors Pat Healy and Kene Holliday play two men who unwittingly participate in a music-industry scam known as “song sharking”—tricking aspiring musicians into paying them to record their songs instead of the other way around. Zobel’s bold idea was to use actual musicians in the film without their knowledge. He built a fake record-company office, complete with gold records on the walls, and placed ads in local papers inviting unsigned talent to come audition, then put Healy and Holliday in the room with them, and filmed the results through two-way mirrors.

Great World Of Sound’s hidden-camera scenes were more than a gimmick; they were integral to the story Zobel was telling. These scenes could have been re-created with actors, but the hidden cameras reveal—in a way no re-creation could—just how easily this type of scheme can be pulled off, and how desperately people crave attention and stardom. Healy and Holliday’s performances were also significantly enhanced by the construction. The real discomfort they felt as actors tricking these amateurs mirrored the discomfort their characters felt as scouts tricking the musicians into funding their song-sharking scheme. Rather than playing two guys in an awkward position, they are two guys in an awkward position.

One reason Healy and Holliday’s marks are so compelling to watch is because they don’t know they’re being watched. Most characters in fiction films do; though they maintain the illusion of the fourth wall, people always play to cameras in conscious and subconscious ways. As a result, hidden-camera films offer an ingenious workaround for the observer effect, the fundamental principle of physics, technology, and social sciences that states that the act of observing something automatically and fundamentally alters it. For example, when you try to measure an object’s temperature with a thermometer, the temperature of the thermometer itself alters the object in tiny but measurable ways.

Though it’s harder to quantify, when you stick a camera in someone’s face, they change as well. Under hot stage lights, they might sweat or fidget more than they normally would. Shy people speak less than in a casual conversation; attention whores grow more animated. If the act of going to the movies is inherently voyeuristic, then hidden-camera films offer a particularly potent strain of cinema, because they invite viewers to scrutinize people who are truly oblivious to their gaze.

A similar motivation drives a hidden-camera movie like 2013’s Escape From Tomorrow. Writer-director Randy Moore shot his story about a Disney World vacation gone horribly wrong in the real Disney World and Disneyland; like Cohen, Moore hid his cameras in plain sight, using high-end consumer-grade equipment to shoot on the Disney property without permission.

Disney would never have let Moore make Escape From Tomorrow at the theme park, because it shatters the company’s carefully cultivated illusion that Disney World is an idyllic utopia. In Moore’s version, that projection of perfection masks a nightmarish underworld of disease, prostitution, and perverse scientific experiments. And yet despite these extravagantly surreal flourishes, Escape From Tomorrow actually feels like one of the most truthful documents of Walt Disney World in history—specifically the people on display beyond the main cast, who had no clue they were being watched.

The hidden-camera sequences in Under The Skin hold a similar power. They ground a ludicrous premise—aliens seduce and entrap Scottish men—in a believable reality, short-circuiting viewers’ natural skepticism. It seems doubtful anyone could be so easily duped into their own death; by showing Johansson’s plan in action in the real world, it proves the method would work. If aliens did walk among us, and did want to prey on horny dudes, this is how they could do it. Johansson is so successful, and Under The Skin portrays her activities so methodically, that the first half of the movie almost feels like a training film for man-hunting extraterrestrials.

The popular culture of the 21st century has been dominated by depictions of “reality,” as audiences have grown increasingly fascinated with tales of truckers, pawn-shop owners, and basketball wives. Great World Of Sound isn’t that far removed from the world of American Idol, a show that also makes entertainment out of musical auditions and the exploitation of unsigned (and occasionally untalented) artists. Many of these shows, from Hell’s Kitchen to Jersey Shore, use hidden cameras to capture their contestants’ most intimate moments.

But where American Idol and shows of its ilk often feel like fiction disguised as reality—with individuals uncomfortably cast as stock types who recur season after season, like the single mom who’s worked her whole life to provide for her family, the teenager trying to overcome the death of a parent, the oddball with a stunning voice, etc.—Under The Skin and films of its ilk represent reality disguised as fiction. Reality TV varnishes the truth with a gloss of slick production, scripted dialogue (“I’m not here to make friends!”), and easily digestible tropes; by holding a two-way mirror up to society, hidden-camera films strip the varnish away to capture genuine human interactions at their most unguarded. Though deployed in the service of fictional stories, some with ludicrous fantasy or science-fiction elements, they often result in portraits of our world that are more authentic than purportedly non-fiction films and television shows.