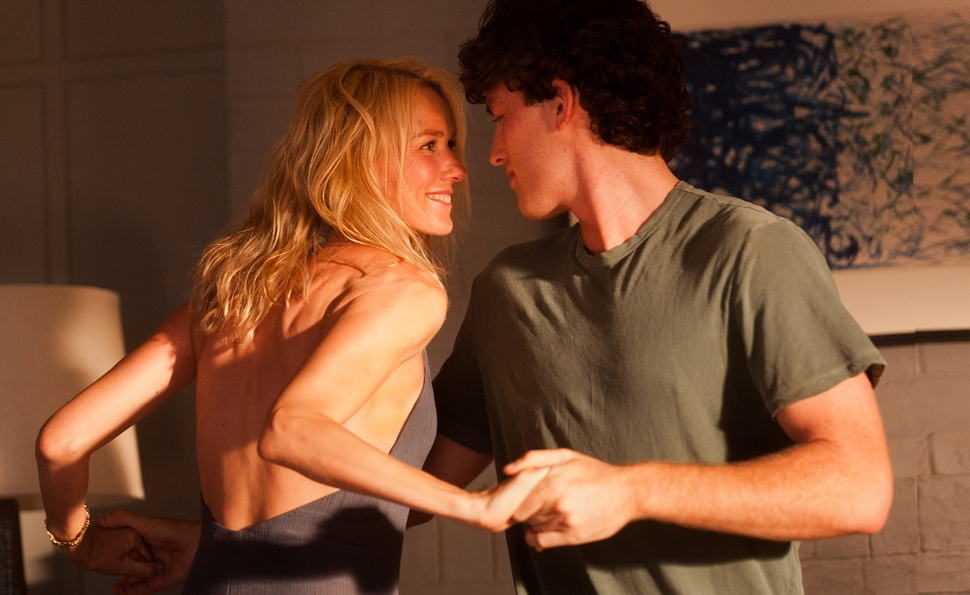 Last year at the Sundance Film Festival, I attended the première of a romantic drama with an impressive pedigree and an intriguing premise. Starring Naomi Watts and Robin Wright, and adapted by Christopher Hampton from a Doris Lessing novella, Two Mothers tells the story of two middle-aged women whose lifelong friendship bleeds over into their close-knit adult sons (Xavier Samuel and James Frecheville), creating a warm but uncomfortably intimate bond between the foursome. When one son begins an affair with the other’s mother, it threatens that foursome—and provokes the other pair to act on their unspoken romantic stirrings.

By about the halfway point of the screening, I started hearing derisive snickers from people around me. I didn’t understand it: Director Anne Fontaine had mostly succeeded in taking a possibly preposterous story—supposedly based on true events—and dared to treat it seriously in order to explore the mysteries of attraction. I went back to my condo after the screening and wrote a positive review, calling Two Mothers “[a] thoughtful, sexy, mature, and (most importantly) non-judgmental examination of potentially tawdry material.” I sent the review off to my editor and went to bed, assuming the mocking laughter I’d heard was an anomaly.

After the film, a viewer asked Fontaine if anything surprised her about watching Two Mothers with an audience. “The laughs!” she said, still a little shocked by the response. “I thought it was [received as] a comedy, more or less. I don’t know what it means exactly.” It means—and we’re surely not alone in thinking this—that this classy/trashy mama drama has got to be the most fun you can have at Sundance. Bring the whole family!

The implication was obvious: Two Mothers (which was later retitled Adore when it briefly hit theaters in September) had foolishly tried to tell its bizarre, “Motherlover”-esque story straight-faced, when clearly everybody involved should have realized it was laughable and behaved accordingly.

This critical reaction repeated itself recently with the release of Jason Reitman’s Labor Day. Though his adaptation of Joyce Maynard’s novel received better reviews than Adore, Reitman adopted an approach similar to Fontaine’s, telling a melodramatic romantic scenario with utter sincerity, an impressive cast (Kate Winslet, Josh Brolin), and a pronounced wistful tone. A majority of critics weren’t biting. “The movie’s a somber affair,” wrote the Boston Globe’s Ty Burr, “but if you see it in the right frame of mind, it’s the guilty-pleasure hoot of the season.” The New York Times’ Stephen Holden praised Winslet, but concluded, “In almost every other respect, this overbaked romantic hokum is preposterous.” The Dissolve’s own Scott Tobias zeroed in on the movie’s now-infamous pie-baking scene between Brolin and Winslet, commenting, “The way it plays so laughably, like a scene from a gussied-up romance novel, fatally damages a drama that never entirely finds its rhythm.” 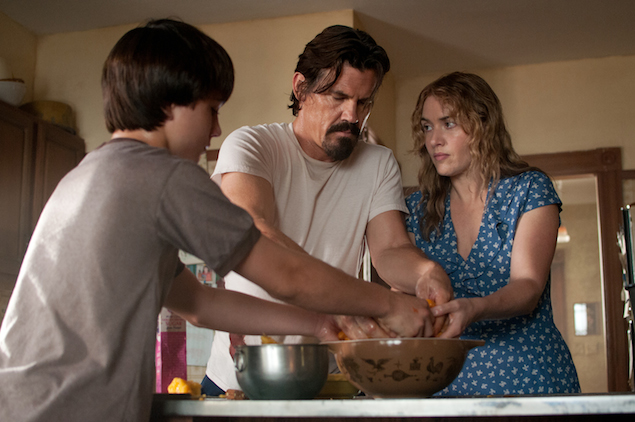 Once again, I responded to a heartfelt, eccentric romantic drama that others chided for being “unintentionally hilarious,” a phrase that popped up a few times in both films’ negative reviews. Seeing Labor Day early at the Toronto International Film Festival, I had my reservations about its sappy finale and belabored flashback scenes, but I concluded that the film was—as I said in my review—a mature, assured examination of an unusual but highly functional family unit, confidently exploring nuanced emotional terrain.

I’m not going to argue that I’m right and my colleagues are wrong about these two movies. Since I’m in the clear minority, I accept that something about the way Adore and Labor Day go about their business speaks to me in a way that doesn’t work for many people. But I am interested in why I gravitate to their sincerity, while others get the giggles. I think there are two explanations, each of which relates to these films’ commitment to examining the nature of love in unusual, admittedly dicey ways.

As a critic, I tend to reward audacity. Usually, this means championing unconventional narratives or enigmatic, so-called “unsympathetic” protagonists. But in the case of Adore and Labor Day, it’s supporting the filmmakers’ willingness to try to understand presumably unrealistic love stories from the inside. As these movies’ negative reviews suggest, this is not the shrewdest way for a director to approach such material: Skepticism and satire would be better, perhaps safer bets. But instead of ridiculing their foolish characters, Fontaine and Reitman show them compassion and meet them halfway. And because of that choice, the solemnity these directors bring to their stories is crucial: Both films adopt sincere, close-quarters perspectives that leave viewers entombed in the same claustrophobic circumstances as the lovers. (It’s telling that neither movie has many supporting characters: We’re intentionally denied a “normal” viewpoint on what we’re seeing, as if these people are test subjects we must study in their natural habitat.)

These movies don’t necessarily condone the questionable love affairs, but they do create an atmosphere where such unlikely love affairs could flourish. In Adore, a secluded Australian community offers few romantic possibilities for these aging women. (Watts’ husband is dead, and Wright’s husband, played by Ben Mendelsohn, neglects her.) Fontaine cuts these women and their sons off from their surroundings, their intense rapport easily crossing the line into something bordering on incestuous. The women know what they’re doing is wrong, but they’re so emotionally starved that they cling to these affairs anyway. Likewise, Reitman positions Labor Day as an ersatz family drama focused on an escaped convict (Brolin) and a divorced, depressed mother (Winslet) he’s holding captive. Most of the film is located within the mother’s cozy home, far away from the outside world.

The earnestness in both films doesn’t mean the filmmakers can’t recognize how  preposterous the stories are. It just reflects the genuineness of the characters’ longings—and the repercussions. (It can’t be coincidence that Adore and Labor Day share a languid, almost dreamlike serenity: The movies’ tone is attuned to the blissful, slightly surreal mindset of new love.) Fontaine understands that Adore’s crisscrossed love affairs are unworkable—to some extent, the characters do, too—but she nonetheless matter-of-factly proceeds forward, wondering how seemingly sensible people sabotage themselves through foolish decisions. (That’s why she was blindsided by the Sundance reception: For her, the movie is a tragedy.) As for Labor Day, the idea of a rugged, handsome fugitive hooking up with a curvaceous, lonely mom is the stuff of pulp-romance-novel trash, but Reitman opts for trying to find the soulfulness beneath the snark-ready premise. These films aren’t unintentionally hilarious—they’re intentionally, almost defiantly opposed to finding the humor in the scenarios. In their quiet way, Adore and Labor Day argue that certain romantic dilemmas are ludicrous—unless we’re the fools trapped in them. 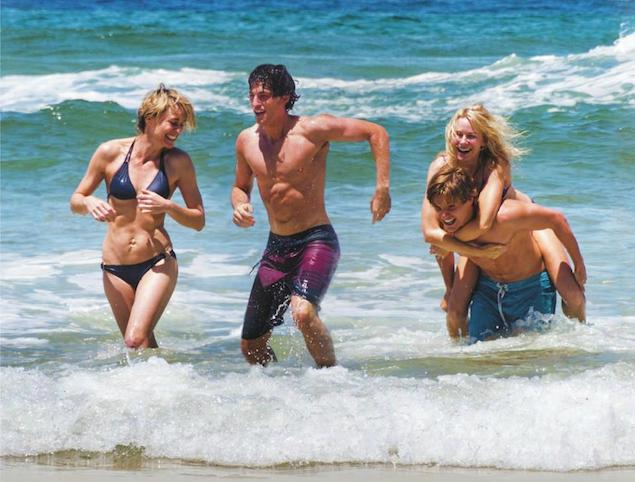 The other reason I’m oddly drawn to these two movies is that I value their counter-narratives. Most romantic comedies or dramas view new love as a beautiful, exciting, or playful endeavor—the emotions tend to be positive and fulfilling. But Adore and Labor Day take a different tack: In these films, love is an expression of other desires or unresolved feelings. And I think that’s more accurate to the way love often plays out in the real world.

With Adore, Fontaine uses the affairs to critique the close bond between Watts and Wright. (Although both characters are straight, outsiders speculate that they might be lesbians. And in a sense, each bedding the other’s son is an excuse for them to be intertwined in each other’s lives without having sex themselves.) But Adore also reaches into other murky terrain: the sometimes-uneasy Oedipal relationship between mothers and sons, and the fears of aging women who are perceived to lose their desirability and worth as they get older. Love and sex in Adore are almost never about love and sex—they’re about darker, more existential needs. Similarly, Labor Day’s love story is really about the search for family, and the urgency to create artificial replicas when the real thing shatters. Winslet’s son narrates the movie, with good reason. It isn’t just the adults who are willfully plunging headlong into this odd arrangement—it’s also her son, who desperately wants a surrogate father, as well as a new husband for his despondent mom.

In both movies, the melodramatic treatment is partly a way to turn the consciously straightforward romances into broader metaphors for other human cravings. Love is rarely as twisted as it’s portrayed in Adore and Labor Day, but the films nonetheless offer a necessary counterargument to the simplistic, sunnier view of passion we often see on the screen, whether in the assembly-line Nicholas Sparks tearjerkers or Hollywood’s broad meet-cute rom-coms.

Adore and Labor Day have major flaws: Despite their bold tonal strategies, they occasionally struggle to sustain their mood, both become frustratingly nonsensical as they reach their finales. But for me, those stumbles are worth enduring to witness romantic dramas that strike different notes than we’re accustomed to hearing. And Adore and Labor Day are two of the stranger, more memorable love stories of the last year, lacking the leavening sweetness and humor of Her, the crushing candor of Before Midnight, and the bare-bones poetry of Blue Is The Warmest Color. Instead, they were just unapologetic old-school melodramas, a most unfashionable genre.

Modern audiences have difficulty with such movies: We’ve become conditioned to sneer at their ripeness and roll our eyes at their blatant symbolism and unguarded emotions. (Apropos of this tendency, Criticwire ran a post chronicling all the reviews that mocked Labor Day’s pie-making-as-lovemaking scene.) At a time when some will still dismiss Douglas Sirk’s work, completely missing the deeper themes underneath the pretty surfaces, Fontaine’s and Reitman’s admittedly far less accomplished melodramas don’t have much chance of being accepted on their own terms.

But while I’d never argue that my take on Adore and Labor Day is somehow better than my colleagues’, I would suggest that the laughter these films risk provoking is at the service of something worthwhile: a realer, more bracing discussion of the workings of the human heart. Hokey, I know—but a sentiment that’s still worth taking seriously, even in imperfect packages.