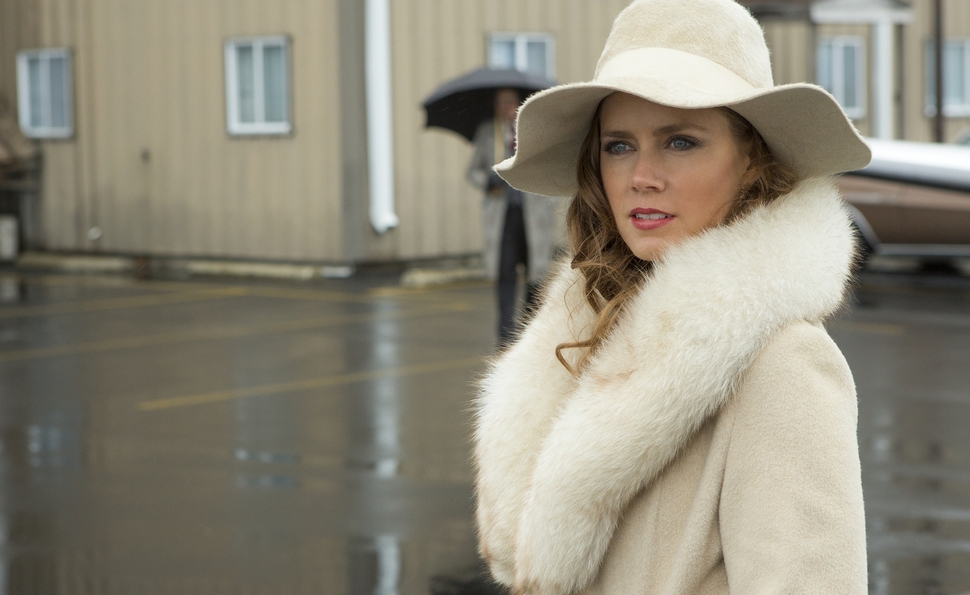 The fake reinvention of American Hustle

Note: This piece discusses the endings to American Hustle, Silver Linings Playbook, and The Fighter.

At a Washington, D.C. pre-release screening of American Hustle in December, writer-director David O. Russell told the crowd that he considers the movie to be the final leg of his thematic “Trilogy Of Reinvention,” after 2010’s The Fighter and 2012’s Silver Linings Playbook. The Glover Park Group, a lobbyist mega-firm, had organized the private showing. Among the audience for a film that turns wide-scale political corruption into popcorn entertainment: former senator and current MPAA president Chris Dodd, and at least one of Mitt Romney’s campaign staffers. American Hustle is based on Abscam, the late-’70s/early-’80s government sting that caught elected officials taking bribes from phony Arab sheiks, and not much about politics has changed since then. There’s still an illegal deal happening every minute, still a revolving door of rich donors with agendas who can find an audience with public servants, still a collective shrug from all involved parties. The funniest part of the screening was during the Q&A, when MSNBC’s Chris Matthews thanked Russell for including a sympathetic politician in his movie—never mind that both the character (a fake Camden, N.J. mayor played by Jeremy Renner) and his real-life counterpart (former Camden, N.J. mayor Angelo Errichetti) took bribes.

But if there’s one thing Washington knows, as acidly chronicled in Mark Leibovich’s 2013 bestseller This Town, it’s the art of the reinvention. Do bad things, get caught, make an act of cooperation and remorse, and before too long, reach your happy ending with nary a scratch. Since that’s exactly the trajectory followed by the heroes of American Hustle, it makes sense they would know best when they say every con needs to be sold “from the feet up.” To the extent that American Hustle does depict reinvention, it’s of this political variety—the kind where, after prevailing over ugliness with more ugliness, the heroes of the piece are allowed to retreat scot-free, carrying big gobs of cash.

That’s what happens at the end, after con artists Irving Rosenfeld (Christian Bale) and Sydney Prosser (Amy Adams) have finally succeeded in clearing their debt to Bradley Cooper’s FBI agent by—of course—conning him. The third act, which has no real-life corollary with Abscam, is a fun and in many ways entirely appropriate way to end a caper flick. Russell noted as much during the Q&A, saying he couldn’t make a con movie without conning the audience a little. But it also highlights one of the key elements that divides American Hustle from Russell’s first two reinvention movies: namely, the absence of reform and redemption. Irving and Sydney say they’ve given up the hustling life, but they do so by hustling, and there’s never a second in the film when they would rather be doing anything else. 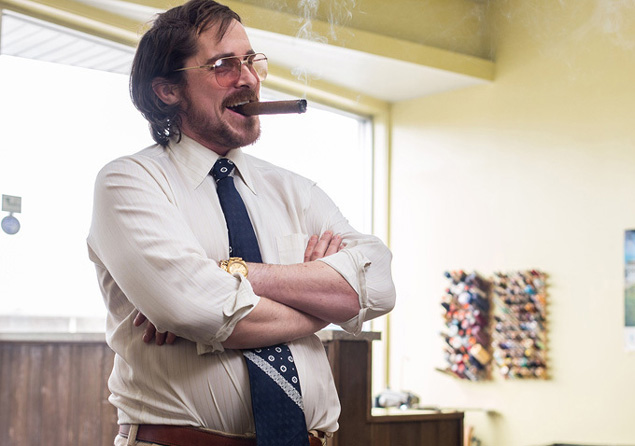 It’s entertaining to watch slimeballs get slimed, but spinning the film as a reinvention tale along the likes of Russell’s far superior previous ones doesn’t feel like a genuine artistic statement, so  much as a choreographed step in Russell’s own comeback campaign. After more than a decade of displaying his bad temper and untrustworthy individuality, the director can use his recent trilogy as a Hollywood handshake, to signal that he is now in the mass-appeal Best Picture game. And American Hustle is the greasiest of the greasy palms: a banter-filled crime caper, with period costumes, freakish hairstyles, Scorsese-style voiceovers, and the mob, starring bad people who are also good people when it counts. Were it not for the occasional flight of mischief (the stream-of-consciousness rambling monologues, the singing along to the soundtrack, the long tracking shots that barrel into Amy Adams’ face), it would be impossible to tell Russell made this film. That may be the point.

Of all the odd-duck independent directors to have come of age in the 1990s, Russell was at one time the oddest: an outsized, volatile personality whose films radiated levels of idiosyncratic intensity not always matched by their quality. After the well-received comedies Spanking The Monkey and Flirting With Disaster, Russell made the audacious, remarkable Gulf War treasure hunt Three Kings, using Steadicams and washed-out film stock, and the equally audacious but not as remarkable screwball philosophy thesis I Heart Huckabees, which made no sense, but looked great doing it. Like all artists, Russell was fiercely protective of his visions, but he tended to show it more than most. He exchanged fisticuffs with George Clooney on the set of Three Kings, and deliberately acted like a child while making Huckabees, complete with a filthy temper tantrum aimed at co-star Lily Tomlin that went viral.

Even in ego-crazed Hollywood, behavior like that doesn’t win a person many friends. The director went six years without releasing another film. (Though, had Russell’s hustling financiers not bailed on his political satire Nailed, Matthews might not have been so quick to praise him for sticking by politicians.) The one-two punch of The Fighter and Silver Linings Playbook gave Russell a new lease on Hollywood life, demonstrating that he had settled down into box-office success and prestige pictures. But within recognizable casings of reinvention—the all-American boxing movie, the all-American romantic comedy—were the kinds of prickly, intensely personal elements Russell has become known for. The Fighter, in its depiction of a physically powerful but emotionally meek man who can’t escape the callous family that feeds his brother’s crippling drug addiction, turned the “we stick together” working-class-clan movie archetype on its head. Silver Linings Playbook made its romance almost an afterthought to the inner demons of the violent, mentally disturbed Pat (Bradley Cooper), whose outbursts bear a strong resemblance to some in Russell’s own past. (Russell’s son also has bipolar disorder.)

In both films, also, there is real, messy reinvention from someone who genuinely wants to do the right thing. Dicky (Bale), the fallen boxer turned crack addict in The Fighter, eventually sobers up and helps his brother. Silver Linings Playbook ends with a silly dance contest, but Pat and his partner Tiffany (Jennifer Lawrence) really care about recovering from their illnesses and easing the stress they’ve caused their families. But the leads of American Hustle, proudly rotten scammers who think nothing of promising false loans to desperate people, have no affliction other than greed. They are weasels for the sheer hell of being weasels. They aren’t genuine, so their reinvention isn’t genuine, either.

Contrary to what Irving Rosenfeld might believe, in the movies, it’s possible to spot a forgery—especially when it’s stacked next to the real thing. The difference is that the leads of The Fighter and Silver Linings Playbook are ultimately willing to leave behind large parts of themselves in order to become better people. Think of Dicky’s dreams of personal glory, his brother’s deep sense of moral obligation to his family, Pat’s obsessive love for his wife. But Irving and Sydney never face any challenge of a similar magnitude. They spend the movie concocting schemes within schemes, rejecting the straight and narrow—or in the case of Cooper’s Richie DiMaso, the permed and narrow. Even when they get backed against a wall and could really use the audience’s support, Richie—the interloper, the goddamn fed—is the one who maintains the moral high ground. When they finally give up vice in the closing moments of the film, it feels out of character, which is not the sign of a convincing arc. 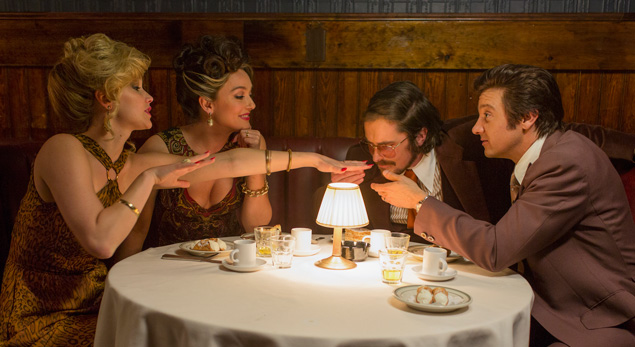 In a movie year rife with portrayals of money-grubbing sleazoids that don’t even try to humanize their heroes, the artificial empathy and forced redemption of American Hustle stands out in a sour way. It plays like a bid for the campaign ticket of mass-market respectability, and, as The Atlantic’s Spencer Kornhaber also points out, it comes off like another brand of bullshit. Yes, there are no purely good or bad guys, and the world is gray, as Irving says. But as written by Russell, Irving and Sydney don’t deserve a happy, clean ending. Nor does the short-tempered but justified Richie have a character-driven reason to crawl away from the film with his tail between his legs. The Wolf Of Wall Street, The Bling Ring, and Spring Breakers were about the same kinds of people who inhabit Russell’s film, but Martin Scorsese, Sofia Coppola, and Harmony Korine had the good sense to recognize that their characters were beyond redemption. Their films became more complete once the audience could laugh at, not identify with, the hollow grifters at their centers.

The Fighter and Silver Linings Playbook were David O. Russell films hiding inside Hollywood ones. American Hustle is the opposite. It’s so gauzy and extravagant that every outsized, Russell-lite character cancels out another one. What’s left is a political convention: a snazzy pageant with big flashbulbs that has little to do with the actual candidates. There is no emotional truth here, merely the sweet stench of the con.