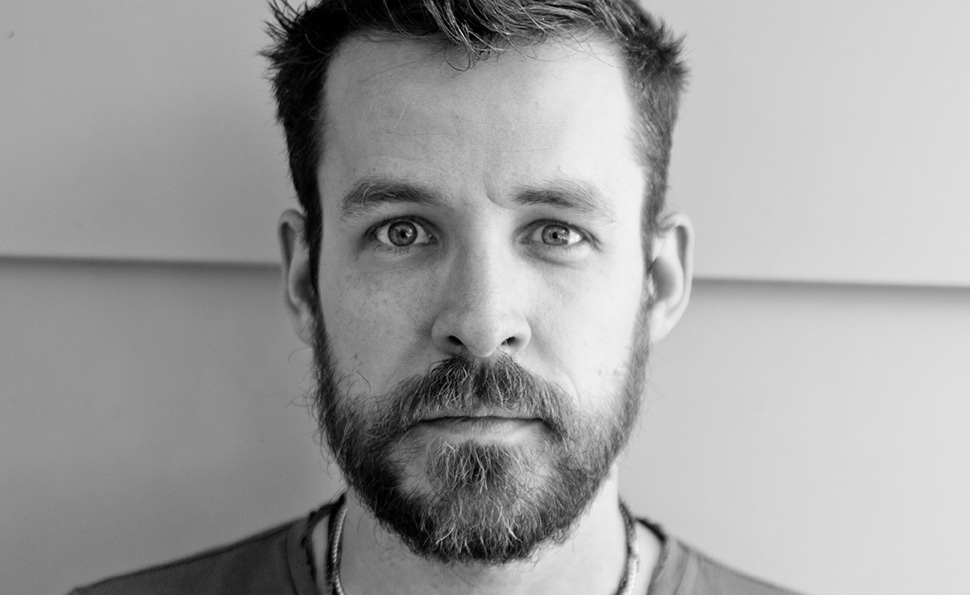 Matt Fraction’s professional journey as a comic-book writer began on the weird fringes of the profession, and in some ways, he’s never left. Fraction first attracted attention in 2006 with the graphic novel The Five Fists Of Science (co-created with artist Steven Sanders, with a cast of characters that includes Mark Twain, Nikola Tesla, and Thomas Edison), and Casanova, an ongoing title written by Fraction, drawn by Gabriel Bá and Fábio Moon, and featuring the reluctant super-spy Casanova Quinn, whose adventures bring him into contact with one out-there science-fiction concept after another. Though the mainstream beckoned in the form of steady work for Marvel, Fraction brought his taste for oddness with him. Highlights of his tenure there have included a revival of The Immortal Iron Fist (with co-writer Ed Brubaker and artist David Aja) that doubled as a tribute to classic pulp heroes; a long, memorable run on The Invincible Iron Man (with artist Salvador Larroca) filled with concepts from the cutting edge of modern science; and the form-pushing, still in-progress Hawkeye (with art primarily by Aja). Fraction’s current work includes both the indie hit Sex Criminals (with artist Chip Zdarsky) and Satellite Sam, drawn by colorful comics veteran (or, in Fraction’s words, “goddamn national treasure”) Howard Chaykin.

For his Compulsory Viewing choice, Fraction picked A Matter Of Life And Death (also known as Stairway To Heaven), a 1946 fantasy romance set against the backdrop of World War II, from the filmmaking team of Michael Powell and Emeric Pressburger. Collectively known as The Archers, Powell and Pressburger turned out one classic film after another, including 49th Parallel, I Know Where I’m Going!, A Canterbury Tale, The Life And Death Of Colonel Blimp, The Red Shoes, and Black Narcissus. All were made with a striking visual sense and a deeply felt humanism, but maybe none quite so beautiful or deeply felt as Fraction’s choice. David Niven stars as RAF pilot Peter Carter, who, in the film’s opening sequence, conducts what he believes will be his final conversation with American radio operator June (Kim Hunter). Bailing out to certain death, he’s surprised to awaken on a beach where he soon meets June in the flesh, and continues a romance begun over the radio. He also meets Conductor 71 (Marius Goring), an otherworldly emissary who claims Peter’s escape from death was a matter of oversight. The films switches perspectives from Earth, shot in gorgeous Technicolor, to the afterlife, shot in stark-but-pleasing black-and-white. (Famed cinematographer Jack Cardiff, then at the beginning of his career, accomplished the effect by processing Technicolor in a way that drained it of its color.) The film brings a light touch to the weightiest of matters.

The Dissolve: When did you first see A Matter Of Life And Death?

Matt Fraction: Almost a year ago. Like, a year ago to the day. Not to be weird or melodramatic, but there was a show in Dublin that I went to last year over my anniversary. I had seen either the Jack Cardiff documentary Cameraman: The Life And Work Of Jack Cardiff, or was watching Mark Cousins’ The Story Of Film, and there was a bit about A Matter Of Life And Death, so I had downloaded it and put it on my iPad to watch on the flight, just thinking it looked pretty. You can’t beat that Technicolor, you know? So knowing nothing about it other than it was a Powell/Pressburger film that I had not seen, I watched it on this flight over to Ireland.

The Dissolve: So you were watching that first scene on a plane? Did that enhance it?

Fraction: Not from any sense of danger, but it’s just an amazing scene. It’s a great opening. First off, how weird is that faux It’s A Wonderful Life [animation]? This is infinity, this is the cosmos, and that kind of bizarre sweet opening. I remember being struck by the richness of the color and that there was clearly a wall of fire about a foot away from David Niven’s face. Like, that ain’t CGI. And how amazing that was, and how surreal and otherworldly the air-traffic control tower was lit, and those weird things that the lights are on, which sort of look like spider legs. The way they light Kim Hunter, and she’s in shadow, and she’s not, and her lips seem to be glowing—it’s like the most remarkable first five minutes of film I can think of.

The Dissolve: I can’t think of a film that makes an audience care about characters so instantly. It helps that David Niven is charming, as is Kim Hunter, but just throwing viewers into that situation is such an immersive touch.

Fraction: Yes, and Niven’s almost stream-of-consciousness dialogue. He just crushes the monologue. Like, “I wrote a poem and I wish I had written that one, but I didn’t so—oh no, you know, tell my mother I loved her.” It’s just like, the most amazing meet-cute of all time—my favorite cinematic meet-cute. Hands down. And then it’s black and white, and we’re in the afterlife, and it’s an entirely different film. Suddenly it’s like a fucking Fritz Lang movie.

The Dissolve:  In a film full of inspired touches, that’s the most inspired: Making the afterlife black and white, and not an unpleasant place to be, but making Earth just so rich and vibrant, and having Conductor 71 say, “One is starved for Technicolor up there.” That touch is the film in miniature to me.

Fraction: I think it’s my favorite moment in the movie. I can’t pretend to be a student of the French New Wave, or even a particularly large fan, or well-versed in it, but the biggest take-away I got from it in my professional life is that sometimes the rule that there are no rules is a great rule. And just to have that credo—that weekend in Dublin, I wrote Sex Criminals #1, and I think Marius Goring turning to the camera and saying, “One is starved for Technicolor up there” is what gave me the confidence to just have the character turn to the camera and say, “You know what? The jokes are coming, stick with me.” I can’t point to it definitively and say, “Oh yes, I remember thinking, ‘Ah! I’ll have her talk to the camera like he did.’” But it’s just that, like, “Oh right, it’s this kind of story. We can do whatever the fuck we want. We have heaven, and this infinite staircase, and all this other… You know what? Yeah, go for it. Just go ahead and have the character address the camera.” There’s that moment in Band Of Outsiders where Anna Karina turns to the camera and says, “What could possibly go wrong?” or whatever the line is, with that spark of, “Oh yeah, fuck it. It’s a movie. Have fun.”

The Dissolve: Had you seen a lot of The Archers’ films before this?

Fraction: I had not. I had seen Tales Of Hoffman and The Red Shoes and The Life And Death Of Colonel Blimp, and that was it. I’ve been trying to bang through them. And Criterion, as we speak, is having a 50-percent-off sale. Barnes & Noble did that a while back, and I got Black Narcissus and Colonel Blimp on Blu-ray, which has another great Roger Livesey performance. What a fascinating pair [The Archers] were.

The Dissolve: And one of those partnerships where once they broke up, they were still friends. That isn’t too common. Sometimes it’s the official story, but it seems to be the real story with those two.

Fraction: And it’s a product of a system so unlike Hollywood that it couldn’t have happened anywhere but the U.K. 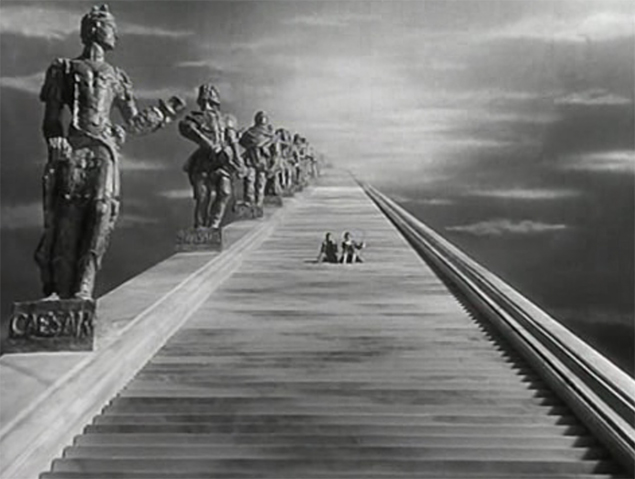 The Dissolve: So why should everyone see this film?

Fraction: Oh, gosh. First off, it’s one of the most beautiful two hours you’re gonna spend looking in your life. Jack Cardiff exquisitely composed and shot it. It will make you pine for Technicolor. I wish movies still looked like this. Just as a sensory experience, just as a thing to look at it, it’s remarkable. The sets are practical. That staircase was real. They built that staircase. I appreciate its whimsy and lightness of touch. It sort of reminded me of an Ernst Lubitsch picture. It was so delicate and whimsical! And it feels so far ahead of its time—the way it’s handled, the way it’s written. They clearly go out of their way to blur the line, where we don’t know if this is really happening or not, you know? This just could be traumatic brain injury? How?

The Dissolve: You can go into this film as a firm believer in the afterlife, or as a confirmed atheist, and still find it speaking to you.

Fraction: And as a confirmed atheist, at no point—yes, it is a very delicate handling of that idea. I remember when Lost ended, people were furious. I remember thinking, like, “Really?” So the time-travel, the smoke monster, the immortal dark and light guys, that’s fine, but the minute you have to imagine an afterlife… To me, it’s like the same gland‚ it’s the same imagination. An afterlife is just as fantastic as time-travel and the smoke monster that changes shape, but other people are like, “How dare you make me appreciate an afterlife! That could never happen! My suspension of disbelief is ruined!”

The Dissolve: Not to get too philosophical, but one thing that’s always buttered me up to the notion of an afterlife is the way it’s usually used to make life on earth feel less consequential than eternal life. But here, it’s the exact opposite.

Fraction: It’s absolutely the opposite.

The Dissolve: It’s postscript—the life we live now is the real life.

Fraction: It’s the reward, or the show. Life is the big show. And I love how they went out of their way to be inclusive. To show us so many different people and cultures and races. Probably not great that they wrote “Muhammad” on the base of that one statue.

The Dissolve: Right, but you never see his face, so maybe it’s less offensive?

“It’s one of the most beautiful two hours you’re gonna spend looking in your life. It will make you pine for Technicolor.”

Fraction: I don’t know. [Laughs.] Run that by standards and practices at Comedy Central and see. But it reminded me a lot of A Life Less Ordinary. Which, I think I am the only person who likes that movie in the world.

Fraction: I have a weird fondness for that film. I think because it just so much burned down the success of Trainspotting. But its magical realism really just gets me. The way they think of all the Americans chewing gum and like, “All right, there we go, let’s have everyone drinking Coca-Cola. We’re Americans!” [Laughs.] It’s great, and so sweet, and… Oh, what’s the opposite of cynical? Is there a platonic opposite of cynical?

The Dissolve: Open-hearted is what I would use.

Fraction: Yeah, that’s this. That is this movie.